The roar from the V8 at full noise has me screaming with excitement, but my best mate is speechless and rapidly losing the colour from his face.

The thrills are coming thick and fast as we belt around the back blocks, getting thrown from side-to-side around several roundabouts before the force of the acceleration drives me back into the seat like nothing I’ve ever felt before.

My senses are already on full alert, but nothing could prepare me for what happens next. The car suddenly swings its tail out to one side, and just as quickly snaps back the other way with a cacophony of tyre-frying fury. Squashed shoulder-to-shoulder against my mate with our knees tucked into our chest, we slide like a Japanese drifter perfectly into our driveway. I look out the side window to watch the cloud of blue smoke catch up to us and drift past with an eerie serenity that completely defies the debauchery that created it. We unfurl ourselves as we stretch out of the back seat and almost trip over the seatbelt trying to get out.

I can’t remember what I actually got for my 10th birthday, but this memory is clearly more significant and indelibly imprinted than anything I unwrapped. See, it was the first time I had been in the back seat of a Porsche. My old man had borrowed a 928S and took me and my mate for a roller-coaster ride of a lifetime.

It was also probably the last time I’ve been in the back seat of a Porsche because, honestly, even a 10-year-old would find it difficult to sit in the rear of a 911. That is until now, as I stretch out in the rear of a Panamera Turbo while belting down the autobahn from Munich to the Austrian Alps, where Porsche is unleashing its four-door, four-seat executive sedan/hatchbacky thingy on the world’s motoring press for the first time.

While the 911 will remain Porsche’s most important model line, with the Cayenne SUV providing profit, and the Boxster and Cayman line-ups adding critical mass, the Panamera is no less significant. It’s the first time the company has stretched (pardon the pun) into the sports-sedan segment, promising a car that delivers all the hallmark performance attributes of a 911 with the practicality and comfort of a Cayenne. And one that can tap into the rich vein of cashed-up new markets such as China, Russia and the Middle East.

Strangely, Porsche considers the Panamera more as an alternative to the likes of the BMW M5, Audi RS6 and Mercedes-Benz CLS63 AMG, rather than the genuine upper-class limousines (7-Series, A8, S-class), with the exception of the Maserati Quattroporte. Strange because, there’s no doubt about it, the Panamera is a big car.

It’s hard to call it a beautiful car, but it’s easily identifiable as something from Stuttgart and it definitely has presence. Measuring 4970mm and riding on a wheelbase of 2920mm, the Panamera looks awkward from the full side view, and not even the optional 20-inch alloys fill its wheelarches.

But being just over two metres wide and standing just 1418mm tall, as I move around the car it starts to look better, and from the front three-quarter view, there’s a hint of Ferrari in its long, scalloped bonnet. The hunchbacked, hatchback rear is hardly a work of art, but Porsche wanted to do something outside of a traditional three-box sedan and ensure the Panamera retains some key Porsche styling DNA. 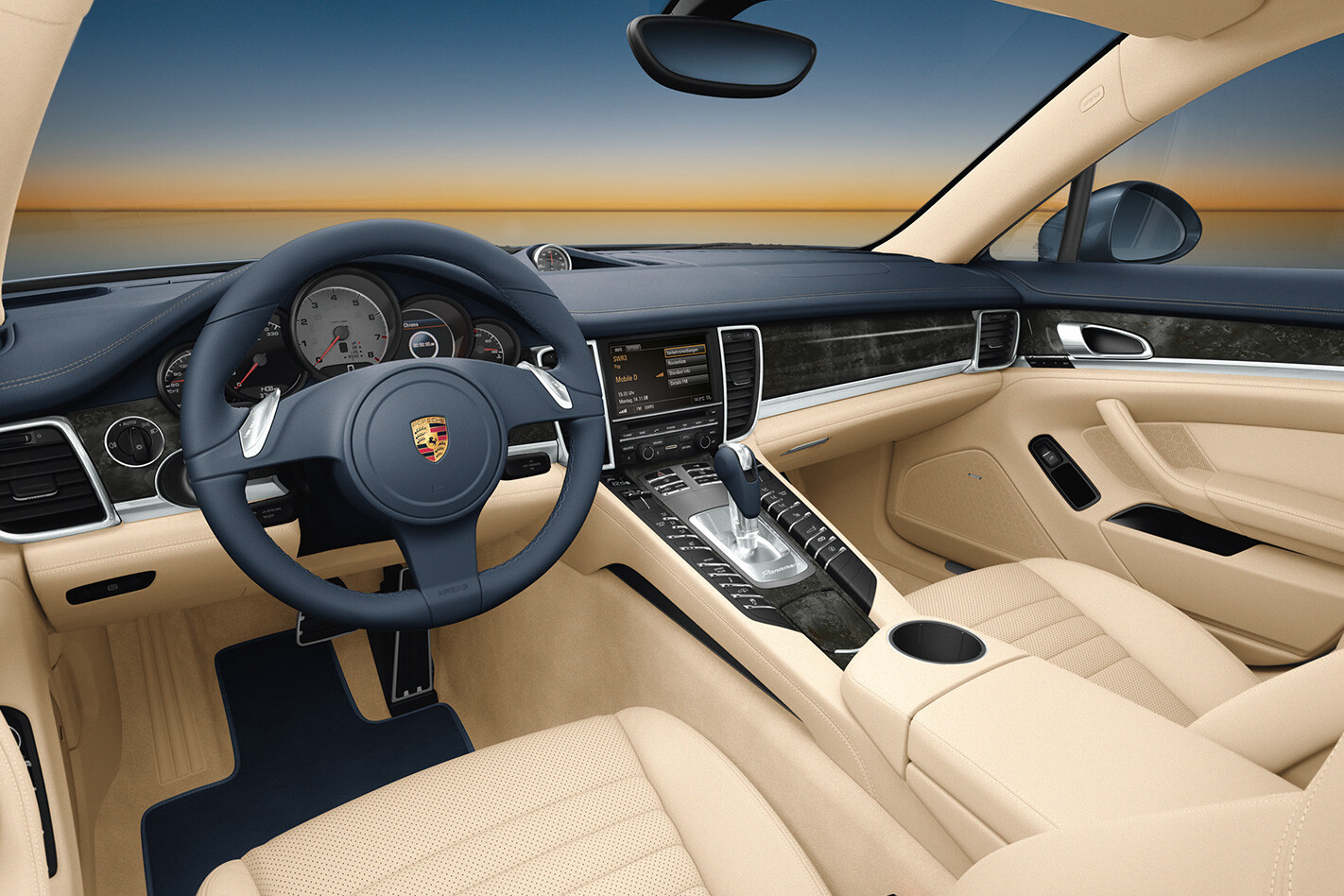 But there is one beautiful view of the car, and that’s from the driver’s seat. Drop into the cabin and you immediately understand the concept of the Panamera a lot better, and it becomes evident that the exterior styling is dictated by interior packaging requirements. The heavily bolstered seat sits low and inboard from the door sill, but is cocooned by the dominating centre console that features an array of buttons laid out like a designer mobile phone around the PDK shifter.

While rivals have moved to convoluted menu-based systems such as BMW’s iDrive, Porsche believes its drivers want the controls to be simply at a touch of a button, and that must be commended. The layout looks classy with its chrome highlights and is also logical, with the chassis functions cascading down one side and vehicle functions along the other.

Even though the centre console achieves its intended purpose of making you feel like you’re in a cosseted sports car, there is an amazing amount of space inside the Panamera’s cockpit. Headroom is generous, even with a sunroof fitted, and the view through the windscreen over the classic-curved front mudguards is grand indeed.

But, unlike the 911 and Boxster models, that’s not the only seat in the house to be in. Even from the passenger seat, it feels like you’re being chauffered – or possibly a co-driver in a World Rally Car – as it can be positioned so far behind the B-pillar, you look over the driver’s shoulder. But the back seats are what truly sets this apart from any other Porsche. 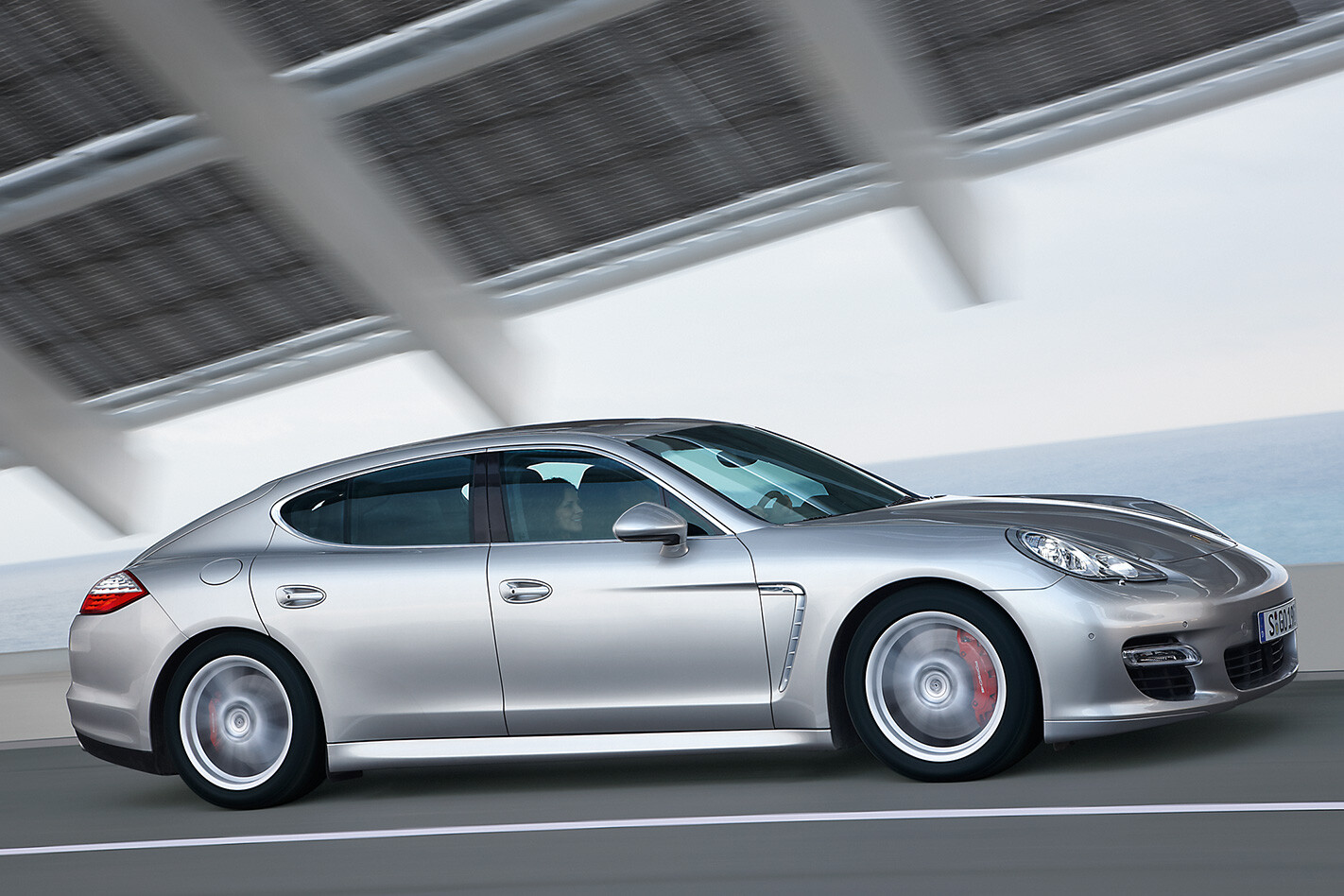 While it’s not quite as generous as a 7 or S-class, there’s a lot more space than you think is possible when looking at it from the outside. The individual rear bucket seats are just like the fronts, with heavy side bolstering in the cushion and backrest, and while they’re reasonably comfortable for short, sharp bursts, they are a bit too stiff and upright for long journeys over a couple of hours.

But there’s plenty of leg, head and shoulder room, individual controls for the air-con, and you won’t miss anything outside thanks to good vision through the shallow side windows and a reasonable view out the front courtesy of the theatre-style positioning of the back pews.

While the cabin is more generous than you’d expect, from any seat the Panamera does feel like a big car on the road, particularly in congested European cities and, from the driver’s point of view, it suffers issues with rear visibility through the small window aperture and over its protruding shoulders in the side mirrors.

But really, who’s going to be looking backwards when you’re driving a car capable of rocketing to 100km/h in 4.0sec? It has a top speed of 303km/h and has lapped the Nurburgring in 7:56 – just 11sec slower than a 911 Turbo. The Panamera is all about going fast in style and comfort, no matter if it’s on a twisty alpine pass or barrelling along an autobahn. 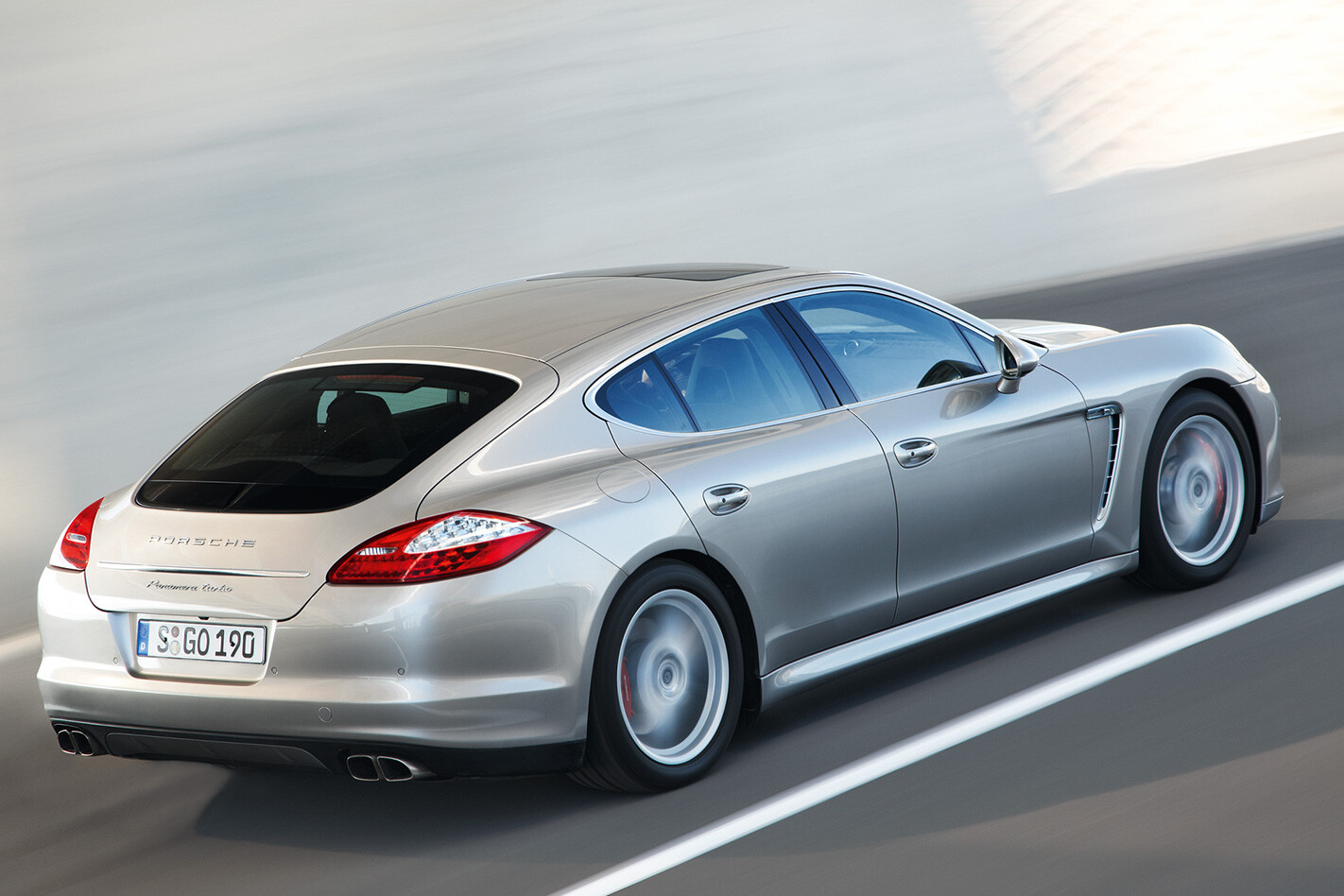 It does both exceedingly well. In fact, in any environment the Panamera drives like a real Porsche should, except with a level of refinement and an air of grace unlike any other model in its range. Around town, it is comfortable and amazingly quiet. With the air suspension in standard mode, it rides like a conventional limousine, with deliciously delicate damping that soaks up any corrugations and helps mask its bulk.

The speed-sensitive power steering is also noticeably lighter than any other Porsche at slow speeds, which helps as we manoeuvre through a series of small ski villages before crossing the border to Austria.

But, as the road turns into a slithering section of Alpine bends and the invitation arrives to open the taps on the 4.8-litre twin-turbo V8 and unleash the full force of 368kW and 700Nm, the Panamera quickly proves its point. At the same time, though, it highlights the Panamera’s one weakness – weight. With the suspension in standard settings, the Panamera pitches and bobs around as it tries to control 1900kg.

Sport mode noticeably tightens things up, but it remains comfortable at any speed and certainly offers the best balance between ride and handling. With the optional Sport Plus Chrono package – which lowers the car by 25mm, stiffens the dampers, tightens the steering, quickens the gearchanges and increases peak torque to 770Nm via an overboost function – the Panamera stretches itself beyond being a rapid executive express. It suddenly feels like a Porsche. 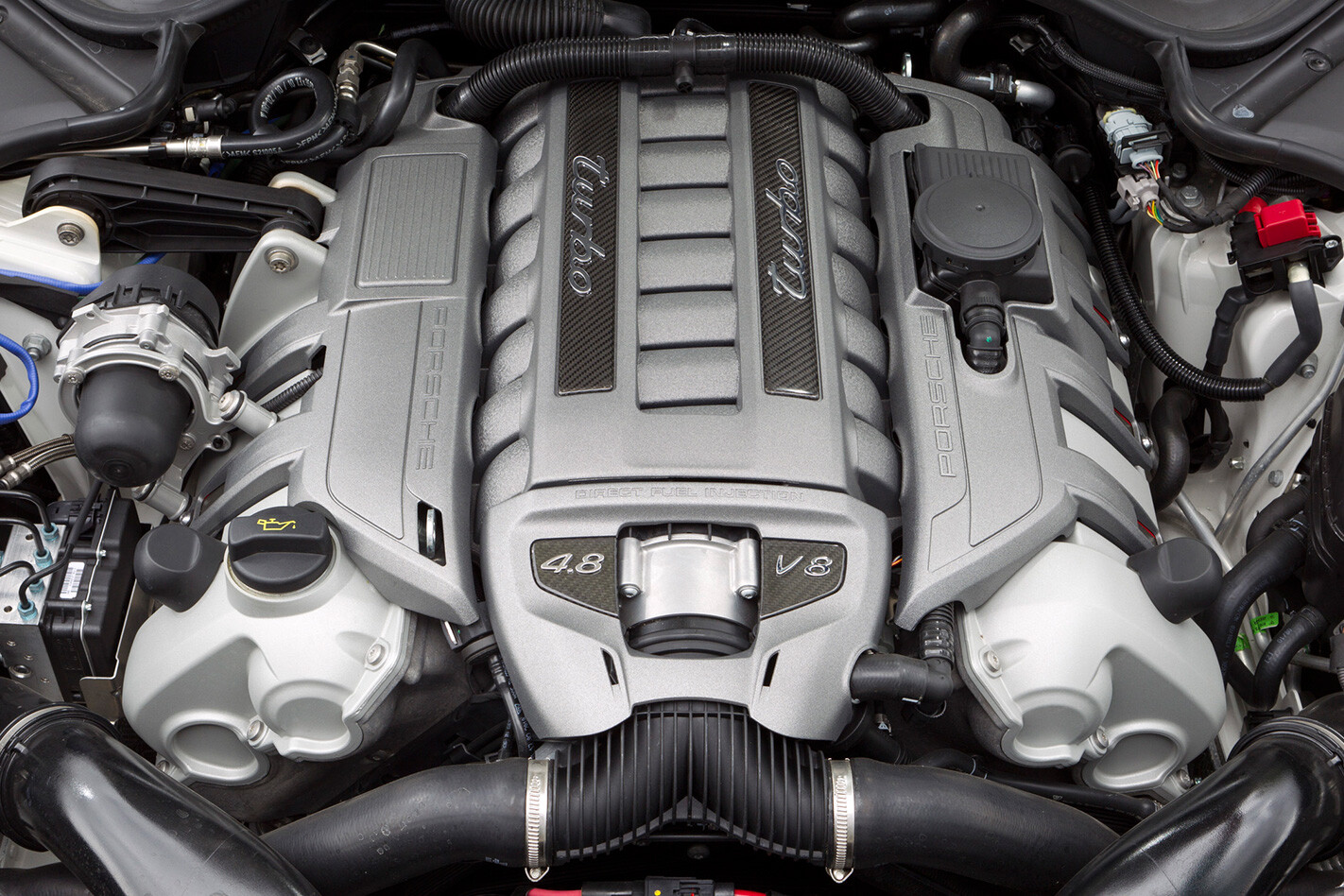 On a long, flowing section of road nestled between craggy snow-covered peaks, the Panamera is in its element, carving through the corners at a rate that defies belief for such a large sedan. While the steering is not quite as communicative as a 911’s or a Boxster’s, it still tells you exactly where the front-end is and points to where you want to go.

In tight corners, it does tend to understeer and, as we barrel into a bend way too fast and wash off speed with a hefty amount of trail-braking, the rear steps out slightly. Both aspects, I suspect, are factors of its weight more than anything else. But the high-tech all-wheel drive system and optional carbon-ceramic brakes fitted to our Panamera Turbo keep it all in check with a stealth-like cloak of security.

Even with the PSM system on, the Panamera Turbo lights up all four wheels as I power it out of an opening radius, uphill hairpin, which proves that Porsche has drilled its sportscar DNA deep into the Panamera’s soul, and also the brutal strength of its engine. With specially-developed Michelin Pilot Sports at each corner measuring 255/45 across the front and 285/40 at the rear, it takes a shedload of urge to turn them into blue smoke. But it can, and it did.

Like the multi-faceted nature of Panamera’s chassis, the V8 has more than one card in its deck. At sensible Australian highway speeds, the direct-injection 4.8 burbles along, utilising its extra-tall seventh gear at just over 1200rpm, which Porsche says helps it return less than 9.0L/100km on the open road. Bury the accelerator into the firewall, however, and the Panamera transforms from a gentleman into a rugby league player. There’s a moment of stillness as the seven-speed PDK chooses the right gear and the turbos build-up boost, and then all hell breaks loose in a furious rage of force-fed V8-powered thrust. On German autobahns, the Panamera lifts its way into 200km/h territory without raising a sweat and comfortably cruises at 240km/h with minimal wind or tyre noise.

But any German saloon can do that. Where BMW, Audi and Mercedes all call the fun police at 250km/h, the Panamera is open for business. And Porsche’s 303km/h claimed top speed is entirely believable because even as I pull back at 270km/h when an Audi drifts into the fast lane a kilometre up the road, the thing was still pulling as hard as it was at 200km/h.

It truly is an amazing car for the way it drives and the sheer depth of brilliance in the way it transforms from downtown limousine to cross-country missile, to lithe hill-climber. I’m positive Porsche will shift the 20,000 it hopes to each year on its badge alone. Dismissing the Cayenne (and 914) as anomalies, Porsches have always been beautiful, head-turning machines.

But I can’t see the Panamera being considered as gorgeous as a Maserati Quattroporte or as glamorous as an S-class. It’s out there on its own, but only a company as confident as Porsche could execute it so successfully.

Perhaps it’s now time to give my 10-year-old son an experience he’ll never forget. At least he won’t have his knees pressed into his chin.