More than just the flagship of Jeep’s Grand Cherokee range, it’s the world’s most powerful SUV, and, if you ignore Tesla’s Model X, the world’s fastest. 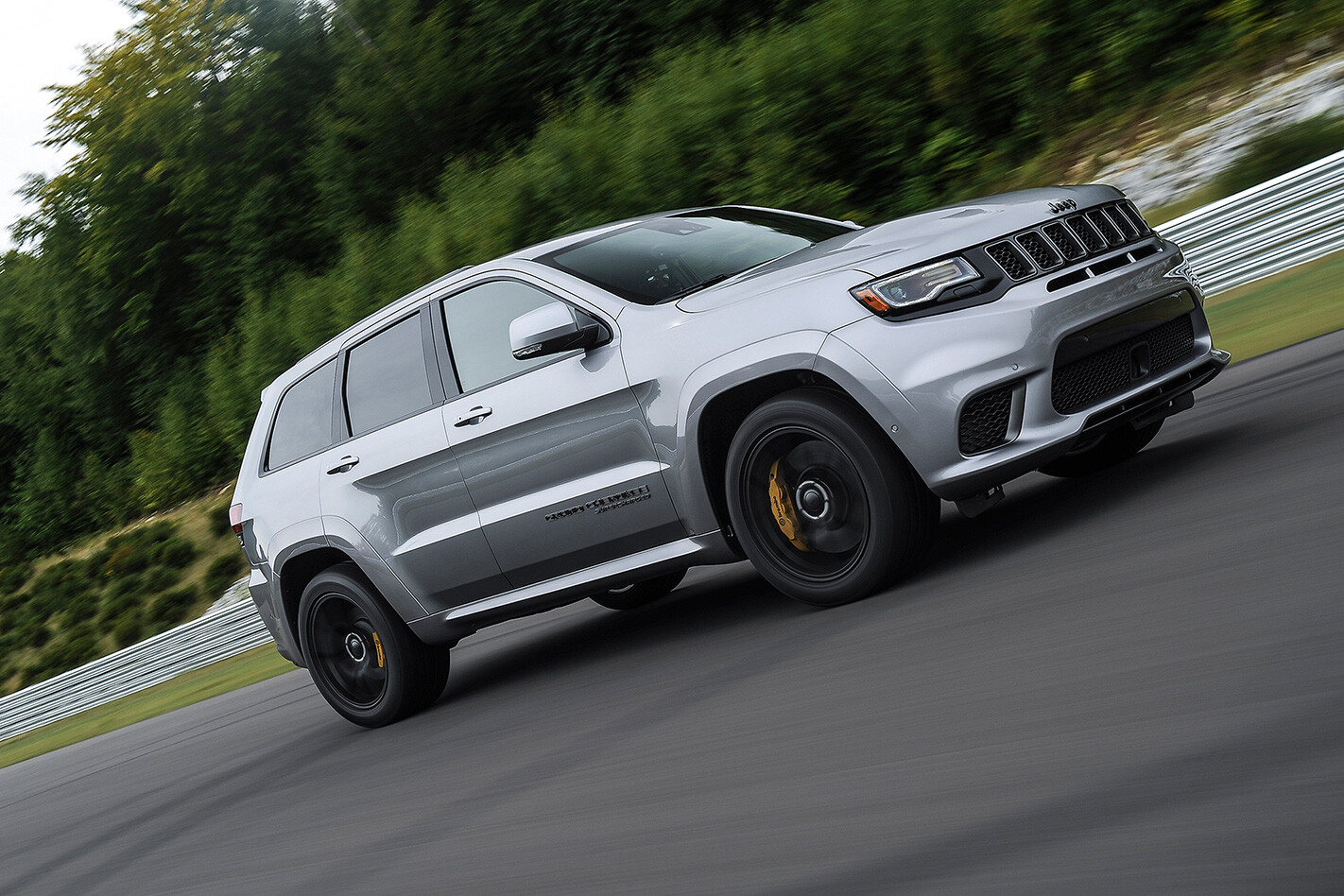 Trackhawk arrives in Australia in December, and Jeep thinks it may snare sales from buyers who would otherwise have bought an HSV GTS or top-spec FPV Falcon. So this was a chance to see if there may be a basis for that thinking. Oh, and who could say no to a seven hundred horsepower anything?

Outwardly, a 522kW SUV with no real off-road ability would seem slightly nonsensical, but the Grand Cherokee Trackhawk is so well engineered, such a hoot to drive, and demands so few compromises for its outrageous performance, it may just change your mind. Think of it as a supercharged muscle car with an elevated driving position that carries five and their luggage, and it starts to make sense … sort of. MINUS: Having to be on first-name terms with the bloke at your local servo; lumpy, restless low-speed ride; steering inert at moderate speeds; explaining its purpose to haters.

IF YOU think the old “where do babies come from?” question brings a challenging conversation to have with a small child, give yourself an uppercut. It’s nothing compared to explaining to a curious kid about the rise of the ultra-performance SUV. The correct answer is more like: “Silence, my child! Buckle up and prepare to have your tiny soul rearranged as I deploy seven hundred of Satan’s most unhinged horses!”

Okay, you may not speak in a God-like tone when kicking the Jeep Trackhawk where it loves it most, but I promise you will not sound like your regular self. Things change when you drive Jeep’s beast. Your walk becomes a strut. Your head may wobble, just a little. OUR drive starts by pointing the bluff, more air-hungry snout sedately towards the Interstate out of Maine, in the northeast corner of the USA. It’s a chance to see how well the Trackhawk does the daily stuff, and what compromises come with the Grand Cherokee’s transition into the World’s Most Extreme SUV.

Not surprisingly, the low-speed ride is pretty lumpy, and the steering, no thanks to the massive 295-section front Pirelli P Zeros, is a bit inert at the straight-ahead, without much nuance or detail just off-centre.

The powertrain, though, does docility superbly. There’s a resonator to minimise blower whine on a light throttle, and the exhaust flaps keep things to a peaceful burble as you stroke it around. The shifts from the reworked eight-speed auto in default mode are slurred and unobtrusive, and as we settle into a 120km/h highway lope, the wind noise is well contained, and surprisingly, there’s minimal vocal intrusion from the tyres. This thing does family cruising without an issue.

Then we turn off down a gently twisting backroad, through the woods heading towards New Hampshire. There’s a chance to bury the throttle, and it’s like we’ve driven into a war zone. The blown Hemi erupts straight off the bottom, and cannons up through the rev range with an enraged fury. There may be blower whine, but you’ll struggle to hear it over the thundering exhaust note. It’s even more percussive than the sound from HSV’s LS9; more old-school street muscle than the more strident, motorsport-inspired intensity of the GM engine. Pluck gears if you want, but the auto’s mapping, even in Sport (with Race still up your sleeve), is suitably aggressive. This thing may weigh 2433kg, but it forgets that once on the move, so the kick-down acceleration is properly savage. It may not feel quite as demonic in the 80-120km/h zone as an AMG GT C or Porsche 911 Turbo, but I suspect the difference is marginal, and something like BMW’s X5 M now languishes in a performance category below.

At a brilliant, wildly undulating private racetrack in New Hampshire, the Trackhawk is a hoot for the handful of laps it will cop before the brakes and tyres start to hate you. Set it to Race mode, to almost fully disarm the ESC, get the adjustable Bilstein dampers nipped down hard, and bring in ultra-fast shift mapping that thumps each ratio home with more back-jolting ferocity than anything this side of a Lamborghini Aventador S. 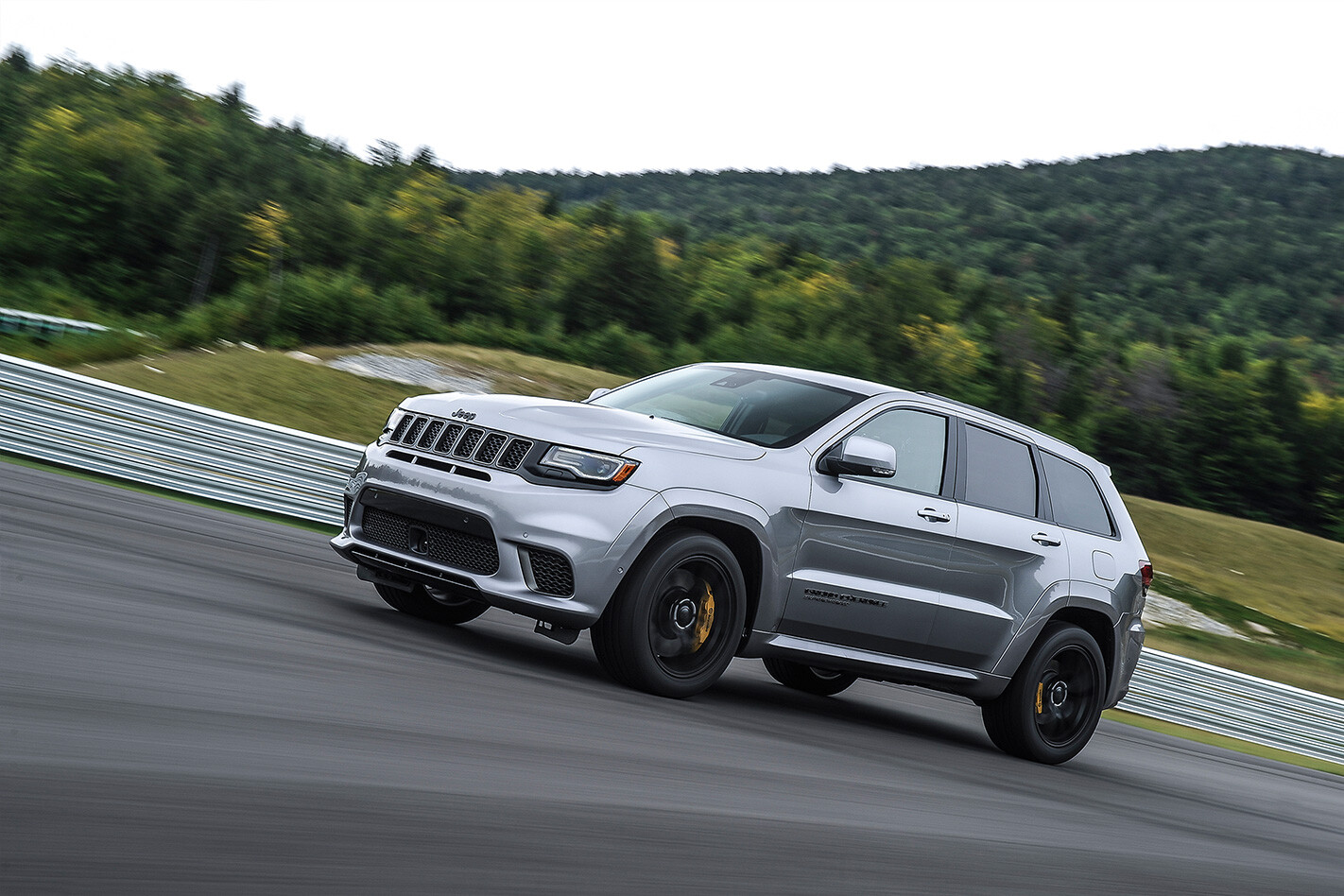 Then drive it like a giant all-paw hot hatch. Turn in early with plenty of trail-brake to get the rear pivoting and minimise understeer, then power down hard; with 70 percent of drive sent to the rears in Race mode, it hooks up eagerly and bolts off with just a hint of squat. The steering comes good on track, and the huge Brembo brakes hang in manfully, up to a point.

As a novelty act, it’s great fun, like ballroom dancing with a silverback gorilla. But as dad told son earlier, will anyone actually take the Trackhawk to trackdays?
But let’s also be clear: the Trackhawk is no over-engined mutant. It’s more like that very loud band room you first set foot in – your first reaction is, “Whoa! Ear bleed!”. But then, after a short acclimatisation, the Trackhawk quickly starts to form a more cohesive whole. Yes, you can mount any number of arguments against Jeep’s flagship, but let me attempt a case “for”. Your partner favours an elevated driving position. Yet you wish you could own a muscle car; maybe a blown Mustang, but your family requirements calls for five seats and a generous cargo area. And you can’t afford a $290,000 Porsche Cayenne Turbo S.

Still, plenty of people won’t understand the Trackhawk. But in a world on the verge of being swamped by eco-weeniness; where we’re being worn down by incessant messages of efficiency and autonomy, surely it’s something to celebrate. It’s like one massive middle-finger to the movement that’s sweeping over us; a defiant, supercharged stand of obstinacy and outrageousness that, oddly, elevates it to a position of relevance.
So in creating perhaps the world’s most pointless SUV, Jeep has actually delivered a vehicle we need now more than ever. Trackhawk’s engine is lifted from the Dodge Challenger Hellcat, so it drips with motorsport-derived toughness. It runs a forged-steel crankshaft, forged-alloy pistons, powder-forged conrods, and alloy heads fitted with hollow-stem, sodium-cooled exhaust valves. The supercharger runs at a max speed of 14,600rpm to deliver full boost of 11.6psi.

Its twin-screw rotors are coated with a mix of polyamide and other nano resins to enable tighter clearance between the rotors. It’s a beast of a donk; its output comfortably eclipsing the 474kW/815Nm made by the same-size (and also supercharged) GM-sourced LS9 fitted to the GTS-R W1.