Look, we’re not going to try to talk you out of getting the manual version of the new 1.5-litre MX-5 anytime soon.

But fact is, if you can’t avoid the ol’ P-R-N-D you’ll be glad to hear the six-speed auto version is more or less on the money as well. But if there is a choice in the matter, don’t go telling everyone, particularly us, because we’ve got a long list why the manual is still the one to get.

For a start, the auto is $2000 more on both Roadster and GT versions. But even more pressingly, it’s significantly slower than the manual. Mazda makes no 0-100km/h claim for the auto 1.5-litre MX-5, but it might add, we estimate, as much as half a second to the manual’s 8.5sec claim.

When we’re talking 96kW and 150Nm (which, in fairness, isn’t as modest as it sounds in a car weighing just over a tonne) straight-line speed is not something you want to give away easily. The auto also sips 0.3L more than the manual’s 6.4L/100km, although we admit that’s no biggie. Neither is the fact the auto MX-5 is 23kg heavier, but we suppose it’s of note in a car where the sun visors are wafer thin to cut back the grams.

Perhaps the most convincing reason of all to go the manual is it’s truly a sweet gearbox – light, buttery and satisfying to use. Combined with the rorty, revvy and enthusiastic engine, it goes a long way to keeping the grin intact despite the fact the MX-5 is, in 1.5-litre guise, hardly explosive in a straight line. But if the reality is auto MX-5 or nothing, it’s hardly the end of the world, either.

The tiny torque converter moves smoothly from a stop without the jolt of a twin-clutch, so it’s quite nice in traffic. But slot it into Sport mode and, under full throttle, a pluck of the plasticky steering wheel paddle reveals a surprisingly swift shift.

Hammer the brakes and the auto MX-5 will blip swiftly enough as you grab lower gears, too. Of course it’s not as crisp or alert as a twin-clutch and there’s nary a crack or a fart on upshift, and no crackling on the overrun. There are no special acoustics here. 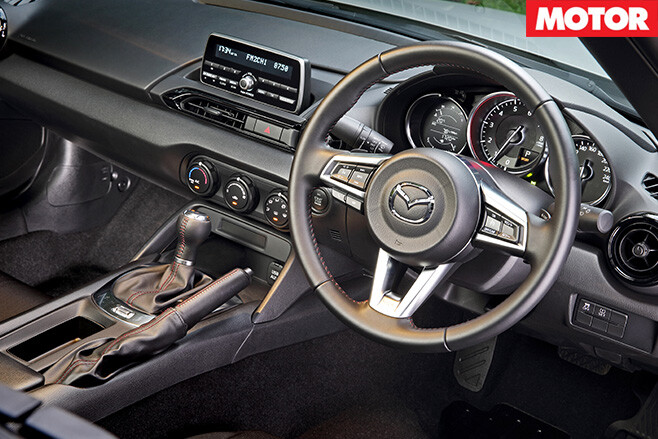 Interestingly, the MX-5 auto and Toyota 86 auto share the exact ratios, but we weren’t able to confirm if in fact they're the same transmission. Like the 86’s the MX-5’s auto is also obedient to the point where weirdos can bounce off the 7500rpm limiter all day if they so wish.

But mostly, rather than obstructing the MX-5 driving experience, the auto tries hard to get in the mood. You can still belt along a twisty road able to soak up the ND MX-5’s engaging and fun, softly-sprung, low-grip chassis, without the gearbox screwing it all up. The manual is still far better, of course, but for one-legged readers, the auto is at least a half-decent proposition.