Have the Series II revisions to the Navara’s coil-sprung rear end made it any better for carrying heavy loads?

Along with a new model in the dual-cab 4x4 range and some spec changes, the rear suspension was revised for what Nissan says is “more refined ride and handling with improved lateral stability, especially when carrying a load in the cargo area or towing”. 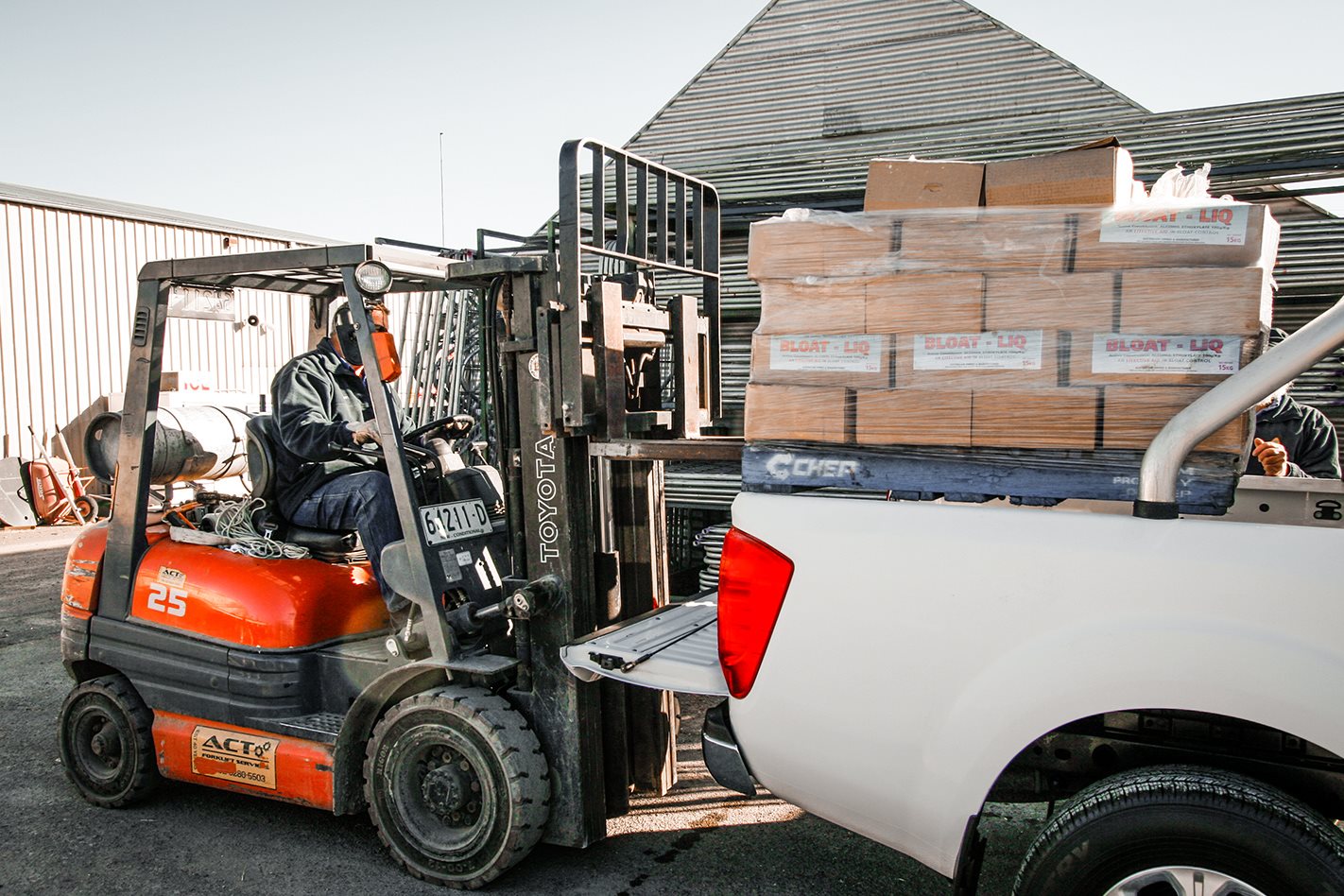 In what was unfortunate timing, the changes were announced just after we had conducted and published a seven-ute tow and load test (see ‘On the Job’), which saw the Navara disappoint. Nissan said it had made the changes off the back of customer feedback, among other things.

Given the changes we thought it only fair to retest the Navara, at least its ability to cope with the same payload we used in the original test – namely 800kg in the tray plus driver, passenger and other payload additions such as the towbar (so effectively a maximum payload).

IN ITS pre-Series II iteration the Navara didn’t feel all that good suspension-wise, even when unladen. The then-called NP300 didn’t ride any better at the rear than competitor leaf-sprung utes, nor was the front-to-rear suspension match particularly well sorted.

Among other things the front-end felt noticeably underdamped and, on some undulating country roads, would pitch uncomfortably up and down as if the whole car was hinged around the rear axle. Owners of the D22 Navara that predated the D40 will know the feeling well. 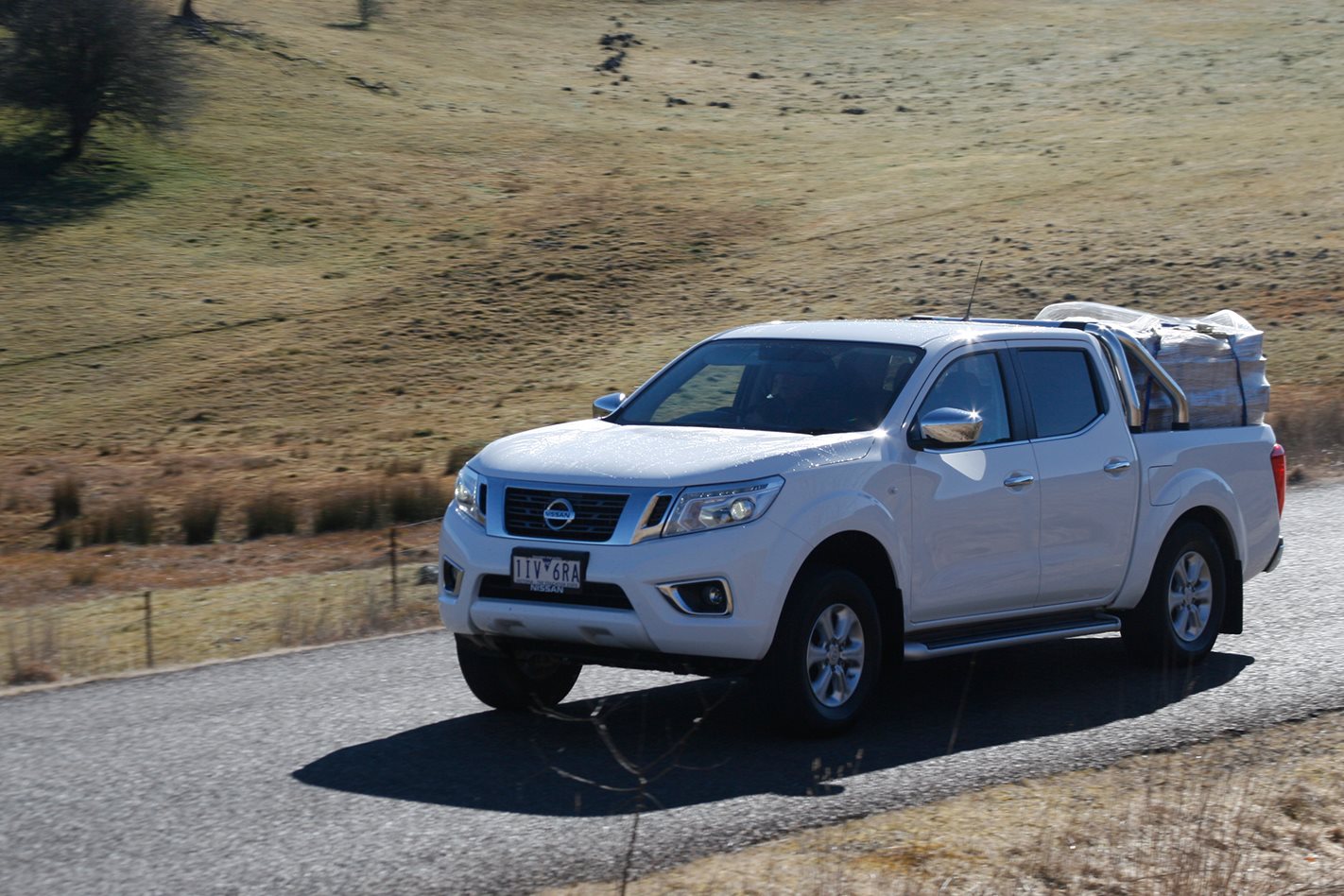 The good news is that the changes to the Series II have addressed the unladen ride and handling. The front-to-rear suspension match is far better and the Navara is noticeably more composed and tidy than it was before. Being smaller and lighter than many competitors, notably the Ranger, Colorado, BT-50 and D-Max, it feels quite sporty as far as dual-cab four-wheel drives go.

Loading 800kg into the tray shines a different light on the changes. When loaded, the rear end drops a noticeable 105mm, just as it did before the Series II changes.

When originally tested (pre-Series II) the rear end dropped 100mm, with the slight difference perhaps due to the fact we couldn’t move the load as far forward as we wanted due to interference with the sports bar – or the difference could be due to the respective age and previous use of the two test vehicles in question. 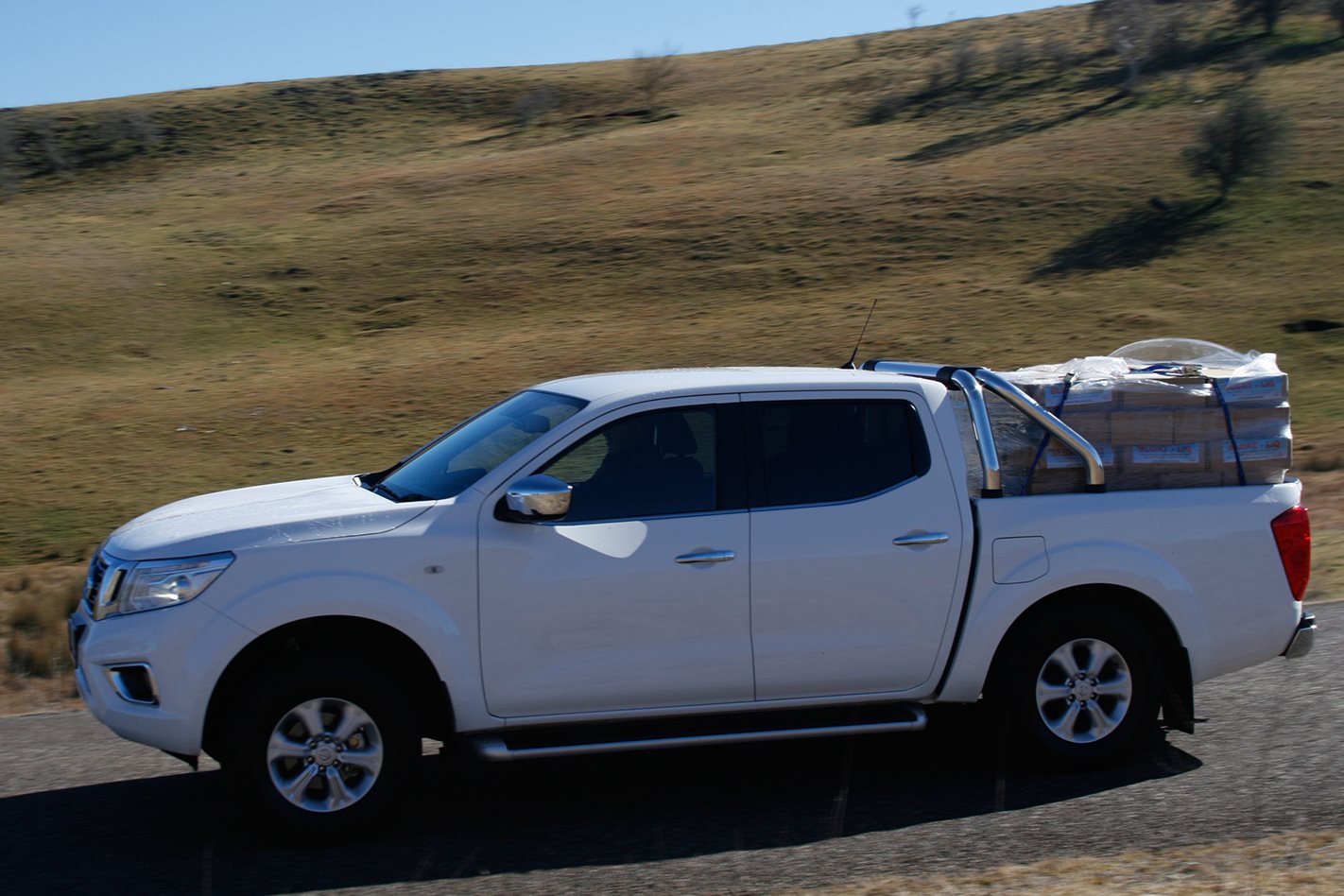 Either way, this 105mm drop is in sharp contrast to the typical 60mm droop of most of the competitor utes (Ranger, Hilux, Colorado, BT-50 and D-Max) in the original multi-ute test. It also indicates that if the rear springs are new, there’s no significant change to the spring rate.

On the road with the 800kg in the tray, the Navara still feels decidedly nose-up, which does nothing for steering feel or confidence. On larger bumps it also feels to bottom out, as it did before.

However, the rear end doesn’t feel to squirm around as much as it did prior to the changes, but this is hard to verify without a side-by-side test. Either way, the Navara still feels well short of the stability and neutral attitude of most competitor utes when carrying 800kg in the tray.

TWELVE months ago we put the seven most popular dual-cab 4x4s – with automatic transmissions – to a maxxed-out tow and load test. Those utes so specified were asked to tow their claimed 3500kg rating, while those with slightly lower tow ratings (Hilux and Triton) were tested with a 2800kg trailer.

Following the tow tests, all the utes were then tested with 800kg in their trays. That weight in the tray, plus driver, observer, towbar, etc. meant a combined payload not far short of 1000kg, so at or near a maximum payload for these utes. For both the tow and the load test, the utes were driven over the same hilly, winding and bumpy road course. 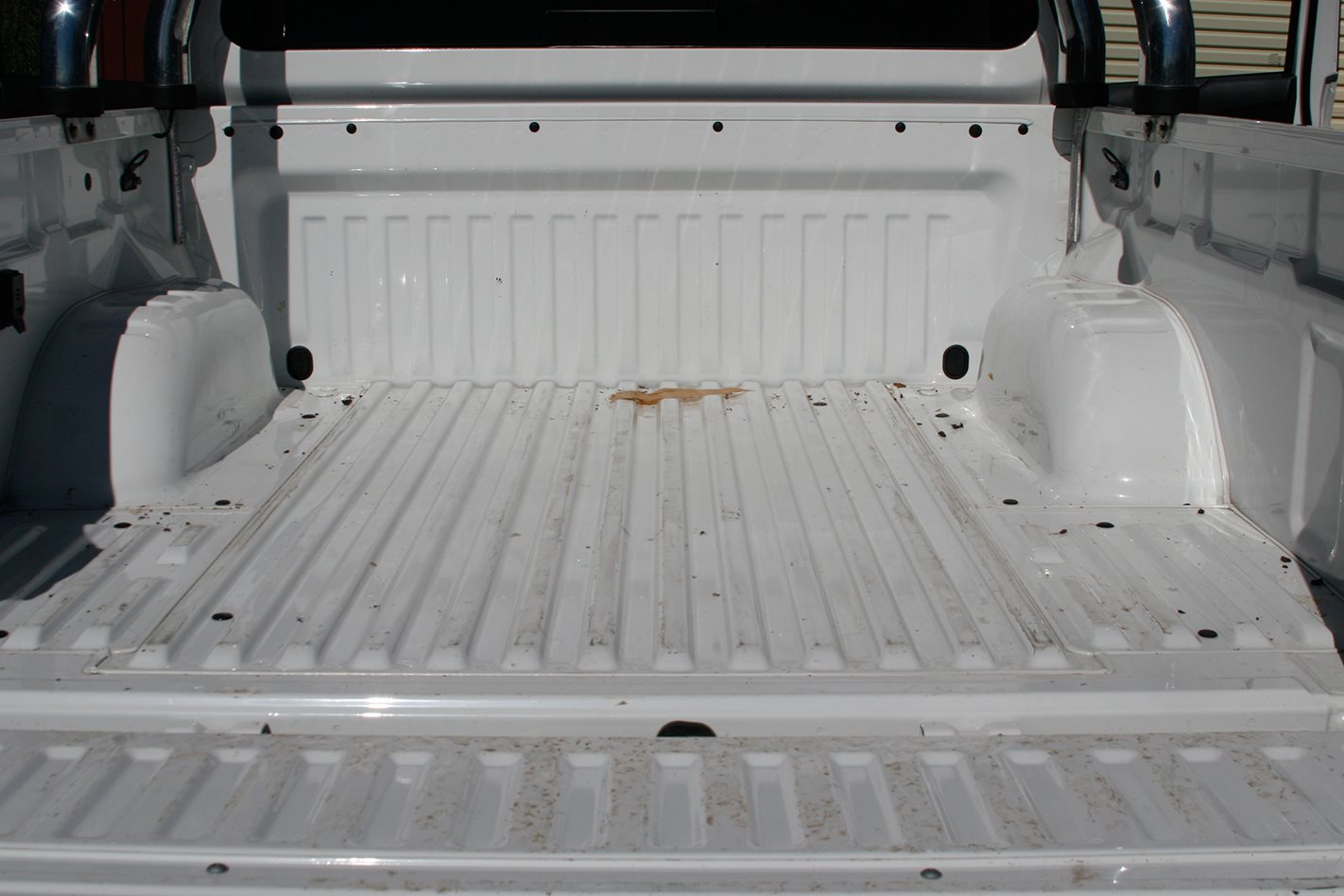 The payload and tow tests were conducted separately, but there was a very strong correlation in the way each ute performed in the separate tests. If a particular ute did well carrying the 800kg in its tub, it also generally did well in the tow test.

Taking into account how the powertrain and the chassis of each ute performed in the tow and load tests, and the theoretical max of what each can carry and tow, we rated the seven utes this way:
1ST – FORD RANGER With the big five-cylinder engine, long wheelbase, extra weight and class-leading GVM and GCM, the Ranger looks the goods on paper and delivered on its promise.
EQUAL 2ND – MAZDA BT-50 It has the same core strengths as its ‘twin’ Ranger, but it lacks the detail improvements that made the MY16+ Ranger a better vehicle.
EQUAL 2ND – HOLDEN COLORADO Plenty of punch from the 2.8-litre diesel, even if it needs more revs than the Ranger or Mazda. A very smart gearbox, and the chassis works well.
4TH – TOYOTA HILUX Primarily held back by the conservative tow rating of the automatic, and it had the lowest payload at test. The chassis is well up to the job, but it needed more grunt from its 2.8-litre diesel to match the best here.
EQUAL 5TH – ISUZU D-MAX Has a worthy chassis, but the engine struggled with either 3500kg or at maximum payload. Since that time, the D-Max’s engine has been upgraded and now offers considerably more torque over a wider spread, so it should tow with more authority.
EQUAL 5TH – MITSUBISHI TRITON Its engine is willing and able, but the chassis is compromised due to its shorter wheelbase and long rear overhang.
7TH – NISSAN NAVARA The engine may have plenty of punch, but the chassis fell well short of towing 3500kg or carrying maximum payload. Since that test the Navara Series II brings revised suspension … hence this retest.

IF YOU want a ute to carry anything near maximum payload, you can do better than the Navara. While we didn’t test the Series II with a 3500kg trailer-load, we don’t expect it to perform notably better than before, given the strong correlation between the way all of the utes performed at either maximum payload or maximum tow capacity.

Away from hauling or towing heavy loads the Navara offers spritely performance thanks to its punchy 2.3-litre bi-turbo, as well as being slightly smaller and lighter than most competitors. 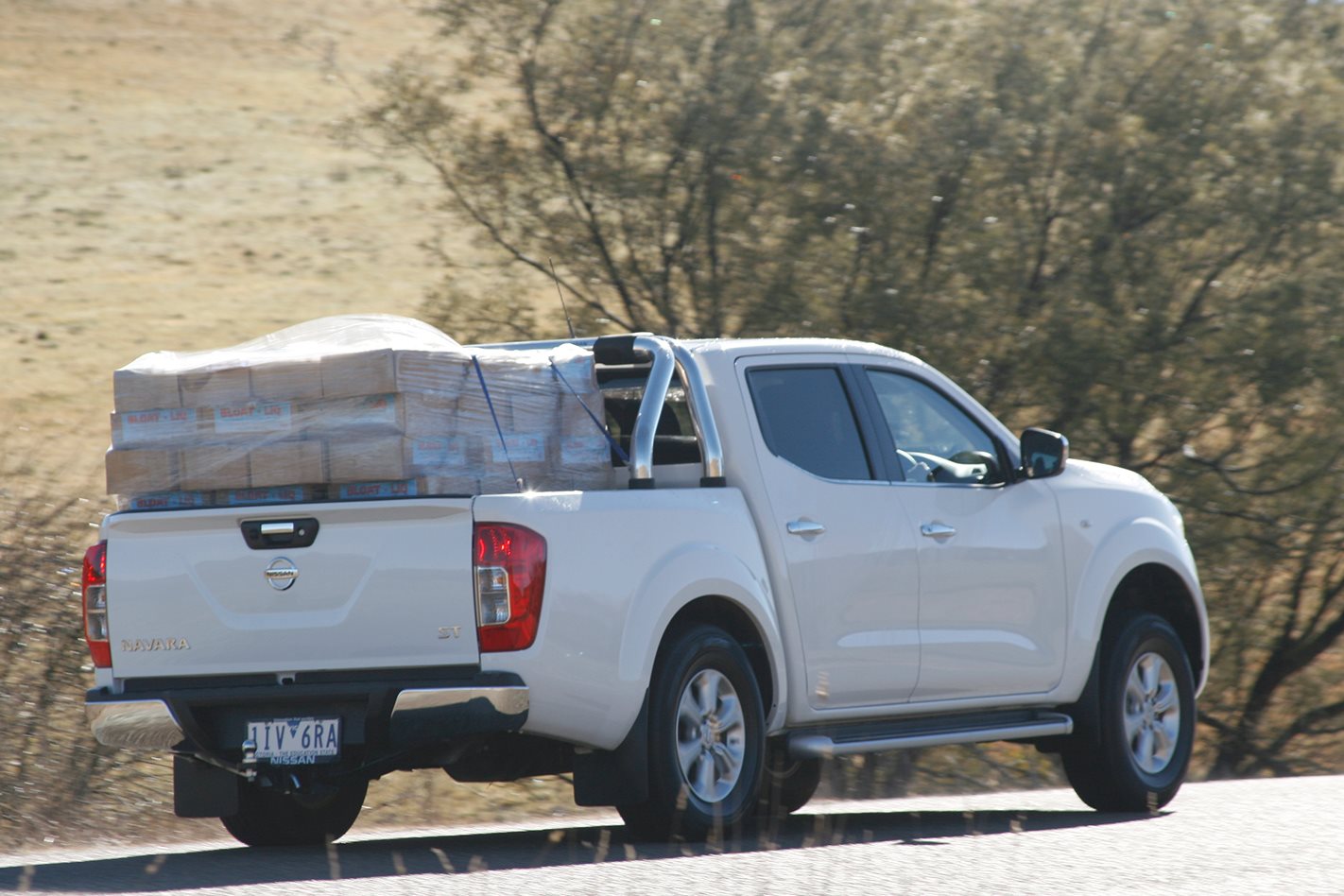 Its seven-speed auto helps, too, given six speeds is the default in this class, as does the short final-drive gearing. The only powertrain negative is that the Renault-sourced engine is on the noisy side when worked hard.

The Navara’s unladen ride and handling is well-sorted and would no doubt cope with moderate loads and tow weights without much fuss. Sharp pricing is also a Navara positive.

MEDIA information issued by Nissan in March this year stated the Series II rear suspension changes centred on new front and rear dampers; although, the initial ‘teaser’ about the Series II issued late in October mentioned the rear coils had been changed as well.

We asked Nissan for clarification, but didn’t receive a reply on that, nor on whether there were any other changes such as upgraded bushes for the five-link system.

THE Navara’s rear suspension employs a live axle, as per the ute norm, but has coil rather than leaf springs, a feature that distinguishes it from its immediate competition. Without leafs to locate the axle (i.e. stop it moving fore-and-aft or side-to-side), the Navara uses four trailing arms for longitudinal location and a Panhard rod for lateral location. 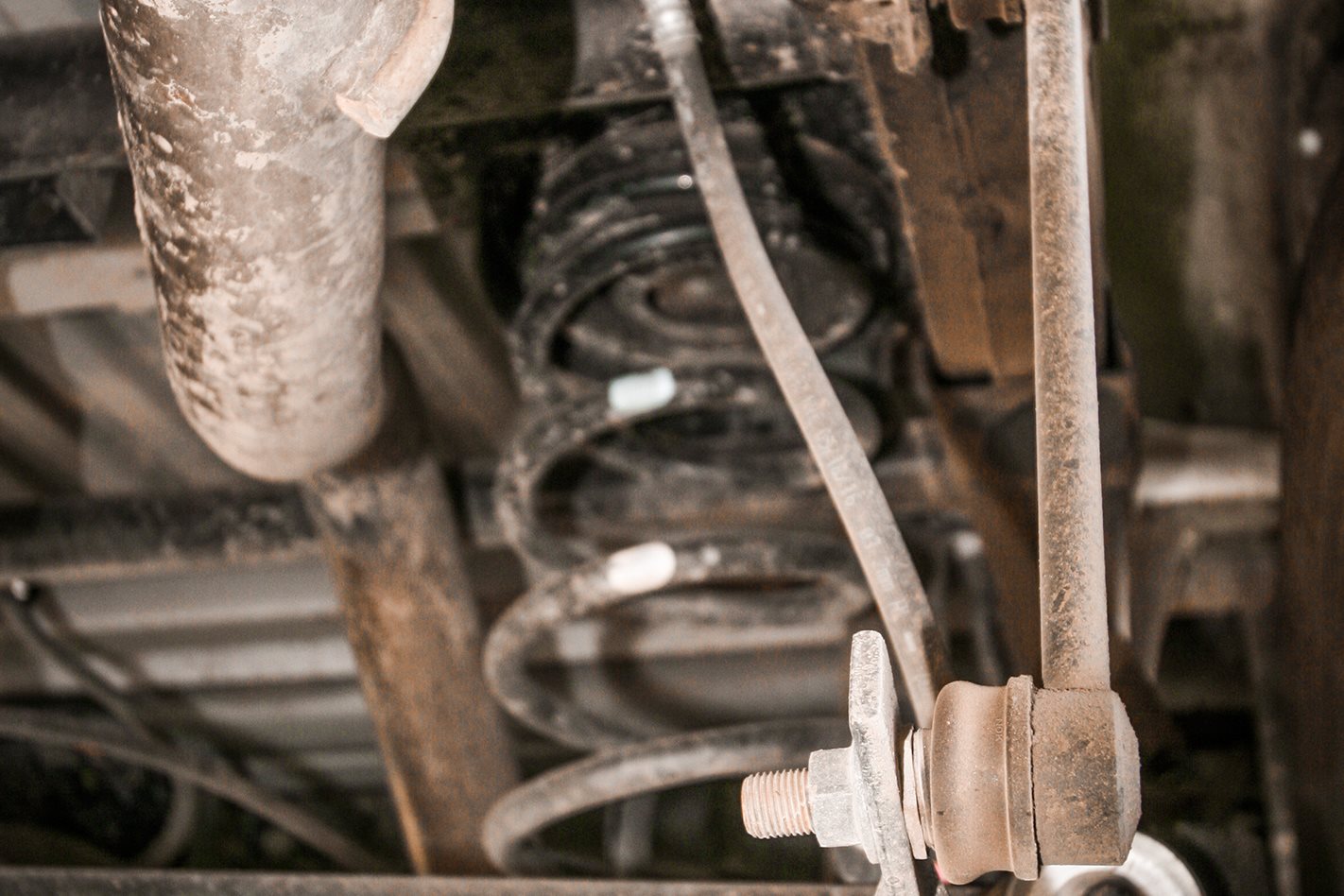 The two trailing arms on either side of the axle sit above one another in a parallel arrangement rather than the top pair being angled in to assist the Panhard rod in laterally locating the axle. The lower longitudinal arms are made from pressed and welded steel, while the upper arms are 25mm-diameter steel rods.

What appears to be single-rate coils are located inboard of the bump rubbers, while a beefy-looking swaybar is mounted behind the axle. 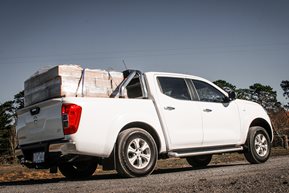