New vs Used: Buy the new Kia Stinger or get a used Lexus IS F Sports Luxury

Need pace and practicality? These two provide different takes on the fast sedan

If you’re after a four-door, rear-drive sedan that caters for fun and family, then these two offer differing flavours for around $50,000. Cue the broken record, but with no Aussies to choose from in the new corner, the default replacement falls to the excitable Kia Stinger. And with a boosted V6 up front and a rear-end that has a penchant for drifts, it isn’t a bad antidote. Although your $50K could also get you some ‘old-school’ Japanese muscle in the form of the Lexus IS F, which is sure to satiate the needs of those who lust after V8 firepower.

Timing is everything. And Kia couldn’t have got it more right when launching its rear-drive performance sedan down under. Yes, there’s no V8 under the bonnet like our now defunct Aussie heroes, but with a twin-turbo 3.3-litre V6 producing 272kW and 510Nm, the Korean replacement is no slouch. By the clock it checks out, too – a launch-control assisted 4.9 seconds to 100km/h is the claim on paper and it’s achievable in reality. 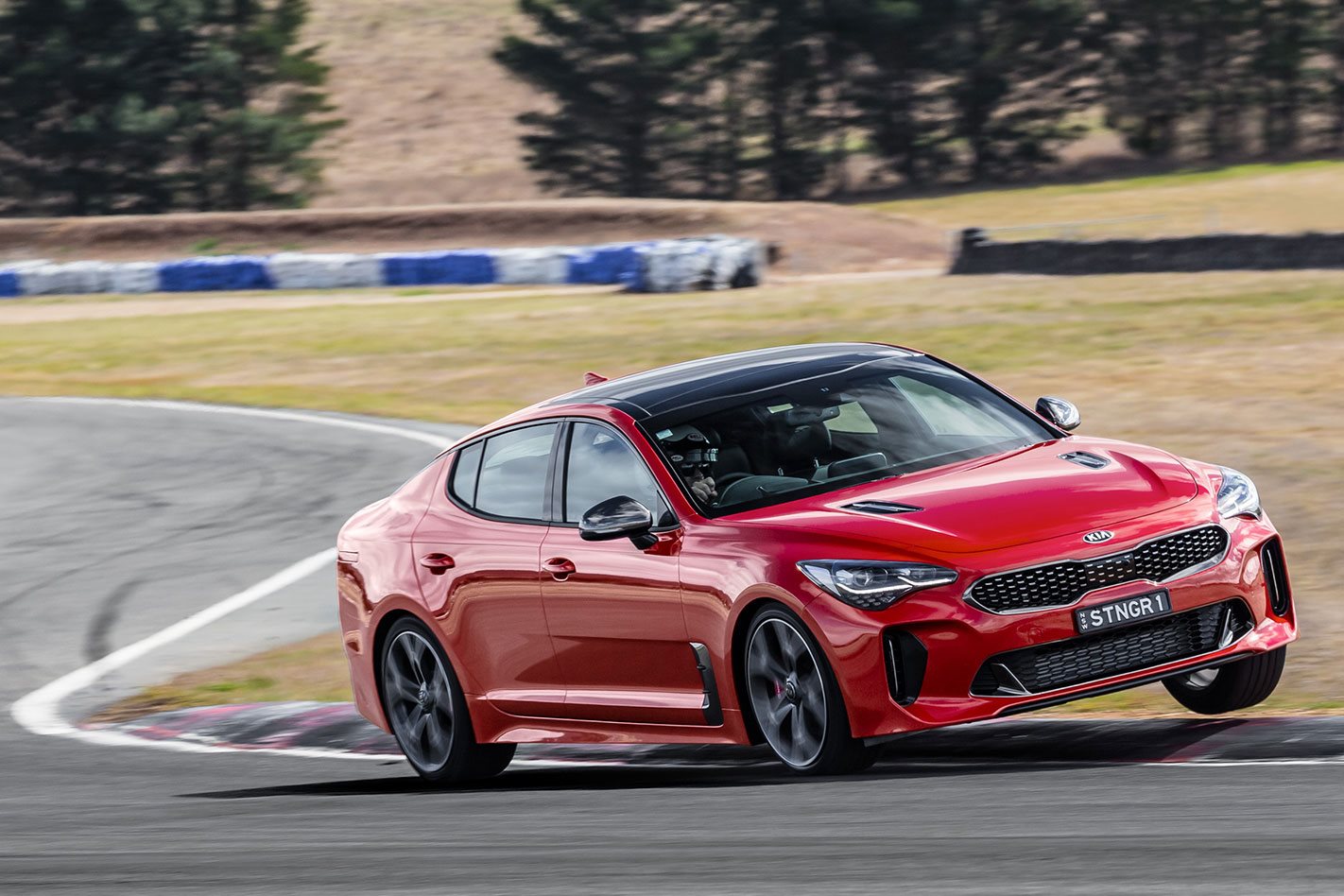 If you’re going for a spirited drive, you'd better be strapped in because the rear axle can be lively. Matched with ample grunt, it doesn’t take much to get significant yaw angles – wanted or not. However, that’s cutting the Stinger short, because it does display enjoyable rear-drive dynamics and, when you tone down the hooligan, it can be devastatingly quick. The steering is a bit of a letdown and the eight-speed auto offers no true manual mode. However, the Stinger is a satisfying car to drive, and it’s one that can cover mundane highways and flowing backroads in the same trip. 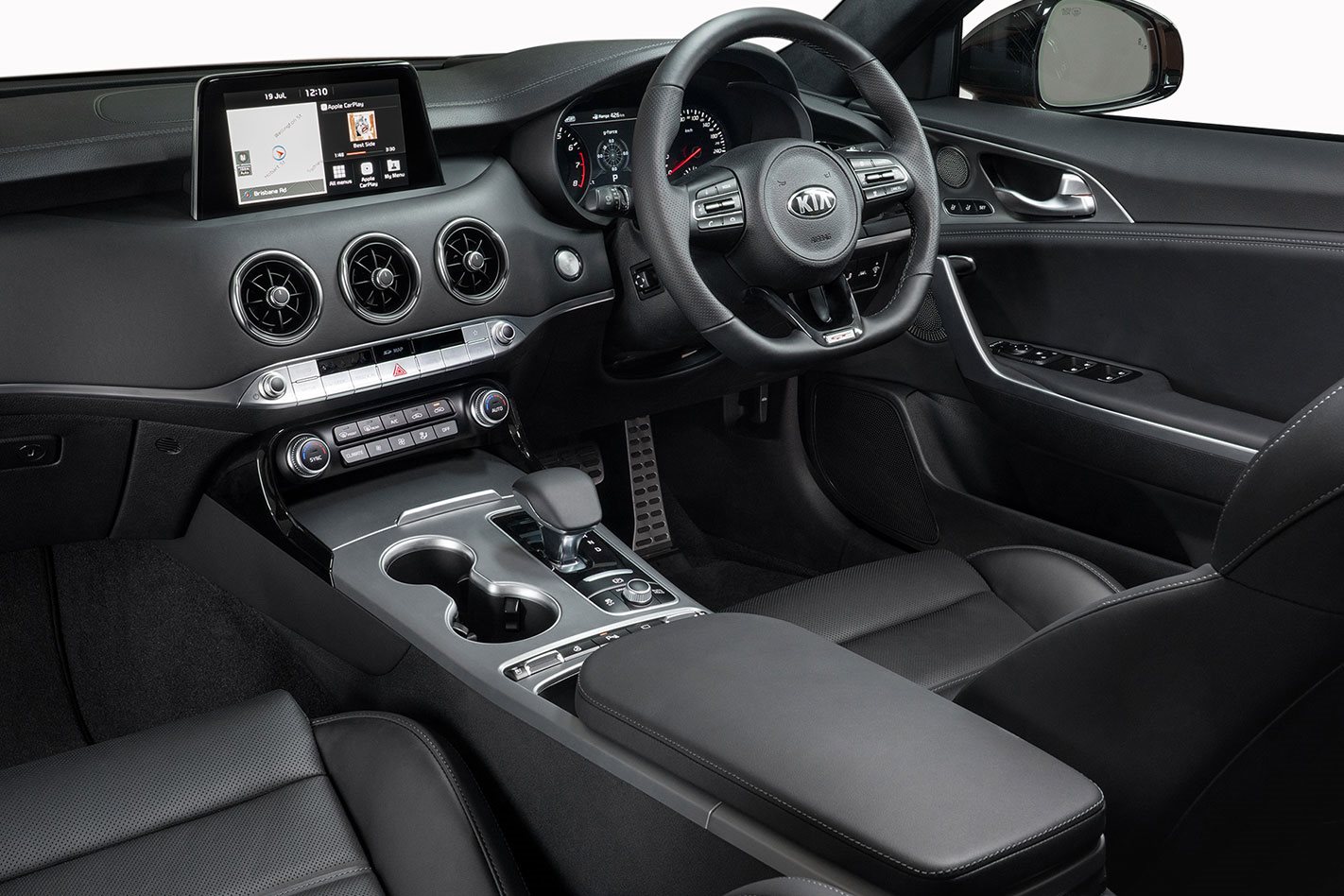 Inside the Stinger is a big step forward for the marque. It looks and feels premium, with turbine-style air vents and soft-touch plastics. It does the big, comfy cruiser vibe well. And it doesn’t skimp on standard features. It’s also quiet with commendable NVH levels. At 405 litres the boot is decent rather than capacious for the size of the car, but the liftback design makes access easy. Head and legroom in the back is enough for most body types.

Sadly, the IS F, then and now, is overshadowed by its rivals. The German trio, Audi RS4, BMW M3 and Mercedes-Benz C63 AMG, have a way of overpowering the Japanese contender. Introduced in 2007, the IS F received a mid-life update before being discontinued. The refreshed version is the one you want as it gained a Torsen limited-slip diff among other styling and spec tweaks. The double-stacked tailpipes remained as a defined styling feature. 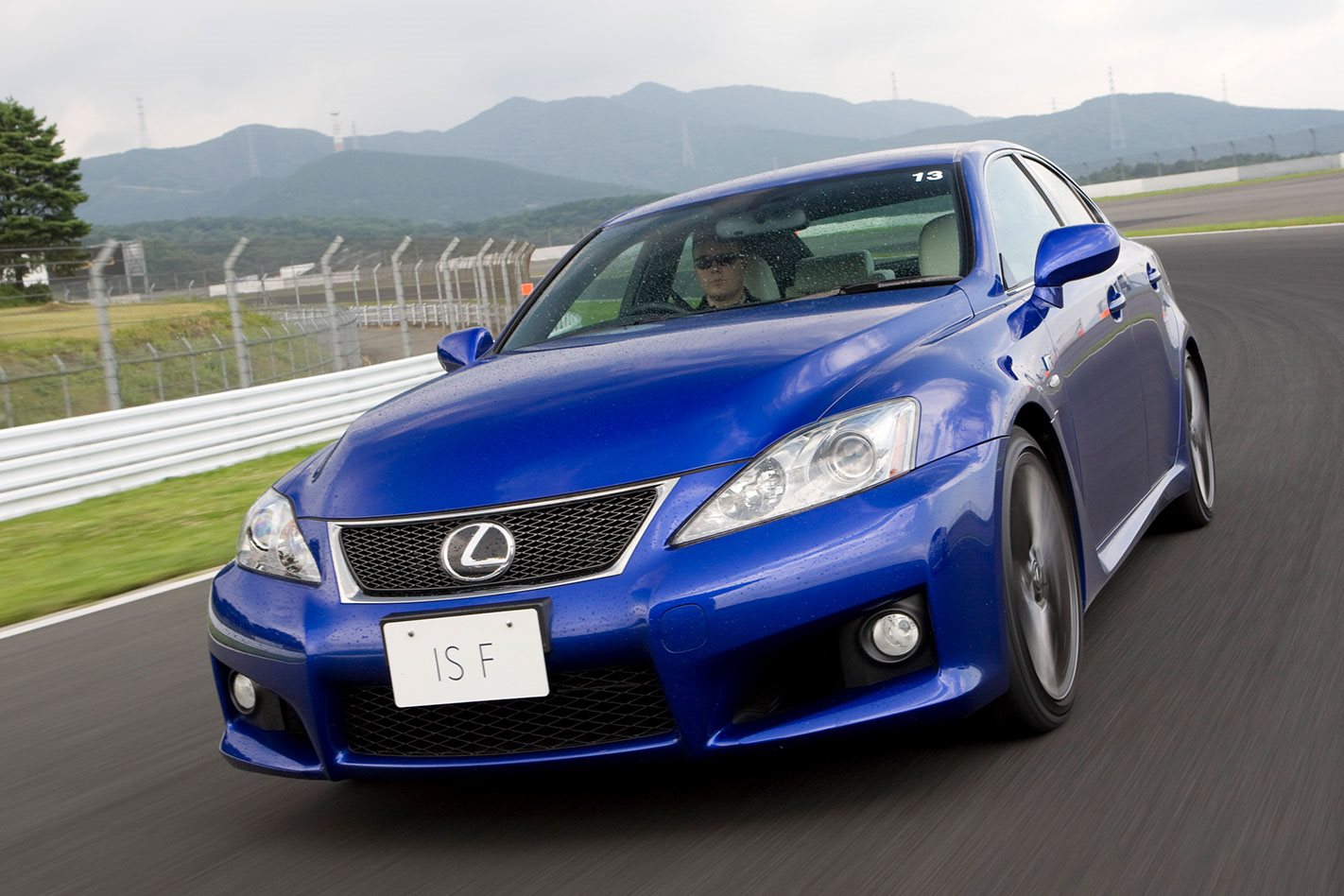 Developed with Yamaha, the naturally aspirated V8 does its best work up high in the rev range. So you need to keep the eight-speed auto shifting through the gears to keep the 5.0-litre on the boil. It certainly doesn’t have the meaty torque of the Stinger down low despite being endowed with only 5Nm less. The addition of the LSD increased the IS F’s dynamics, tying in with a chassis that offers decent grip and poise. However, it doesn’t quite reach the heights of its German rivals in this regard. Still, the feel-good factor is high in the Lexus.

Inside, the IS F missed out on the updated interior of the current IS, so it’s starting to look dated. There’s buttons aplenty, but a large central screen deals with the infotainment, while the instrument cluster utilises traditional gauges. It does miss out on key tech features the Stinger gains as standard, a fact that highlights its age. There’s little to distinguish it from lesser IS variants, but the steering wheel comes with metal-finish shift paddles and there’s also an F motif on the lower rim. The IS F isn’t as big as the Stinger, so cabin space isn’t as capacious and the boot space is reduced to 378 litres. 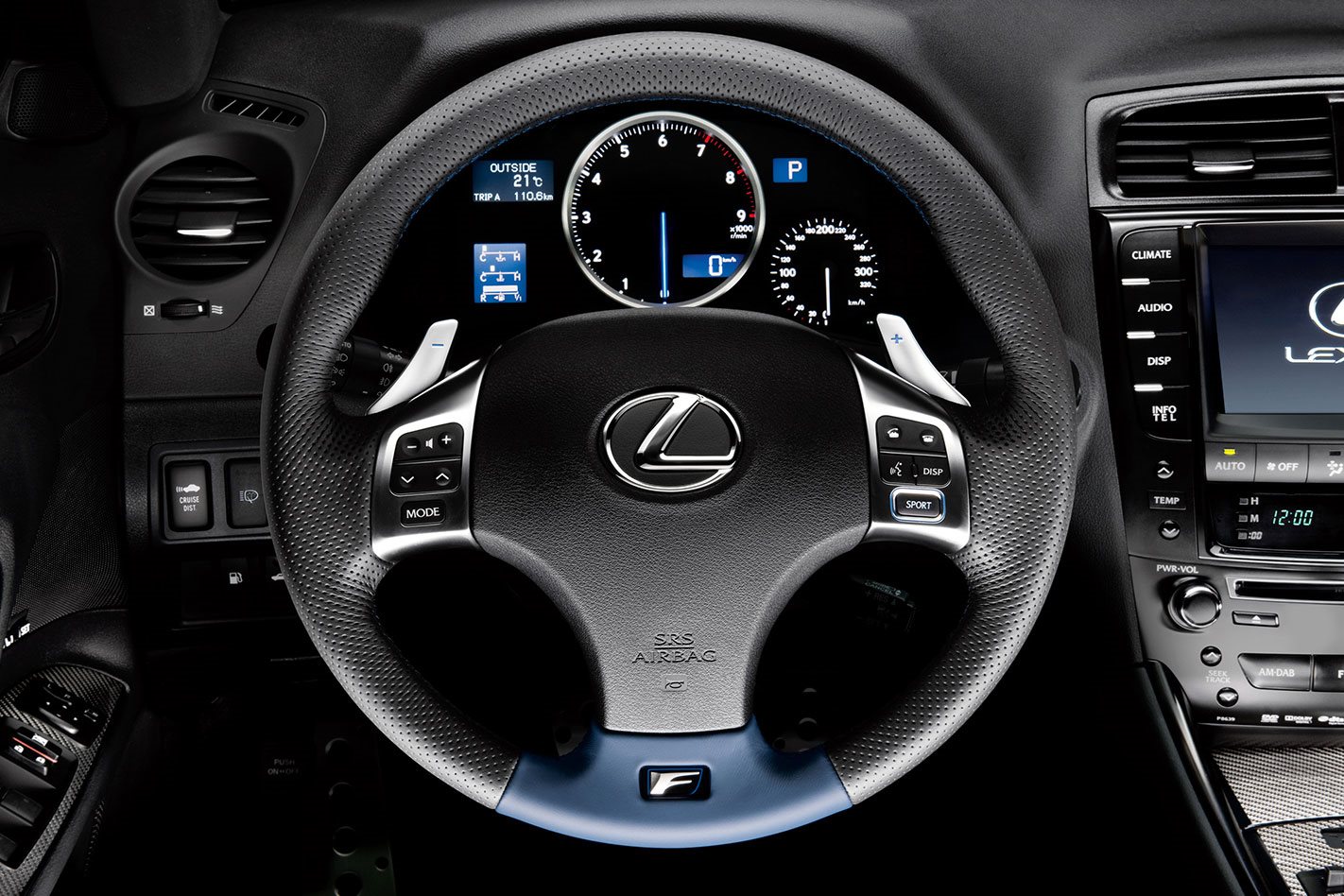 I like the Stinger. Actually, I really like the Stinger a lot. It’s fun, scary, comfortable and practical all in one car. But for me, and somewhat surprisingly given the aforementioned list of attributes, it’s missing that last element of character. The IS F isn’t. And it’s pretty much a forgotten gem. The IS was the first to be adorned with the sporty F badge, and it’s yet another example of how Lexus doesn’t merely offer tarted-up Toyotas. While the V8 is the main event, with its sonorous soundtrack, it’s not the only reason to like IS F. It looks the goods and isn’t a numpty when you find some corners. The downside is that there’s no warranty (not that you should need it with a Lexus), the infotainment is very much outdated and you really need to be ‘on it’ to get the 5.0-litre V8 to boogie. Still, get one before everyone else remembers how good they are.

Andy Enright
Deputy Editor
I must admit to a complete about-face here. Right up until I was about to write this, I was certain that I’d choose the Lexus for its fabulous atmo engine, slick build quality and Japanese near-exotic nerdiness. I think the novelty could wear off though, and then you’d be left with a car with an antediluvian infotainment system, no smartphone mirroring, no warranty, seven-year-old leather, and a hole in the low-end torque curve that’s big enough to have its own event horizon. You need to rev an IS F to 5200rpm for peak torque and 6600rpm for peak power, and while it sounds great doing so, a Stinger would just surge away from it. The lovely thing about the Kia is that it’s so incredibly easy to live with. It’s a muscular cruiser that you just fat-arm about in. The Lexus and the Kia are two very different means to an end, yet the Stinger demonstrates exactly why the 11 years that intervened between the launch of the two cars is almost an eternity in terms of automotive technology.

Regular readers of New vs Used would have figured out that I usually opt for the car that sounds the best. But it’s time to buck the trend, with the Kia Stinger winning for me. While the IS F and its V8 burble would make a fantastic soundtrack for daily commuting, the speed and competence of the Stinger sees me swinging in its favour. The Stinger is incredibly comfortable for daily duties, as well as for long hauls. While the sound is a tad insipid, it makes up for it with seriously impressive straight-line performance. A good set of rubber (like the Michelin Pilot Sport 4 items fitted to the GT) would be high on the priority list to replace the gumball Continentals.