When it comes to cars, we’re told the future is autonomous. We won’t need to drive. Cars will drive themselves and park themselves. Cars will pick the kids up from school, and whisk us interstate while we stream Netflix or read a book catch up on sleep.

For example, US electric car maker Tesla claims its cars are technically capable of driving themselves from your garage to work via school and the supermarket without you having to lift a finger. In America Tesla has already racked up millions of miles of autonomous driving on public roads… and there are videos of people eating cheese and having lightsabre fights while driving to prove it.

Some Audis can not only drop you at the shops, but also drive themselves into the multi-level carpark and park themselves, waiting to be recalled when you’re ready to go home.

There are Mercedes-Benz models that can get you from Melbourne to Sydney like you’re a passenger on a luxurious train - except Australian legislation doesn’t allow this level of autonomy yet.

And it’s not just expensive cars. Many affordable hatchbacks, like the Kia Rio and Mercedes-Benz A200 have cruise control systems that can match your speed to surrounding traffic, and most passenger cars these days have autonomous emergency brakes (AEB), which leap into action when you’re not paying attention.

That’s all well and good, but where are we really on the road to autonomy? And with all these ‘self-driving’ systems around, what counts as a truly autonomous car? 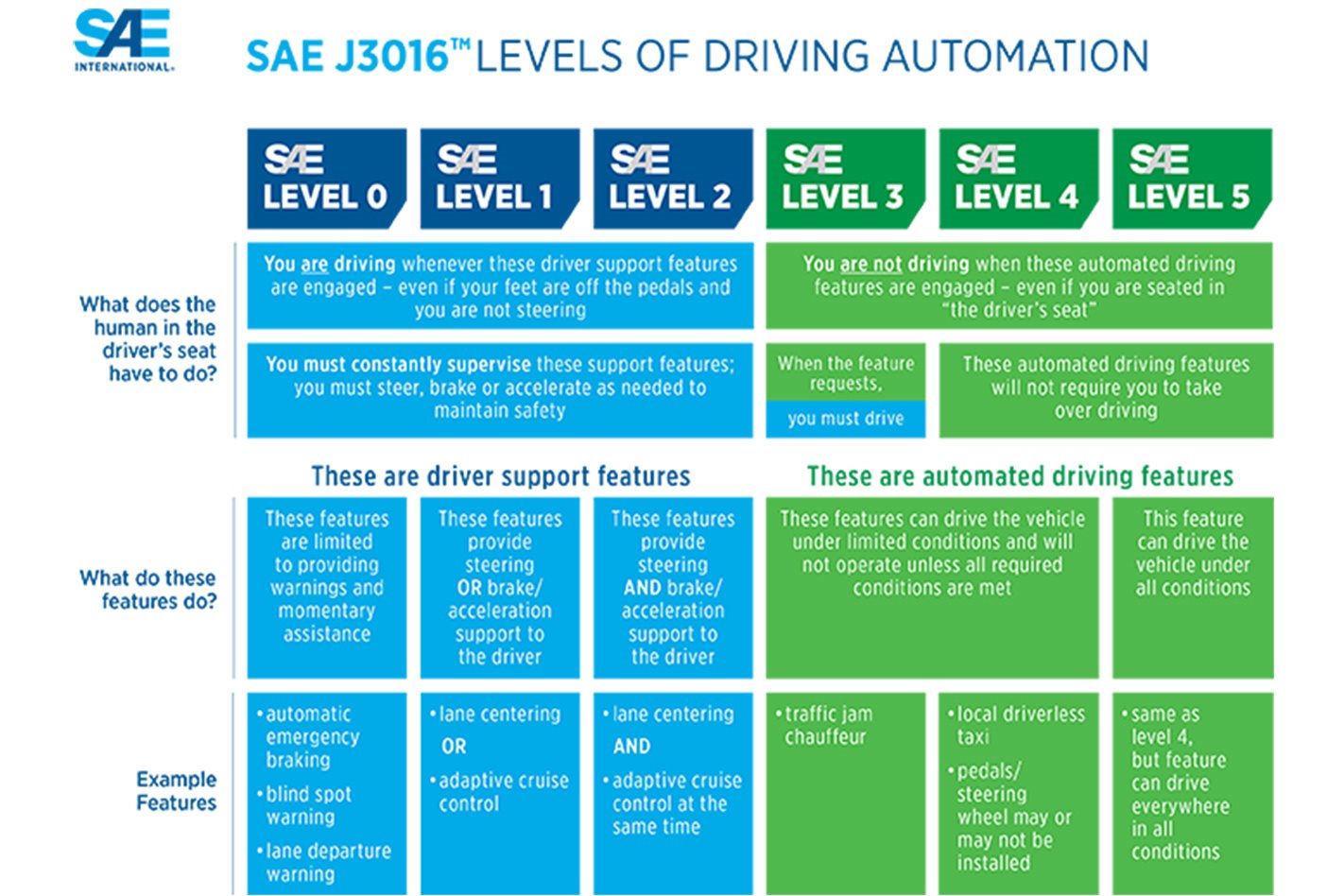 When it comes to understanding the apples and oranges of our autonomous future, the Society of Automotive Engineers has leaped to our rescue with a comprehensive rundown of the various features which car companies tout as autonomy, and just how ‘autonomous’ they really are. You may have already heard of "Level Three Autonomy" and "Level Five Autonomy", or even "Level 2.5" - well, the above chart tells you precisely what defines each level.

And, in case you were curious, it's the stuff on the green side that is what is regarded as self-driving - everything in blue is merely a driver-assistance system.

This handy matrix gives non-engineers like you and me a really good overview of the different levels of autonomy, from Level 0 (no autonomous systems at all) to Level Five (can drive itself everywhere in all conditions without human intervention). How far are we from Level Five? If you ask the automotive industry, most are pessimistic we'll even get to Level Four. Even Toyota, which has invested and continues to invest significant sums in autonomous research, says "nobody is even close" to a workable Level Five capability, and likely won't be for quite some time.

For a more thorough rundown, you could download SAE report (J3016), but be warned, it’s very technical – as you’d expect from the Society of Automotive Engineers!

How do you rate your knowledge of autonomous systems, and what do you think about a future with driverless cars? Let us know below!