Plug-in Hybrid Vehicles (PHEVs) can offer the advantages of a battery-electric vehicle without having to sacrifice the peace of mind that comes with having an internal combustion engine (ICE) under your bonnet.

For the average Aussie commute, most PHEVs can run purely on electricity for emissions-free motoring, but will function as a conventional hybrid once the battery runs out.

A downside of PHEVs compared with regular hybrids is that their pure-electric range requires a bigger battery, which often makes them heavier and less fuel-efficient than comparable hybrids and even some ICE vehicles when using the engine. This might appear to contradict PHEV's very low fuel consumption figures, though it's worth noting their litres/100km figure assumes you've ventured off with fully charged battery.

Optimising the fuel efficiency of a PHEV often comes down your charging regime. If you head off with a flat battery, you'll be dragging around dead weight, but if plugging in every night becomes part of your routine, you'll be making the most of the technology under your bonnet and boot.

If you've done your research and feel a PHEV is a right fit for your transport requirements, here is a list of all the models available in Australia.

Similar inside to the i30 hatch, the plug-in hybrid version of the IONIQ is a good option for anyone who doesn't want to go headfirst into the full Ioniq EV experience (The Hyundai Ioniq is the only model on sale in Australia that is offered as a mild hybrid, plug-in hybrid and battery electric vehicle).

It has a 63km pure electric range, which is more than enough for the average city commute, making it a relatively affordable option for anyone considering emissions-free daily driving. That said, we reckon it's worth paying about $6500 more for the full EV Ioniq that offers a 320km range, if you can live without the combustion power safety net.

The best-selling plug-in electric vehicle in Australia, Mitsubishi's Outlander has a 55km EV range which is more than enough for an emissions-free school run.

In December 2019 it gained a more powerful 2.4-litre petrol engine and 70kW electric motor and the battery capacity increased from 12kWh to 13.8kWh, which brought improved performance and range compared with the previous model.

Arriving in the latter part of 2020, Ford's first hybrid model in Australia combines a 2.5-litre four-cylinder petrol engine, electric motor and generator and a 14.4kWh lithium-ion battery to produce 167kW of power to be one of the most fuel-efficient and cleanest PHEVs on the market.

The first plug-in Mini to go on sale in this country now has a full-charge range of up to 60km from its 9.6kWh lithium-ion battery pack – more than enough for the average Australian to drive to work and back without having to run the car’s 1.5-litre turbo petrol three-cylinder engine.

It's worth noting it originally had a 40km EV range but Mini claims this increased with the more powerful battery pack for the MY21 model revealed in October 2020.

The Mercedes-Benz A Class is now available with an ultra-efficient plug-in hybrid (PHEV) powertrain that’s capable of travelling up to 73 kilometres on batteries alone.

Available in hatchback and sedan versions, it comprises a front-wheel-drive hybrid powertrain with a 118kW/250Nm 1.3-litre four-cylinder petrol engine, coupled with 75kW/300Nm electric motor and 15.6kWh battery that generates more off-the-line oomph than the regular A250.

This plug-in hybrid version of Volvo's Wheels Car of the Year winning small SUV will save you around 30 percent in fuel costs during regular driving and can slash your fuel bill altogether if you keep it plugged in and ready for short journeys.

Where other XC40s use 2.0-litre four-cylinder petrol power, this one is propelled by a 1.5-litre three-cylinder petrol engine paired with a small battery pack and electric motor. 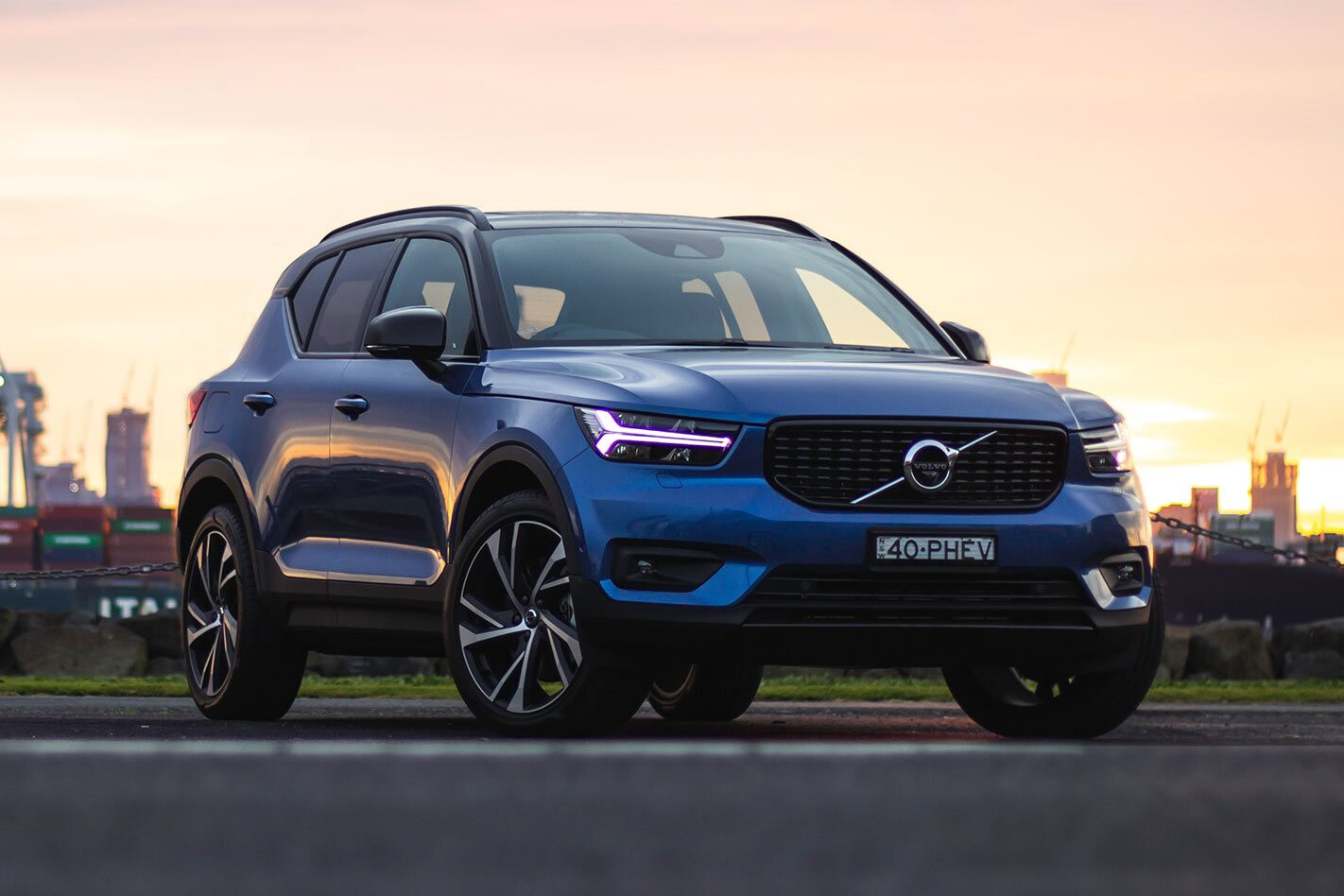 The C300e sedan utilises Benz's third generation of hybrid technology and has a strong 90kW electric motor that propels it for up to 55km on battery power alone. The motor also combines with the 2.0-litre, four-cylinder petrol engine to produce up to 235kW/700Nm through the back wheels via the nine-speed automatic transmission. That means it's quick off the mark and can sprint from 0 to 100km/h in just 5.4 seconds.

The electrified version of BMW's popular sports sedan features a 2.0-litre turbocharged petrol engine paired with an electric motor for 185kW under normal operation, but an overboost function adds 30kW to that total for a zero to 100km/h dash in 6.0 seconds.

The GLC 300e’s medium SUV's place in Merc’s plug-in-hybrid rollout is more than justified given its pricing, which is about $5000 more than the petrol GLC 300.

It features a 13.5kWh lithium-ion battery pack which supplies energy to an electric motor for up to 46km of emission-free driving in premium comfort. One of the reasons the XC60 won Wheels Car of the Year in 2018, the range-topping XC60 T8 drives beautifully for a medium SUV. It has a relatively low 44km range and is quite thirsty in hybrid mode but the electric motor brings 65kW worth performance benefits resulting in smile-inducing acceleration.

The Volvo XC90 is stylish, spacious and has seven seats. And, with the T8-spec petrol-electric hybrid engine and plug-in charging capability, it’ll be the most fuel-efficient seven-seater on any leafy suburban street and even slightly more efficient than the smaller XC60 T8.

MOREElectrified SUVs for the environmentally conscious

Available as a sedan only, the 2021 E300e is an electrified alternative to the very well-equipped E300 and features the same plug-in hybrid powertrain as the C300e with a total system output of 235 kW/700Nm.

Due to arrive in November 2020, this is the first plug-in hybrid Range Rover Sport variant. It pairs the company’s 2.0-litre four-cylinder Ingenium petrol engine with a 105kW electric motor fed by a 13.1kWh lithium-ion battery, for a combined output of 297kW and 640Nm.

The roomy and luxurious X5 plug-in hybrid combines two electric motors and a turbocharged 3.0-litre six-cylinder petrol engine. When combining all power sources it can accelerate from 0-100km/h in a sportscar-like 5.6 seconds.

The most affordable plug-in hybrid Cayenne variant uses the entry-level Cayenne as its basis including its 3.0-litre turbocharged V6 petrol engine, eight-speed automatic transmission and four-wheel drive system, but adds a 100kW electric motor slotted between the engine and gearbox, a 14.1kWh lithium-ion battery in the boot and a charging socket.

The uber-luxurious BMW 745e has a specially-developed petrol inline six-cylinder combined with battery power to sip fuel at a rate of 2.1L/100km when starting a 100km journey on fully charged batteries.

Available as a sedan or 'Sport Turismo' wagon, the most affordable PHEV version of the second-generation Porsche Panamera (the 4 stands for four-wheel-drive) features an all-Porsche powertrain including a 243kW 2.9-litre twin-turbo V6 engine and 100kW electric motor.

When fully charged it has an all-electric range of 51km. You can travel at speeds up to 140km/h on the lithium-ion battery alone, though this will take a chunk out its maximum range.

This Porsche Cayenne mates a 404kW/770Nm 4.0-litre twin-turbo V8 to a 100kW/400Nm electric motor stashed inside the transmission housing for a combined 500kW/900Nm all-wheel drive performance that can sling its 2535kg mass from 0-100km/h in just 3.8sec. This makes it the most powerful performance SUV on the market, eclipsing even the 478kW Lamborghini Urus.

A plug-in hybrid with a turbocharged V8 engine seems a bit of an oxymoron, but that doesn't matter when you're driving on battery power alone for up to 50km. But run the V8 and electric motor in unison and the Panamera’s acceleration is blistering, with all-wheel-drive traction and a combined 850Nm of torque allowing the big limo to hit 100km/h from a standing start in just 3.4 seconds.

EV range, fuel consumption and CO2 emissions are as stated to GreenVehicleGuide.gov.au unless claimed.