A car’s vehicle identification number, or VIN, is a unique identifying code that all cars are required to have. For all the millions of cars that have been built around the world, no two cars have the same VIN.

All cars built after a 1981 have a VIN made up of 17 characters (digits and capital letters) that reveal information such as the model and variant of the car, its manufacturer, engine size and where it was made.  VINs on older cars can vary from 11 to 17 characters, with the shorter ones providing less detailed information.

MORE What does the tyre pressure warning light actually mean?

What is the VIN used for?

You will need to provide your car’s VIN when dealing with things such as car insurance, registration, warranties, vehicle recalls, parts and servicing. It’s also handy when looking to buy a car to find out its history, including if it’s ever been stolen, written off, or subject to bad debt. It can even reveal if your car has been resprayed a different colour.

How to find your VIN

The location of the VIN can vary between cars.

Most new cars display it at the corner of dashboard on the front passenger side of the vehicle (driver’s side in left-hand-drive countries) so it can be easily viewed though the windscreen – you may have to lift the windscreen wiper arm to see it.

Other cars have the VIN stamped or etched on a plate on the side of the front passenger side door, or in the door frame.

Alternatively you may find it on a plate located in the engine bay, either on the firewall or the strut above the radiator.

Another place is in the boot, below the spare tyre.

Your VIN is also recorded on your vehicle registration and insurance documents.

MORE Three car troubles you can fix yourself 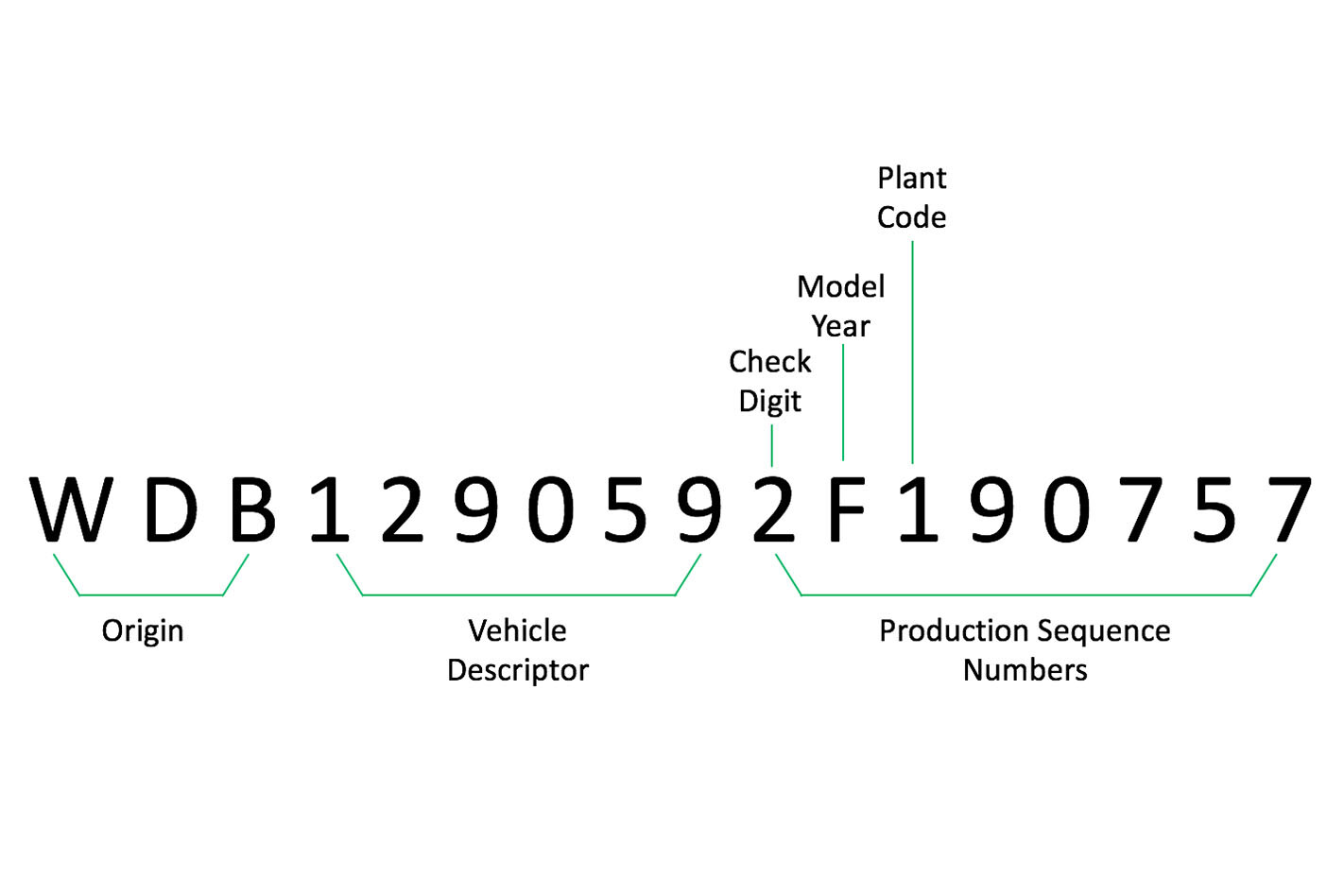 The picture above shows what a VIN looks like. The first three characters of the VIN generally reveal the origin of your car

W - Country where it was made
D - Manufacturer
B – Vehicle model

Characters 4-8 [129059] refer to the type of car such as body style, variant, engine type, transmission, colour etc. The numbers themselves don't make sense on their own, but they correspond to an alphanumeric coded system used by the manufacturer.

The ninth character [2] is called a check digit that is a security code that identifies the VIN as being genuine.

The next character [F] reveals the actual plant where the car was manufactured. The rest of the sequence is the car’s production or serial number.

One thing you won’t see on a VIN on newer cars is the letters I, O and Q as they can be easily confused with each other or the number 0.

Remember, while you may have to quote or enter your VIN from time to time, you won’t actually need to know what the characters mean.