UPDATED - After the Federal Bureau of Investigation determined that the rope found hanging in Bubba Wallace's garage was a garage door pull and not a noose as first suggested, NASCAR officials released a picture of the rope in question. 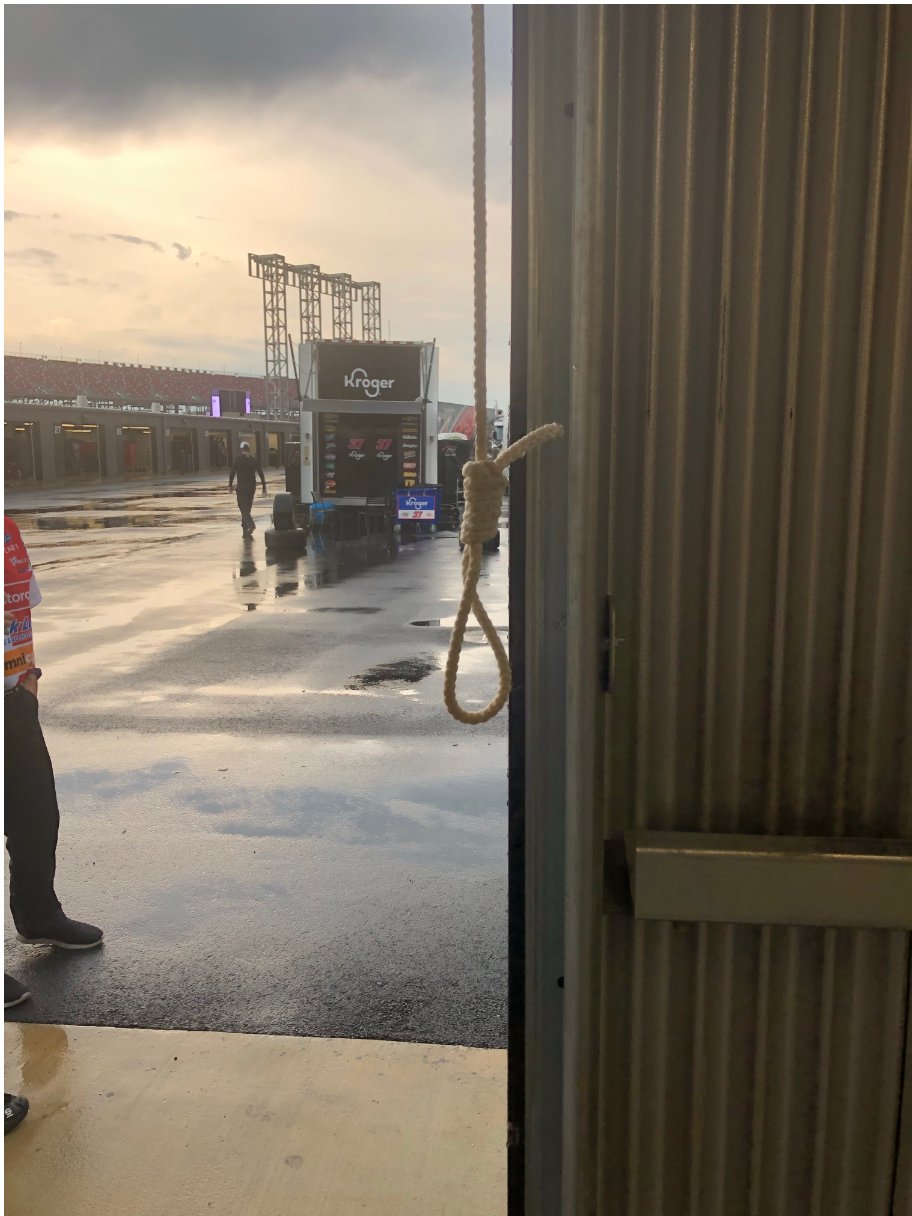 “Upon learning of and seeing the noose, our initial reaction was to protect our driver,” said NASCAR President Steve Phelps. “We’re living in a highly charged and emotional time. What we saw was a symbol of hate and was only present in one area of the garage and that was of the 43 car of Bubba Wallace. In hindsight, I should have used the word ‘alleged’ in our statement.

“As you can see from the photo, the noose was real, as was our concern for Bubba. With similar emotion, others across our industry and our media stood up to defend the NASCAR family. Our NASCAR family. Because they are part of the NASCAR family, too. We are proud to see so many stand up for what’s right.”

After Sunday’s discovery, NASCAR officials asked each track to sweep through respective garages. Across the 1,684 garage stalls at 29 tracks, NASCAR found only 11 total had a pull-down rope tied in a knot and only one noose — the one discovered last Sunday in Wallace's garage stall.

UPDATED - the entire NASCAR paddock rallied around a clearly emotional Bubba Wallace prior to the start of the Geico 500, offering their support in the wake of the discovery of a noose in the Alabama local's pit garage.

“Over the last several weekends, I have been overwhelmed by the support from people across the NASCAR industry including other dreams and team members in the garages,” Wallace said in a statement.

“Together, our sport has made a commitment to driving real change and championing a community that is accepting and welcoming of everyone. Nothing is more important and we will not be deterred by the reprehensible actions of those who seek to spread hate."

NASCAR racer Darrell ‘Bubba’ Wallace has called the discovery of a noose in his pit bay in Talladega, Alabama, a “despicable act of racism and hatred”.

The sport’s only black competitor, Wallace has spoken out in favour of the recent US protests against police brutality and racial oppression, known as the Black Lives Matter movement.

Wallace, who raced recently in a #blacklivesmatter livery, was also instrumental in the decision by NASCAR’s organising body to ban the Confederate flag from all of its events.

“Today’s despicable act of racism and hatred leaves me incredibly saddened and serves as a painful reminder of how much further we have to go as a society and how persistent we must be in the fight against racism,” he said on Twitter.

NASCAR released its own statement, decrying the act.

“Late this afternoon, NASCAR was made aware that a noose was found in the garage stall of the 43 team,” read the statement. “We are angry and outraged, and cannot state strongly enough how seriously we take this heinous act. We have launched an immediate investigation, and will do everything we can to identify the person(s) responsible and eliminate them from the sport.

“As we have stated unequivocally, there is no place for racism in NASCAR, and this act only strengthens our resolve to make the sport open and welcoming to all.”

Wallace next to his #blacklivesmatter car

The NASCAR series is in the midst of a condensed 2020 championship that has been conducted in front of empty stands, but the Talladega race – which was delayed by rain - was the first event since COVID-19 restrictions were put in place to allow a small crowd to attend.

It’s also the first race since the ban on the Confederate flag was announced early in June. A 5km long convoy of protesters outside waved the divisive flag – which was used by southern Confederate armed forces in the American civil war – while a light plane displayed a flag and a sign that read ‘Defund NASCAR’; a reference to a movement towards defunding US police forces.

Talladega's main NASCAR race was delayed due to rain

Wallace said earlier in the month that he wanted people to feel comfortable coming to a NASCAR race, and that the flag may have scared people away.

“To you, it might seem like heritage, but others see hate,” he told reporters. “We need to come together and meet in the middle and say, ‘you know what, if this bothers you, I don’t mind taking it down.’”

“This is not a new battle for me,” he said in a self-written article in the UK’s Sunday Times newspaper. “I’ve been fighting the stigma of racism throughout my racing career — from kids throwing things at me while karting, to being taunted by fans in black face at a 2007 grand prix, one of my first Formula One races.”

Hamilton (above) has founded a commission in his name, working with the Royal Academy of Engineering to create a research partnership to use motorsport as a vehicle to engage more young people from black backgrounds with Science, Technology, Engineering and Mathematics (STEM) subjects.

“When I look back in 20 years, I want to see the sport that gave a shy, working-class black kid from Stevenage so much opportunity, become as diverse as the complex and multicultural world we live in,” he wrote.