Honda’s mainstay SUV may look familiar, but it’s undergone a few key changes to make it a better family hauler

Honda’s mainstay SUV may look familiar, but it’s undergone a few key changes to make it a better family hauler

The most significant is the adoption of a downsized turbocharged petrol powertrain across the entire range, with no diesel or naturally-aspirated engines in sight. The other major change is the availability of a three-row, seven-seat configuration for the first time in Australia, making it the company’s first seven-seater to land on our shores since the larger MDX departed in 2006. 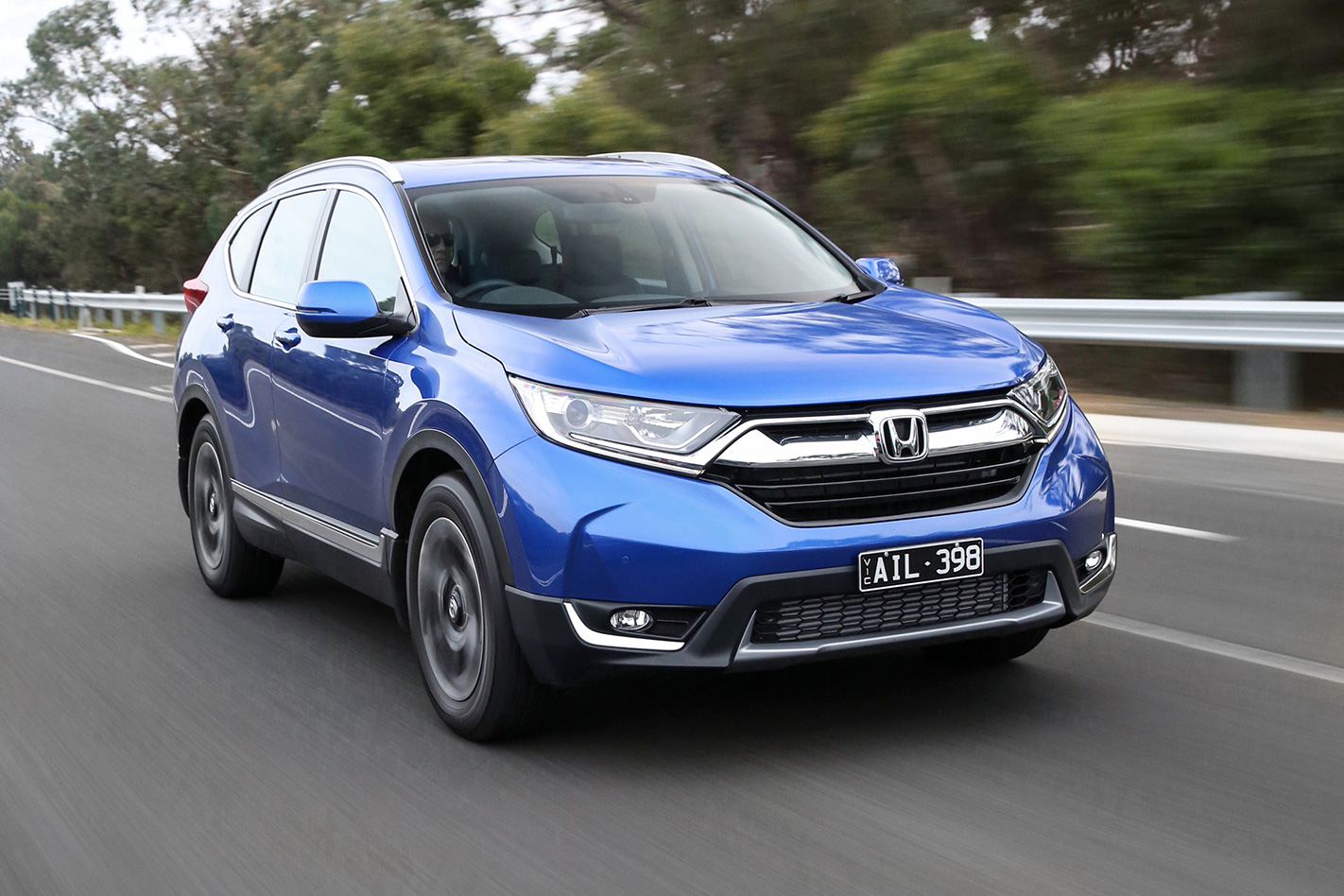 The switch to an all-turbo powertrain line-up is a solid move by Honda, with the Civic-sourced 1.5-litre turbo proving to be a tractable and willing engine that feels less stressed than the outgoing model’s 2.4-litre naturally-aspirated petrol. With 140kW and 240Nm, it’s a stronger engine than the old 2.4 despite its smaller size.

Good forward vision courtesy of slim A-pillars and an elevated seating position. Dimensional tweaks such as a 40mm longer wheelbase and 35mm greater width enhance passenger space too, making it a better people carrier than before. Testament to this is the addition of a seven-seater to the CR-V range – the first to be offered in the Australian market. 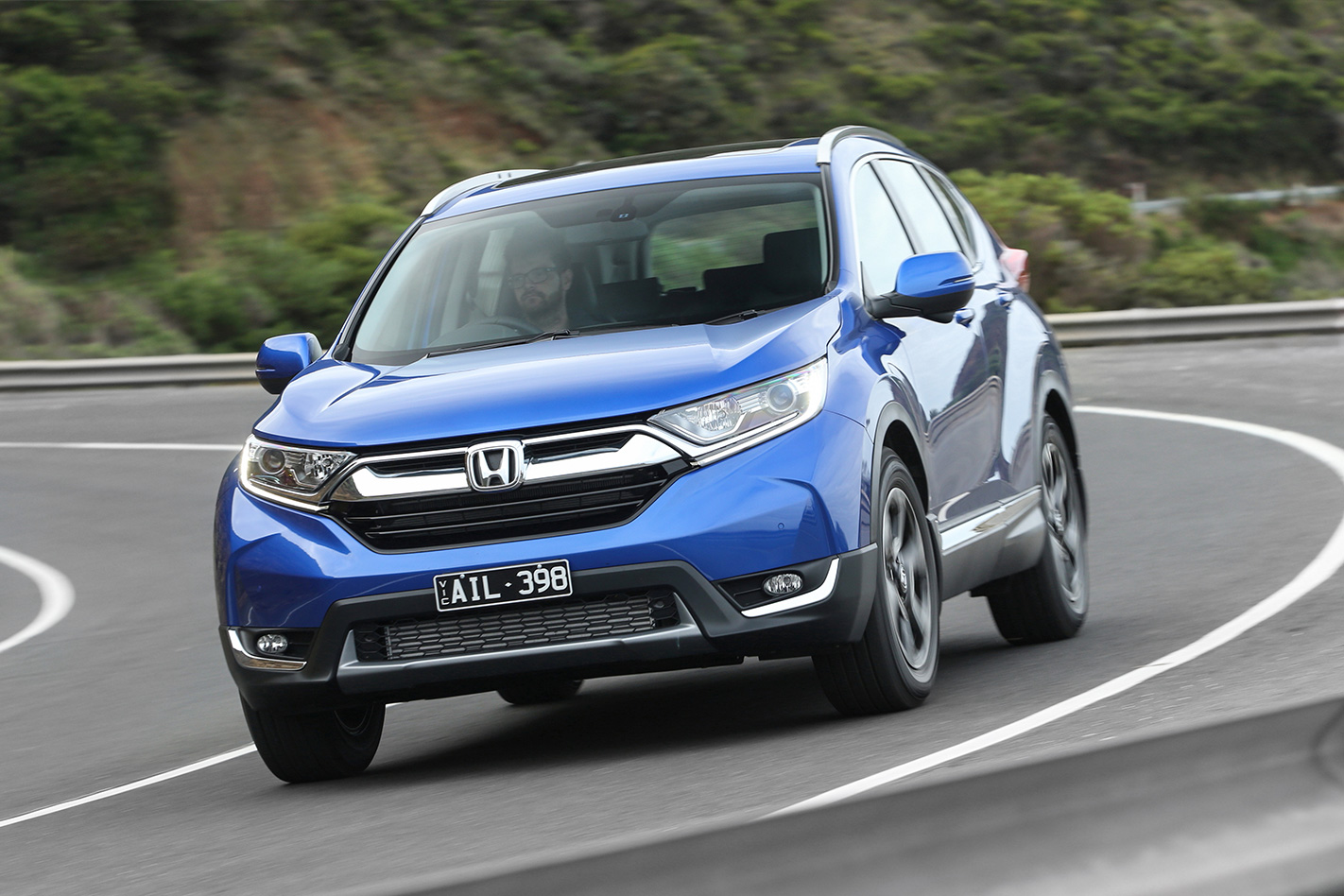 Great ride across the range, regardless of 17-inch or 18-inch wheels. The new CR-V has a pliant suspension that absorbs bumps of all sizes quite well, and recovers from the bigger lumps quickly. There’s very little variation in ride comfort across the range too.

Upmarket interior design with plenty of soft-touch surfaces elevates the CR-V’s interior ambience. The layout should be familiar to anyone trading up from the previous-gen model, with a high-set gear selector, similar steering wheel controls and ventilation buttons, but the execution is more visually interesting and premium-looking.

CR-V boasts a high level of standard equipment, with keyless entry/ignition, dual-zone climate control, front and rear parking sensors, a reversing camera, 7.0-inch colour touchscreen infotainment display and electronic instrument panel being factory-fit across the range. Step into the mid-spec VTi-S – the expected volume-seller of the CR-V family – and you gain a power-operated tailgate, integrated satellite navigation, a rear-facing side view camera and dusk-sensing headlamps, which should leave most shoppers wanting for little more. 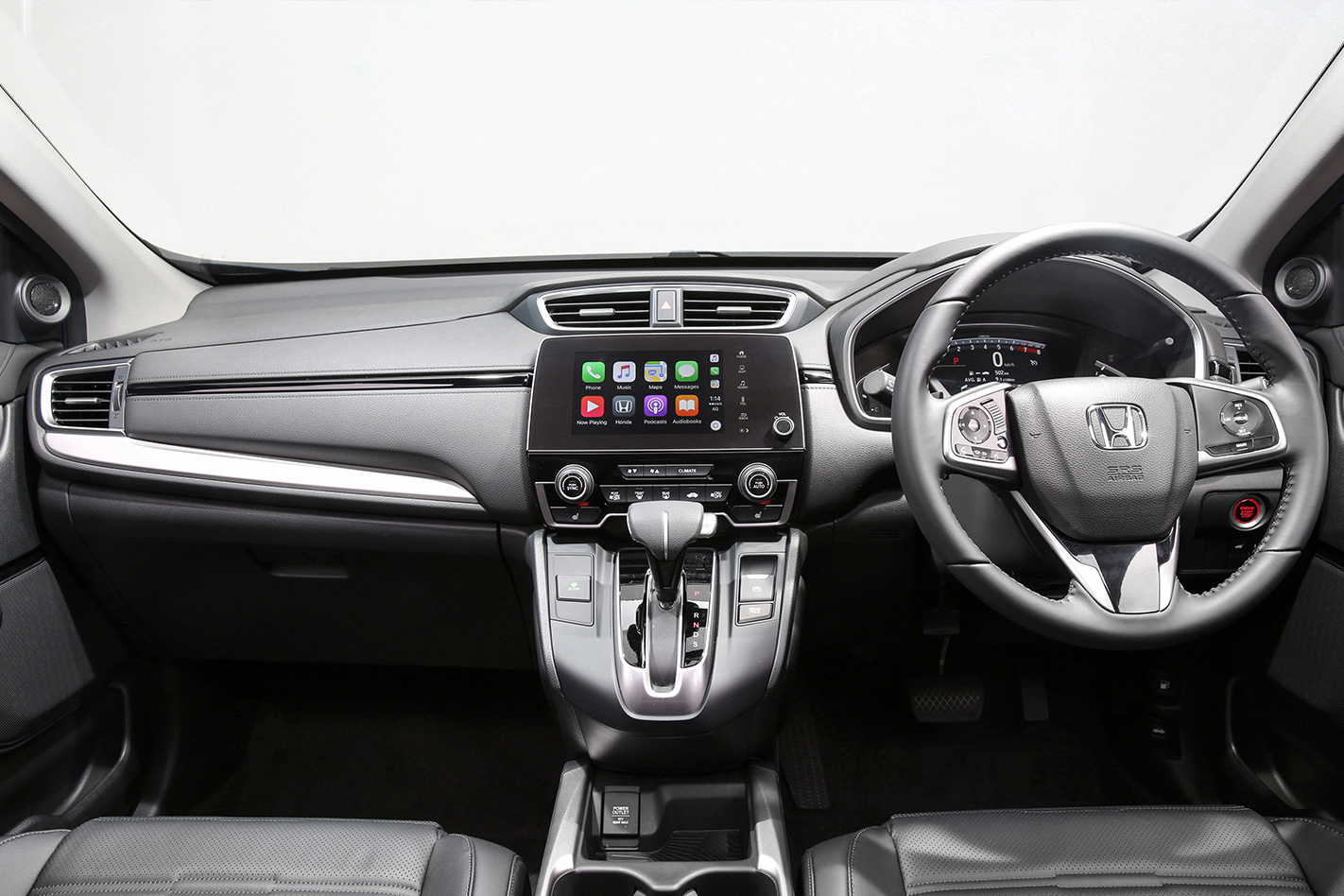 In the seven-seat CR-V, cabin ventilation is taken care of by not only a set of face-level vents for the second row, but also a roof-mounted quartet of swivelling vents with their own individual fan control.

Adjustable backrests feature in both five- and seven-seater CR-Vs, providing a little more long-distance comfort for those in the second row. There’s also a pair of USB charging ports on the rear of the centre console, allowing those in the back to keep their electronic devices charged up on lengthy journeys. Another two USB ports live inside the centre console box between the front seats.

Nifty cabin storage features include flip-out cupholders for the third row and a capacious centre console box that can take items as big as a laptop. Two shopping bag hooks in the boot area keep small loads of groceries from spilling everywhere. 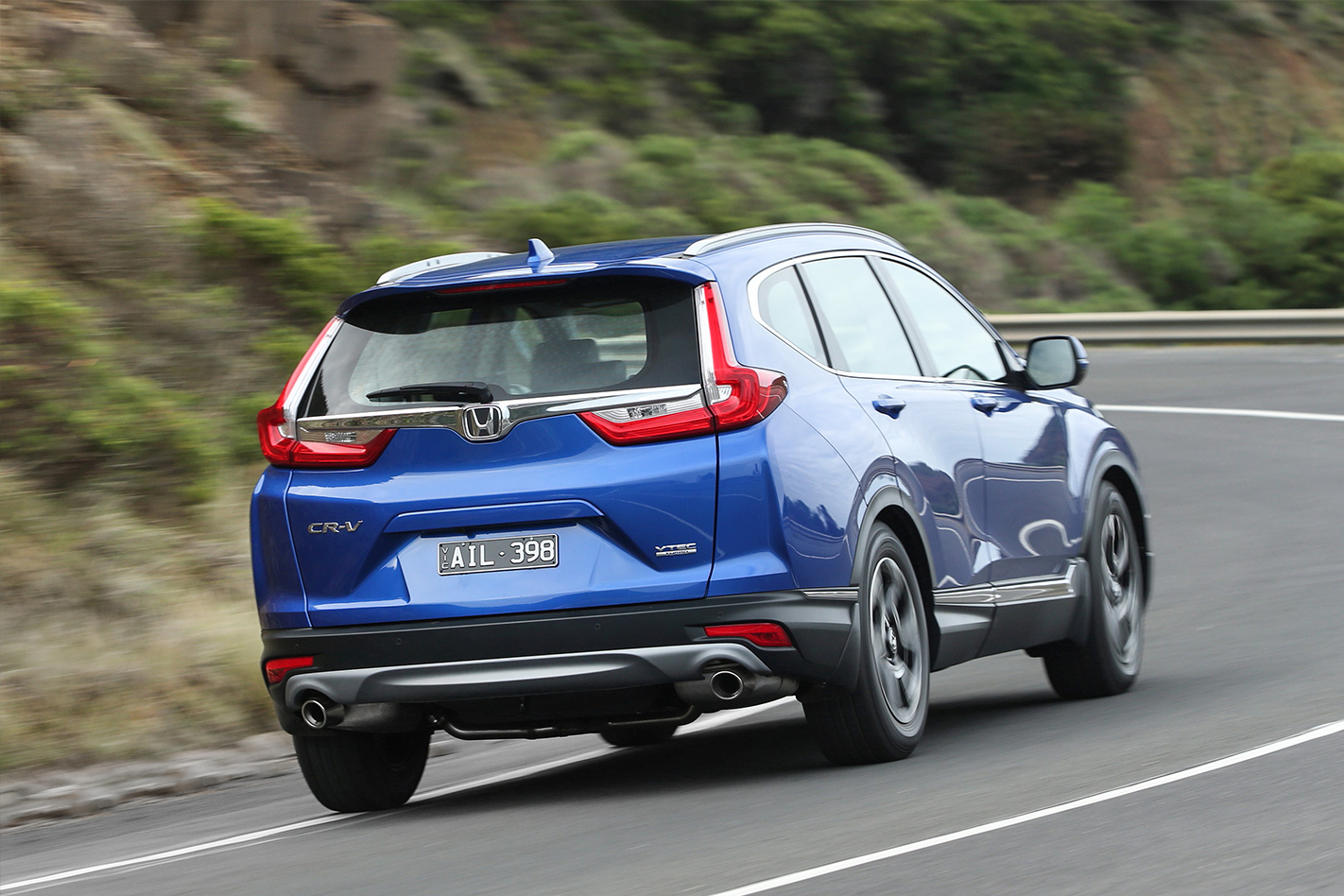 The new CR-V boasts a proactive AWD system that directs a portion of drive to the rear wheels when moving away from standstill at all times, which will help on slippery surfaces where other systems wait for the front wheels to slip before activating AWD mode.

The fifth-generation CR-V has a very low boot floor, which is now longer when the seats are folded down (which is accomplished by convenient seatback release handles in the boot area). With the rear seats up, the 5-seater will carry up to 522 litres of your stuff, up to a maximum of 1084L with the seats folded.

You’ll need to pay big for the high-featured VTi-L in the seven-seat configuration that’s now available for the first time in the CR-V’s history – it’s a $38,990 proposition. The three-row CR-V isn’t available in a lower level of specification, at least for now.

7-seater has a much higher second row bench seat, which puts even average-sized adults quite close to the headlining. As it’s only available in a high-specification VTi-L grade, a glass sunroof is standard-issue and compromises headroom even further.

Another seven-seat-related issue concerns seat comfort and versatility. The seven-seater’s second row seat differs greatly to that of the five-seat CR-V, due to its ability to slide fore and aft as well as tumble forward. As a result, the seat base is flatter and firmer than the five-seater’s and the backrest is less contoured. Overall, it’s less supportive and not as comfortable for rear passengers. 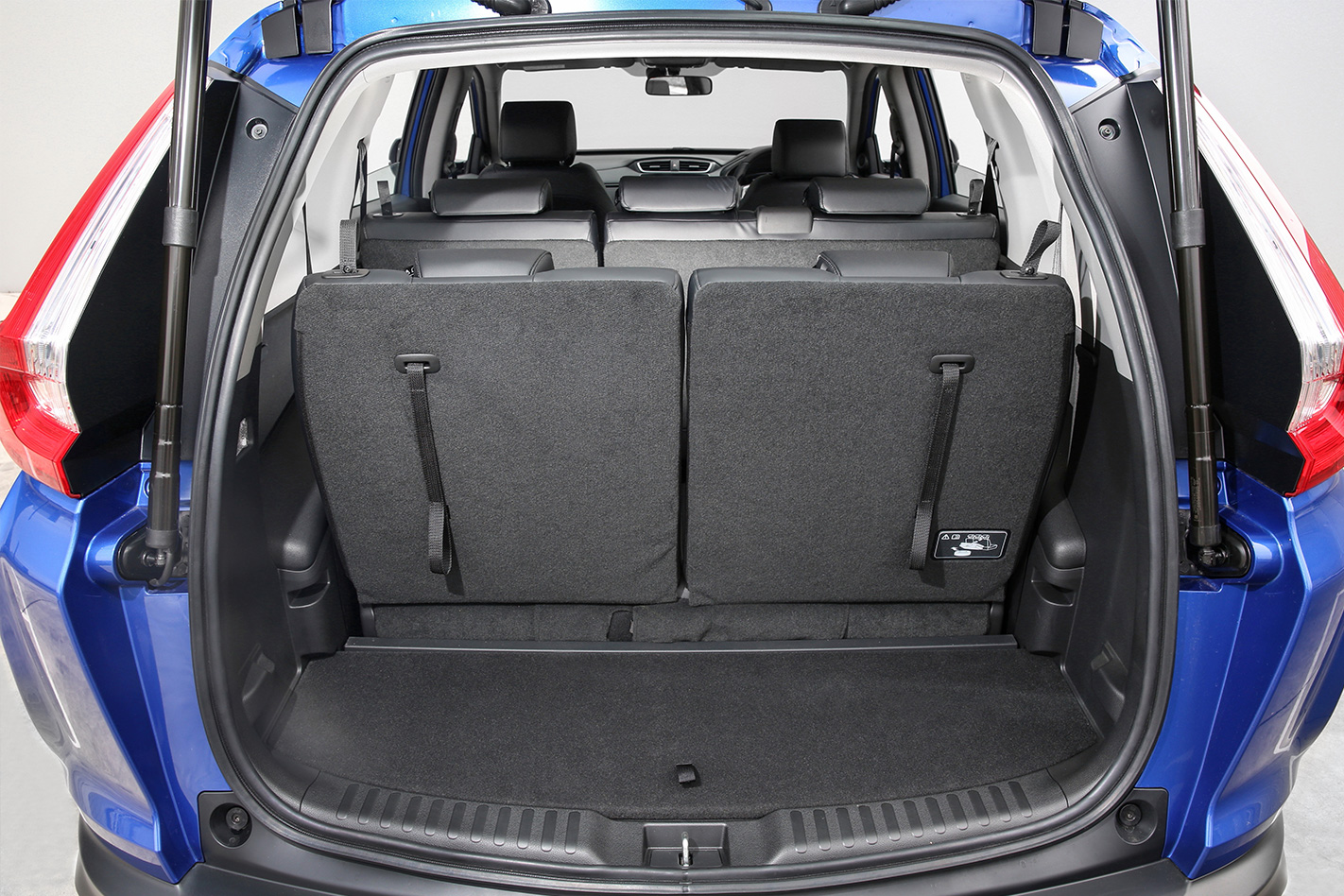 If you were planning on putting a pair of child seats in the CR-V seven-seater, you can pretty much forget about using the third row entirely – the top tether anchorages for the second row are fixed into the roof, right where the heads of third row passengers would be. There’s no provision to mount child seats in the third row either, which limits the versatility of the seven-seater for those with younger children.

There’s no autonomous emergency braking available on any model except the VTi-LX, where it’s bundled with other driver-assist tech like active cruise control, lane departure warning, lane keep assist and collision detection. Honda says it’s working on making the full suite of active safety aids – including autonomous emergency braking – standard across the range, but can’t say when it will be available.

The 7-seater won’t carry as much stuff as the 5-seater, with 472 litres of capacity with the third row folded flat and 967 litres with both rows down. With all three rows of seats raised up, there’s just 150 litres of stowage available.

Right now, only the X-Trail and Outlander come with a seven-seat option. 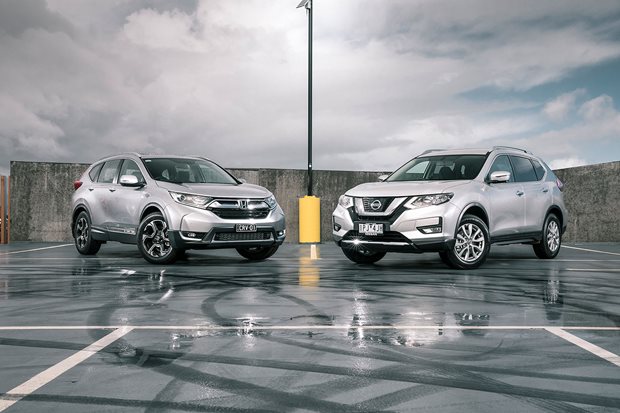 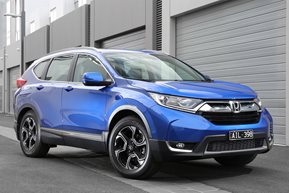