IT’S UNDERSTANDABLE how the Volkswagen Tiguan is viewed as the Golf of medium SUVs.

Based on the MQB modular architectural component tech-fest underpinning most transverse-engined Volkswagen Group cars, the 110TSI Trendline actually is closest to our 2013 COTY-award winning (and enduring benchmark small-car) hatchback. Certainly in terms of lightness and efficiency, including the entry-level front-drive variant’s ultra-sweet 1.4-litre turbo four-pot and seven-speed dual-clutch transmission.

Given the Golf’s supremacy, we expected the Wolfsburg crossover to bulldoze all before it. So how is second place even possible with such guaranteed genetic goodness, particularly when the list of pros comprehensively outweighs the cons? 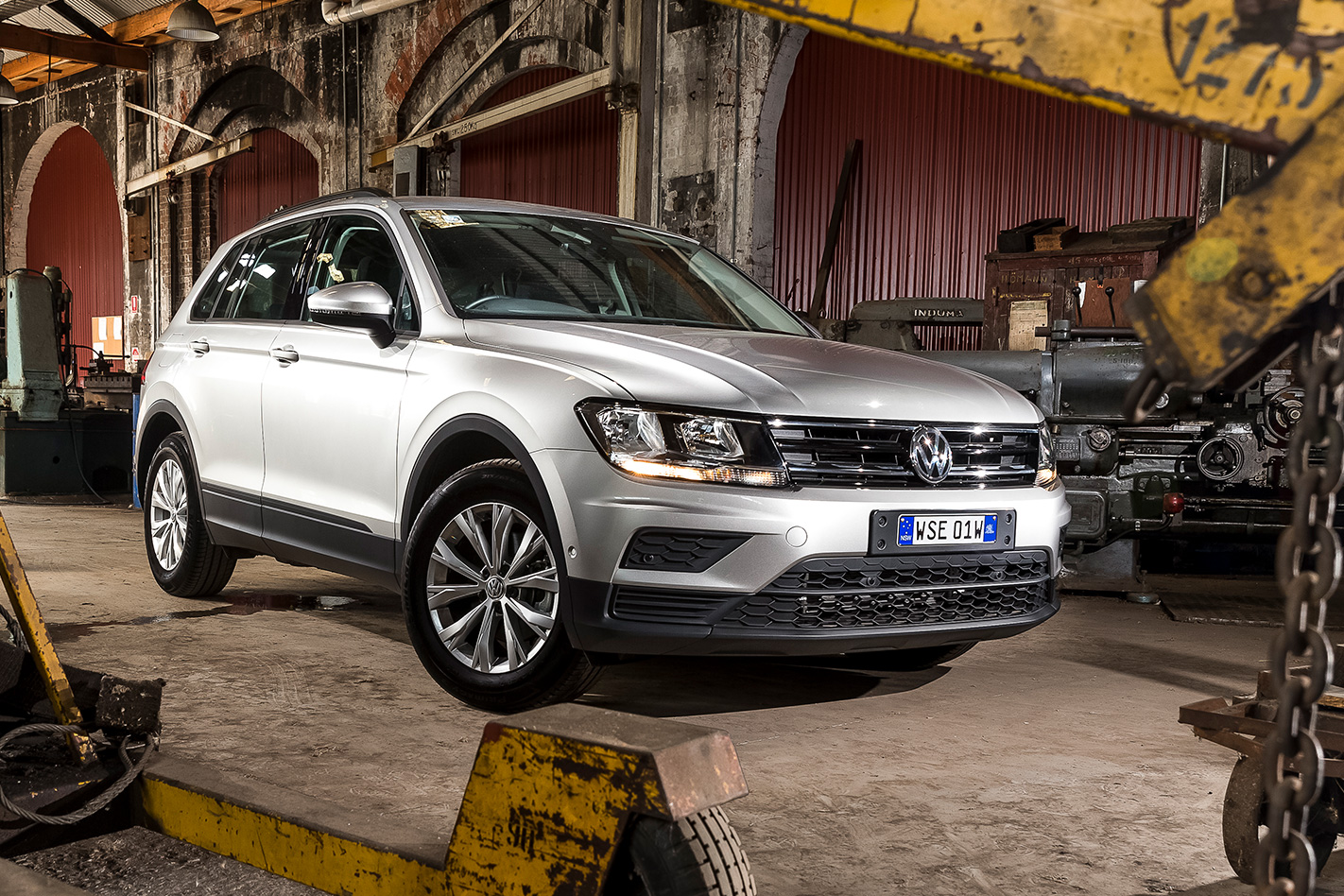 Significantly larger, longer and wider than its dinky predecessor, the second-gen Tiguan is a packaging knockout, offering an exceptionally airy, spacious and solid cabin environment infused with palpable quality. Anybody familiar with any contemporary Volkswagen will instantly connect with the elegant instrumentation, superbly crafted steering wheel, sensible central touchscreen interface, firm yet ably supportive seating, and the almost sensual tactility of materials.

In this base Trendline we identified 10 surprise-and-delight features none of the others offer, such as flocked door bins, a ratchet-actuated height-and-length adjustable central armrest, infinitely adjustable front-seat reclining mechanism, climate-controlled glovebox, proximity-sensitive multimedia interface, louvered cupholder jalousie, a frameless rear-view mirror, and a sliding back seat. Only one other SUV here features remote-control window operation (Escape), and another a passenger-seat height adjuster (CX-5).

READ NEXT: 2017 Volkswagen Tiguan: which spec is best?

Yet visible expanses of plain vinyl trim and the lack of a centre armrest does make Tiguan’s rear quarters feel somewhat austere, particularly compared to the salubrious-looking Mazda. Lucky that Teflon-smooth engine reclaims some of that premium goodness. 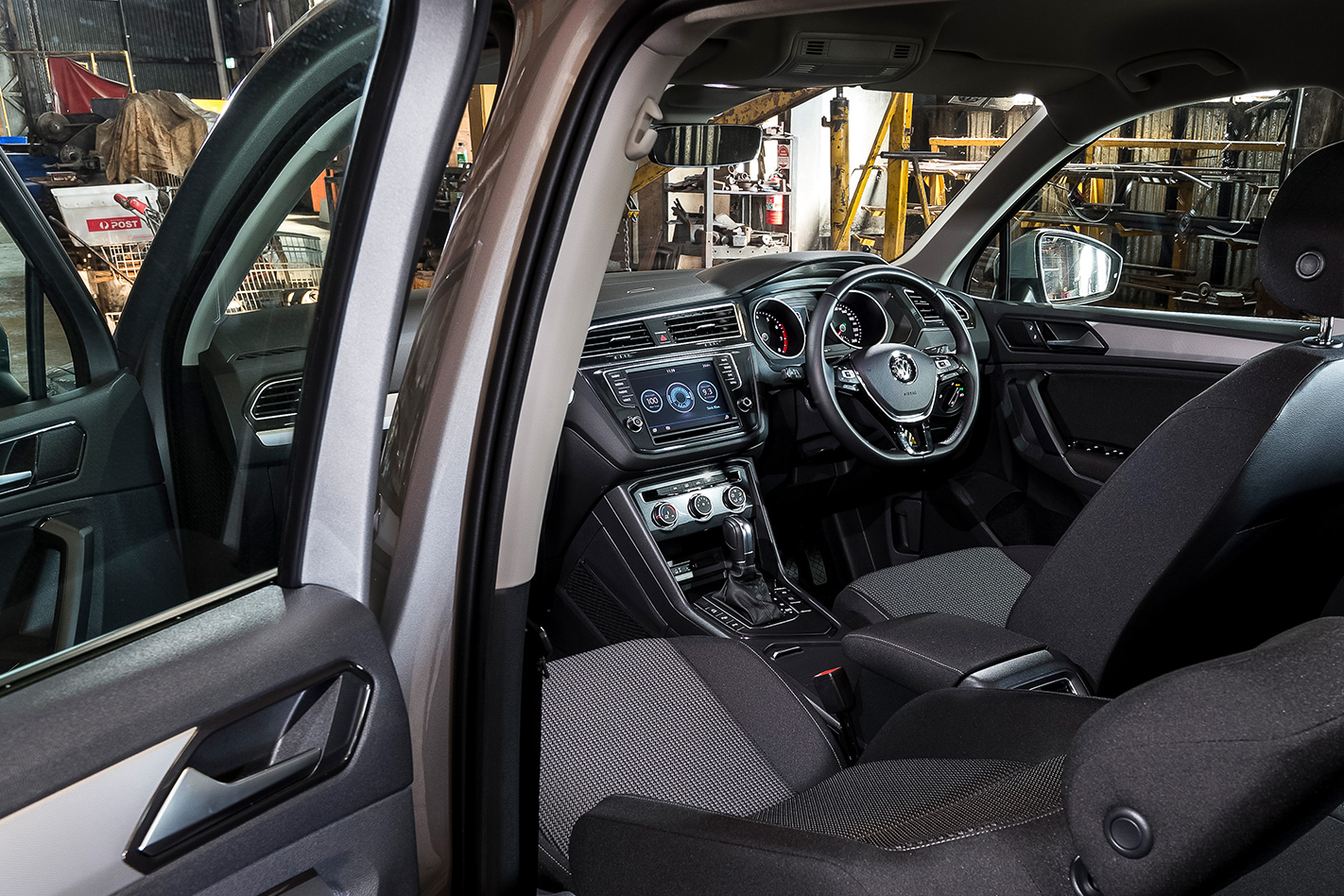 Marginally the quickest yet clearly the most economical, Wolfsburg’s 110kW 1395cc firecracker infuses the Tiguan with waterslide levels of slickness. Half a second ahead of the next-best to 100km/h, first to 400m and quickest in both the 30-70km/h and 80-120km/h brackets, it’s also the most parsimonious on petrol by nearly a litre. The almost viceless Tiguan proudly upholds the Golf’s mantle of unassailable efficiency. What a joy… in the right conditions.

That’s what makes the laggy nothing-then-everything step-off acceleration all the more infuriating, especially when accompanied by front axle tramp that turns violent over damp roads. Difficult to modulate in heavy traffic, you wonder whether Volkswagen’s engineers actually fully validated the 1.4 DSG combo. Living with it in wet peak-hour commutes would have us crying out for even the Outlander’s soul-sapping CVT. Our advice is to avoid infuriation by choosing the delightful, and cheaper, six-speed manual base Tiguan instead (the same applies to the Ford Escape too, BTW.) 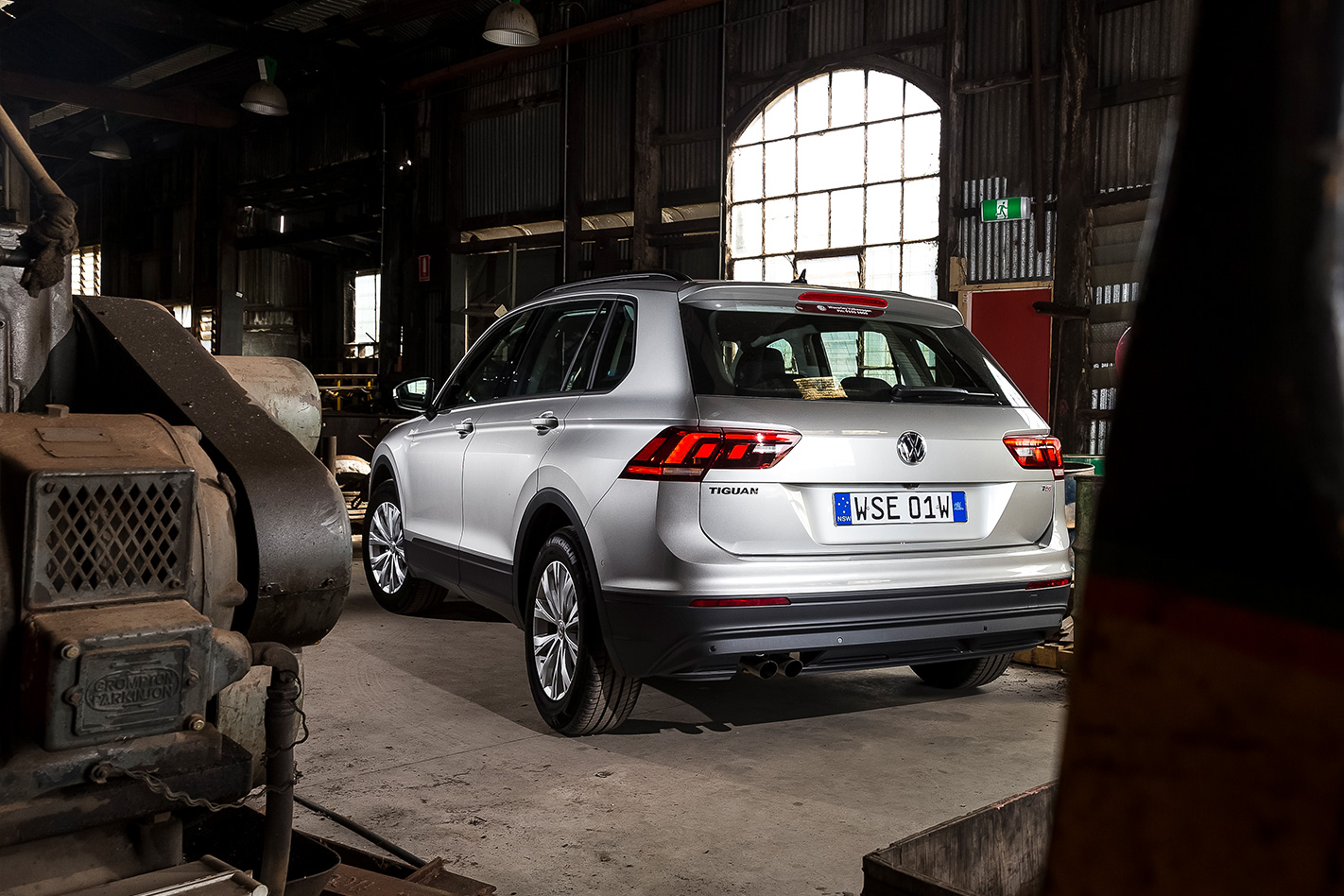 A similar snatching-defeat-from-the-jaws-of-victory scenario sullies the Tiguan’s almost supernaturally gifted steering, handling and roadholding characteristics. When the roads and environment align, nothing here touches the 110TSI’s suave cornering speed, incisive handling and fearless body control. This thing can reel in a mountain pass with the killer instinct and confidence of a warm hatch.

But there’s an inevitable but. Unless traversing glassy surfaces, the ride always feels agitated, with excessive (for a Volkswagen) road noise joining the unsettled suspension. This particular Golf-on-stilts is just too stiff-legged for a family hauler. Earth calling Wolfsburg: time to democratise those adaptive dampers! The $50K-plus Tiguan R-Line is way beyond the reach of this lowly end of the medium SUV class. 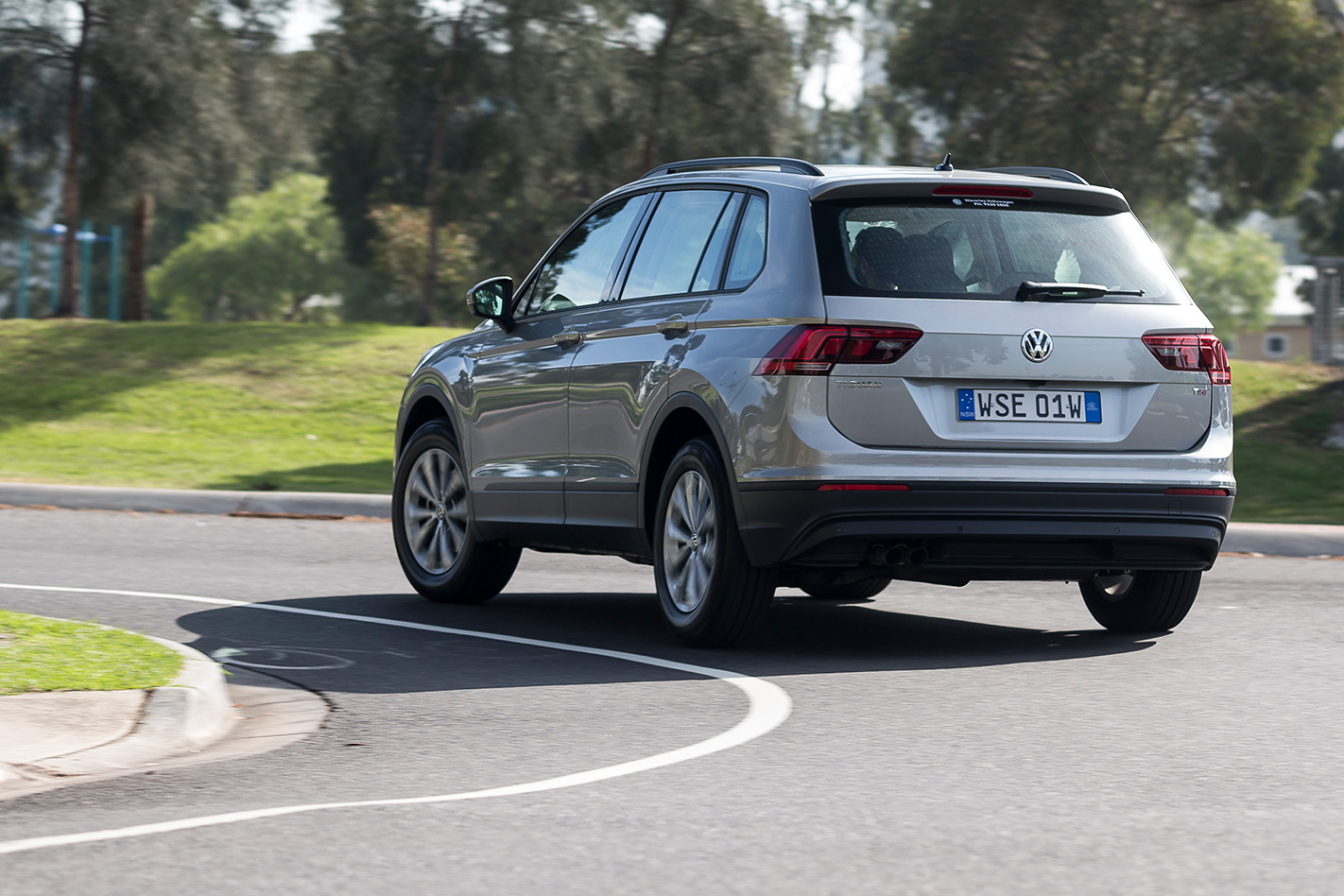 This, and the jerky powertrain progress, is why the Tiguan ultimately sounds and feels more like an Octavia (which is a plus-sized, 10-percent-inferior Golf in Skoda drag) than the iconic Wolfsburg hatch. Not the leap forward in refinement over its predecessor that this Megatest’s winner so clearly is, VW needs to finish finessing its otherwise brilliant medium SUV. 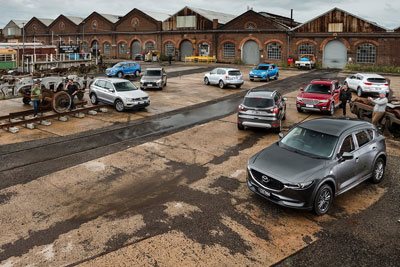 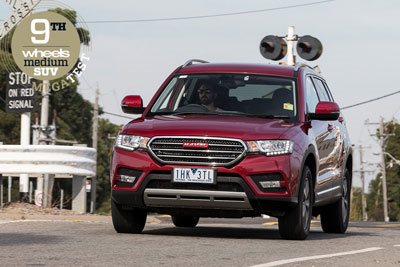 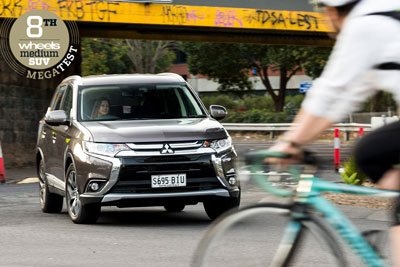 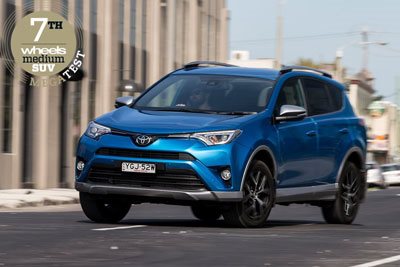 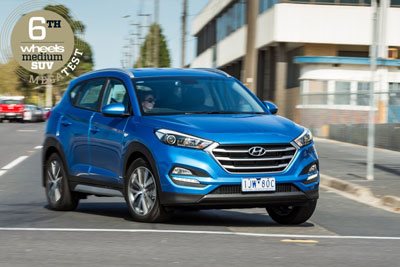 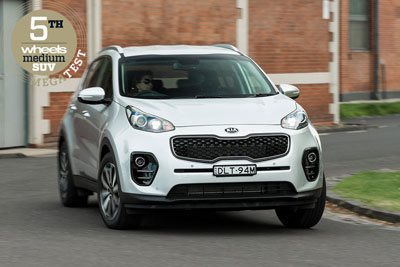 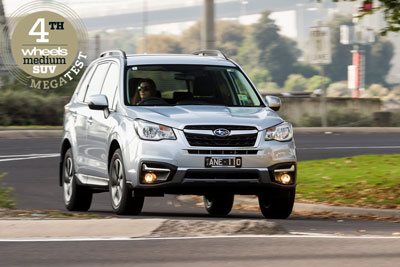 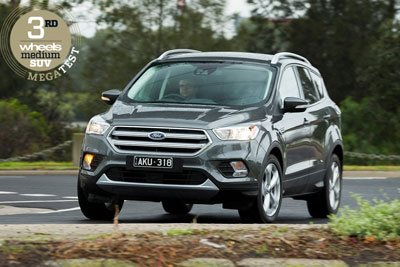 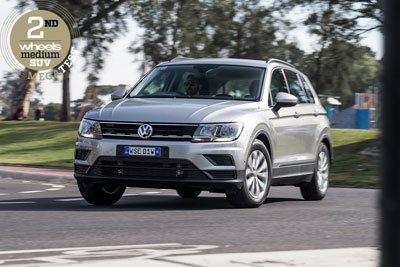 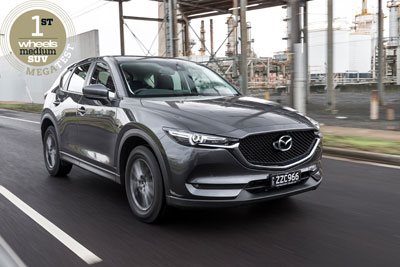 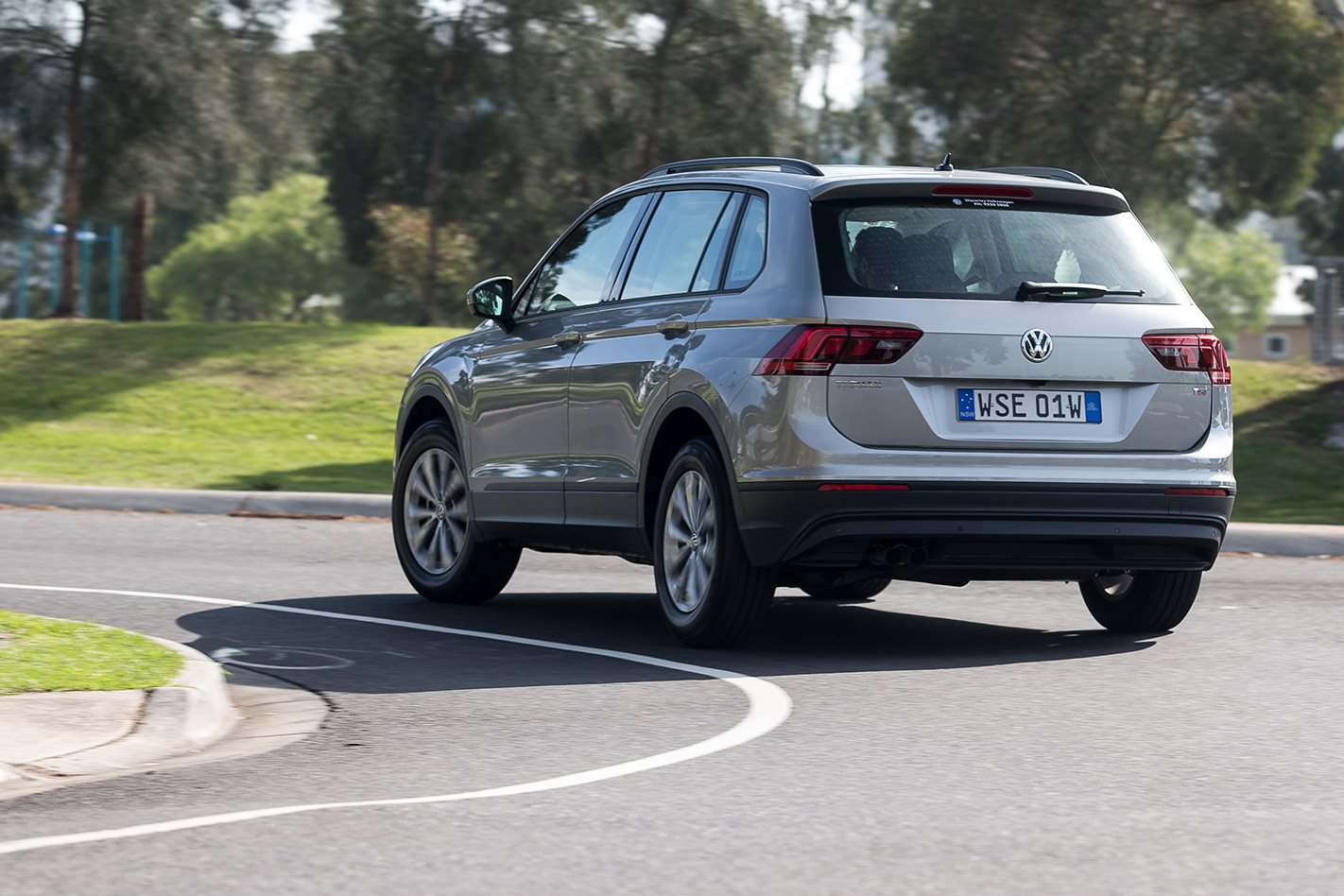 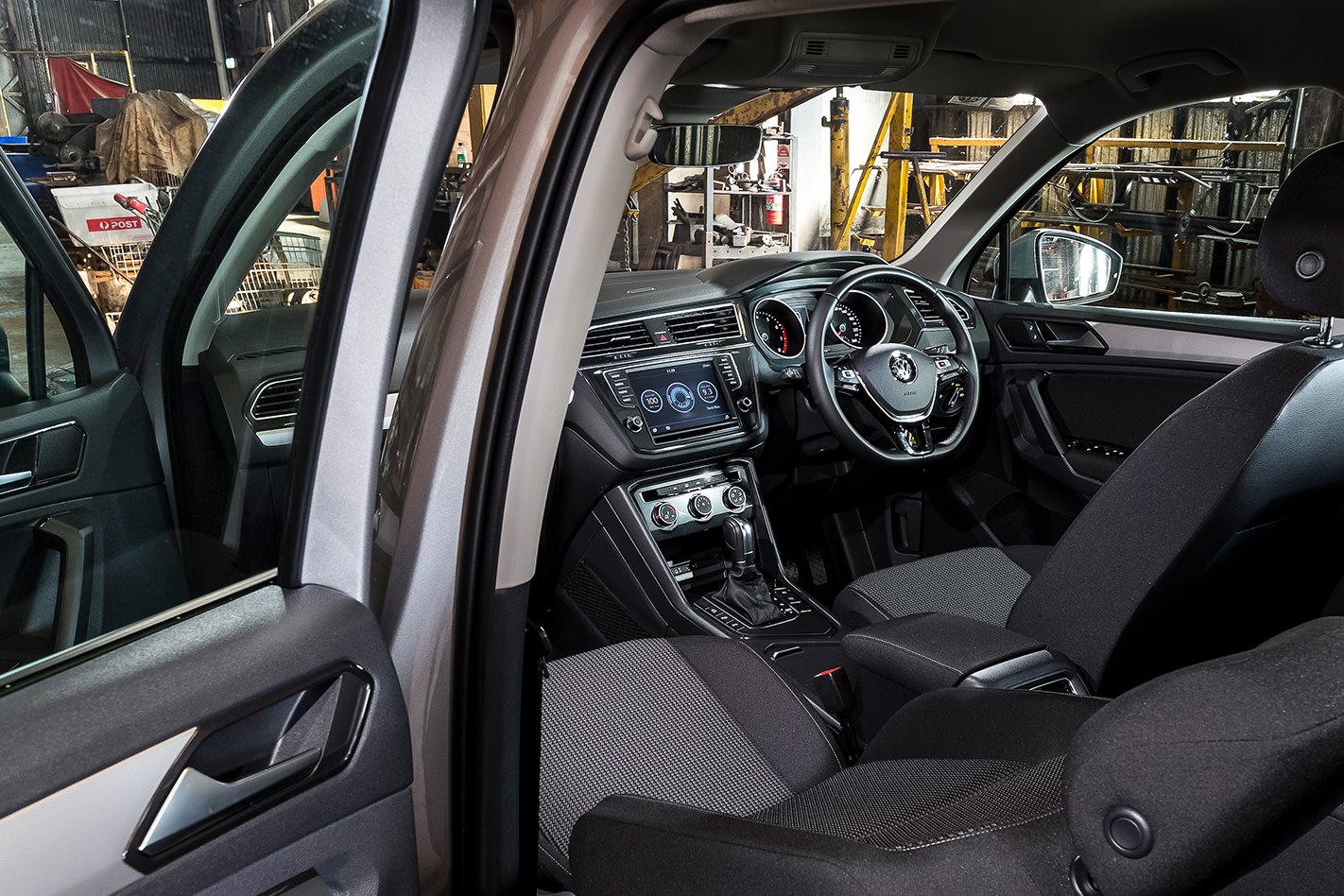 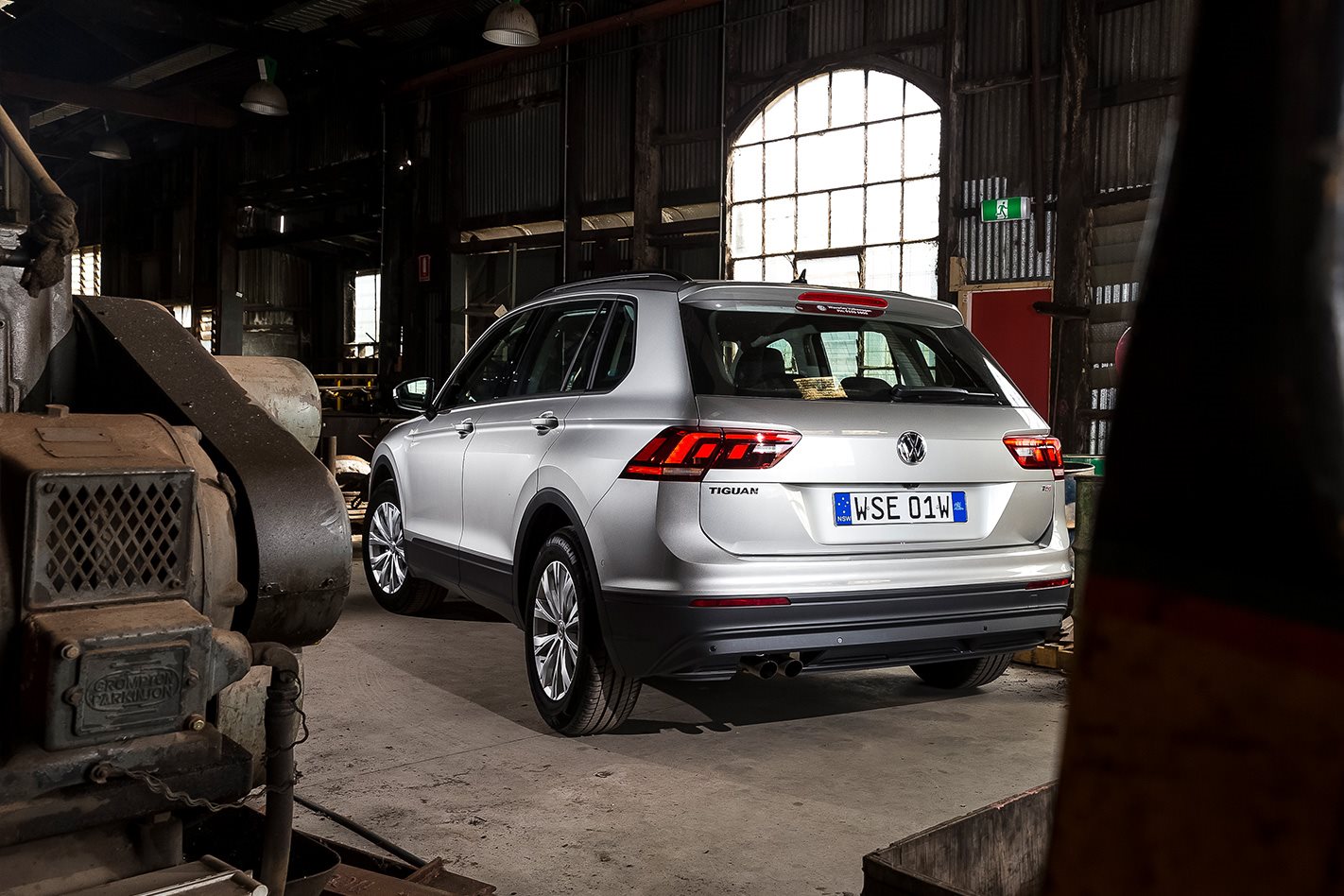 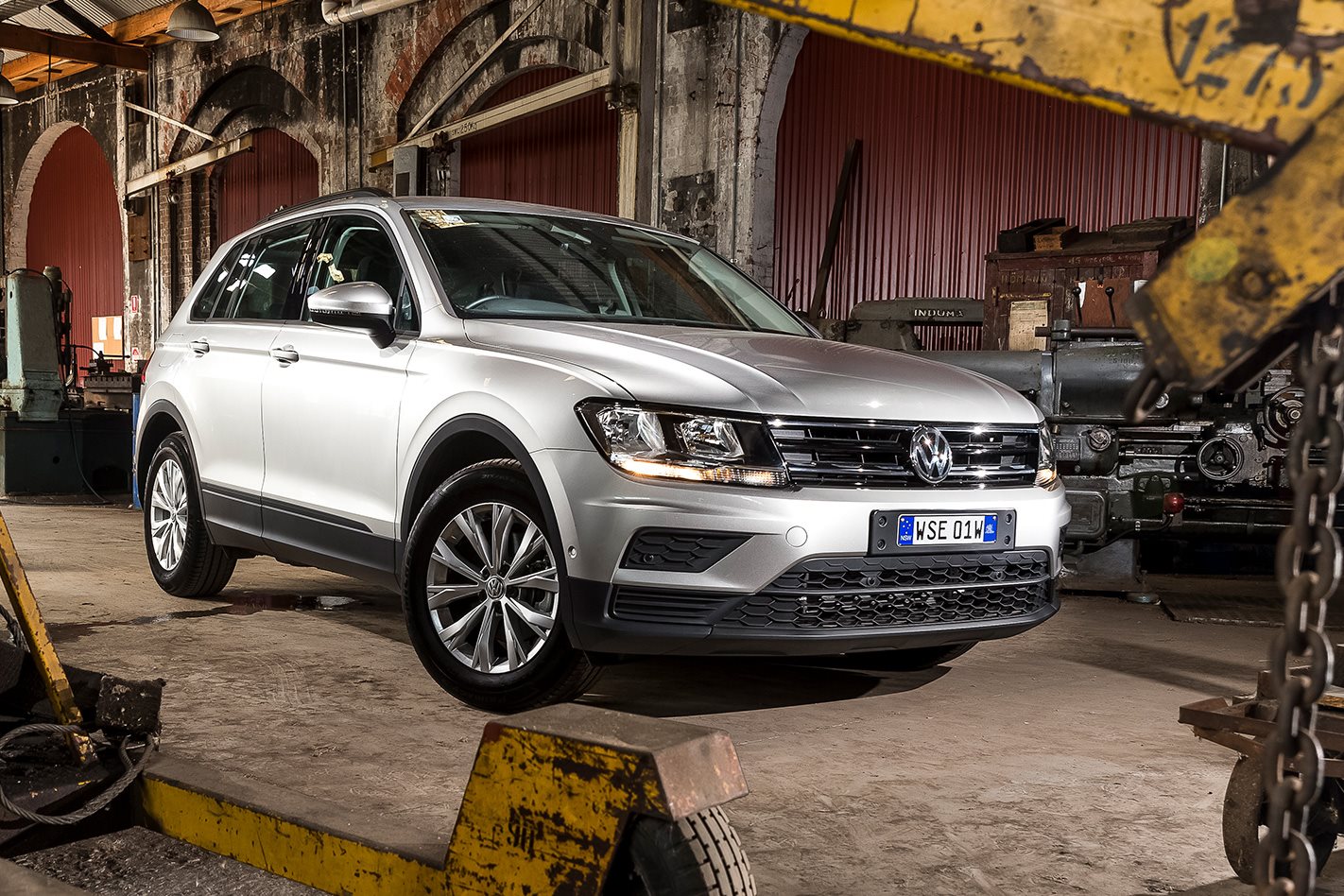 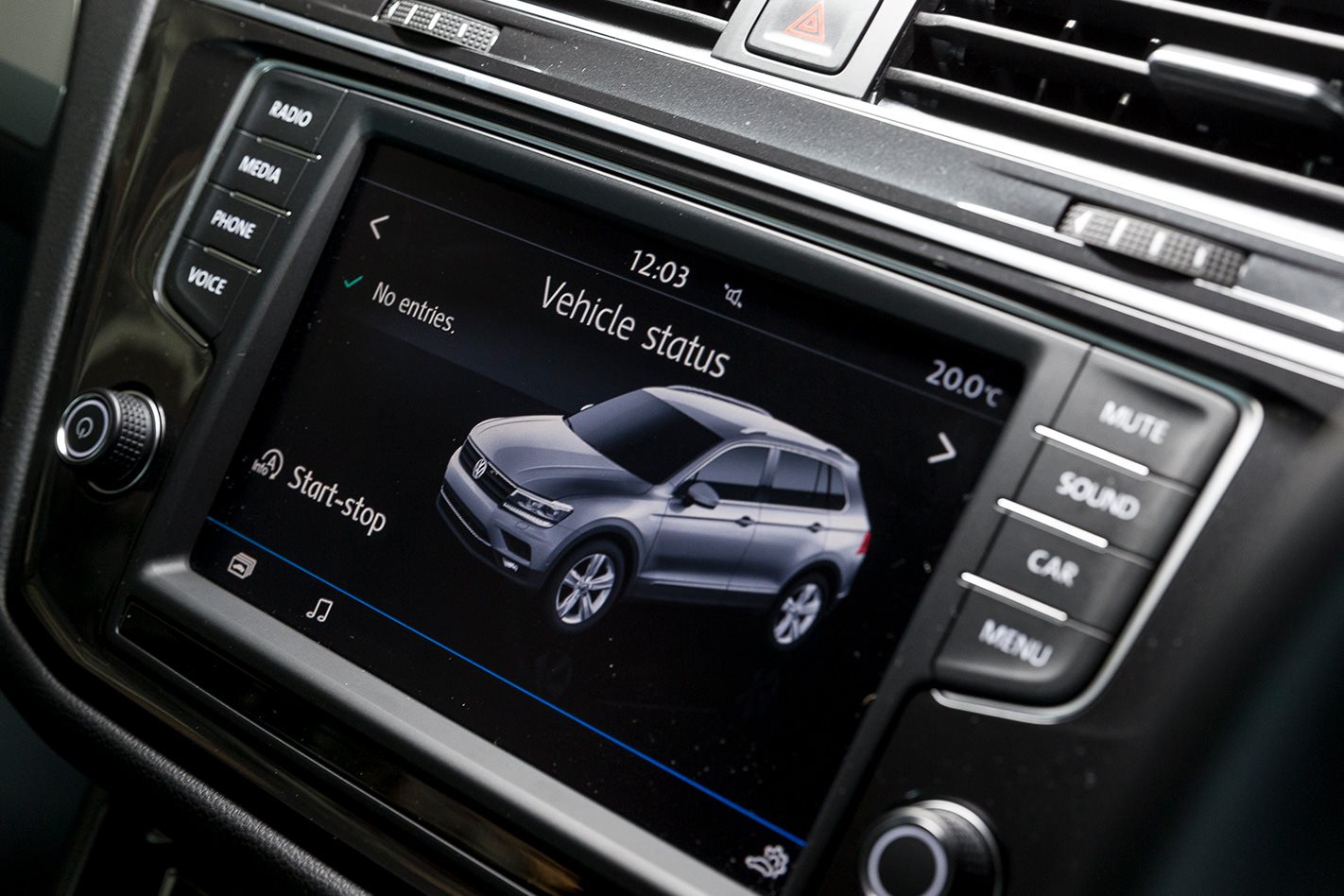