The X5 has been a staple part of BMW’s showroom ever since the first-generation model arrived back in 2001, and has arguably played a pivotal role in defining the large luxury SUV category since.

And now we have a new one. The X5 has grown up (and outward) with the arrival of the fourth-generation ‘G05’ range, and it now plays host to an impressive array of in-car technology. On top of that, the new X5 boasts one of the most spacious and luxurious cabins of any BMW. It’s deeply impressive even before you hit the starter button, but are there any chinks in the 2019 BMW X5’s gleaming armour?

We hit the roads of Tasmania behind the wheel of the entry-level X5 xDrive30d and its performance-oriented M50d sibling to find out.

Right now the range begins at $112,990 for the 3.0-litre turbo diesel X5 xDrive30d, the same price as its predecessor but the value equation has been sharpened by the addition of a swathe of new equipment. We'll get to that in the next section.

Wondering where the previous model’s rear-wheel drive, sub-$100K, four-cylinder sDrive20d variant has gone? It’s not currently confirmed for the new-gen X5 in this country, however we’re told it’s on the cards for a local launch sometime later in 2019.

All new X5s will also boast a park assist feature that automatically remembers the last 50 metres of the car’s route before parking, and can retrace its exact path in reverse without any steering input from the driver. Handy, if you had to drive into a tight carpark.

That’s on top of carry-over features like a powered tailgate, panoramic glass sunroof, leather upholstery, digital radio, a head-up display, self-dimming mirrors, internet connectivity and power-adjustable seats. Not bad for a ‘base’ model.

The arrival of the G05 model also sees laser headlamps, four-zone climate control, adaptive M suspension, rear steering, heated and cooled front cupholders, an active rear differential and soft-closing doors added to the standard equipment list. Are options even necessary anymore? That’s perhaps debateable, however the 30d, 40i and M50d can nevertheless be optioned up to an even higher level. For example, there are 11 wheels designs to choose from, in sizes ranging from 19 to 22 inches, along with 9 leather upholstery options, eight exterior colours and seven cabin trim choices. Height is also slightly up, but perhaps the most important measurement is the new X5’s wheelbase, which has grown by 42mm to sit at 2.975 metres long. That helps liberate more cabin space for passengers, though primarily for those in the first and second rows of seating. While a fold-out third row is still available as an option on the X5, those extra seats are still more suited to kids than they are to adults.

The boot remains at 650 litres with the second row raised, increasing to 1870 litres with those seats folded down. As with the outgoing X5, that area is accessed via a horizontally-split tailgate. 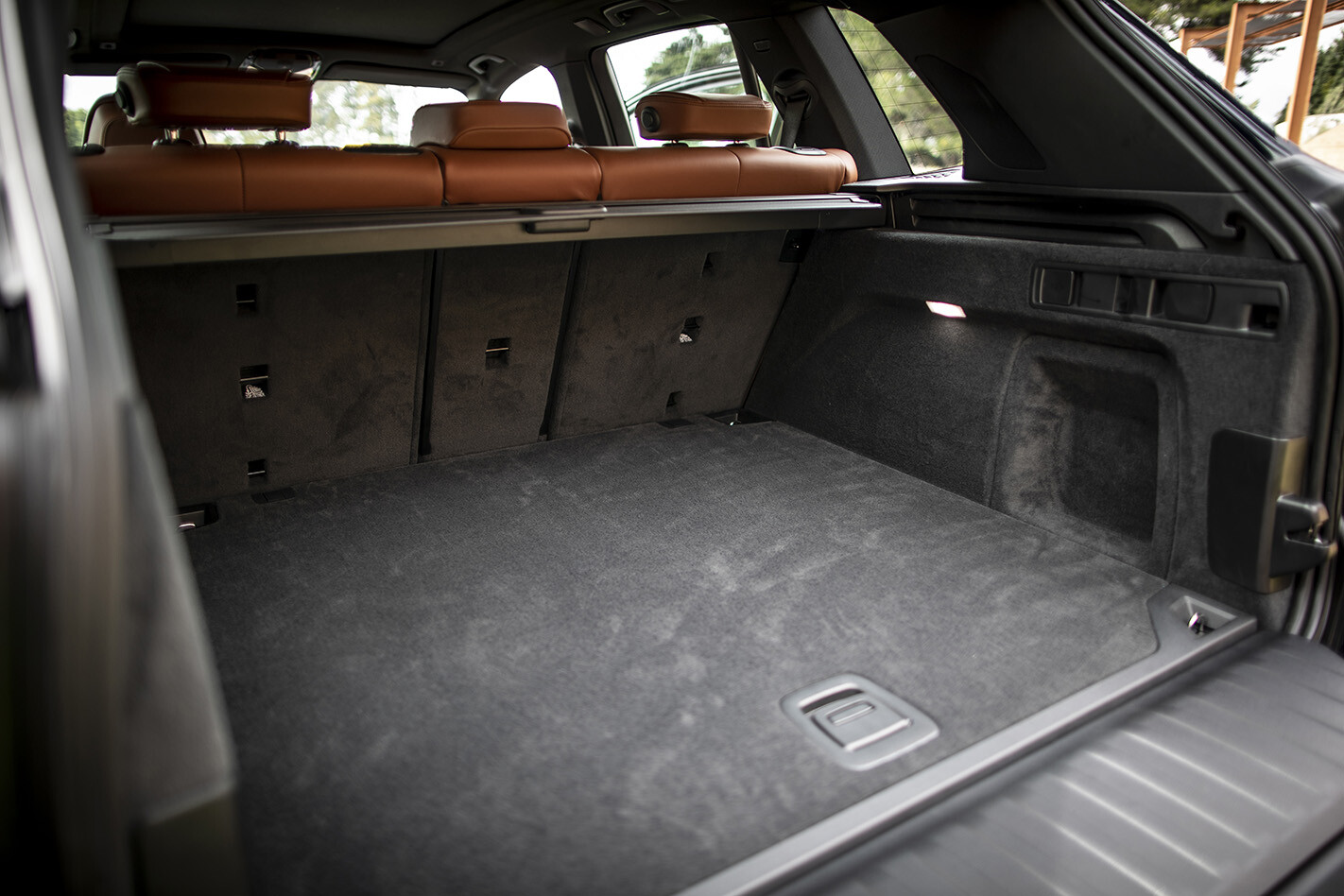 The first thing that hits you when you enter the new X5 is the sheer premium-ness of its presentation. Everything looks high end, from the graphics of the 12.3-inch colour LCD that replaces the traditional instrument cluster through to the knurled radius of the volume knob, and more importantly it all feels high-end too. Even on an option-less 30d.

But there’s scope to wind up the luxe too. A cut crystal gear lever, starter button and iDrive dial have significant bling appeal, and there’s an extensive menu of leather options that feel softer and smell nicer the further up you go. Of course, these don’t come for free.

However the good news is that even if you can’t spring for an option pack or two, the X5 still feels like a significant step forward from its predecessor. Cabin comfort is excellent, with even more space in the rear seat and comfy sports seats at the front, but the technology on offer helps make it even more pleasant.

Integrated mounts for tablet holders and other accessories are fitted to the rear of all X5 front seats, and come with a USB-C charging port as standard. There are further device charging options in the centre console too (as well as an available wireless charging pad), while a large head-up display helps keep the driver’s eyes on the road, where they belong.

The new all-electronic instrument panel may lack the customisability of what some rival brands offer – principally Mercedes-Benz and Audi – but the graphics are crisp, clear, and it’ll also repeat the sat-nav display between the speedo and tachometer. BMW’s new voice assistant is also a nifty feature, with things like the lighting, audio and climate control able to be changed entirely by speech commands.

However when it comes to ride comfort the new X5 delivers a patchier report card. On the standard steel springs and 20-inch alloys of the 30d it rides fairly well, if a little sharp-edged, however that sharpness only becomes more pronounced when you step into the M50d (which also rides on coil springs, but with adaptive dampers and 22-inch wheels). It’s acceptable in most conditions, but on properly choppy roads its impact harshness can wear thin after a while.

And that makes the optional two-axle air suspension a box worth ticking. It’ll add $2300 to the retail price, but it transforms the X5’s ride from “slightly brittle” to “definitely brilliant”. Unfortunately, the cushy air-sprung option isn’t compatible with the M50d’s performance-oriented suspension hardware.

You wouldn’t think it of a two-tonne-plus large SUV, but the new X5 actually delivers plenty of driving joy. Even the 30d drives well, with light but accurate electric steering and an authoritative front end providing confidence-boosting levels of cornering ability, while also providing a turning circle tight enough to easily position the hulking X5 in a crowded carpark.

The M50d, naturally, boasts even more handling talent courtesy of its adaptive dampers, low-profile tyres, torque-vectoring rear differential, active roll stabilisation and rear wheel steering. It seems inappropriate to drive a large SUV like a sportscar, but the M50d makes it possible. The upcoming X5M should be properly mega.

The underpinnings are certainly impressive, but the real stars are the engines. Whether in single-turbo 195kW/620Nm 30d form or the quad-turbo beast that is the 294kW/760Nm M50d, the 2019 X5’s 3.0-litre turbo diesel powertrains are exceptionally tractable and astonishingly refined. Throughout the entire rev range there’s barely a hint of their diesel nature, that’s how hushed they are. In fact, the biggest clues of their diesel diet is the 5000rpm redline and meaty low-end torque delivery – sound and vibration are at petrol-like levels.

And the thrust they deliver is superb. Few will be left wanting by the 30d, and few will fail to be impressed by the M50d’s muscularity. Both are backed up by a smooth-shifting eight speed auto that offers similar refinement, and the X5’s mechanicals are in their element when cruising at highway speeds. It may look familiar from twenty paces, but the X5 has certainly come a long way over the past three generations and 17 years.

It’s the most technologically advanced BMW on sale, and if it’s a preview of what’s in store for future new models then the Bavarian brand is appears to be on a good trajectory. Beyond that, however, it fulfils the brief of being a generously-equipped, family-sized, premium SUV admirably well, while also mixing in plenty of driver engagement too.

The sometimes harsh ride can be a drawback, but it’s remedied easily by going for the optional air suspension on the 30d. The M50d is unable to enjoy that level of suppleness, but we’re going to assume that if you’re gravitating toward that quad-turbo monster, ‘ride comfort’ likely isn’t all that high on your list of priorities.