What is the Mercedes-AMG GLB 35? Is it a hot hatch on stilts? A breeder bus wearing activewear? Another performance SUV with delusions of grandeur? To varying extents, it is all of these things, but it’s also an interesting addition to the Australian marketplace.

Mercedes already offers a GLA compact SUV and a GLC mid-size SUV but it didn’t want that spare letter going to waste. According to Britta Seeger, board member responsible for Mercedes-Benz car sales: “Every third Mercedes is now an SUV, every fourth a compact car, so a compact SUV such as the GLB blends all the success factors of our two highest-volume segments.” 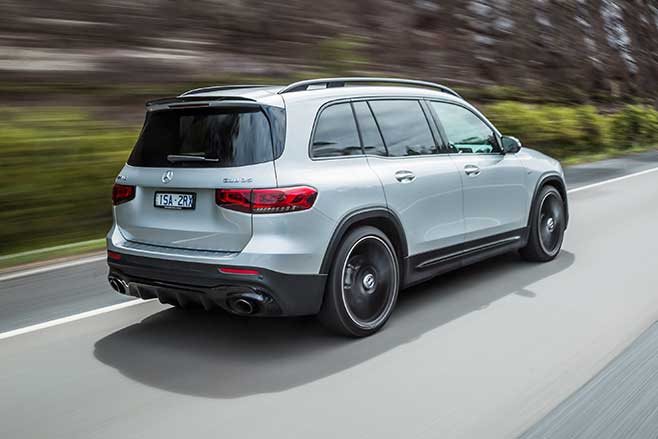 Makes sense, but combining two successful genres doesn’t automatically result in something great. Remember when they combined hip-hop and heavy metal? We ended up with Limp Bizkit. Nevertheless, as the naming convention suggests, the GLB makes sense if you align it with the corresponding Mercedes passenger car.

READ Five SUVs to look out for in 2021
Just as the B-Class is the choice for buyers who prioritise substance (in this case practicality) over style, the GLB is designed for families. Indeed, there are two full pages in the press material dedicated to the GLB’s “kid friendliness”. Mercedes has taken this seriously.

Starting with the A-Class platform, the wheelbase is extended by 100mm to make the GLB very similar in length to the larger GLC – just 24mm separate the two. This not only gives the compact GLB greater luggage carrying capability than its bigger brother, up to 560L or a plentiful 1755L with all seats folded away, but also the option to fold out the third row of seats. 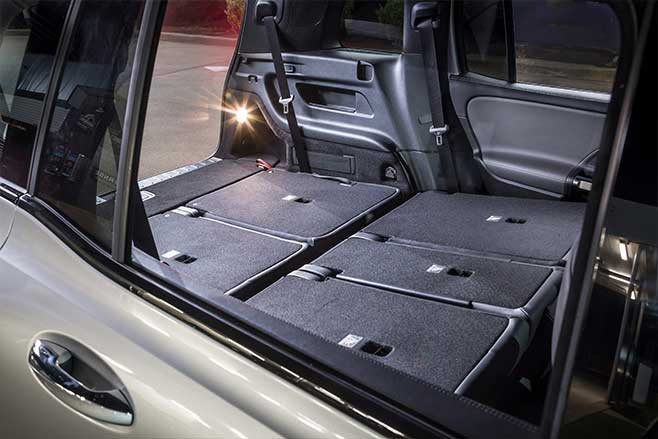 The final row is not an afterthought, either, with USB charge points, outboard storage, central cupholders, head restraints and window airbags, which is presumably why occupants are limited to 168cm in height. To be honest, there’s sufficient room that adults wouldn’t complain on short trips so smaller humans should have plenty of space.

READ Australia's cheapest seven-seat SUVs
This rear row folds away flat while the middle row can be adjusted fore-aft by up to 140mm and folds away 40:20:40 for maximum flexibility. There are also fixing points to accommodate four child seats should you so require. 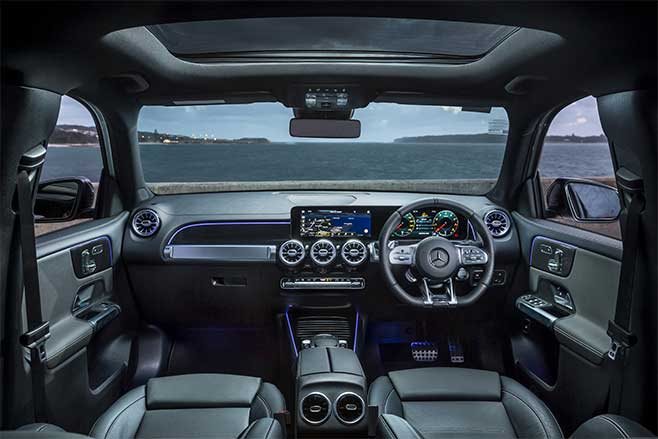 Up front, the GLB 35 attempts to justify its $88,900 price tag (before options and on-roads) by including plenty of bells and whistles. There are dual 10.25-inch screens, one for the infotainment and one for the customisable digital instrument display, heated sports seats, AMG performance steering wheel, nine-speaker sound system and panoramic sunroof as standard. 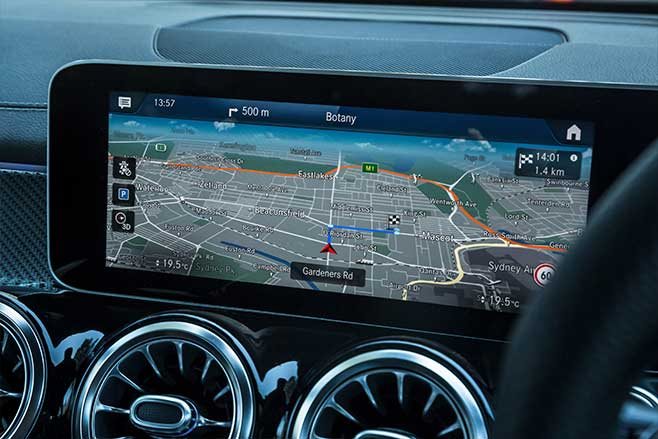 While the interior is very flashy you don’t have to look too far to see where money has been saved, with hard scratchy plastics within easy reach and the leather doesn’t feel particularly premium. The second row is also quite flat and bench-like with insufficient under-thigh support, though that won’t be an issue with kid seats perched upon it, and there is plenty of space. 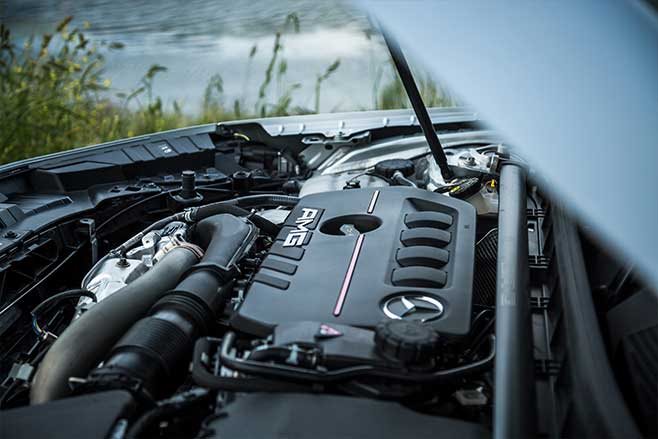 The all-wheel-drive system is AMG’s, with a quicker-acting electro-mechanically controlled clutch that can send up to 50 percent of the drive to the rear wheels. Likewise, larger brakes make an appearance, with 350mm front discs clamped by four-piston calipers assisted by 330mm discs and single-piston rears.

Adaptive suspension is standard, with a wider spread between the Comfort and Sport modes than in Mercedes’ other compact cars, the standard 20-inch wheels (21s optional) are a half-inch wider and wear 20mm wider tyres measuring 255/40 at both ends.

Activate the standard launch control and you’ll shoot to 100km/h in an impressive 5.2sec, but the engine is impressive even when not engaging in traffic-light drag races. With Sport mode engaged, most easily done so using the steering wheel-mounted drive mode selector, it feels perky, powerful and well-matched to the chassis. It sounds good, too, with a hint of Focus RS-style growl to its note. 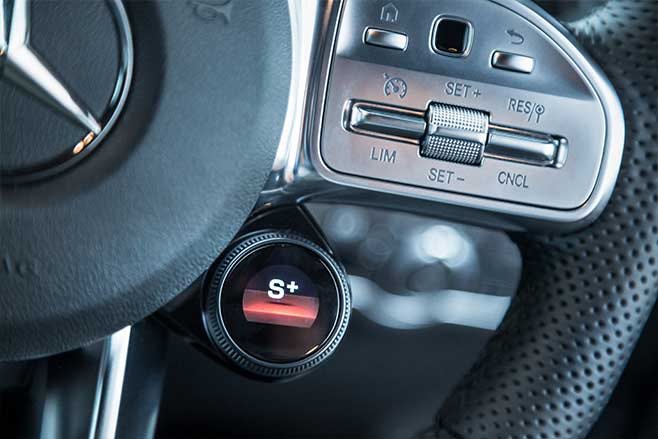 The GLB 35 handles as well as it could ever need to. It feels quite tall but can be hustled very quickly, though it’ll push into understeer in hard cornering and the AMG Dynamics system, which is a sort of umbrella electronic program, cuts in during very enthusiastic driving, even with the ESP and the drive modes set to their sportiest settings. 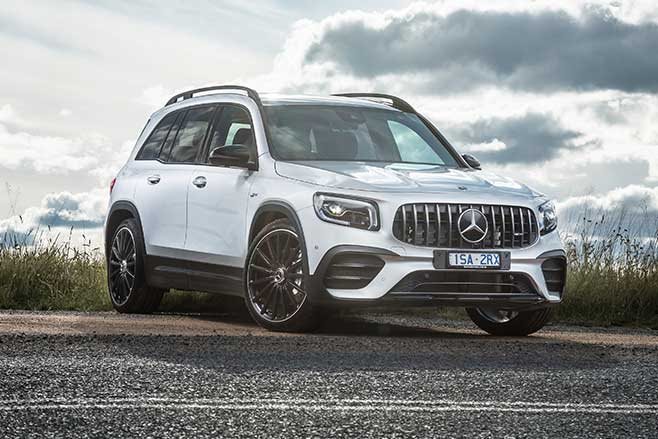 Regardless, it’s refreshing to see and drive an SUV that isn’t just a taller, less practical and more expensive version of the hatch on which it’s based, but instead offers something genuinely different and worthwhile. I suspect that like the B-class on which it’s based, the GLB won’t be for everyone, but those who buy it will love it.