: It’s as Aussie as a meat pie full of vegemite, but the Holden Commodore ute is set to disappear forever once local manufacturing ends in 2017. Here we test the SS-V Redline, which sits at the top of Holden’s performance ute tree.

It’s essentially the final incarnation of Holden’s evergreen performance utility vehicle, set to disappear when Holden ceases local manufacturing in late 2017. It fills a specific performance/load-carrying niche many Aussies have embraced for decades.

Ford offers a comparable Falcon ute body style, but not with V8 power. Ford’s performance variant is powered by a turbo-charged six-cylinder engine, which is hugely strong, but lacks the classic V8 sound, engagement and linear throttle response of the Holden. The Ford’s other issue is its comparatively basic rear suspension compared to the Holden, which can make it especially skittish and grip-shy on rough surfaces. The only other alternative for load-hauling is a separate-chassis 4x4 ute, all of which have ample off-road ability but are slow, cumbersome and not as polished on road.

Click here to read the full review on the Holden ute range. 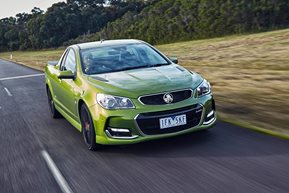