BFYB 2014: Why the bang favourite fell at the final hurdle

It might look cutesy. And the dash fascia in its plasticky interior might resemble a '90s portable stereo system.

Its ride is rigid and its mega-bolstered seats are a little tiresome for everyday use. But from the moment we chucked one into a corner at its Aussie launch last year, we knew the Ford’s Fiesta ST was something really special.

That wondrous chassis, and the harmony of steering, brakes and power deliver to extract its lofty dynamic talent, could give virtually any sports car at and price a hard shove.

And yet here was that goodness offered in German-engineered, -tuned and -built hatchback. For just $25,990. From that first punt we knew in the core of our bones that the Fiesta ST would be 2014 BFYB’s hottest contender for an outright win.

And then the Feista ST fronted up, earned stripes as the sharper and more driver focused device in MOTOR testing, and undercuts the Polo’s sticker by a huge margin. Game most certainly on.

And then Renault lobbed its Clio 200 R.S. into the fray and the game changed. As you can see, the Fiesta RS failed to lift the winning sub-$50K garland. So, what happened?

For buck factor, only the Mazda was cheaper and by a mere tenner. It main on-paper protagonists – Clio R.S., Kia GT, Pug 208 GTI, Mini – were around four grand pricier or more. And four grand at the fiscally pointy end of the proceedings is, at a kick-off, a massive buffer with which to leverage solid on track and on drag strip performance.

Thing is, the Fiesta’s numbers were merely solid rather than scintillating. It clocked a fairly tardy 7.4sec 0-100m time when the French cars were in the sixes.

And its 15.4sec 0-400m effort was not only three-tenths down on the Clio but firmly in the bottom half of the 12-strong field aiming get close to the STI’s stunning (13.64sec) benchmark.

Even with overboost on tap lifting its official 134kW/240Nm ratings to 147kW/290Nm, its rolling 80-120km/h acceleration of 4.6sec was dead heat with the much heavier Kia and short of the French hatches, let alone the really powerful stuff such as the SS Ute and STI.

Braking? For a device weighing under 1200kg and certainly on BFYB’s lightest competitors, the Fiesta really should’ve done better than 40.1m, the second worst result of the Cheapie Dozen.

Fine. But the racetrack is the venue where the Fiesta should’ve shone its brightest and leverage its most stunning virtues.

Shine it did, but right here the Fiesta copped a rub that perhaps hampered its chance of a class victory, See, the ST stopped the clock at 1:46.6sec, but four other cars also pulled a ‘six’.

The Pug’s lap time was identical, the three others – SS Ute, Mini and Clio – fractionally quicker by a measure of tenths. Another half-second quicker and the Fiesta might’ve leapt up the results sheets…but then again the same could be said for any one of the competitors in any test.

Fact is, for the vast majority of the testing, the Ford kept trailing two other French compact hatchbacks that fight in the pint-sized rocketship segment for the buyer’s dollar.

Then the judges weighed in with their opinions on driver-focus, fun quotient and X factor. And when numbers are removed from the equation, the only other car they preferred for seat of the pants thrills was Subaru’s STI (and mainly down to its otherworldly potency and pace).

A bridesmaid effort then. But it’ll be interesting to see how it goes in the overall standings. 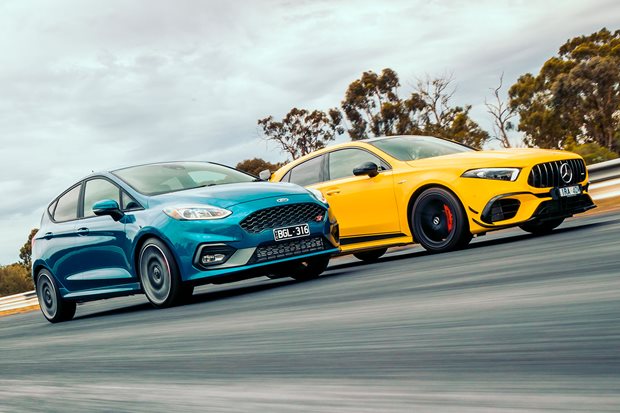 AMG-A45 S and Fiesta ST – it’s hyper hot in our May magazine!