If you ever needed proof that the motor industry is a fast-moving critter, just hold this year’s BFYB results up against last year’s. See the BMW M135i last year?

Top of the pops in its class. This year? Not so much. In fact, the little BMW has gone from rooster to feather-duster in the biggest way, slipping all the way back down the charts to ninth.

Is the M135i no longer any good? Has it been messed with and ruined? Nope, not at all. What’s happened is simple: the rest of the BFYB world has caught up with it. It hasn’t all been advancements from the opposition either; BMW’s own M2 re-writes the book on performance-per-dollar and the M135i has kind of been left out in the cold. What hasn’t changed is the BMW M135i’s level of ability. It makes us cringe to see it place so lowly because it’s still a great thing with a tonne of grip. That said, it didn’t enjoy the Winton layout as much as you might imagine. The BMW’s slow-corner speeds were there or thereabouts, but the faster sweeper saw the M135i lose a bit of its shine. Its lap times suffered as a direct result rather than any shortfall in snot.

See, the BMW is quick. From rest, it’ll clobber 100km/h in under five and it gets across the first 400m in a low-13, so there’s no problem there. Neither is it lacking flexibility, because it’s able to smash from 80-120km/h in less than three ticks. Nope, it just doesn’t seem to get around the bends as swiftly as it probably should have and that’s the story of its ninth place.

As for causes, well, the overall footprint isn’t huge and it was nothing stellar in the braking tests either. But, clearly, part of its lack of corner pace was down to the fact we couldn’t seem to get the ESP to completely disengage. Or if it was, then the same electronics that act as the limited-slip diff were messing things up. Either way, when you’re trying to float it through Winton’s sweeper and the electronics are cutting in and adding time to the lap, we’re inclined to say “Yep, there’s yer problem”.

In a wow-factor sense, the M135i was a bit disappointing. It’s very refined but, as Luffy put it in his own inimitable way, it can be “too refined”. Is that being a bit hard on it?

Maybe, but the fact remains that the little hatch was a bit distant and remote; eager to please, but not at all costs. I’ve got to take issue with the look of the thing, too. It’s a bit too Fisher Price for mine and I don’t think I was alone in that. So there you go, from hero to zero in 12 short months. BFYB can be a cruel mistress. JUDGES' COMMENTS
05. David Morley
“Wouldn’t matter how good it was, I can’t cop the look of it.”

04. Dylan Campbell
“I like this car a lot. Grunt and rear-drive – my kind of hot hatch.”

05. Scott Newman
“Ninth a harsh result for what remains a brilliant hot hatch.” 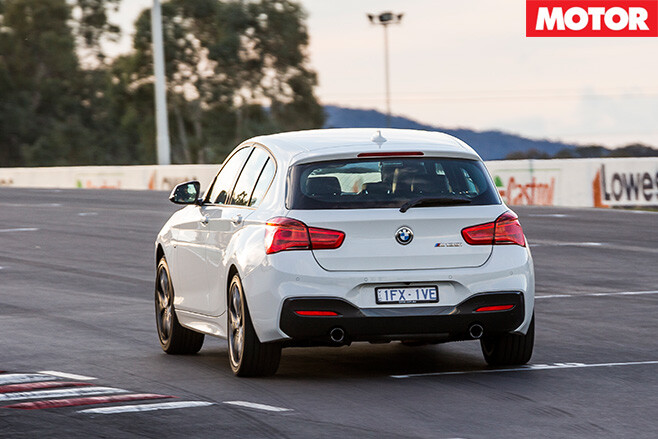 WARREN LUFF SAYS
06. “This thing is so glued and controlled it takes away some of the fun”

“You can feel there’s a great chassis there, but the engine probably doesn’t live up to what its probably capable of.

“I think lap times could have been faster [if the stability turned off completely] but it’s everything you expect from BMW – it has good brakes, it’s got a good engine in terms of torque and driveability, top-end power. If anything it’s probably just a little bit too refined,
“But in terms of giving you the confidence to go faster, it’s got huge amounts of grip – it’s just a matter of finding where that grip is.”