The DS3’s shark fin-shaped B-pillar is one of its most striking design elements, though there was nothing predatory about the baby Citroen’s performance on the track.

Slowest to lap Winton of all in the $0-50K group, it was also chewed up and spat out by two judges who ranked it last, and just scraped into top 10s with others.

If that’s not living up to the credibility gained by the DS3 badge through its rallying heroics with pilote genie Sebastian Loeb, it’s also not because the handling is more WC than WRC.

The DS3 DSport continues to transcend the humble-handling C3 donor car to offer a decently agile chassis underneath. A 25kg weight reduction as part of a 2015 update – 7kg of which is attributed to a redesign of the torsion-beam rear suspension – helps this 1140kg three-door feel even lighter on its feet.

The DS3 initially understeers when nudging the boundaries of adhesion, but it’s adjustable to both steering and throttle. That steering is also enjoyably precise and direct. 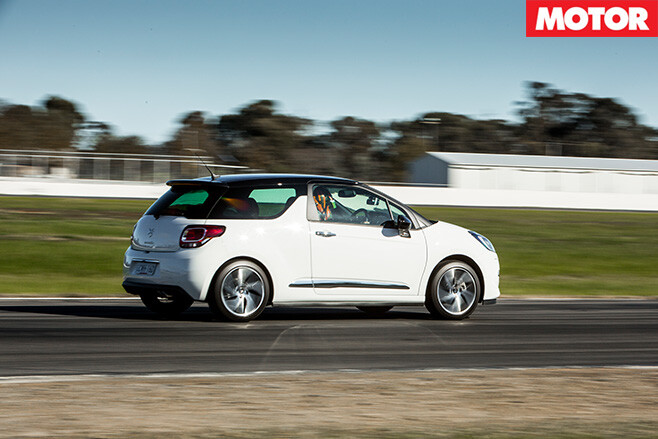 So the two biggest culprits responsible for making the DS3 feel more like a warm hatch than hot hatch are controls such as the clutch pedal and six-speed manual shifter that lack heft to betray its greater luxury remit, and an engine that feels relatively punchy on the road but is no knockout on the track.

The new 1.6-litre four-cylinder – still part of the successful small-capacity turbo family shared with sister brand Peugeot and BMW – gains a revised turbocharger and a direct injection system that squirts fuel into the combustion chamber with increased pressure.

Power lifts 6kW to 121kW and maximum torque, while unchanged at 240Nm, kicks in 200rpm earlier at 1400rpm and plateaus to the same 4000rpm. Neither dramatically changes the DS3’s fortunes here, though.

The engine is still most effective at higher revs, though it seems to take an age to get there. And the lack of serious pace isn’t just a sensation but also a reality – as the leisurely standing-start and rolling acceleration figures attest: 0-100km/h in 7.51sec and 80-120km/h in 5.19. The buck part of the equation doesn’t help matters. While equipment worth more than five grand aims to sweeten the deal that has seen the DS3 increase by a significant $4250 to $33,990, it expands the list of much-cheaper-yet-much-faster rivals.

The DS3’s raison d’être is clearly to help establish Citroen’s posher sub-brand, though here in the $0-50K segment a case of not enough bang and too much buck means it takes the spoon made of wood rather than silver.

Morley 10th – “What place does a perfume dispenser have in a hot-hatch?”

Newman 13th – “Style over substance. Not awful but track not its natural habitat.”

Spinks 9th – “One for the Le Road rather than Le Track.”

Luffy 10th – “It's quite soft in everything it does, and it’s not massively responsive. You can’t throw it around and have a lot of fun. Like the Falcons, you feel like you're sitting on the car and not in it and there's not much lateral support in the seat. You have to brace yourself on the steering wheel and the pedals to hold yourself upright. It's not the most inspiring of the bunch.”