Speculation persists that some time down the track the XR6 Turbo will do the equivalent of the XR8 and grab the more powerful engine from its now-defunct FPV offshoot.

In this case, it’s the F6 Typhoon rather than GT. But that’s (potentially) another day, another Buck. Ford’s turbocharged six-cylinder Falcon has been a V8 hunter since it came on-boost in 2002, though of course that also included shooting its own eight-cylinder sibling in the foot.

The tables are now turned – quite literally when it comes to performance figures. The XR8 elbow-dropped the Turbo by half a second in the 0-100 sprint, clotheslined it over 400m by eight-tenths, gave it an in-gear forearm smash from 80-120km/h by seven-tenths before jumping off the ropes to deliver the ultimate, submission-inducing smackdown with a lap 2.7 seconds faster.

Only when it came to pummeling the brake pedal did the XR6T edge its in-house rival in a notable exercise. Even then, its one-metre advantage had more to do with the XR8’s extra mass. More telling is that the exhaust-recirculating XR6 pulled up barely any quicker than the XR6 inhaling merely through its nostrils. 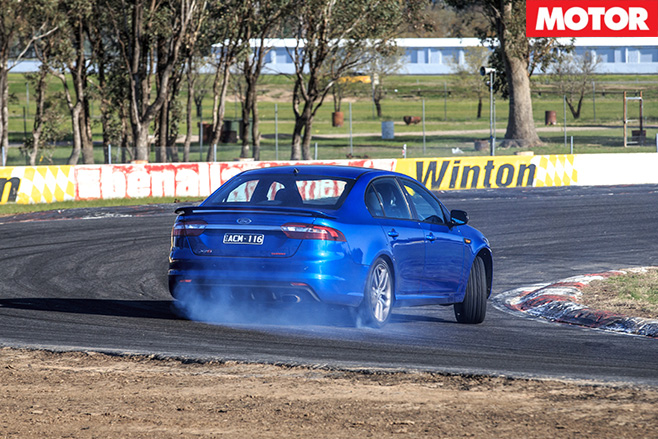 On the track, the brakes don’t inspire confidence. Considering the speed the XR6 Turbo has little trouble generating as you bound towards a corner, they don’t have either the requisite feel or progressiveness for this 1.8-tonne missile.

Dynamically overall, the XR6T also feels more country-touring sedan than Touring Car Championship racer. The handling is quite rolly and the force-fed Falcon proved through Winton’s Turn 1 chicane that it’s not particularly adept at transferring weight.

It was enough for this blow-in to controversially relegate the blown Falcon below the standard XR6 in the judges’ rankings, though before you shout “Poms should stick to hatchbacks” there was also dep-ed Scotty preferring the latter’s trade-off of speed for greater finesse.

It’s also interesting to note the boggo XR6 carried higher apex speeds through turns 5 and 9. Powering out of corners, however, reveals there’s good traction when you’re looking for a clean stopwatch lap … or achievable oversteer if you want to have some fun sending more of the engine’s 533Nm to the rear wheels. 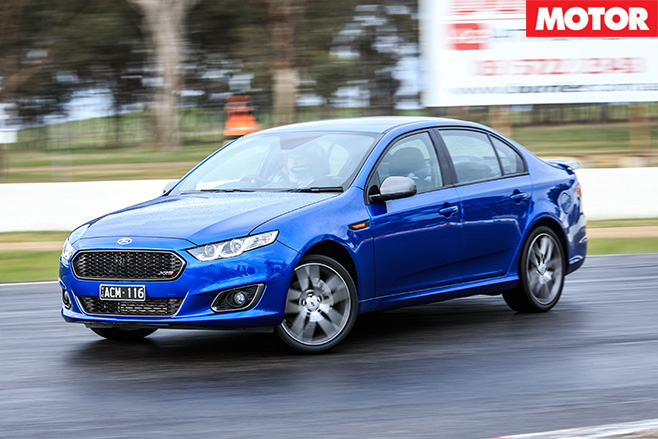 And we do still very much like this 4.0-litre turbo donk. While there’s no denying some initial lag, the turbo spools up quickly enough to become more linear – and deliver strong, flexible performance.

With the 0-100km/h, 0-400m, 80-120km/h and lap v-max among its scalps in the $0-50K bracket – plus a fourth-quickest lap – a second-highest Bang Index countered a second-lowest Price Index to position the Turbo in a credible 6th against its heavily hatch-biased opposition.

Difficult to imagine a rebranded Typhoon not faring even better, but over to Ford Australia…

Campbell 7th – “It’s not really interested in behaving. But it’ll happily show off its real talent for tyre vaporisation.”

Newman 8th – “Not sure the turbo adds much apart from the ability to destroy tyres.”

Spinks 13th – “Doesn’t need any more grunt but does need more in the brakes department.”

Luffy 7th – “Went into limp mode with three corners to go, which I think is related to the oil temperature. But, it's a fantastic engine with so much low-down torque and it's really driveable. Like the XR6, however, it lacks feel at the front end through turns. Ergonomically, you feel like you're sitting on the car and that you're not actually a part of it. And the brakes definitely aren't up to the job.”