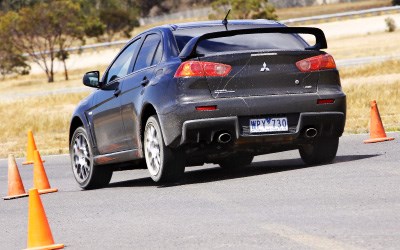 Fabulous tech and undoubted bang for buck, but too hardcore for COTY greatness.

The last time a Mitsubishi Evo fronted up for COTY duty (Evo IX in 2006), it was bundled out at the first hurdle.

Its raw dynamic magic seduced all our judges, but the poverty-pack interior, jackhammer ride and general lack of refinement killed the love. This time around, Mitsubishi has made much of the new Evo's liveability, claiming it now offers "performance without compromise". Cue the COTY crucible...

The Evo started positively enough. During the static evaluation there was much head-nodding among judges at the depth of technology it offered. The sedan's rear spoiler, roof, bonnet and front guards are made from aluminium, as is the all-new 2.0-litre turbo four. Breathing with variable valve timing on both exhaust and inlet cams, outputs peak at 217kW/366Nm, and it can be coupled with the new twin-clutch transmission (TC-SST) or a five-speed manual. Then there's the three-mode all-wheel-drive system, offering Tarmac, Gravel and Snow settings that govern traction via a front LSD, a torque-splitting active centre diff and an advanced yaw-sensing rear differential.

Judges approved of the extensive standard safety equipment list, which runs to ESP and seven airbags, along with auto headlights and rain-sensing wipers. There was a sense that the wild-child Evo may finally have grown up.

Aside from these technical improvements, there was agreement that Mitsu has significantly lifted the bar in terms of interior quality. Newton even thought it "quite luxurious, for an Evo." Others weren't convinced, however, grumbling about the lack of steering wheel reach adjustment, plastics quality and the fact that there simply isn't enough differentiation from the base $20,990 ES Lancer, particularly in the range-topping MR.

Which brings us to Value. At $59,990, the entry Evo represents whopping bang for your buck, but tick the MR box at $72,190 and the included suspension upgrade served to ruin ride quality without noticeably aiding dynamics. Accordingly, most didn't score value beyond the median.

Nevertheless, as judges cycled through the You Yangs dynamics tests, praise for the Mitsu's pace and honed dynamics came thick and fast. Sharp steering and almost telepathic turn-in, gobs of grip and a deliciously adjustable chassis meant no other car - C63 AMG included - could match the Evo's cornering speeds.

Plant the snout tight to the inside line, feed in power and the centre diff shuffles grunt to the back axle, the rear end squatting in the quest for traction. Press harder on the throttle and the yaw-sensing rear diff juggles torque to the outside wheel and the Evo slingshots out of apexes.

While some found the five-speed knuckly and slow, every tester gushed about the twin-clutch SST 'box. In manual mode, response to inputs is immediate, but the 'box also offers three auto modes: Normal, Sport and Super Sport. In Sport and SS, the Evo does an accurate job of picking the right gear, blipping the throttle expertly on downshifts.

On gravel, not surprisingly, the Evo excelled; engaging the 'Gravel' mode produces a more rear-biased power delivery and languid four-wheel drifts. "Great on dirt" was Hawley's summation. More disappointing was the Evo's wet/dirt ABS calibration. In both disciplines it sailed worryingly past the last cone.

In the final wash-up, and despite an undoubted extra layer of civility, the tenth-gen Evo stumbled in the same areas as its predecessor: it's still too focused and uncompromising to score highly against the majority of the criteria. Ride quality is improved, but still harsh on pocked tarmac and NVH levels are intrusive. Plus, the Evo's thirst for 98 RON skyrockets into the low 20s when pushed hard. Factor in the surprisingly poor braking performance and stage one was as far as the Evo flew. Again. 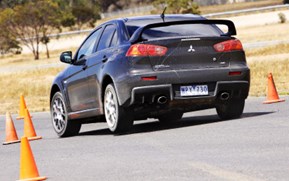 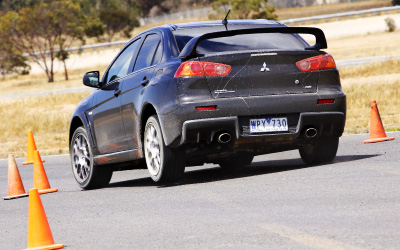 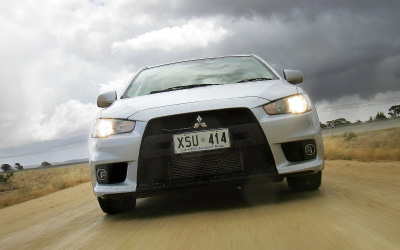