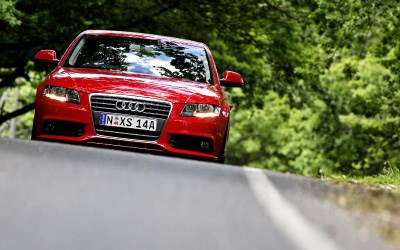 We've admired their interiors, we've drooled over their drivetrains, we've quibbled over quattros. But we've never had an Audi come anywhere near this close to claiming the Wheels COTY crown.

Audi's downfall over the years has always been, in one way or another, dynamics. The company's insistence on having longitudinal engines hanging forward of the front axle has always put Audi behind for point-in precision, cornering balance and ride quality.

That'd be fine, if Audi merely desired to better middle-luxury front-drivers from France, Sweden and Japan. But its German rivals aren't only rear-drive - they're reliably among the best rear-drivers around.

The platform underneath Audi's all-new A4 attempts to reverse the dynamic nose-dive by moving the front differential forward (displacing the clutch or torque converter), thus effectively moving the front axle forward by 154mm. It's visible in the new A4's more rakish exterior lines - although a quick look at any one of the rather confusing array of engines suggests that a lot of the weight remains on the wrong side of the wheels.

And in any case, expectations had already copped a punch in the nose a year earlier. The new A4's cut-and-paste platform made its debut in the A5 and S5 coupe, which left us dead cold not only with its poor rear-cabin packaging, but with the front-drive A5's soggy dynamics and light but argumentative steering, and the sporty S5 quattro's harsh ride. "A German Thunderbird" said Robbo at the time.

As a static display, the new A4 started racking up points immediately against the COTY criteria. Aero Cd figures run as low as 0.27 and the A4 claims (only just) the biggest boot in its class, at 480 litres. Kerb weights looked a promising story, beginning at 1410kg for the base model.

On average, though, the 1410-1690kg kerb weights are little advanced from the Mercedes C-Class, and well shy of the trim BMW 3 Series. The Audi is also longer overall (by around 120 and 180mm, respectively) than these rivals.

The engines, spanning petrol turbos of 1.8 and 2.0 litres, a 3.2-litre petrol V6 and turbo-diesels in 2.0 (four-cylinder), 2.7 and 3.0-litre V6 guise, all feature direct fuel injection and are acknowledged as front-runners in economy and efficiency. The four-cylinder TFSI is a four-time class winner of the "engine Oscars" - a fact well-known to Carey and Robinson, two of the judges for the international award.

Along with all the engines, there's a drivetrain for all tastes, too. Either the front wheels or all four are driven via your choice of six-speed manual, six-speed auto or eight-step CVT.

COTY judges were charmed by the interiors. "Typically beautiful interior; materials feel top-notch," offered Poppitt. However, more than one judge would gripe at the absence of left footrests. Some felt that the standard, firmly padded seats were too flat in shape; rear benches were handicapped by being a tad short under the thighs. Rear occupant space almost matched that of the Honda and Mazda sedans, with the Audi being around 30mm shorter in overall length.

For once, the plaudits didn't stop when the driving started. Audi has tweaked torque split on the quattro versions - which included our 2.0 TFSI manual, 3.2 FSI auto and 3.0 TDI auto - with more rearward bias to aid handling. But that didn't explain why everyone's favourite was the sweet-engined, charmingly chuckable 1.8 TFSI.

Robinson was wildly impressed. "The best A4 - best value, a terrific package," he wrote. "The basic FWD chassis is now so good, do you need quattro?"

Robinson's praise continued for the Dynamic Steering option, fitted to two of our fleet. Dynamic Steering, available on top of Audi Drive Select (which alters throttle, tranny and damping settings through Comfort, Auto and Dynamic modes) is an electric system; standard A4 steering is still hydraulic, with a clever vane-type pump.

But let's get this dynamic thing straight: Audi plus electric steering equals a positive outcome? Commented Robbo: "It's far less intrusive than the 5 Series. You could drive this for years and not be aware it was there."

Not so much love for the standard steering, though. Leanne Tander found the standard set-up's high-speed feel a little light and wandery at the straight-ahead; Carey called it "synthetic". Poppitt judged that the A4 chassis "can't match the 3 Series or C-Class for dynamics; steering is still an issue". Hawley, likewise: "Lacks the poise of the C-Class, but still a superb effort by Audi."

A theme that emerged fairly early was the confusion over the A4's model spread. Above the excellent 1.8 TFSI, for example, is a 2.0-litre TFSI; on paper, our quattro example added 37kW, 70Nm and $20,000, but on the road seemed to add very little. Among the diesels, likewise, there's a startlingly excellent 2.0 four, a 2.7 V6 and an admittedly muscular 3.0. Topping the lot, in theory, is the 3.2 petrol, but it's comprehensively trumped by the big diesel.

Where our 3.0 TDI quattro allowed suspension fiddling with its $5826 ADS/DS option, some serious ride issues surfaced in the 3.2-litre petrol car (similarly shod on 18s, but lacking the electronics). Bulmer proclaimed the engine "a gem" but Poppitt wasn't convinced the 1690kg flagship was the most sporting variant: "Lovely engine, but it's about as sporting as John Howard in his tracksuit." It was also thirstier than the six-cylinder Falcons.

A phrase that began to be heard from around day four was "the law of diminishing returns." From an absolutely cracking base model (albeit, one carrying more than $13K in options as supplied to us), the A4 range loses its charm as one moves farther up. Plus ça change: chassis refinement, primarily in ride issues and steering feel and responsiveness, became harder to overlook when prices climbed beyond $70K.

It can't have helped that the A4 was in the presence of some very capable and comparably-sized Japanese sedans that kicked off at $30K. Flint-hearted Carey dismissed it thus: "Transportation appliance, luxury grade. Made in Germany."

It's true that the Audi wasn't only being compared against itself and the COTY criteria. Inevitably, there was the spectre of the reigning COTY, a direct rival to the A4.

Good as the Audi is, particularly in areas like interior quality, overall efficiency and safety scores, the Mercedes-Benz C-Class still has its measure in packaging and trumps it for poise.

The Audi is certainly a worthy rival to the C-Class. But not quite worthy enough to succeed it as COTY. 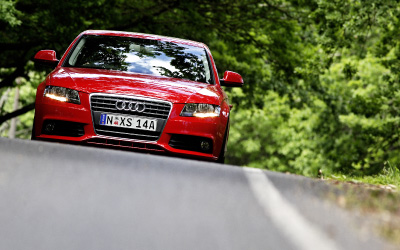 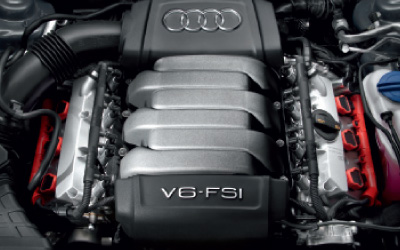 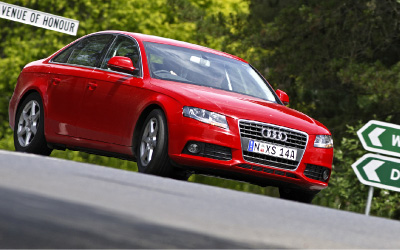 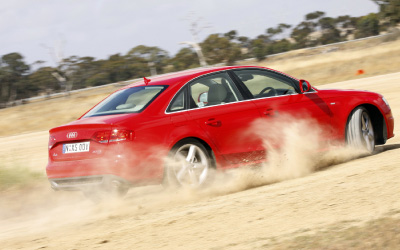