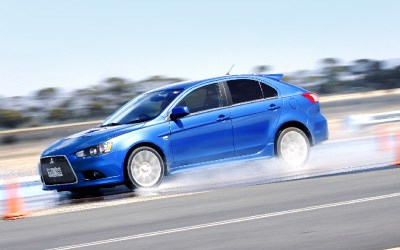 'Evo lite' not without virtue, but lacks the depth to run with COTY heavyweights.

Remember the good old days when you went to the footy and got to watch a reserves match before the main game?

It made for an interesting comparison. The fundamental purpose was the same, but everything happened a bit slower, less surely and without the same poise or ability.

That's kind of how the Ralliart stacks up against the rally-rocket Evo model from which much of it is derived.

Okay, in Wheels COTY the entrants are pitted against the criteria and not each other. But considering most judges drove the Ralliart immediately after the Evo at You Yangs, the gap in class between the two Lancers was obvious.

The Ralliart is not a bad car. Indeed, quite the reverse is true. For just beyond $40,000 you get the determined and punchy, turbocharged and intercooled new 4B11 2.0-litre engine, driver-adjustable AWD and Mitsubishi's brilliant dual-clutch TC-SST transmission.

But while the Evo sits happily among the elite, the Ralliart impresses without reaching the same heights.

It's not helped by typical Mitsubishi penny-pinching. You get a disappointingly brittle and bland interior, a tinny body, no reach adjustment on the steering wheel, too much road noise and - most heinously for a car with real sports potential - sub-standard rubber.

The Ralliart comes shod with the same 18-inch wheels and 215/45 tyres as the naturally aspirated VRX, and it didn't take the tortuous You Yangs bitumen long to show what a short-sighted decision this is.
"It needs better rubber," wrote Poppitt. "All the chassis fundamentals are there, but the tyres wash into understeer. Steering is also disappointing - too many turns and lifeless."

It wasn't hard to sense the Ralliart had more dynamic potential than its tyres were allowing it to show. The ride and handling balance was better than either of the front-wheel-drive Lancers that bombed in COTY last year, and better than the harder and more focused Evo. It gave rise to hope that the GS architecture underpinning the Lancer might have some talent after all.

More subjectively, the looks of the Ralliart in Sportback (hatch) guise drew some negative commentary, all of it centring around the weirdly heavy rear-end: "It looks like it's pooped in its pants," said Carey.

The hatchback also hurt the Ralliart's marks when it came to Function, as the load lip is high and the actual luggage space far less than the sedan. Rear-seat space was fine, but the small rear doors didn't help exit and entry.

By contrast, the front end styling of the Ralliart remains strong and aggressive, dominated by an enlarged matte-black grille and vented aluminium bonnet donated by the Evo.

Indeed, the Evo's various filtered and filleted contributions ensure the Ralliart ranks highly in terms of Technology. The engine downgrades to a single-scroll turbo and cedes 40kW/23Nm, but remains a vibey, noisy treat. Its continued punch and the SST's ingenious flexibility serves up 0-100km/h in 6.3sec, an ADR fuel figure of 10.2L/100km and CO2 emissions under 250g/km.

In the real world, however, its thirst for 98 RON is prodigious when pushed, but worth living with: "It's a great drivetrain - revvy, powerful," declared Hawley.

The Ralliart also fares well when it comes to Safety. Seven airbags include a driver's knee 'bag, and there's also EBD, brake assist and an ESP system that seemed well-tuned. A space-saver spare is a disappointment, but the $42,490 price remains tempting.

But not tempting enough to garner the judges' support and win through to the COTY final. Like many also-rans, the Ralliart is dedicated and hard working; it just lacks the inspiration and class to go all the way. 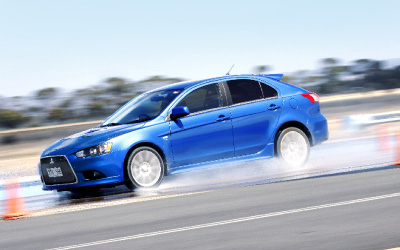 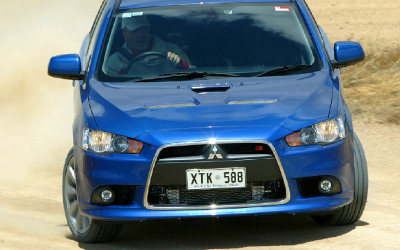