BMW’s F82 M4 had been released to the public for what seemed like four minutes before the first modified examples were popping up on the internet.

It’s no surprise that the first forced-induction M-car carries a mind-boggling amount of hype, expectation and hope on its broad, be-flared arches.

The worldwide popularity among tuners for the new-generation of turbocharged BMW models, including 135i, 1M and 335i (among others), has changed the way the Bavarian marque is viewed, particularly among a younger demographic. The glory days of Group A tourers and highly strung N/A six-pot M5s have been replaced by easy power, cheap gains and plug-in computer upgrades.

This style of modifying was the domain of Japanese and American tuners for many years, but the Europeans have learned quickly. While there are plenty of guys going nuts on M4s, there are more companies like Sydney’s City Performance Centre taking a more progressive approach and weaning performance out of several areas rather than just winding bulk kilowatts out. “These cars are brutally fast standard but we just gave this one a wake up,” CPC’s Alessio Iera explains. “It’s designed so it can be driven to the office during the week, but also do track days on weekends or what-not. This one is really nice to drive in traffic. Just leave it in traffic on comfort and it is plush.

“We put the Akrapovic exhaust on it, including the down pipes with catalytic converters. Getting that sorted out with the right-hand drive was really good to have done. We also modified the intake on this, and we’re working on developing a new intake and airbox but it’s not quite ready yet.

“This car also has a flash-tuned trans to improve the shifts, along with the adjustable perch springs from KW and the HRE wheels. We did the HREs in a custom colour for the customer, and we’re now starting to shift sets of these HREs as word gets out we are a distributor. “The wheels on the M4 are from the entry level FlowForm range, but some people won’t recognise them because they don’t know you can get them in custom colours. So there’s the silver and black, but we did the bronze because they look wicked. They even use the OEM tyre!”

Alessio admits the CPC crew took a new turn with this particular M4, trying flash-tuning for the first time. Flash-tuning is where a computer is used to make live updates to an ECU, rather than a pre-programmed box or downloaded tune. 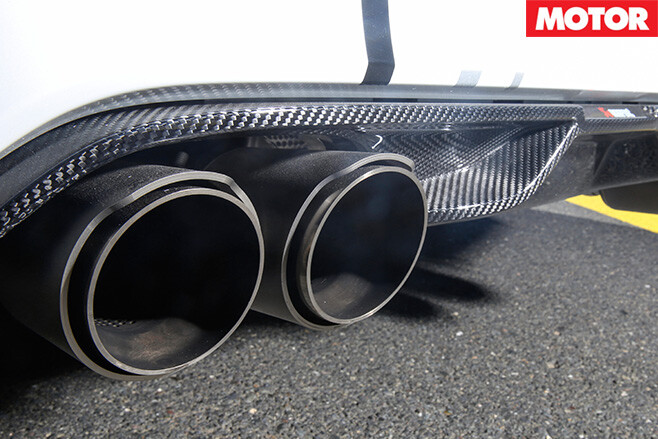 “This is the first flash-tuned M4 we’ve done; it isn’t a common thing we do as we normally run Tune Boxes. At the moment the interest in M4s is huge. We did the flash-tune on this car for the customer and to see where we can develop it. This is Stage One and we’ll keep progressing it to see where it will end up.

“This car retains all the factory suspension function, including Dynamic Comfort, so it’s still a good road car. We’re looking for mods that a guy can drive in looking for a good package that is a solid mix of track performance while still keeping it a useable road car.”

The M4 was a seriously fancied contender for outright honours at Hot Tuner, and it didn’t disappoint. It struggled with grip during straight-line testing and its immense speed was cruelled by the South Circuit’s tight layout, yet it still came third outright against far more nimble, harder-tuned opponents.

A 37.15m result in the 100-0km/h braking test was its worst performance, while the 4.8 second 0-100km/h acceleration run was plagued by chronic wheelspin on a very green Western Sydney Dragstrip surface. Luffy was often deep into third before the big coupe hooked up and gripped! The big six’s lap time said more about how tight the Sydney Motorsport Park South Circuit is, with a 62.40 second lap good enough for third. The lightly fettled M4 showed its true potential in the 0-400m and dyno disciplines, wheelspinning its way to a 12.44 ET and punching 321kW at the treads with ease. These results were good enough for second and third outright, respectively.

On the circuit you could feel the M4’s considerable size. While the steering and transmission were typical high-quality BMW, albeit with the flash-tune on the shifting software, the huge top-end rush of the turbocharged motor felt like too much in the concrete confines of the South Circuit. Without Luff-level skills behind the wheel, I didn’t have confidence to really stand on the throttle and wind it out.

That said, under brakes and through the corners, the M4 was a revelation at how you could drive quite lazily and it would still power around the track like it was hoovering up miles on a freeway.

A huge amount of work goes into the black magic of tuning a car’s ECU, and for the CPC M4 to feel like a BMW-built product is a credit to the guys.

I drove the car in every mode, and even in Comfort the M4 was rewarding, fast and entertaining. It’s all too easy to get caught up tuning cars to be as hardcore as possible, but the real art to building a better street car comes in how it responds to part-throttle loads, rough roads and all the crappy stuff we have to deal with away from perfect racetracks.

It also sounds like complete aural pornography, too. The Akrapovic exhaust might cost a shade under $9500, but it gave everyone who heard it tingles up their spines. After all, a good exhaust note is an intrinsic part of the appeal of modified cars. Still, we couldn’t get away from the fact the CPC M4 was a big, powerful, fast car on a tight race track and Luffy agreed. “It really feels like a caged lion out there,” he said.

The massive amount of mid-range grunt, that makes the car so devastatingly fast on the road, also hindered it at SMSP’s South Circuit as it would start really moving just in time for yet another tight turn.

With its fantastic grand-touring potential and ability to demolish in-gear acceleration runs, it’s probably the perfect contemporary coupe to take from Melbourne to Brisbane via the outback, yet its pin-sharp steering and fantastic poise means it would also be incredible fun on the Oxley Highway.

Couple in the fact the M4’s build quality and interior spec level are A-grade – and the CPC mods make it a real visual stunner – this BMW is a jack-of-all-trades, and master of plenty. “It feels like a bit of a caged lion because it’s got so much potential and the tight confines of the circuit don’t really allow you to explore the true potential of the car. But it’s such a fun car to drive on the limit. It’s so responsive to everything you do. The work that’s been done helps to sharpen it and make it more responsive. And the engine in these things is just so good. Take it onto the full circuit here and this thing would really show some people up.”