As sensationally wonderful as the Toyota 86 is, it’s not over-endowed in the grunt department.

Its outright speed isn’t too shameful – 0-100km/h in seven-odd seconds and about 15-flat over the quarter was V8 Falcon pace not that long ago – but its engine never really inspires.

Forced induction is the obvious solution, but apart from some tantalising motor show concepts, neither Toybaru manufacturer has offered a boosted factory variant as yet. “Not enough room”, “too hard”, they protest. The aftermarket is not so easily defeated, and Australia has been at the forefront of force-fed 86 development.

Regular MOTOR readers will be familiar with the ROH Wheels 86, as it’s appeared in these pages before. Unfortunately, the last time we drove it, during World Time Attack at Sydney Motorsport Park, things went awry when the engine let go, resulting in a costly rebuild for car owner, ROH Wheels’ Product Designer Glynn Helgeson. Same car, same venue, same driver, but the chances of lightning striking twice are next to nil thanks to a change in philosophy. Gone is the powerful but complicated twin-charge set-up, replaced by a single EFR Borg Warner turbocharger.

The engine itself has also been cracked open, an HKS stroker kit increasing capacity to 2091cc and improving reliability courtesy of new rods, pistons and crank.

“We actually put it back together as a twin-charge set-up,” says John Healey of V-Sport, the crew responsible for the latest incarnation of ROH’s Toyota terrier. “[We] did some testing, but the biggest thing was just the intake temps – we just couldn’t get the intake temps down enough to keep it reliable. 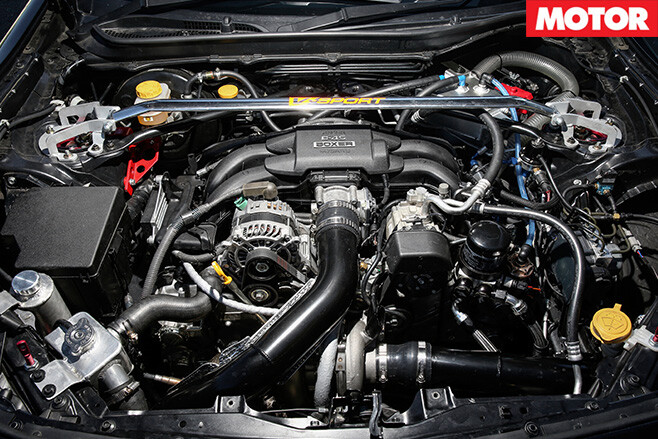 “The heat soak in it was crazy, seeing intake temps around 85-90 degrees; it just wasn’t going to work. With this set-up we’re running three pound less [boost] and making more kilowatts.” And it’s going to want to make some serious kilowattage, as the engine mods alone total more than $20,000!

The rest of the package is largely familiar, with RS*R coil-overs front and rear and a full complement of Whiteline gear (anti-roll bars, strut tower brace, Nolathane bushes, etc) handling the cornering forces, and ventilated and slotted DBA rotors (355mm two-piece discs up front; 330mm items at the rear) with four-piston calipers at each end pulling everything up nicely.

What is new is the rolling stock, one-off forged 18 x 9.5-inch alloys designed by Helgeson. The extra width has allowed 265/35R18 Yokohama Advan Neova AD08s to be fitted all ’round, though even with the guards flared it’s a tight fit: “the actual gap in the rear wheel arches is 275mm,” Healey says. This 86 is one of the most heavily modded vehicles in the event, with mods totalling $50,458 – that’s almost twice the car’s original RRP! However, it’s the bargain $29,990 original sticker that keeps the car’s total price to a reasonable $80,448, which could prove to be good value if it can deliver on its promised performance.

It’s with a strong sense of trepidation that I approach the ROH Wheels Toyota 86, helmet in hand. Y’see, during our previous acquaintance at Sydney Motorsport Park the car proved mind-scramblingly fast, yet also one of the most challenging cars I’ve ever driven, seemingly capable of power oversteering in every gear. And John Healey of V-Sport says it has even more power now. Help!

In fact, on the Mainline Dyno it growled, hissed and popped its way to an impressive 286.6kW at the wheels – almost 300 per cent more than stock – straining against the tie downs as it came on boost. 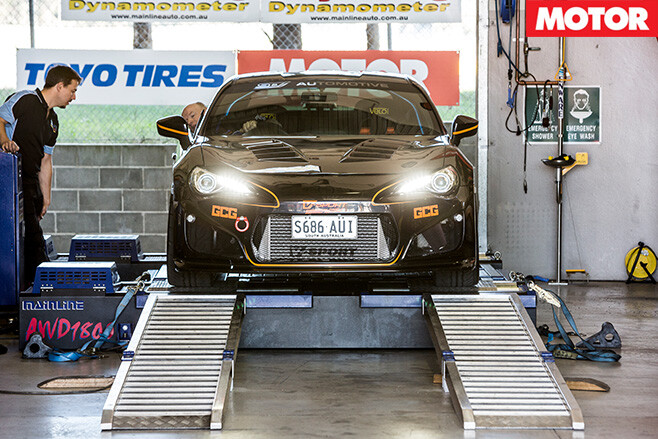 With the Sydney Dragway surface having been swept clean during recent heavy rains, this mammoth power meant grip was at a premium and constant wheelspin in the first three gears limited Luffy’s best efforts to 0-100km/h in 6.39sec and a 13.64sec quarter mile.

Those numbers are significantly quicker than you’ll achieve in a stock 86, but far from a true reflection of the car’s performance. For a more accurate picture, check out its terminal speed – at 181.12km/h, the ROH Wheels car is more than 30km/h faster at the end of 400 metres than the stocker. It’s fair to say that on a sticky track, mid-12s would be there for the taking.

Back on track, sitting snug in the Velo driver’s bucket seat, the surroundings are familiar, but the swell of turbo torque that arrives as we leave pit lane is not. By 3000rpm it’s already propelling you rapidly down the track, and it’s accompanied by a soundtrack that’s both harder and deeper than the stock car, overlaid by all sorts of whistles from the turbo.

The ROH 86 wears fairly aggressive rubber by road-car standards, and the initial laps are spent building tyre temperature, the rears fizzing in second as the boost arrives. At this relaxed speed, it feels very much like a regular 86. There’s much less roll courtesy of the stiffer suspension, but the brakes have a reassuring firmness and the steering’s weighting and rate of response are easily identifiable from the stock car. 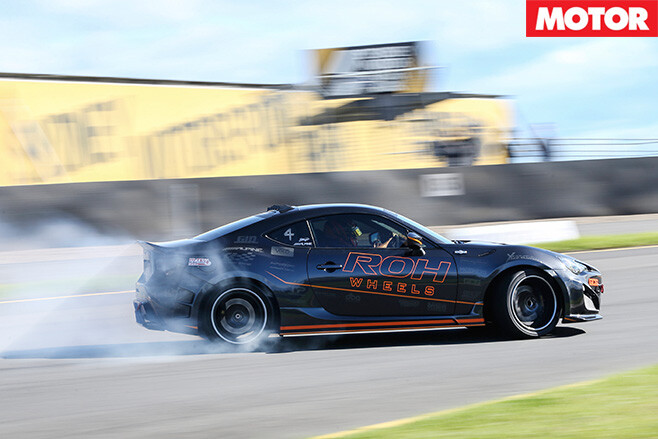 It’s when throttle meets carpet for the first time in third gear that the game changes – holy mother of God this car is fast! When on full song, the turbo sounds like it’s inhaling the road in front of it, the power of forced induction picking the car up and flicking it towards the next corner at such a rate that it’s a good thing those monster DBA rotors have been installed.

Before, the brakes felt to have far more performance than the tyres, but with wider rubber on the front (now 265mm) you can use more of the impressive stopping power (pulling up from 100km/h takes just 35.60m).

Initially the power is intimidating, but as confidence builds you realise that the inherent 86 balance is still present, only at massively higher speeds. However, with over 450 horsepower on tap, breaking traction in the slower corners is only a flex of the right ankle away. Heavily turbocharged cars can often be a right handful to slide smoothly, but the ROH’s smooth powerband makes it a hell of a lot of fun.

In fact, Luffy was full of praise for the engine’s response. And, combined with its impressive cornering capabilities, the ROH car clocked the fastest lap time of the event, a scorching 61.4sec lap pipping the Tunehouse 86 by a mere tenth. 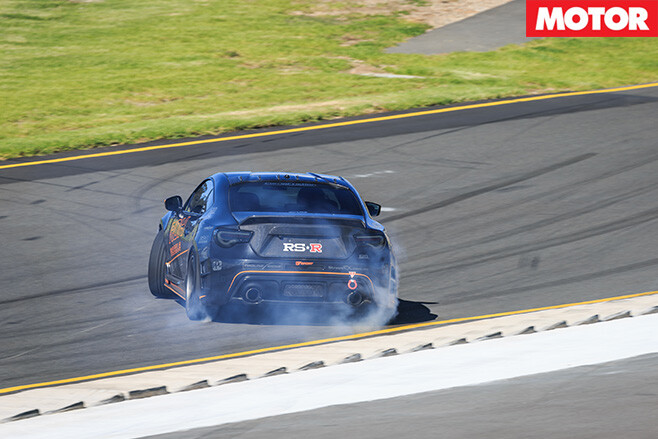 To put that in perspective, last year the Tekno Performance Aventador was less than a second quicker, at more than 10 times the price! In fact, Luffy even stayed out for an extra lap because he was enjoying himself so much.

It may no longer have the headline-grabbing twin-charge system, but the ROH Wheels 86 is a far more enjoyable and resolved car in its current iteration. It’s reasonably well-mannered, looks superb and while 50 large is a hell of a lot to spend on a $30K car, it would simply destroy any standard production car of a similar value. And that’s nothing to be scared of.

“This thing is so much fun out there. We know the 86 is a great platform to start with, but with everything that’s been done to this car, it just takes it to that next level. You can take it and use it as an everyday track car, but still have a fantastic road car. The engine’s really driveable and the suspension and brakes really work together. There’s not one part of the car that’s been left untouched and everything has been done really well.”