Rob Herrod is not, whichever way you cut the deck, a quiche eater.

Want to see more from Hot Tuner 2015? Check out all the action here.

He builds big, fast cars and he got to where he is by calling spades spades and giving people what they want.

He is not the sort of bloke you figure would be messing around with piddly little four-cylinder hatchbacks. But then, I don’t actually place the Fiesta ST in that category in the first place. See, the Fiesta ST is a firm favourite around the MOTOR bunker and that’s because it is a proper hot-hatch, not some mildly spiced-up grocery-getter with a stripe kit. It should, in fact, have been called a Fiesta RS, it’s that good.

But the ramifications of losing our big, locally-made cars is not lost on Herrod. He’s also aware that cars like the Fiesta ST might well make up a big chunk of the future of high-performance road cars. So he got himself one, had a fiddle, and this is the result.
“I hadn’t driven a four-cylinder hatchback for, oh, years. How long ago was the Nissan EXA? But they’re bloody good fun. And I reckon this one has turned out a ripper. “It’s not a thing I’d be buying to use every day, but I can understand why some people would. Are they the future? Maybe, yeah, I think they are. In the city it’d be awesome. And they make a great little track car.”

Herrod started with a pack from England from a mob named Mountune. It’s called an MR230 kit and claims to boost grunt to 230 horsepower (call it 170kW), but it does so while retaining the stock turbocharger and other hardware, making it pretty cost effective. Which, of course, makes sense in a budget-friendly jigger like the Fiesta ST.

The Mountune kit includes a new silicon charge-pipe, induction hoses and a bigger intercooler. There’s a new exhaust including the cat, and Herrod has adapted a Ford Motorsport cat-back system to finish it off and give it an awesome note. Mountune also provided the ECU tune which makes the most of the standard snail without requiring more than about three extra psi over stock.

Mountune also supplied the lowered, stiffer springs as well as a quick-shifter which is the only visual difference inside the cabin. But Herrod wasn’t done yet – he also added a set of 17 x 7.0-inch Ox Wheels alloys and ContiSportContacts measuring 205/40.

What’s possibly most amazing about all this is that the package is anything but a wallet-buster. Supplied and fitted at Herrod’s Melbourne workshop, the engine and suspension package tops out at a moderate $4980. And how does less than $1450 for the whole wheel and tyre package sound? True, we’re not talking 21-inch alloys and matching boots, but in the context of the Fiesta ST, those 17 x 7s and quality Continental hoops are just as much of an upgrade as pretty much anything you can legally bolt to a Falcon or Commodore.

The stiffer Mountune springs are probably the first thing you notice on the Fiesta ST, even on a smooth surface like a race track. Then again, suspension compliance is not a Fiesta ST long-suit even in standard trim, so it’s not like the end result has gone backwards.

There’s also a whole lot more body control on the change of direction; something that the ST is otherwise pretty good at to begin with. It looks tougher being tied down a little, too. In any case, what you notice about the car is not the ride it provides, but the pointiness that’s been dialled into the ST’s front end. What was already a pretty nosy little bugger is now a dead-set apex-sniffer, and the trick is not to overdrive the thing with too much input from the helm. Side-step? Check.

Then there’s the grunt. Oh yes. To be perfectly honest, the Herrod ST does feel perkier than the stocker, but it doesn’t seem like a wholesale power hike. That, says Herrod, is because the calibration only allows for an extra three psi over the standard car’s 17psi, meaning that the improvement is mostly downstream of that, in the exhaust where the lower restriction system simply flows better, allowing for a more efficient air pump. 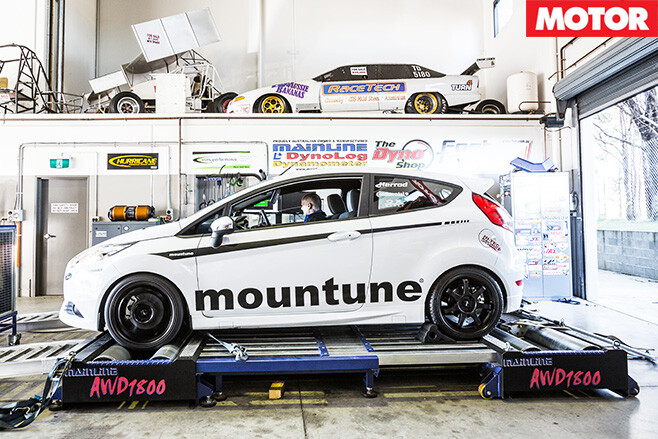 So, on the dyno, the little Ford managed 121kW where you’d expect about 100kW from a standard ST. But it’s the torque curve that will make you smile and there’s a huge spread of grunt from about 1800rpm to redline.

That was good enough to get the ST to 100km/h in 6.8 seconds and across the quarter in 14.7. The big issue, as always with front-drivers with plenty of squirt, is that the front tyres want to go up in smoke when you try to launch. Even so, with Luffy at the controls, the ST was still quicker with the ESC switched off, suggesting that Luff is a freak and that the Ford hooks up reasonably well.

But, again, it’s the in-gear squirt and roll-on thrust that makes the Fiesta such a blast to hammer around a track. Okay, so its 68.1 second lap was slowest of the bunch, but it feels fast and it should be a lot kinder to its tyres and brakes than some of the heavier gear here, too. Luffy backs up that assessment after a few laps, saying that the little Ford’s corner speed is probably its trump card.

Okay, so more grunt would make it even faster, but would it make it any more fun? Well, there’s already a fair dose of torque-steer when you get on the noise, and I don’t see that improving with even more urge trying to tear the front wheels off. If you were to spend more money (which kind of defeats the purpose, I know) it’d probably be on a set of demon brake pads. As it is, the ST took almost 39 metres to haul up from 100km/h, despite it being about a tonne lighter than some of the other stuff at Hot Tuner.

And one thing that doesn’t sound important, but you wouldn’t do without, is that short-shift kit. It makes gear selection not just faster, not just more accurate, but heaps more fun, convincing you of the need to shift just for the hell of it. And I reckon that quick-shifter is a metaphor for the whole Herrod Fiesta deal: it doesn’t cost much, doesn’t re-engineer the car in any major sense, but simply makes a fun car even funner. And, no, I don’t care that there’s no such word as funner. 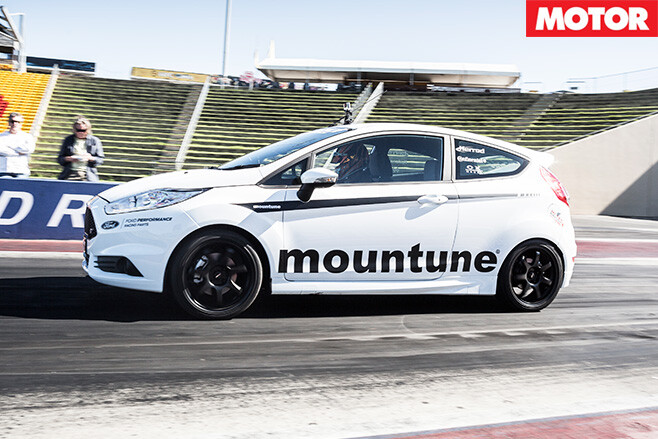 The Fiesta ST is a great little car. For too long hot hatches have become too soft and don’t live up to the proper hot-hatch tag. But this thing is a lot of fun to drive – you can throw it around, you can slide the rear, but it’s still got really good power and good overall dynamics. The modifications have really enhanced the overall package of the vehicle and just made it that bit better again.”