Sometimes it takes real guts to do the unpredictable. I mean, how many times have you heard the warning not to take a knife to a gunfight?

And yet, here is Rob Herrod fronting up to Hot Tuner in an XR8 that boasts less power than the one MOTOR drove a few issues back. But, according to the big fella himself, sometimes – to borrow another cliché – less is more.

See, if the first version of the Herrod XR8 had a downfall, it was that it had too much power. Yeah, yeah, I know – heresy. But bear with us here. Take a big, heavy car with a distinct limit to how much tyre you can get under its butt, insist that (for Hot Tuner) it wears non-R-Spec road tyres and then stuff the engine full of boost and PULP. What happens?

All too often the result is a car that goes up in smoke off the line, even at a dedicated dragstrip like Sydney Dragway. 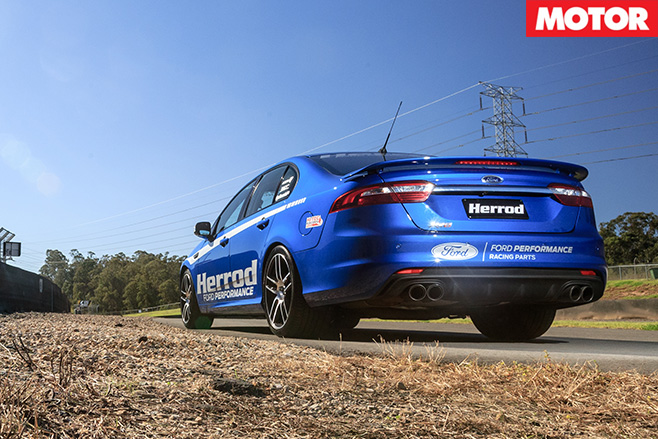 Robbie Herrod knows as much: “These are heavy cars. You can only give them so much power before they don’t go any faster. What we’ve tried to do here is strike a balance between enough power to do well, but not so much that it’ll just wheelspin off the line. You want 800 horsepower? We can give you that, but for Hot Tuner, it made more sense to keep a lid on it.”

Don’t believe him? Okay, take the Hi-Torque HSV Clubby that was also along for the ride at Hot Tuner this time around. Herrod’s Henry was less than two-tenths slower across the 400m and was actually about three-tenths faster to 100 from rest.

And since they weigh about the same, used similar tyres and were driven by the same driver on the same day, you would reckon they would both be punching out about the same power, right? Nope. 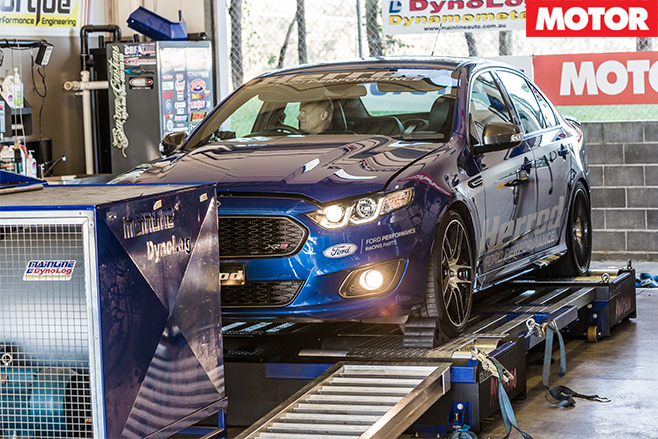 On the dyno, Herrod’s XR8 made a stout 345kW at the wheels while the Hi-Torque Clubsport produced 517kW – a full 172kW, or 30 per cent, more grunt. But if you’re pasting it on the ground rather than sending the car forward, then it’s wasted.

Herrod’s other smart move was to opt for an automatic this time around. And hey, let’s not lose sight of the fact that 345rwkW is pretty handy next to the 335kW that Ford claims at the crank snout for the XR8. The big changes are the addition of an intercooler, a retune with Herrod’s custom engine and trans calibration and a cat-back exhaust. A K&N air filter helps and a high-flow fuel pump adds a safety margin. 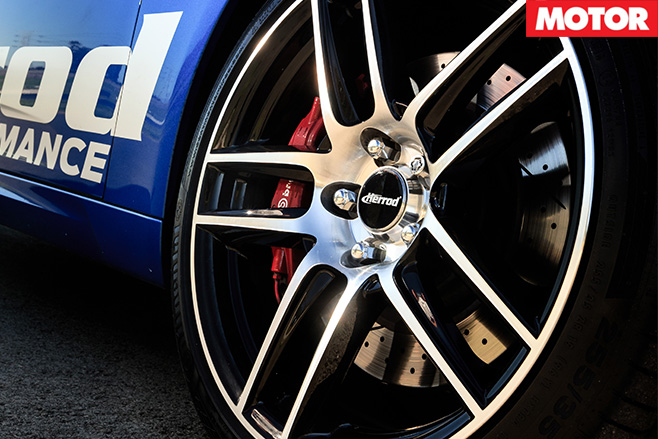 Robbie has also developed his own spring package, which he matches to Koni shocks and then bolts on his own modified rear suspension blades that allow for a 295 rear hoop. Fronts are the same ContiSportContacts but in a 255/30 fitment and the wheels in this case are Ford Motorsport rims standing 19 inches tall.

All up, this XR8 represents a $17,038 (supplied and fitted) hike over the stocker, but if you just wanted the engine mods, you’d be looking at slightly less than 10-large. 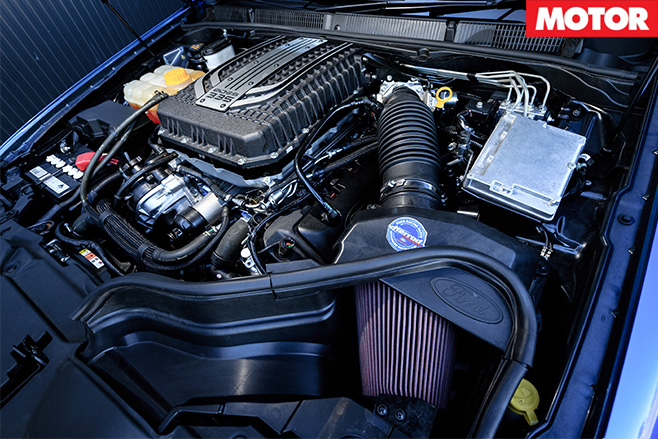 No track star, but a better XR8 in every area

Just in case you somehow mistakenly took the introductory comments of the Herrod XR8 as some kind of message that it isn’t fit or, indeed, fast, think again. See, those 345kW at the Continentals probably equate to something like 430 or 440kW at the crankshaft. And that, as anybody who has ever piloted something with that sort of poke will tell you, is not something to be prodding with a stick through the bars of its cage.

True, the XR8 ain’t no racecar and, on road tyres and a slush ’box, it wouldn’t be our first choice of track-day weapon either. It is sharper than a stock XR8, though, and that’s all down to the suspension package that took up many hours in the Herrod workshop. 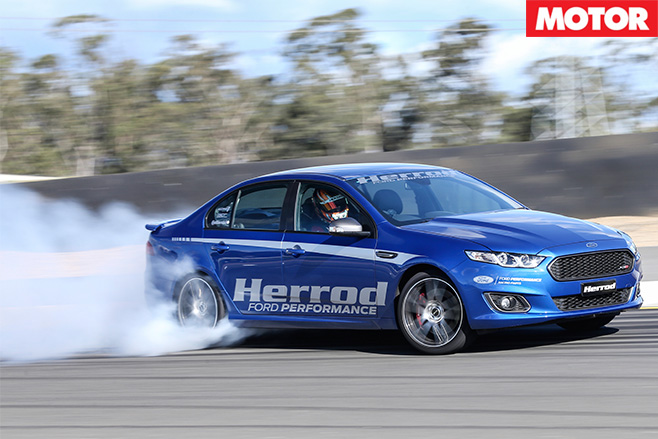 The engineers made sure the spring and damper rates were not only spot on in their own right, but also a harmonious partnership when plonked under the FG’s bodyshell.

It works, too. The end result is not only sharper than a stock XR8, it actually rides better, too, and will soak up plenty of kerb-bashing before it starts to think about throwing a secondary bounce into the show.

Actually, this ability to behave more sharply but still ride well is possibly the most unlikely aspect of the car, but also possibly the one that you’ll come to appreciate most as the months and kilometres roll on by.

There are, of course, limits imposed by the laws of physics. That limit is reached when the front tyres can no longer deal with the combination of the steering angle dialled up by the driver and the sheer mass of everything south of the front axle that’s attempting to drive the whole plot in a straight line. Not surprisingly, the straight-line thing will eventually win out. 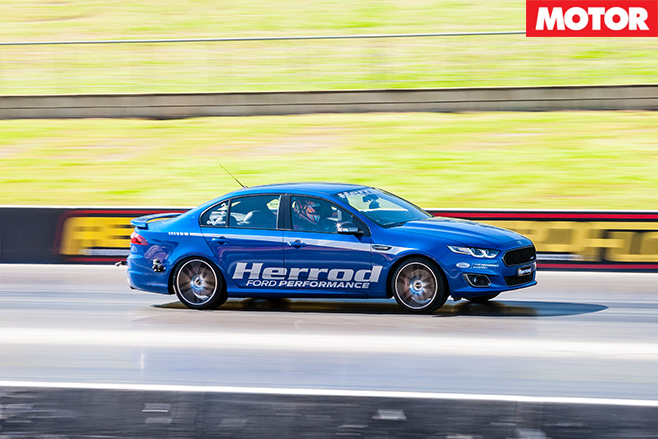 It’s also fair to say that the XR8 never really loses the feeling of being big and heavy. This is because it is big and also heavy. Again, no surprises there.

This physics stuff manifests in a lap-time of 64.4sec – hardly up the pointy end of things, but again, this is not a track car by any stretch. And to call once again on the comparison with the Hi-Torque Performance Clubsport, with which the XR8 most closely matches on weight and wheelbase, the Henry was almost two seconds faster around the track, despite all those extra kilowatts under the HSV Clubbie’s lid.

So a racecar it isn’t, but the way the grunt comes on hot and strong, and the long wheelbase of the Falcon package, means this would be an awesome drift car. The combination of fairly benign reactions and huge wallop means you can pile into just about any corner – no, any corner now I think about it – and dial in the amount of oversteer you want just by regulating how much clog you throw into the mix. From there, you can fine-tune the angle of lunacy with a very intuitive combination of tiller and gas. 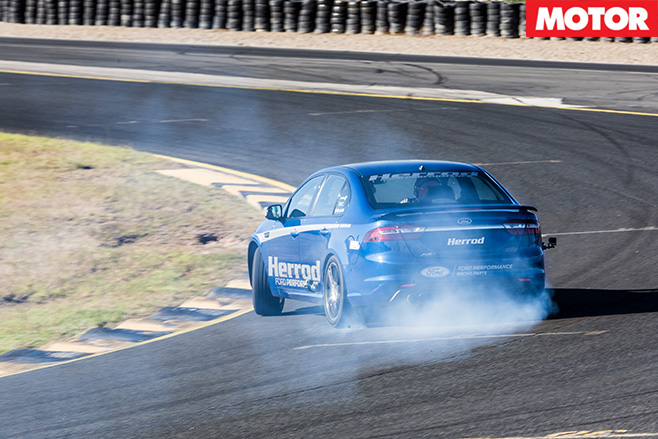 It’s one thing to try this yourself, but another altogether to watch Luffy do it at high speed. The Ochre One would loom into view before the South Circuit’s main straight, hammer down past the post and then drift the XR8 into a glorious, smoking, long range, low-flying strip of wrongness, leaving two black lines and a haze of rubber smoke to mark his passing.

This is also why the Herrod XR8 started losing chunks of its rear ContiSports about three laps into proceedings. 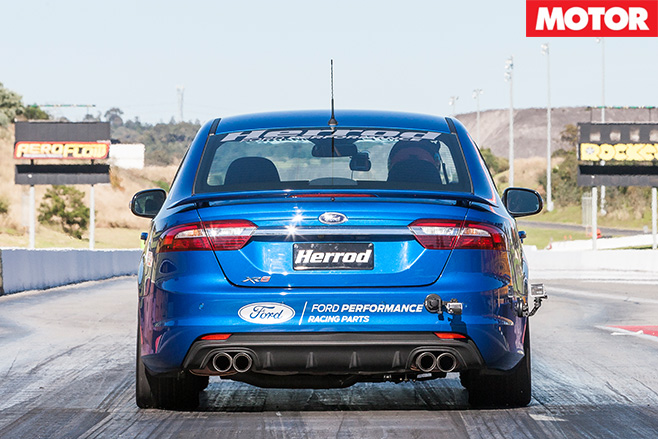 “This is a really fun car. The engine modifications have given it that little bit more power, so it’s got really good low-down torque. It doesn’t hurt the driveability off the corner or anything like that and it’s still got plenty of traction. It’s got so much more torque and it’s there throughout the whole rev range. Herrod has tightened up the whole package and made it that bit more enjoyable to drive.”