We can all admit that modern performance cars are as good as they have ever been.

We’ve never had faster, more comfortable or, arguably, as attractive performance cars as what is available to punters off the showroom floor today. It’s easy to point to old cars that nail one out of those three, but all together? Modern cars have them covered (as painful as it is for me to admit as an avowed lover of old tin).

So why would you modify one of these supposedly perfect creatures? Because there is still plenty of compromise and safety margin built into these cars. The engineering underpinning them can support so much more, so why not give them a tweak to unleash a bit more? Why not personalise the cars to stand out from the crowd?

It’s these questions that led MOTOR to kick off the first professional shootout for modified late-model performance cars in Australia back in 2008. 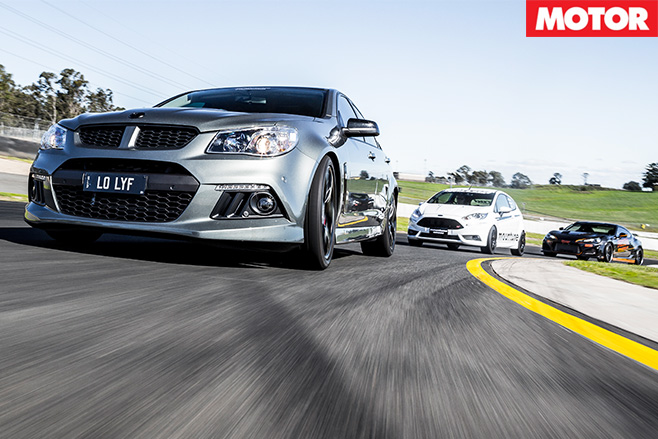 Aussies love getting brand new cars and changing them. It might just be a set of wheels, tyres and an exhaust, or it could be completely torn down and re-engineered straight off the dealer’s lot – the fact remains we love our cars and we love making them better looking, hammer harder and corner faster.

But how do you actually know if Company A’s package will do what it says, or if it’s better than Company B’s pack? This is where Hot Tuner comes into its own, putting professionally-tuned vehicles to the sword with the aim of comparing apples with apples and figuring out if anyone is telling fibs. If anyone is telling porky pies we find out double-quick and haven’t ever shied away from telling the world.

The cars themselves have represented every modifier niche in Oz. We’ve had everything from tiny supermini hatchbacks, bad-arse blown V8s, a Harrop-tuned 458 Ferrari and Tekno Motorsport’s Lamborghini Aventador turn up to run the gauntlet. 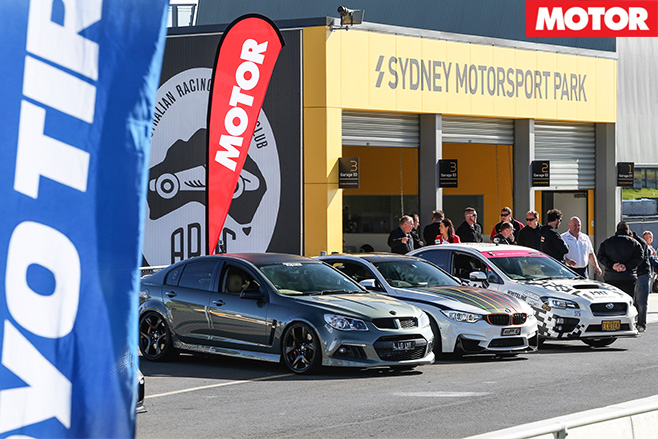 Variety has always been the spice of life, but this year steps were taken to ensure the quality of the field was at its best and we were happy to sacrifice some quantity for it.

Despite only running nine cars this year, the demographics they cover means we have one of the most diverse fields in the event’s history.

We’re putting muscle cars, sports saloons, hot hatches, superminis and turbo JDM drifters together in a pot, stirring vigorously and baking on a high heat until one is crowned winner.

Smack talk between the various tribes who make up the tuner scene in Australia isn’t anything new, but as it’s such a wide church you often wind up with apples being compared to pears or, in some cases, candied bacon.

Running the cars we did this year allows us a unique opportunity to really show where each vehicle shines and why. It also allows us to compare bang-for-your-buck through the use of the BFYB algorithm. 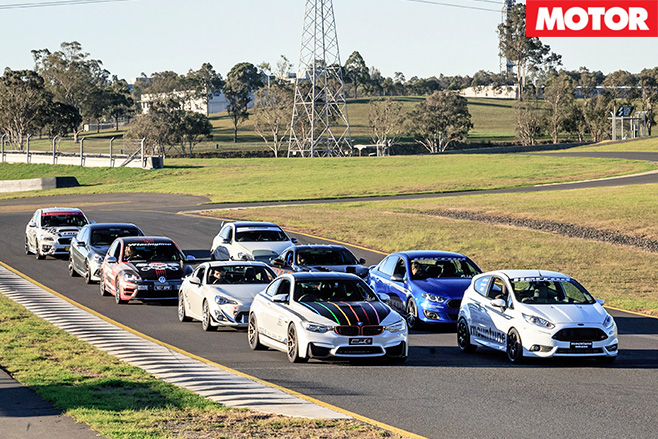 At first glance you might seem a bit bummed we’re only putting nine cars through the wringer, but the fact remains we’ve had more time with each car. We’ve been able to get journos to drive them, to prod, poke, peer and also talk extensively to the companies responsible for tuning them to fully understand the wherewithals behind each machine.

The fact we charged an entry fee to cover the huge costs involved in running the shootout also meant tuners had to commit a long way out. Simply put, a few couldn’t put their money where their mouths were and didn’t sign up for the three-day event in the Harbour City.

This year we also held all entrants to a minimum level and standard of modifications. In the past it would have been all too easy to turn up with a Bugatti Veyron wearing carbon wrap and stick-on white wall tyres just to take a win, but having relevant cars with mods you guys and gals can relate to is far more important to us. And we make no apologies to the Thursday Night Maccanats crew for saying that we don’t count stickers as a modification.

We’ve also specified all tyres must have a 140 treadwear to count semi-slick R-compound rubber out of the competition. This is a rule directly borrowed from World Time Attack regulations and it’s all about having the vehicles represent what people actually drive on Aussie roads. While some do use them on their street cars, it really isn’t representing an honest street car in our books. 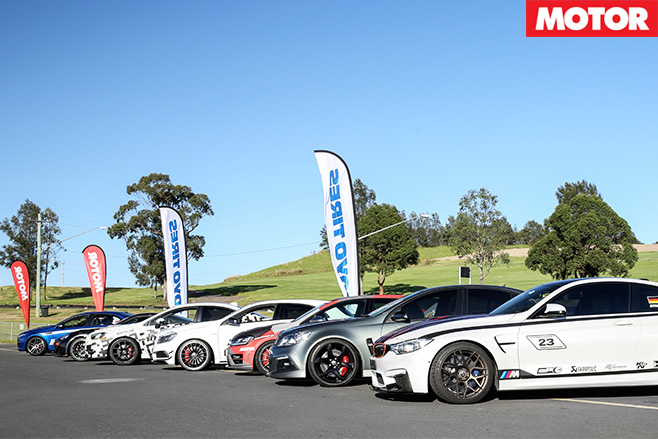 While tyres are more tightly controlled, we’ve opened up the regs on fuel to allow E85. Yes, corn booze juice is okay for 2015! This comes on the back of increasing availability of the tuner-friendly fuel across Oz.

While it isn’t available everywhere, especially in full-freight E85 (most is around E60-E70), many tuners now have options to set their cars up on it and claim huge increases over and above traditional 98RON PULP.

Many of these gains come from being able to wind a lot more ignition timing into the motors, along with healthy boost increases. This assists in improving the boost threshold (response) on turbo cars as well as how aggressive tuners can get on aspirated or supercharged cars – the throttle response can be knife-sharp!

We hand-filled every car when they turned up to scrutineering on Monday night and then sealed the tank to ensure parity. Entrants were given the choice of 98RON PULP or E85, and many chose to show off their gasohol-tuning prowess and opt for the corn juice.

Tuners were also invited to use their own driver on the drag strip. Complaints levelled at the testers and procedures in year’s past encouraged, to put it meekly, MOTOR to throw the doors open for entrants to bring their own hot shoe along and launch the cars they built. However, while the tuners were given the option, nobody chose to take it up and instead left the straight-line testing of their steeds to the experience and natural born speed of Warren Luff. 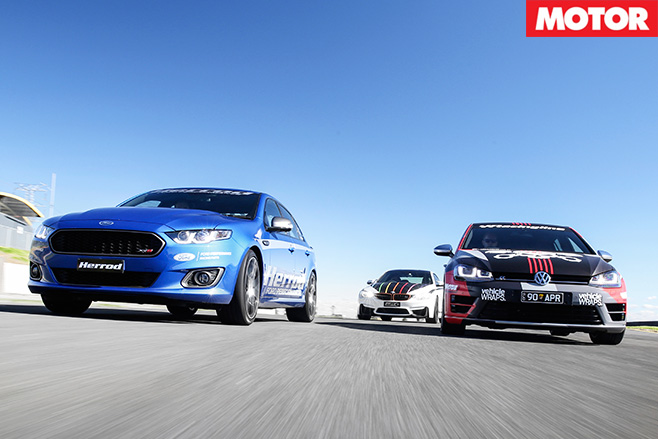 It left us with nine cars from eight tuners, along with five journos, one professional driver, a gaggle of photographers and videographers, two race tracks, a dyno and a hell of a job to put it all together for you lot.

The 2015 Toyo Tires Hot Tuner Challenge has been a massive effort from all involved, but running Australia’s only professional tuner shootout was never going to be easy.
Read on to find out the skinny on who turned up, what they brought and who did what against the clock.

We had Luffy test acceleration and braking at Sydney Dragway, literally over the crest of the hill from Sydney Motorsport Park. If you know how heavy a car is and how fast it covers the standing 400m sprint, you can actually extrapolate out how much rear-wheel horsepower it’s making with a surprising degree of accuracy.

We didn’t need to rely on the old Moroso slide calculator as we have a high-tech Vbox full of computer technology and quite a lot of witchcraft. Luffy did three runs in each car, recording the 0-100km/h, 0-400m and then 100-0km/h for each. 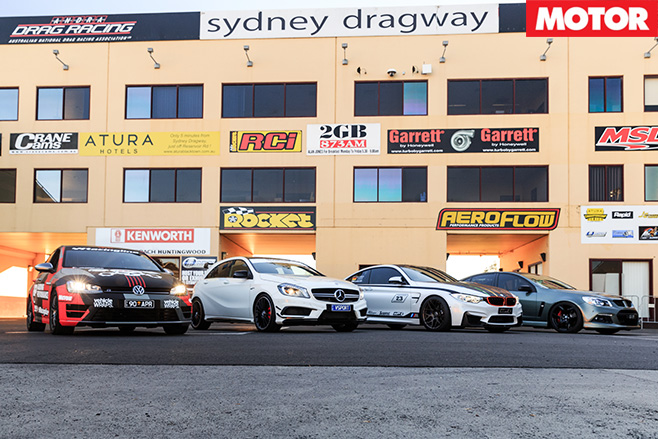 Due to the excessively greasy surface, some cars needed extra runs to complete three full, safe runs. This year we actually let testers nominate a driver of their choice if they wanted someone for their specific car, owing to criticisms of the testing procedure in the past.

For 2015, a control fuel was used to ensure everyone played fair – either E85 or 98RON was fair game but it had to be hand-cranked out of the Hi-Tec Fuels drums. 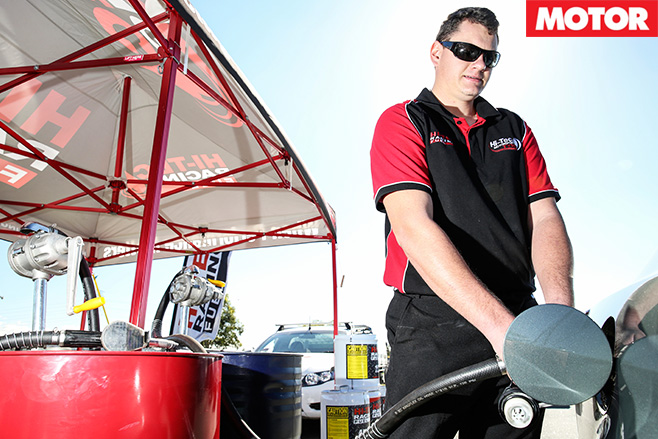 We needed to know that these cars, which were going to cop a righteous flogging over three days with no service time in between, would have a stable fuel in their tanks.

Detonation in these circumstances could be catastrophic to these motors and we’re not in the engine-killing business, so we needed to know the fuel had the required octane for the tuners’ handiwork.

We once again had the boys from Mainline Dyno bring one of their gun chassis dynos along to Hot Tuner so we could record peak power at the wheels for all the entrants.

Mapping out the power curve also gives us an indication as to how the car will drive on the street, showing if the grunt arrives in a few hundred RPM, or climbs in a linear arc.

The difference is that the former will generally drive quite poorly outside its window and then come on in a rush of fury with all the subtlety of motoring journos at an open bar. 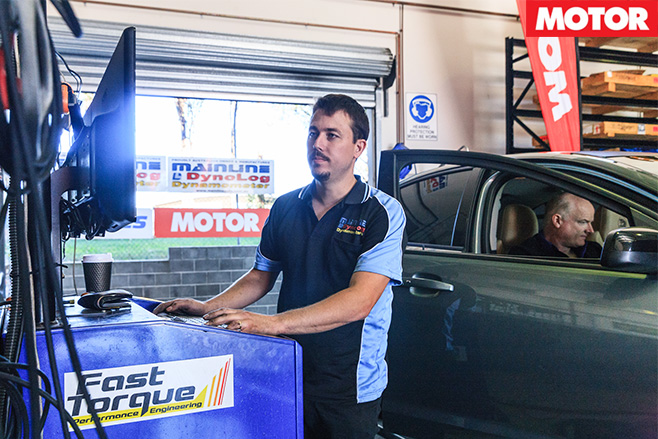 The latter, however, is more like a factory-delivered package that has power under foot all the time. It’s less likely to overpower your tyres in a rush and most would consider a linear power curve to be faster everywhere outside the drag strip.

Cars are individually strapped down and run three times, back-to-back, to get the maximum power figure as measured at the wheels.

We once again called upon the blokes at Fast Torque Performance Engineering to house the dyno challenge.

With their location just around the corner from Sydney Motorsport Park, and with plenty of experience running dyno challenges, it made them the perfect guys for the job.

Performance testing modified cars on public roads isn’t smart, so we reserved a day at Sydney Motorsport Park’s twisting, tumbling South Circuit. We needed to know just how these cars behaved at their limit; and while the larger Grand Prix circuit at SMSP is faster, the tight South Circuit shows up glaring errors in handling set-up or deficiencies in tuning.

The tight, heavily undulating layout pushes tyres and suspension, two areas which can make or break an upgrade package. And it also shows when tuners are relying on a good factory package to hide a lack of their own R&D. 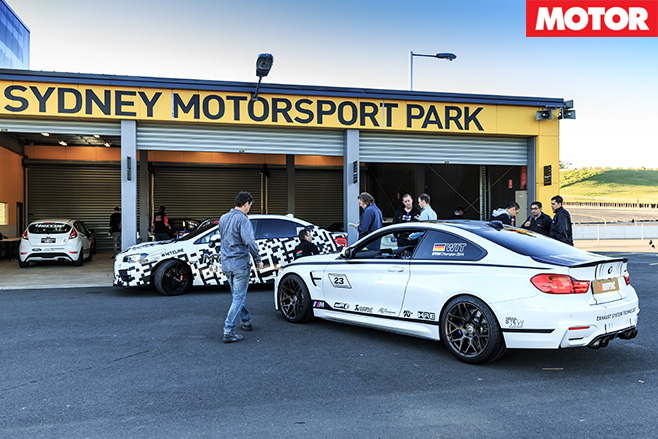 After Luffy did a flying lap in each car to record a time, the journo assigned to write up each car got to cut a couple of laps to really get a handle on how the cars behaved at speed.

Thankfully, no journalists were harmed in the making of this event, although Morley got a bit of dirt in his eye and Glenn Torrens almost fell off the tyre barrier during a regular bout of over-excitement.

We have to thank Sydney Motorsport Park for allowing us to base the 2015 Toyo Tires Hot Tuner Challenge out of the South Circuit garage, using it as Parc Ferme from Monday night, scrutineering and also the hub for photography for the three days.

Warren Luff: the man, the myth, the hairdo and smile so bright it can be seen from space. 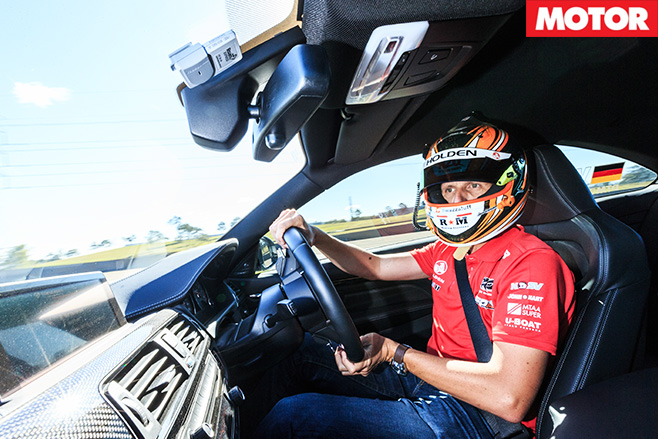 He’s our gun tester because he’s one of only a couple of people in Australia who can hop behind the wheel of a whole range of totally different cars and be not only eye-searingly fast, but consistent too.

His experience driving fast on road tyres and suspension, and with modern stability control systems, gives him the edge over most other testers, plus with suspiciously little encouragement, he can hang the tail out and blaze fatties like it’s going out of fashion.

Check out the cars that competed at Hot Tuner 2015: