If some is good, more is better.

That’s something of a mantra for anyone building or playing with fast cars, but take that philosophy too far and you lose balance and end up with something of a monster – a car that becomes less than the sum of its parts.

That’s absolutely NOT the Tunehouse-modded 86. Tunehouse hasn’t smashed the boundaries of the lithe and nimble Toybaru’s chassis ability, nor has it gone silly with the spendooly required to make its wicked 86 one of the best-composed all-rounders – showroom or tuned – I’ve driven on a track.

Of course, Tunehouse was coming from a good base with the Subaru BRZ/Toyota 86 twins being all about driving enjoyment through terrific handling and response, rather than all-out horsepower and to-the-tenth track times. 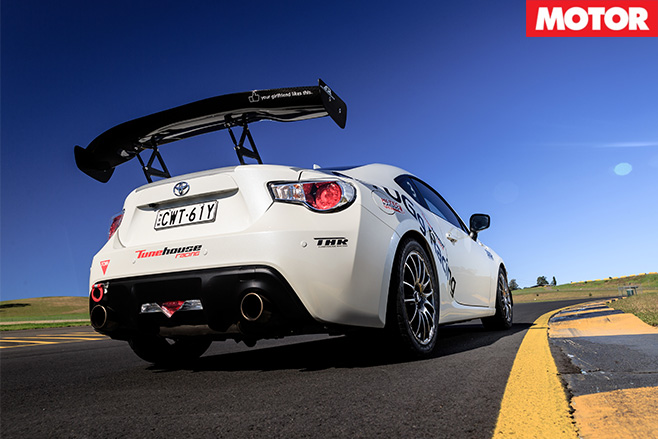 In that regard, the Toybaru is one of only a few cars in history that has been developed from the ground up – even if it’s loosely based on a WRX – to achieve the goal of driving delight.

It’s possible to enhance that excellent showroom package with better grip and handling tweaks – maybe more horsepower from the engine with a light tune – but Tunehouse has filled this chassis with a lot more brawn.

The big ticket item is the turbocharger conversion. Costing $7990, the conversion has been carefully designed as a true bolt-on affair for Tunehouse, which makes it a fuss-free drive-in, drive-out deal for the customer.

“It’s been a step-by-step process,” says Tunehouse’s Tony Tran of the design, development and testing process. A process that ensures not only a big boost in grunt, but a long and trouble-free life for the standard Subaru-built flat-four engine internals. After all, that “less than the sum of its parts” philosophy is really rammed home if an engine is pushed too far and decides to toss its internals. 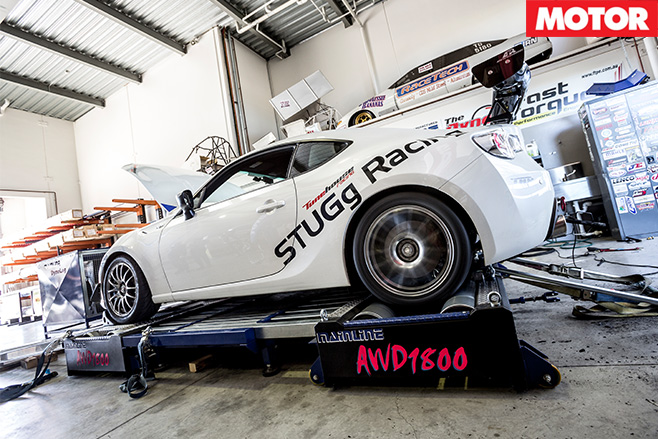 Tunehouse bought and built its own car for development. Because the only real way to find limits is to go past them, the car soon had 300kW for dyno, street and track testing.

As proven on the dyno, the boosted flat-four spits out around 245kW to its 225/45 R17 Federals. According to Tunehouse, that output is safe for the internals and really wakes up the nimble chassis’ performance.

Brakes are also an essential upgrade – not just for the better performance and extra confidence they provide, but for street-legal engineering/rego, too. For $4K you get a front upgrade of AP Racing four-pot calipers over excellent Aussie-made DBA two-piece rotors. 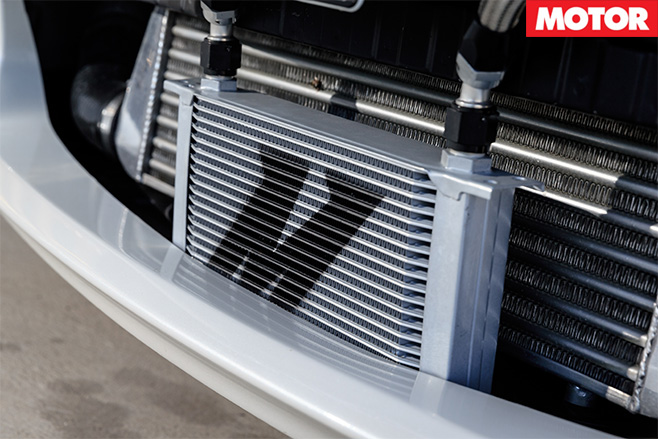 There is some other under-bonnet hardware fitted to Tunehouse’s demo car, too. “From our track testing, we know that [reducing] oil temp is essential for the engine for track days, but it’s not needed for the street,” Tran says. “Similarly, the clutch: not required, but nice.”

The clutch upgrade includes an Xtreme pressure plate over the Subaru friction plate. And Tunehouse’s experience during its year of testing is that the standard gearbox copes well with the 300kW. 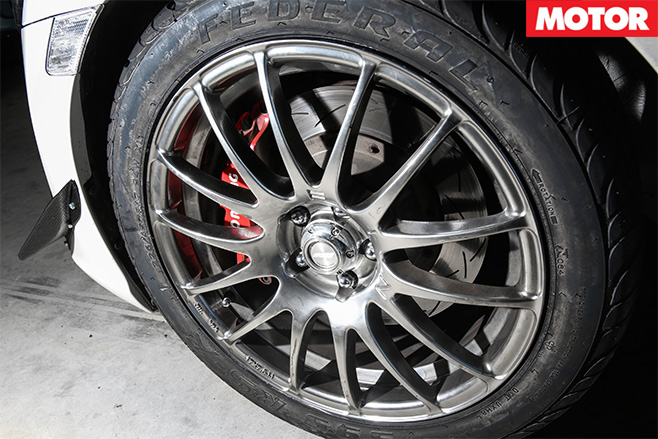 Not too wild, not too mild, this Toyota is just right

On the dragstrip, the Tunehouse 86 knocked out a 13.9-second run, which is clearly below the car’s potential. And here’s why. Even with just 16psi in the rear tyres – to improve traction off the start line – when 247rwkW teased the tarmac, Luffy found the only way to quell wheelspin was to feather the clutch, even after four or five practice launches and burnouts to warm the tyres.

Thankfully the car didn’t suffer badly from axle tramp that can, at best, add to the car’s time or, at worst, break a diff or axle. 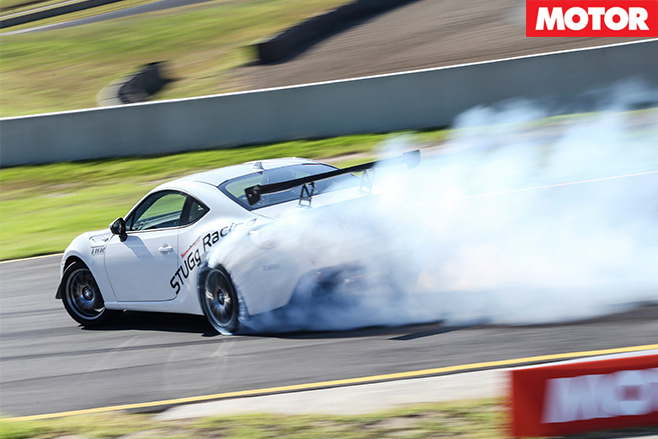 With the technique sorted and Luffy’s left foot up and right foot down, those of us watching from track-side could see that the car was burnin’ its treads for the remainder of first and most of second gear, and it emitted a decent squawk into third. Yep, wheelspin.

Don’t take that as criticism. The 182km/h top-end speed means this thing is hauling, and as anyone who has tried to build themselves a daily driver/drag-racer/track all-’rounder will know, ticking all those boxes with a single suspension tune is a difficult, nigh-on impossible task, even with quality hardware such as the MCA Suspension hardware under this car.

Getting a car to hook-up is hard work and to make this car a straight-line warrior, rather than an all-rounder, would probably see a full second sliced from its quarter-mile time. 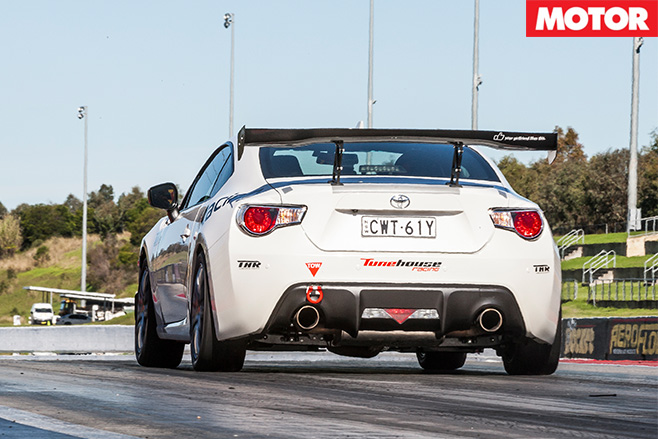 Already a respected drivers’ car from the showroom, the tweaked Toybaru impressed in the roundy-roundies. Its Australian-made MCA Suspension Pack consists of springs and dampers both ends and camber plates and a strut brace up front. They’re time-honoured and typical hardware upgrades for a front-engine, rear-drive car but often, overzealous spring and damper rates can upset handling.

Not here. I only had three laps in the little warrior – hardly time for me to settle-in to the seat and driving position – but even in those few short laps around the circuit, the car was a terrific blend of straight-line punch and engaging, feel-some cornering.

There’s good balance to the chassis; progressiveness of the wicked-up engine’s power delivery meant there wasn’t any stepping-out at the rear due to the boosted torque overwhelming the grip as the throttle was squeezed. Nor was there any understeer – something else that can afflict a power-heavy car with a mismatch of front-to-rear grip. 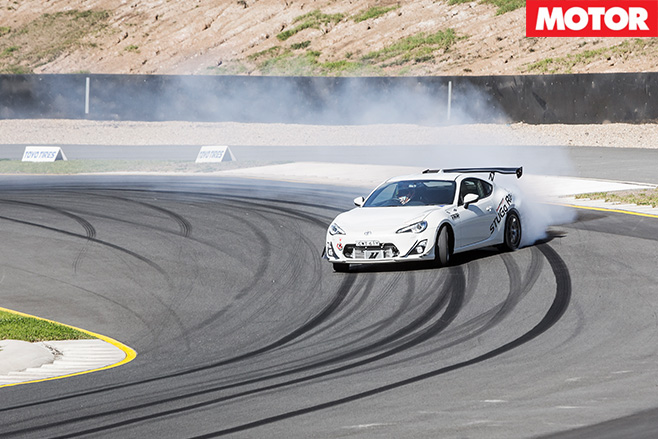 The extra performance from the DBA/AP tweaked brakes put a big cheesy grin on my face with great initial bite and a high but sensitive pedal that inspired confidence. On-track or off, few things take the fun from a good fang than a brake pedal that’s long when trodden on.

Thumbs up for the on-track capability and it’s a big gold star for the low/normal-speed driveability, too. Engine–wise, there’s no grumpiness or bucking around, as is sometimes the case with cars that have been enhanced with big power but scant regard for running around-town.

The ride is firm without being harsh and the overall package is something you would be happy to drive to work each day… with Friday on your mind. Top result. 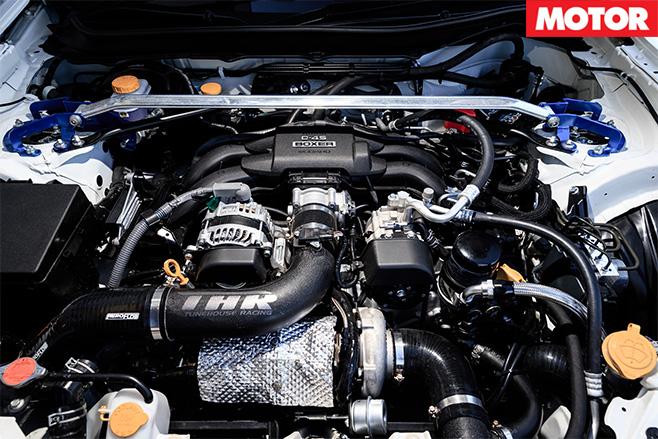 “It just goes to show how good this 86 overall package is. It’s not as track-focused as the other 86, but just the modifications of the engine, brakes and suspension make it such a fun car. And again, it takes that great platform that the 86 is and takes it to that level where it’s a good track-day car, but it’s still a very useable road car. It’s not like you’re losing its driveability on the road to make it an out-and-out track car.”