Tricked-up base WRX gives the STI a lesson in performance

Don’t buy an STI. All you’re buying is a bullet-proof gearbox and some bling. This thing will crap all over an STI.”

And, with those words, MRT Performance head honcho Brett Middleton flicked the switch to duck-and-cover. But Senor Middleton is convinced that anybody after a road-burning Rex would do well to forget the STI and instead start with the base-model WRX which, BM says, is a better starting point.

“The WRX has a twin-scroll turbo, so it spins up faster than the STI. This thing (the MRT-modded car) is building boost longer; the standard car tapers off the boost too early. All you need to do is put a tune in it and it’s quicker than an STI. 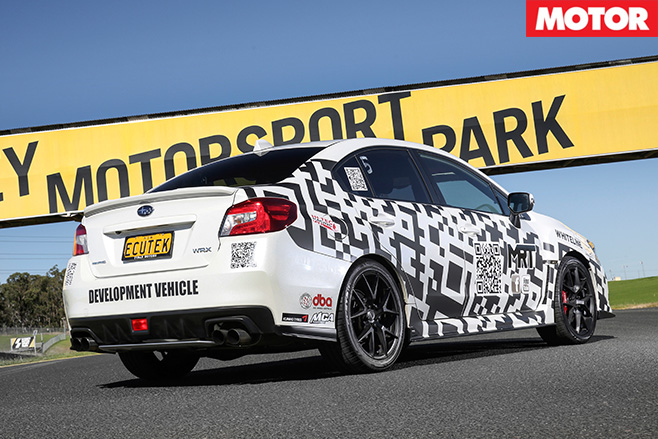 So what exactly were those fiddles? Well, let’s start with the MRT Power Pack that gives the flat-four a new set of parameters to work with. There’s also an alloy pulley kit, a Verticooler top-mount intercooler (which is bigger than the stocker and tilted at a better angle for air to hit it) an E-flex sensor and an adjustable blow-off valve.

But if that doesn’t sound like a huge change, Middleton reckons the real sweat was in making sure it would all work in harmony with no trade-off in driveability or reliability. 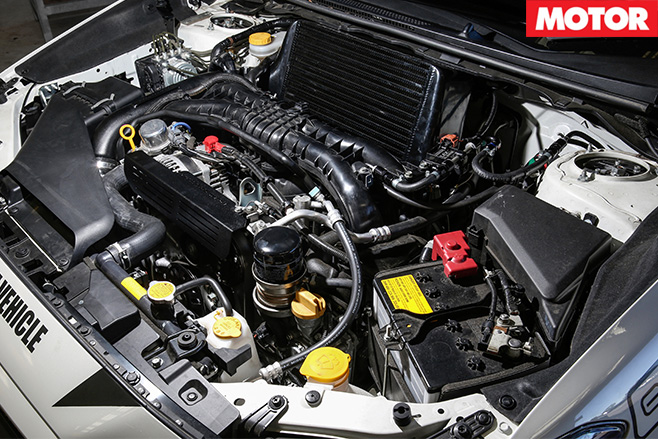 “The real challenge with tuning these things is finding the right tune and matching it with the right exhaust,” Middleton adds. “We did a lot of homework on the exhaust, but even the cold-start program took days to sort out and get right.”

Oddly enough, Middleton reckons the maximum boost you’ll see on this engine is the same 21psi as the stocker, but it’s that more rapid spool up and holding on to boost for longer that makes all the difference.

“That’s it, though,” he admits. “It’s engine-out to get anything more.”

Middleton has a rich rally background and that’s reflected in the way his cars also cop a handling upgrade as a matter of course. In this case, the trick was to fit a set of MCA coil-overs. A shift kit was added as well and a set of ROH wheels and Kumho Ecsta KU39 tyres fill the guards. 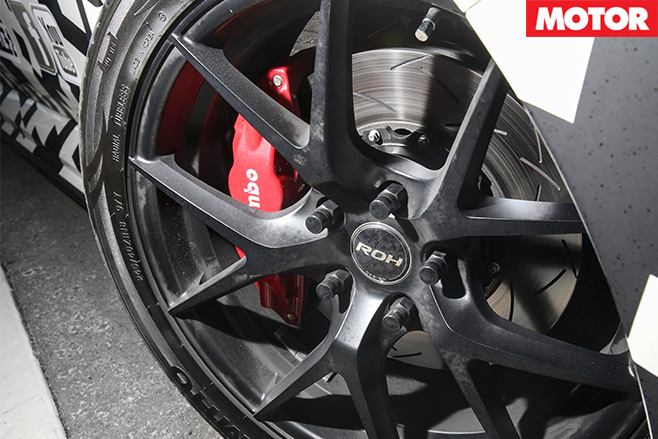 Brakes? Yep, they copped a once-over, too, with MRT’s own Big Brake Kit on the front and its Super Sport Rear Brake Kit out back. And just to make sure you don’t confuse it with a stock Rex, MRT also added an STI body kit.

This level of modification isn’t cheap, of course, and once you’ve ordered your brand-new WRX, you’re looking at adding an extra $21,626 to the bill to arrive at this specification. Which is a total of $65,616. Just as well it will kick the butt of the $50K STI then. 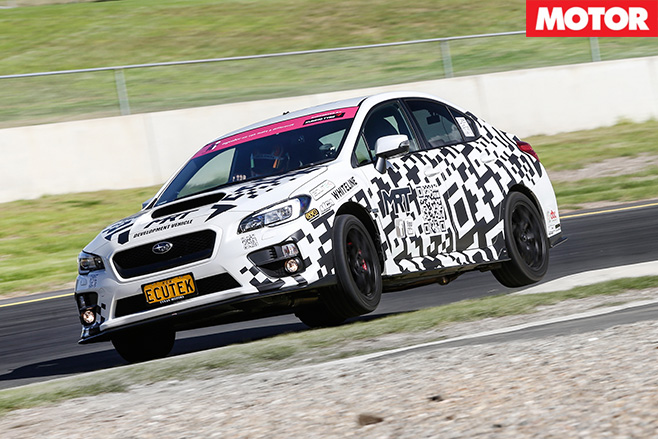 It’s a bit strange to jump into a tuned WRX and not be confronted by the active diff controls in the centre console. It’s a sharp reminder that this is a WRX, not an STI. But if anything, that just makes the anticipation all the more tasty. Can this thing really hand an STI a blood nose?

Um, not sure. I reckon I would want to back-to-back it with the hotter factory version before I made any bold statements. But I can tell you that the MRT Rexie is definitely as fast as the STI, despite giving away half a litre of engine capacity. 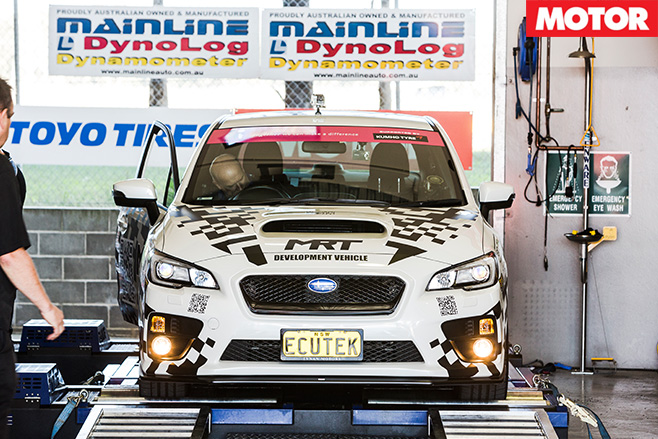 MRT boss Brett Middleton is not kidding when he says the twin-scroll turbo of the WRX spools up quicker than ever before, and the dyno figure of just about 190kW at the treads is proof that the tuning works, because that equates to something like 240 or 250kW at the crank – the stock STI manages a claimed 221kW.

On the dragstrip that amounts to 0-100km/h in 5.8sec and a standing 400m time of 13.7sec. And that’s after Brett had leaned into the window of the car and reminded Luffy that he was dealing with a standard clutch. 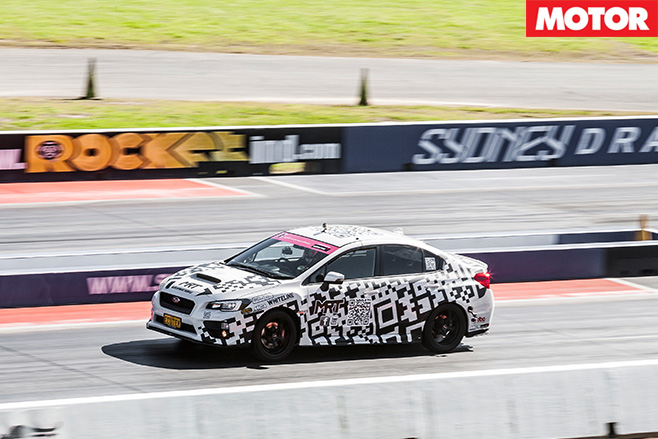 For Luffy’s part, the dragstrip showed that even with the extra grunt, the Rex was still at the point of bogging as he launched. It also showed that he needed fifth gear through the traps at the end of the quarter.

Clearly, on-road roll-ons are going to be the MRT WRX’s thing. Did somebody say real-world performance?

The South (Amaroo) Circuit at Sydney Motorsport Park has a wicked little uphill section after the first couple of turns that points you at a blind crest and then into a downhill braking area before a don’t-mess-this-up left-hander. And the eye-opener for me was just how bloody fast the MRT Subie was across the top and into the abyss of that crest.

Where some cars want to lift a wheel on the kerb on the right-hand side, or feel like they’re gonna get all light on you, the WRX just smashed its way over the top and gripped up, with me hanging on like a terrified barnacle. 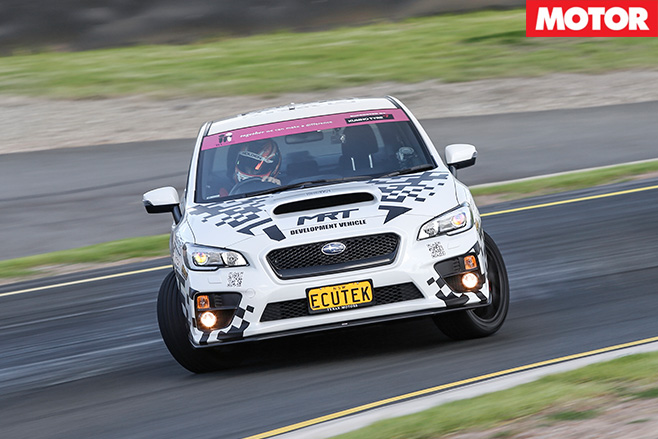 Okay, so all-wheel drive is part of the secret, but equally, the way the suspension is set up is also a big part of this ability to maintain grip and, therefore, speed. Frankly, I reckon the coil-overs on this car are probably where most folks should start when it comes to souping up a WRX.

Unlike a lot of coil-overs (or, indeed, the stock STI) these aren’t rock hard. In fact, they almost feel a bit underdone when you’re pootling about, because the ride quality is better than any stock WRX derivative I’ve ever driven. But make them work and the control is phenomenal.

Yes, the MRT Rex will still understeer a fraction if you jam it in too fast, but it’s a mild case of the pushes and it only really happens in the slower stuff. Meantime, get your entry speed right and the MRT car just loves a good spanking. It actually seems to come together better the harder you flog it.

Maybe it would hand an STI its backside on the track, maybe not, but it would be a hell of a road car with so much more ride compliance, it’d be chalk and cheese. And if you wanted to save yourself a few bucks and delete the STI body kit, which would otherwise set you back $2500, this thing would be a real stealth bomber.

I imagine the problem will be that kids actually want all that active-diff stuff inside so they can play with it and actually make the car worse. But for us grown-ups, the MRT Rex makes a strong case for itself in the real world of speed humps, potholes and the Highway Patrol. 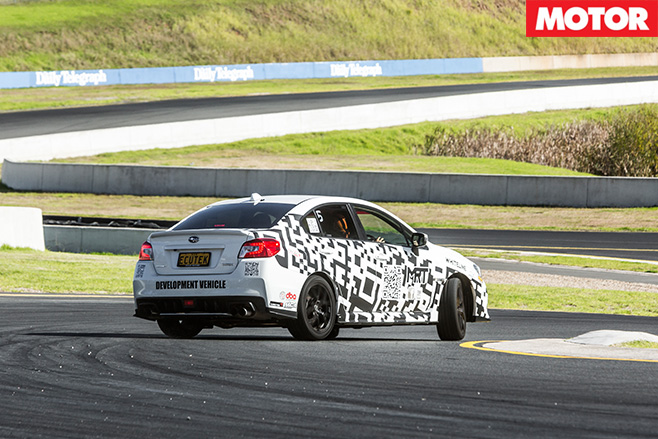 “Such a fantastic engine upgrade on this car and it’s got so much useable torque. All ’round the back sections and through all the tight stuff, it just uses third and fourth gear. You don’t really get above about 5500rpm. It just goes to show what a good tune can do for an everyday car and still make it really useable. This thing would be a really good pocket rocket on the roads.”