When you get to my age, it takes a fair bit to surprise a bloke. You start to think maybe you’ve seen it all before. And then something happens that makes you realise that you don’t know the half of it.

Take DC’s racing helmet, for instance. Now, god knows I’m no fashionista. In fact, I’m the sort of bloke who thinks a catwalk is what you attempt when you’re sneaking home at three in the morning.

But even I know that a helmet shouldn’t sit way up on top of your scone for a result that resembles a pair of humpin’ pumpkins. Clearly, Campbell – bless him – is not aware of this. 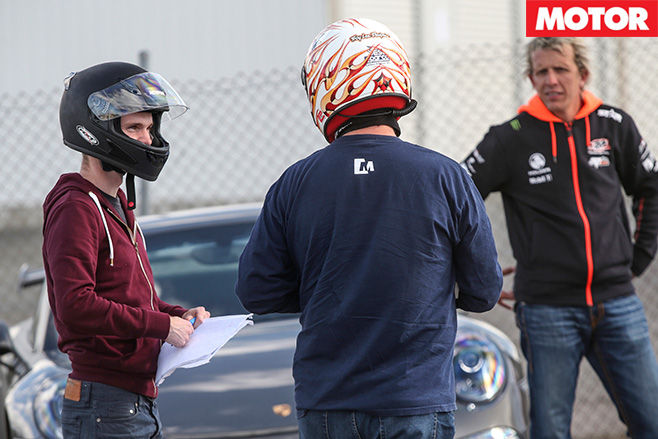 Throw in the black balaclava for a bit more visual oomph and you have yourself quite the sartorial statement (a statement consisting mainly of the words ‘help’ and ‘me’). Seriously, the only thing that helmet was protecting was Dylan’s reputation as the bloke who put the ‘pst’ into hipster. 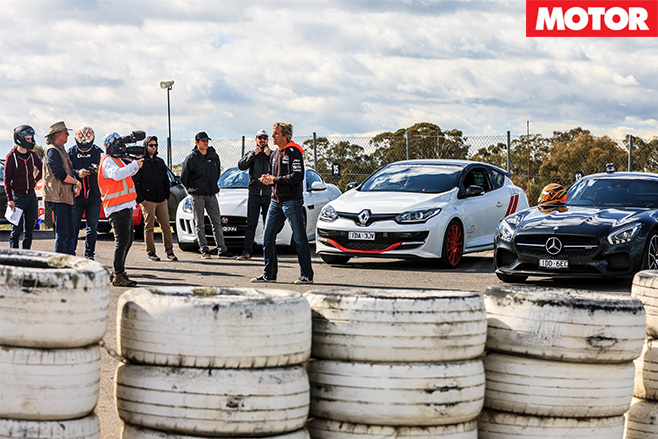 The rest of us? Not significantly better, it should be said. Oh, Luffy looked the part with his I-came-third-at-Bathurst-again team clobber, but, on the whole, don’t be waiting for anybody from Vogue magazine to be planning a photoshoot called The Men of Winton based around PCOTY.

The accepted PCOTY wisdom (an oxymoron if ever there was) is to start tackling the curly little Winton layout in the tiddlers first. This has two main results. First, it allows you to get your eye in, in something that is less likely to tear your head off and eat it. 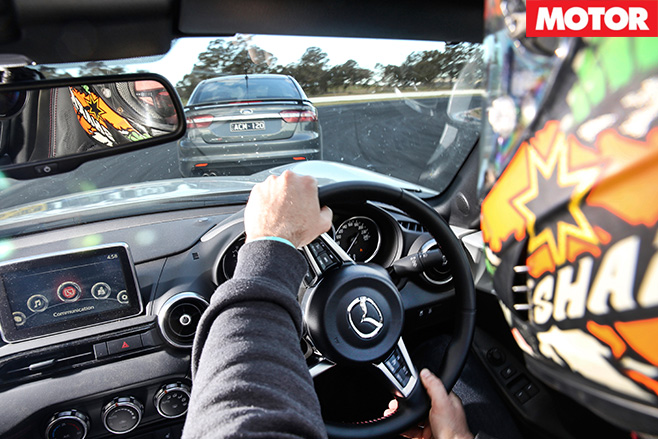 Secondly, it means Luffy can start half-way through the list and get to each car before we’ve had a chance to melt brakes, cook engines and bend gear sticks. Apparently, Luffy thinks this is a good idea. Anyway, with that in mind, let’s tackle the bitty-gritty on the same basis. As in, slowest to fastest.

Anybody left blowing smoke rings at the news that the Mazda MX-5 turned in the slowest lap time needs to recalibrate. Of course, it was always going to be that way. I mean, the MX-5 gives away a full 279kW to either the Jag or the GT S, and even the little Peugeot has 57kW (about 60 per cent more) than the wee Mazda. Not that Winton is a total grunt circuit, but, hey, everything has its limits. 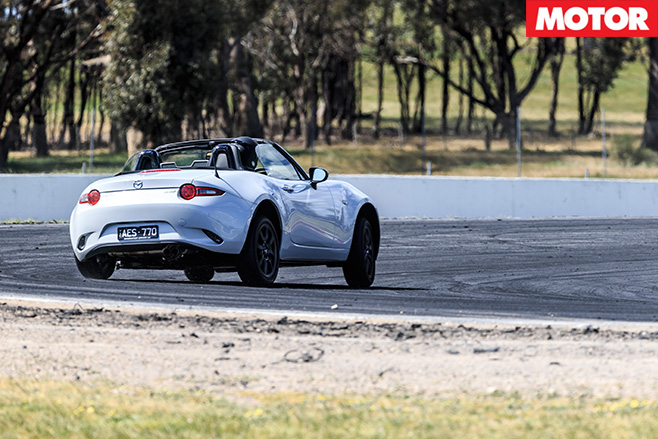 In other ways, the Mazda’s limits are at the other end of the scale; its hairpin speed of 56.18km/h, for instance, was fifth fastest of the lot and was shaded only by two AMGs, a 911 GT3 and the best handling front-drive road car ever made. But more than that, the MX-5 is just fun. Pure and simple: like the original, only with more kit.

The Peugeot was next with a time that was a good five seconds faster than the Mazda, and it did so by having the grunt to stretch out on the straight bits, as well as the short wheelbase that makes it such an effective car to rotate at the apex. 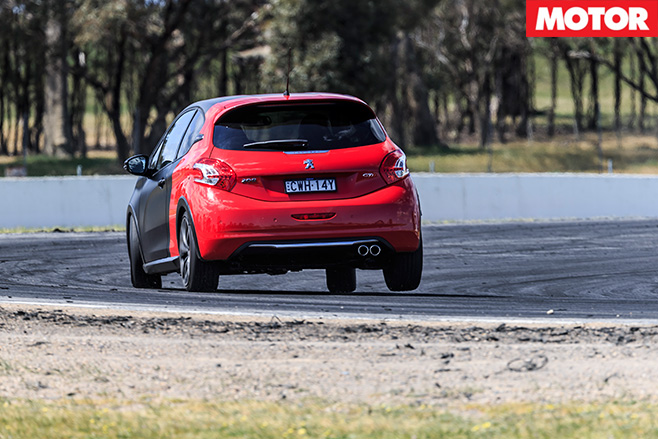 Now, some will argue that it’s a bit too, er, effective in this regard, and it’s true that the Pug demands a smooth entry and that you resist the urge to hang it off the brakes too late as you turn in. But when you get it right, the corner speed is pretty amazing – the 208 was about mid-pack for pace in the fast sweeper and was only about 2km/h off the Renault’s sweeper speed. Respect.

Given the sheer grunt of the Falcon XR8, you might have expected it to fare a bit better on the track. But, as we’ve discovered more than once, the supercharged V8 not only gives the Falc serious squirt, it also has the ability to show the chassis up as being pretty long in the tooth. 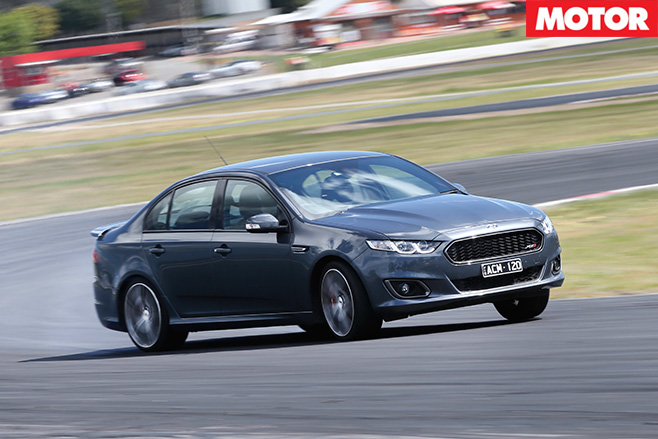 There’s a general lack of grip that limits how fast you can go in, how fast you can apex and how fast you can get back on the noise. It makes for a superb drift car and one that is capable of glorious skids for as long as the tyres will cop it. But fast around Winton, it is not. And even though it managed to go a second faster a lap than it did at BFYB earlier this year, it was still a bit underwhelming.

Still, it was only about a second behind the new Commodore SS Redline, and that did surprise us a bit. Okay, so the SS doesn’t have the shift of the XR8, but in every other regard it’s a sharper thing to punt hard. Felt it, too. 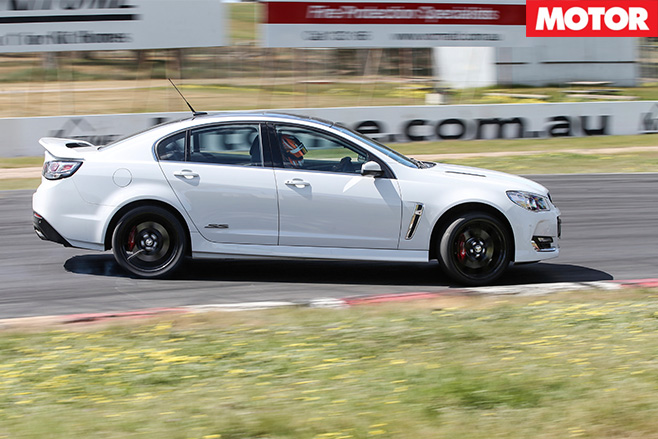 It has more front-end grip, more power-down and it wants to rotate more easily. And this one was a manual, so it probably should have gone a bit faster than the 1:39.5 it managed. What’s going on then? Weight, mainly. When you have that much mass to accelerate, stop and deflect, it’s never going to be easy.

I’m doubtful anybody is ever going to buy a hybrid as a track-day car, even one like the i8. For a start, when it inevitably runs out of battery power about half way ’round the first lap, you have a problem. Also, the quest for fuel efficiency has led BMW to under-tyre the thing (in a performance car sense), so its grip is limited. 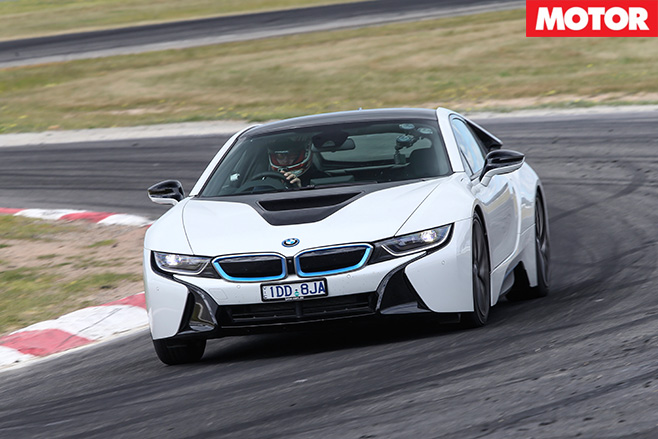 That’s probably why it was second slowest in the slow turns. Things improved a bit in the faster corners, but the facts remain. And the poignant fact is that even though the BMW’s first lap was slower than its later ones, its v-max for that first tour was five km/h up on subsequent laps. Yep, those batteries again.

It mightn’t exactly be a cheap little hot-hatch, but in the context of some of the price-tags here this year, the Megane is a car that punches w-a-y above its weight. To be fair, though, if it hadn’t done well on the track, it would have been marked pretty harshly, because that’s clearly what it has been designed and built for. 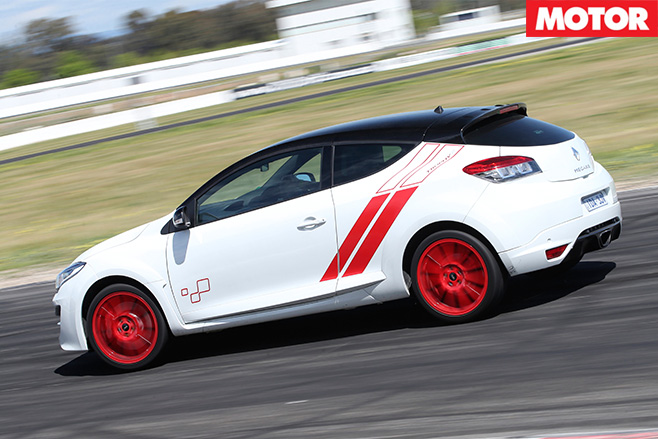 In any case, it tackles racetracks like a champion. But it’s not just fast, it feels fast. And alive. And fun. It’ll make an average driver look pretty good, too, and if this isn’t the best front-drive performance chassis in a road car I’ve ever driven, I’ll go hee. The Renault seemed to enjoy the slightly warmer weather this time, too, beating its BFYB time earlier in the year by more than a second.

Now here’s the surprise packet of PCOTY 2016. Not only did the Lexus surprise us on the road for its blend of pace and refinement, it blew our doors off on the track where it turned its back on decades of Lexus tradition and actually enjoyed itself. 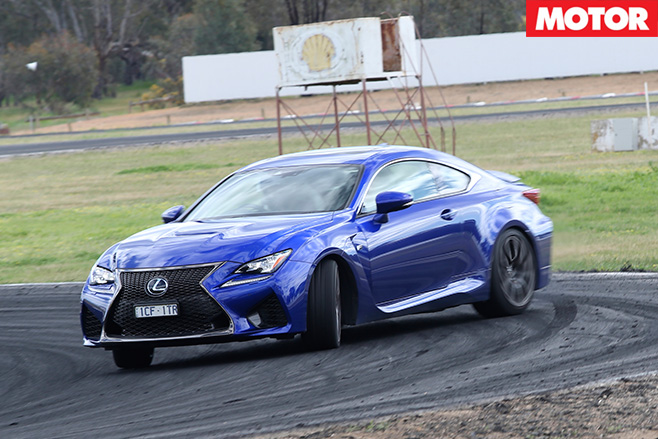 It’s sharp and sticky and even though it’s not the most talkative front end in the world, it all comes together as if it’s been set-up by somebody who gets it. The paddle shifters force the gearbox to play the game and it’s not even bad at drifting. What can we say? Bravo.

AMGs have traditionally been great road cars and somewhat compromised track cars. Which is fine, given AMG owners would admit that doesn’t matter much to them. But the twin-turbo V8 now fitted to the new C63 platform has made us think twice about that assumption. 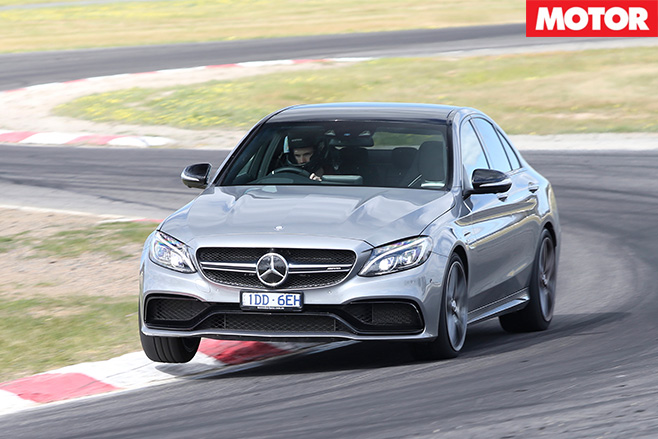 This time around, the C63 is pretty frisky. In fact, so frisky that it doesn’t like you hanging off the brakes after you’ve turned in, because at that point it wants to wag its tail. True. That forces you into a shallower line than might be ideal sometimes, and requires you to be patient before getting back on it. But the grunt is sublime and so is the racket.

The big debate regarding the Jaguar F-Type Coupe R was whether the move to all-wheel drive would do it any favours. Perhaps, in the context of a racetrack, it could have even been counterproductive. 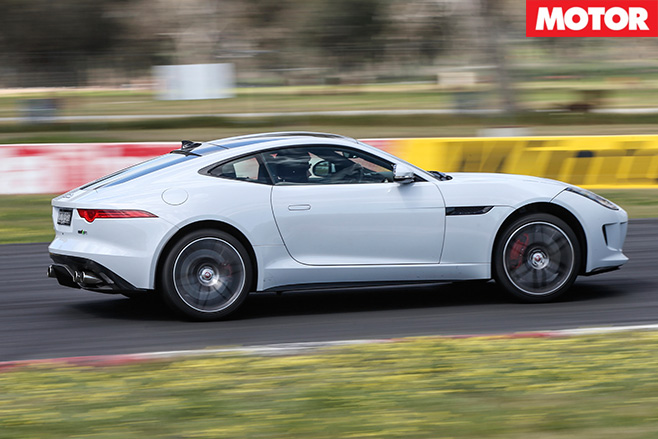 We needn’t have worried, as not only is the all-paw Shaguar a full 1.7 seconds faster than the rear-driver we tested last year, but the new guy only just missed out on a spot in MOTOR’s Top 10 Of All Time at Winton. That said, the Jag’s low-speed corner velocity was pretty dismal, so maybe what you’re gaining in traction out of the corners you’re losing halfways through them.

It’s no secret we like the new AMG GT S much more than the old SLS on which it’s kinda based. And when it can lap Winton 1.4 seconds faster than the SLS, we like the new guy even more. Its corner speed was right up there, as was its v-max (duh). More than that, though, it feels alive when you hit the hotmix. 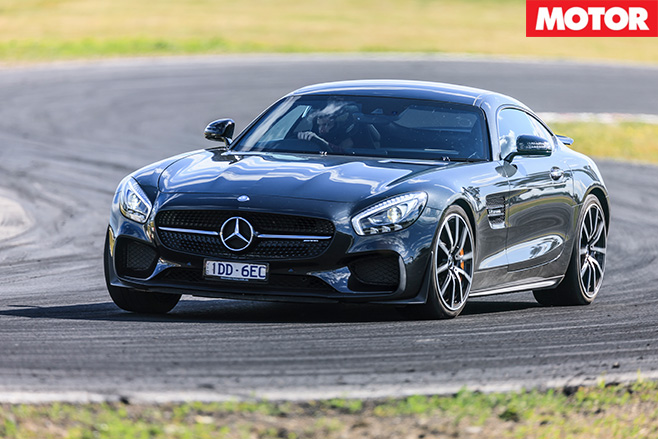 It still feels big and a bit weird to be going so fast from inside a church organ, but the numbers don’t lie. And the only scare it gave me was when I loomed up behind the XR8 and it got a bit squirrely. The AMG assumed the crash was already happening and Merc’s Pre-Safe Plus grabbed me in a Vulcan death-grip.

The only thing that was ever a likely chance to hose the AMG was, of course, the GT3 Porker. And man, did it ever. In fact, the GT3’s 1:30.9 not only trounced the AMG by more than a second-and-a-half, it also hosed every other previous PCOTY entrant – living or dead – around Winton. 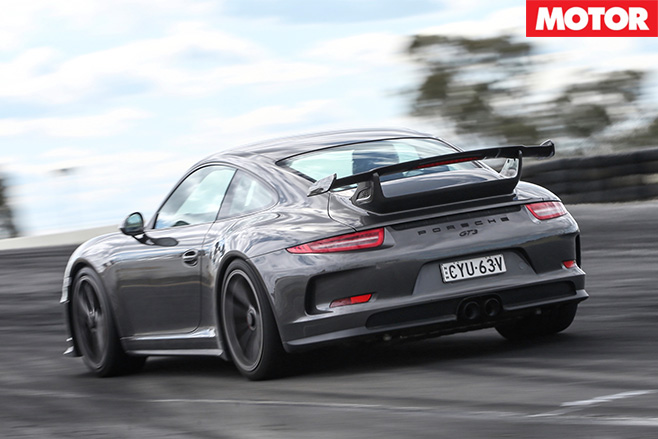 Yep, previous contestants including the Nissan GT-R, the Lambo Superleggera, the previous model 997 GT3 and even the mighty 911 Turbo. All must bow to the new Winton king, the 991 GT3. If this thing is a road car with a few fast bits for the track, I’m a Viking princess.

But I’m not; I’m an ageing yobbo with an overdraught and one gammy knee, and the 911 GT3 is a racecar with number-plates. Wonderful, in other words.