Fact: at 290km/h, a car and its driver are covering a kilometre every 12.4 seconds. Even with a professional drag racer’s reaction times, from the instant the driver sees the obstacle until the moment he pins the anchors, that same car will have covered more than 32 metres.

Fact: in order to cover 400 metres from a standing start in 13.1 seconds or less, a hard-launching all-wheel drive’s acceleration can peak at around 1.0g. About the only way to get it to accelerate faster is to drop it off a bridge.

The good news for the cars and the MOTOR crew this time around was that the ambient temperature at Avalon airport wasn’t nudging its customary 40 degrees in the shade. In fact, it was a pleasant low 20s. But just to prove that the weather gods have a sense of humour, there was the odd spot of drizzle early on, just to tighten any freckle that wasn’t already clenched at the thought of hurtling flat strap down three kays of hotmix.

Of course, even three klicks isn’t enough to wind everything out, so you needed to hit the runway proper (from a slip-road) as fast as possible to give the car the best chance to produce a big number on the radar screen. And it didn’t help that, instead of last year’s 15km/h tailwind, we had a 3km/h crosswind this year. 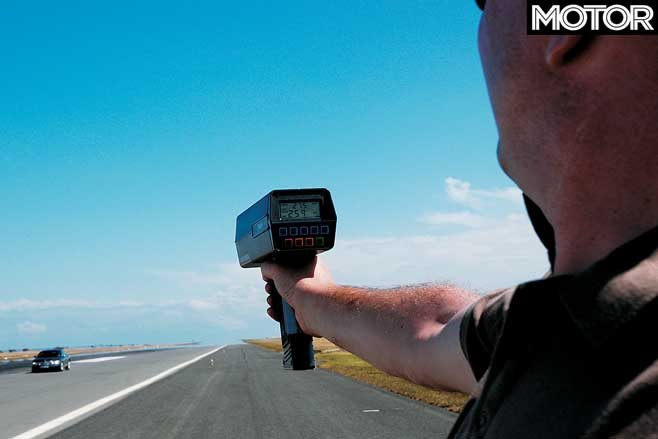 The real work at Avalon, meanwhile, involves Correvits at 10 paces. To keep it – as Ali G would say – real, we need to run each contender across the standing 400m, kilometre and from zip to 100 on the same surface, in the same conditions.

Boiling down the numbers, this year’s field is the fastest and most accelerative PCOTY group ever. The average top speed was a stunning 254km/h, up a full 10 kays on last year’s field, itself up 10km/h from 2002. 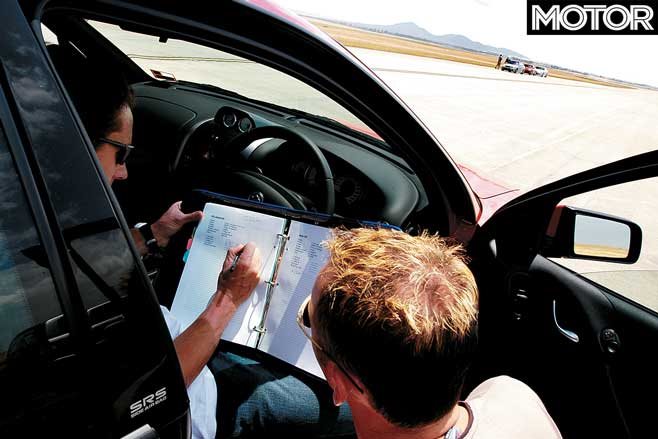 Improvements in acceleration were marginal, with the average 0-100km/h sprint dropping from 6.34sec in 2003 to 6.31 (Lambo clutch caution and, mostly, lower grip out of the concrete with the cooler temp). 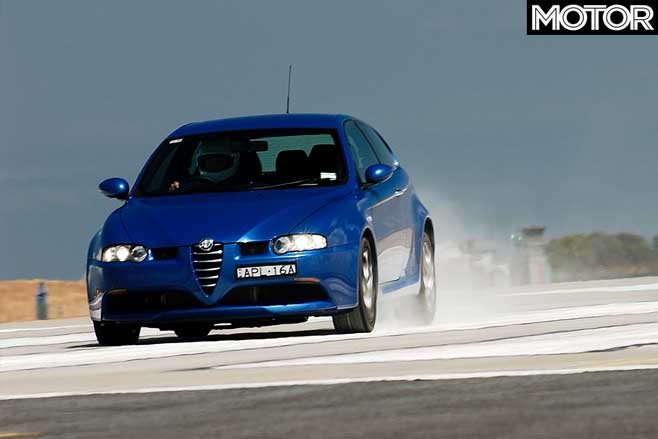 A 184kW front-driver is no picnic to get off the line, and the disappointing 7.24 seconds to a hundred proves as much. The 147 is starting to hit its straps by 400m with near enough to a 15 dead. The sweet-sounding V6 pulls hard across the kay marker and is all done at a whisker shy of 240km/h in sixth. 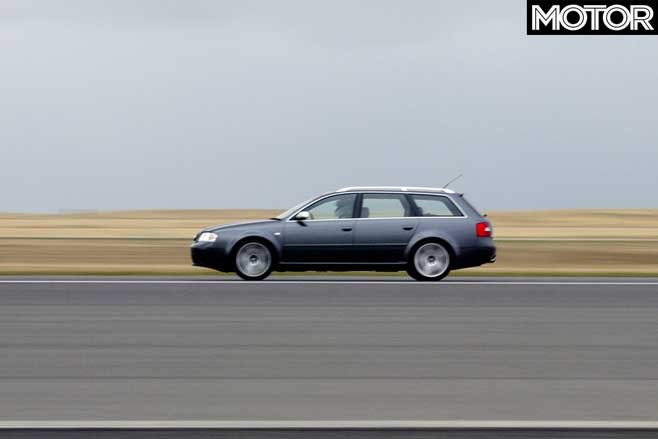 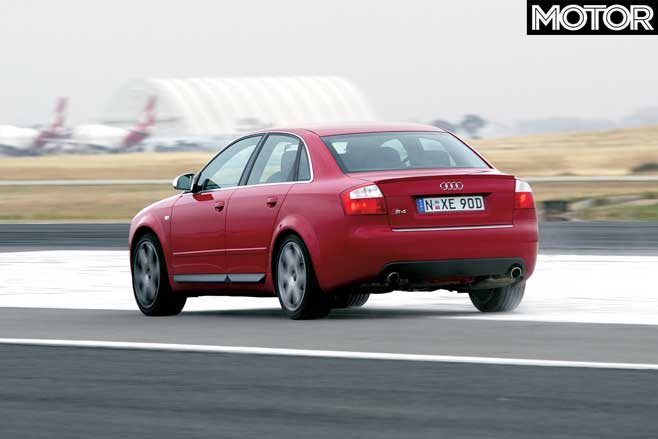 Neither Audi is particularly lithe, but the S4’s 1660kg is no real barrier to performance thanks to 253 very flexible kilowatts and 410Nm. Nought to 100 comes up in 6.26 and the 400m is gone in 14.38, with a terminal velocity just over the pre-metric ton. Continues to pull hard across the kay and rock solid on the run to its 261km/h top whack. 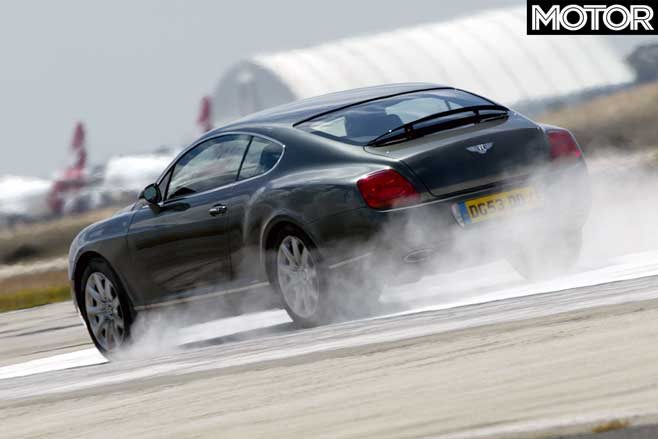 Okay, so it’s 2.4 tonnes… that’s bad. But it also has a twin-turbo 12-cylinder engine with 650Nm, so that’s good. Good enough to fling it to 100 in just about six seconds flat and across the quarter in under 14.

Slower off the mark it may be, but across a kilometre it caught the hell up with a time of 24.58 and a terminal speed of 225.9km/h. From seventh to 100, it charged to the fifth fastest trap speed after 400 metres, then was, incredibly, the second fastest car at the 1km mark.

Four hundred and eleven kilowatts can pretty much fix anything. The Bentley was another big hitter, with 280km/h making light (literally) of its kerb mass. The top-end spurt in the Bentley was the really amazing bit – it just never quit. 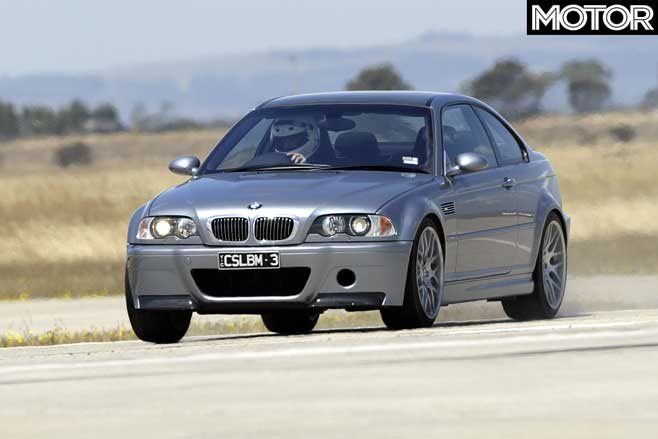 Suddenly, we’re down to the exotica and some big reputations are seriously on the line. With its launch control and the SMG gearbox moved from ‘stun’ to ‘kill’, the M3 CSL was always going to give things a big shake. And a 5.15 to 100 and 13.40 at 174.1km/h is the business. 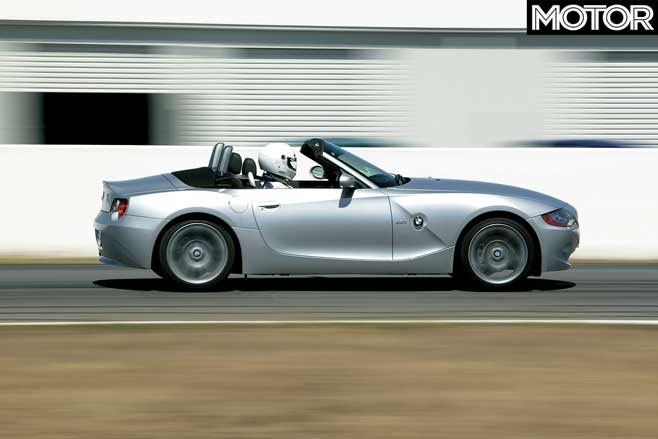 We’ve run about four-tenths quicker to 100 on a previous test, but the 14.9sec 0-400m time is about on the money at just a tick slower than our best. Disappointingly, the Z4 was one of only five cars not to crack 200km/h by the kay marker, but the Z4’s 241km/h seemed pretty handy given the compromised aerodynamics inherent in any soft-top. 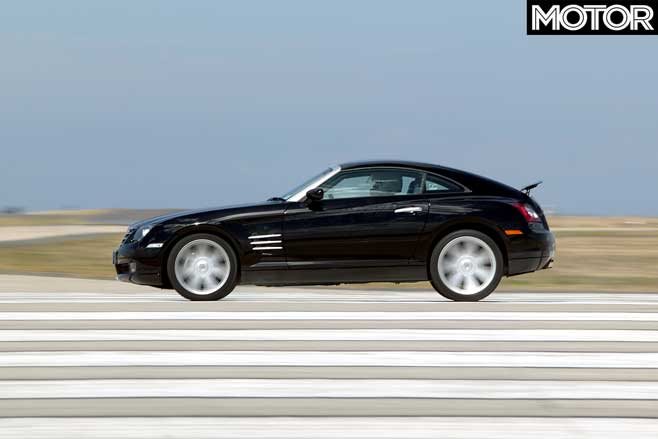 Avalon established the pecking order for the latest rear-drive, mid-sized coupes and convertibles. The Chrysler Crossfire was the slowest to 100 (7.27) and was also the only one of the four (350Z, Z4 and RX-8) that couldn’t get under 15 seconds over the standing 400m, although it was damned close at 15.07.

Top end was also slowest with a disappointing 233km/h (just pipping the Astra by a single kay). Only a slightly wandery rear end under hard brakes at the end of things spoiled the fun in the Chrysler. 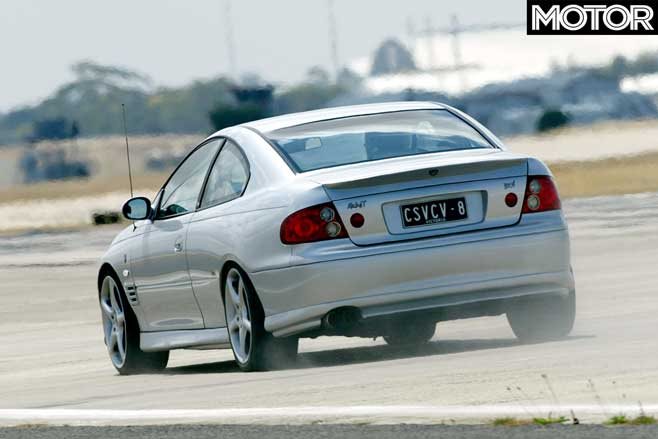 The Mondo GT was blisteringly quick down the top speed chute, especially since it doesn’t have the Lambo’s aero package, and it gets worryingly skittish over 270-odd (we’re assuming – the speedo goes to 220).

Still, it’s the fastest Australian-manufactured car we’ve ever tested, so cop that and two fingers to the Big Boys. And let me tell you, at 282km/h, you’re mighty glad CSV went to the trouble of the huge brake package it wears. 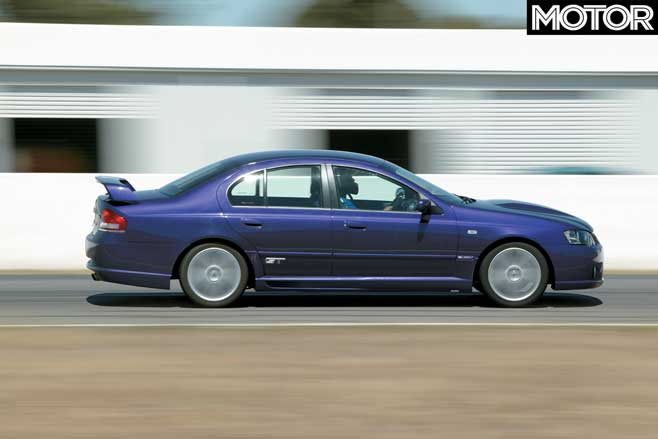 Wow! Big top end for a Falcon. These things are supposed to be limited to 230, but this big boy just powered on to 254km/h. Ran straight and true and had no problem with the big stop at the end of the runway. Couldn’t match the HSV on the drag strip but managed to pip the lighter Holden Commodore SS. And it sounded better than both of them, howling like buggery under full load in fourth and fifth. 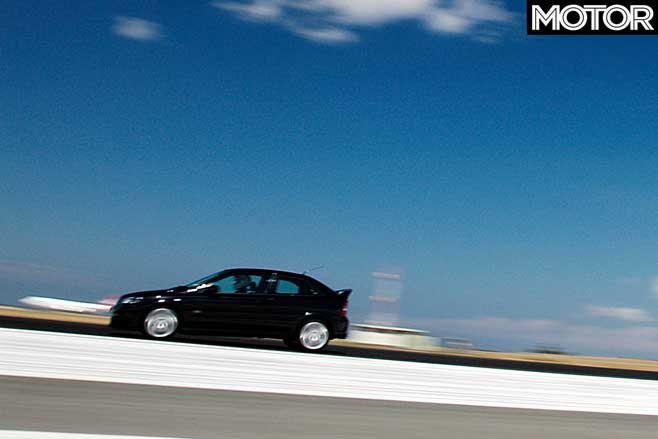 With the least power and worst weight-to-power ratio of the field, it’s no real surprise to see the little huffer-stuffed Astra at the bottom of the speed charts. It might be down on pace from the big boys, but the 147kW hatch posts solid acceleration numbers for its ilk. And 232 kays is not messing around, either, sitting pretty with both the Liberty and the Crossfire. The steering’s starting to get light at that speed, and it could do with some more in the braking department when the end of the runway is rushing up. 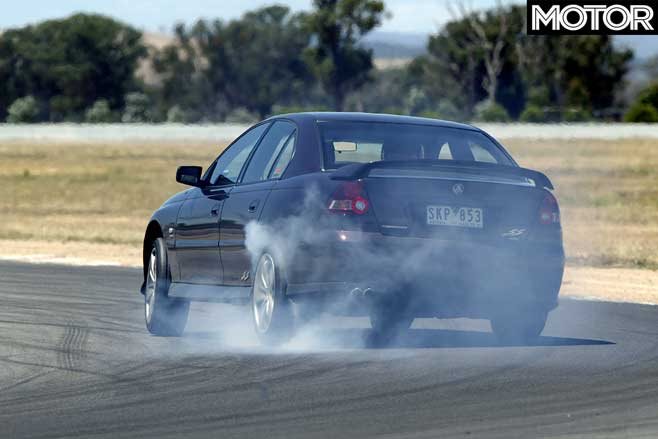 Not bad for a big family hack. And remember, the SS is the second cheapest car in the field at a whisker under $50k. It’s a battle of the six-speed ’box on the acceleration strip, but a mid-six to 100 kays and a mid-14 is pretty sharp, even though conditions took more out of the rear-drivers than others. Given the SS’s brakes, which felt like they were underdone, 251 was really as fast as you’d want to go. 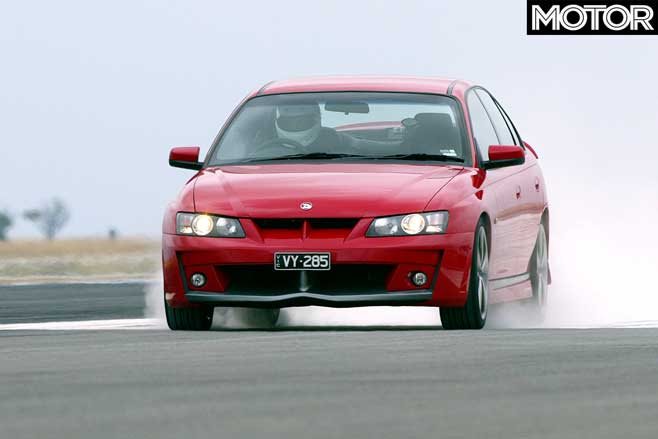 Predictably, the ClubSport R8 was quicker than the Commodore SS and Falcon GT with a 0-100 time in the fives (5.92, to be precise) and a 400m time of 14.08. No match for the CSV in acceleration or top speed, it bested it for stability at extreme pace.

The Clubbie still impressed with 260km/h (up six klicks on the FPV), although that’s about 15 kays down on the (shorter geared) GTS sedan from last year. Most stable of the local sedans under brakes when the fence started to look big. 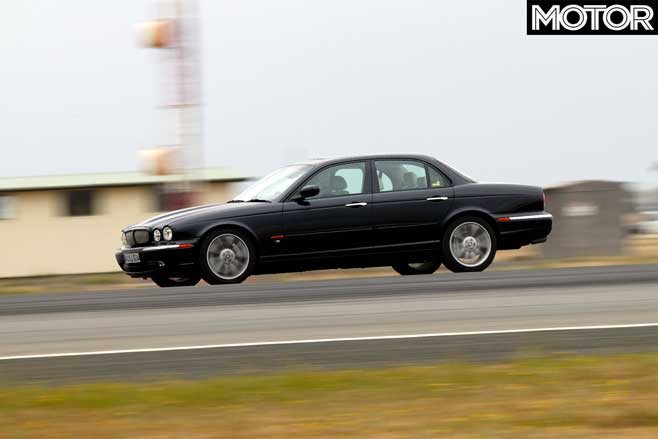 Like Jaguars past, the XJR was nibbling on its limiter at 251km/h just before the radar and felt like there was still a bit in reserve. Brakes are still not a strong suit, but the XJR displayed way more stability than last year’s XKR. 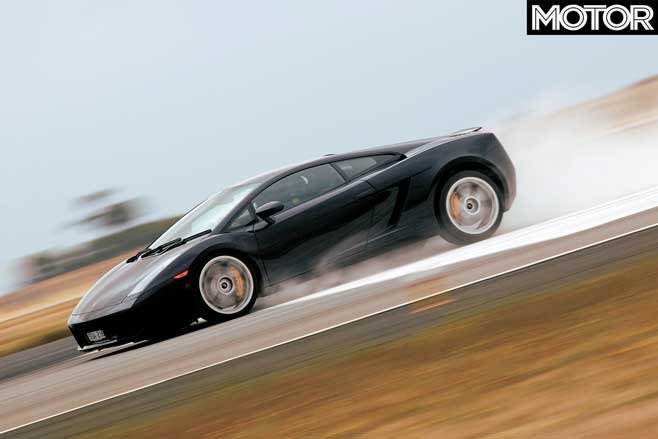 Like the CSL, the Lamborghini Gallardo was similarly burdened by its own reputation, but also acquitted itself well with a marginally slower 0-100 time than the Bimmer – 5.5 – but an ever so slightly quicker time for the 400m with a 13.36 at 179.7.

If you think that 5.5sec 0-100 is a bit off the pace, you’re dead right. There’s probably another second or so in the car, but the high-grip surface at Avalon makes launching an all-wheel drive next to impossible. This early on in the event, we felt discretion was the better part of valour.

Only fourth to 100 kays, then, the Gallardo mowed them all down with disdain once it got rolling, fastest at every other increment. It’s the same in all-time PCOTY reckoning – it had the 10th fastest 400m run we’ve ever done (even with the dainty launch), but the fourth fastest trap speed behind Porsche’s 911 Turbo and GT2, and the Viper.

The real difference, however, was across the standing kilometre, where the Lambo’s top-end rush and slicker aerodynamics allowed it to post a time of 23.57 at a stunning 236.6km/h. That’s more than a second and 10 kays quicker than the Viper from last year, but the Lambo storms onto a similar top speed, meaning it has serious acceleration in fifth and sixth gears.

On the runway, the Lambo was king of the hill with a best of 292km/h and still running hard in sixth. Given room, the Gallardo’s a genuine 300km/h car. And of all the cars, it was the only one you’d confidently move the braking maker back another 100 metres or more – even with its higher top speed! 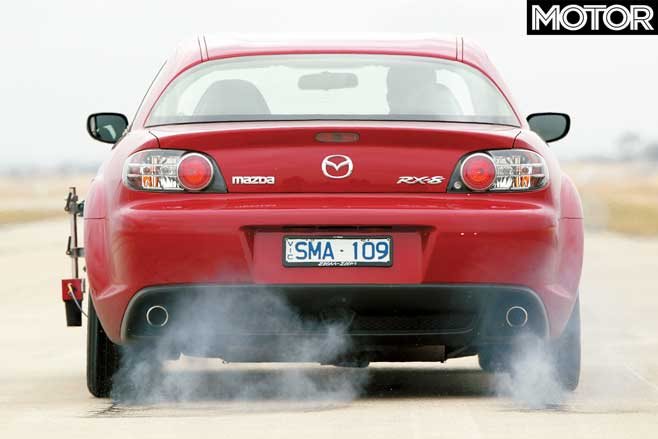 Quickest RX-8 times we’ve run by a good half second. No doubt helped by the sweet gearchange, which is only ever a wristy jab away from the next ratio. The RX-8’s 235 seemed a bit disappointing, more so when compared with the Zed’s 251 and the 250 clocked by the Volvo. By then it had genuinely run out of puff and was struggling to push the air. 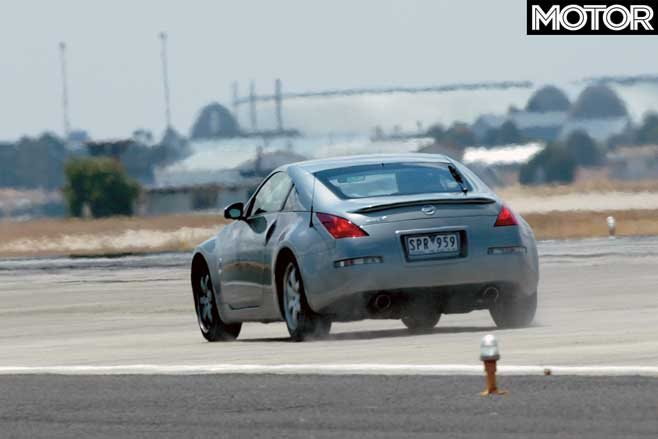 Very strong performance from the Zed. Sure, it drops a tenth to the Mazda on the run to 100km/h, but it’s hauling it in by the 400m mark with a higher terminal speed. Continues to bully both the Crossfire and the RX-8 over the standing kay and pushes on to a solid 251km/h top whack – and it’s still gathering pace. Big Brembos do the stopping with ease. 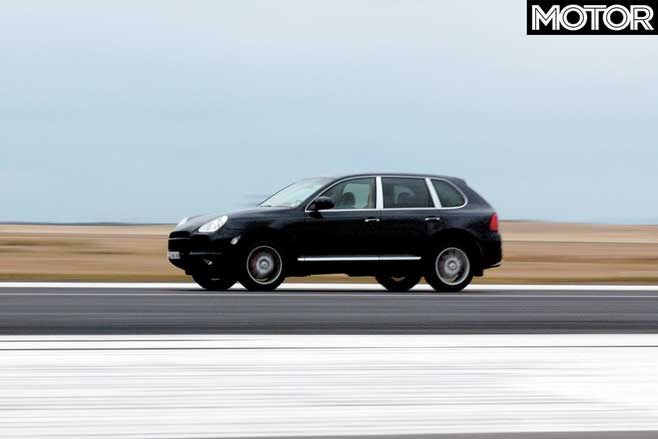 While it doesn’t especially look like a performance tool, with a twin-turbo V8 and 331kW at its disposal, the Porsche Cayenne Turbo sure as hell goes like one in a straight line. The first 100km/h came up in 6.48 and the 400m dash takes 14.49. On the runway the Cayenne managed 250km/h neat, which, considering its frontal area, is a bit like ramping a council dunny block up to Mach 3. 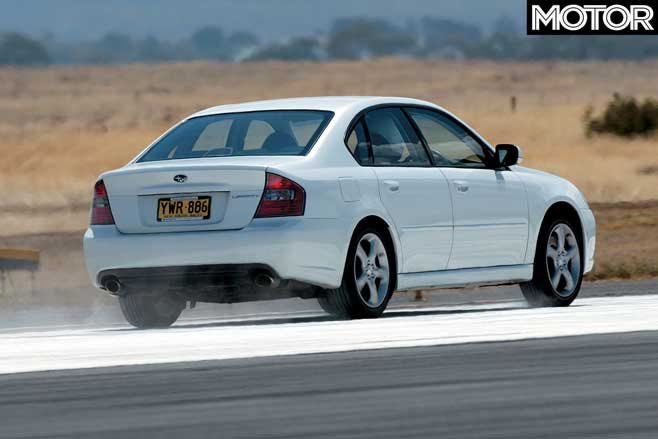 Next year we’ll have some locally made all-paw monsters (did someone say Coupe4?) to run at PCOTY, but this time around all the four-wheel drives were imports. And with no WRX, STi or EVO Lancer this time around, the competition was wide, wide open. 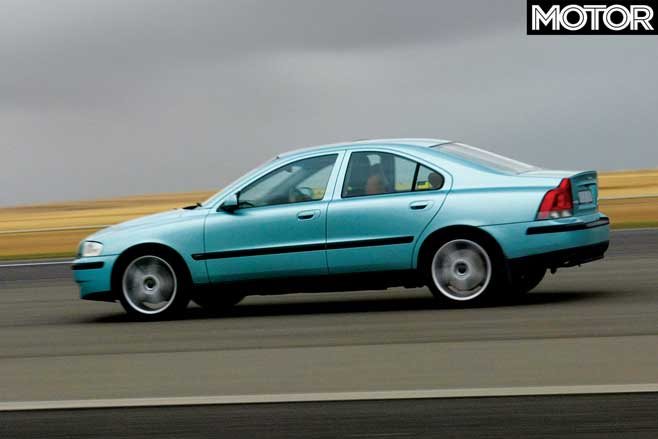 The big Volvo S60 R feels pretty toey on the road, so its 6.38 and 14.58 were no real surprise. But along with the Lambo, the Volvo was the hardest car to launch. Various techniques and launch revs were tried, but the Ovlov wanted none of it, bogging down on each run.

Once again, it really hits its straps a bit further down the road, and its standing kay terminal speed of 204 neat suggests its portly 1700-plus weighbridge ticket hinders it a little at first. Pulled a solid 250km/h on the nose, but the last five or so kays were a bit of a struggle. 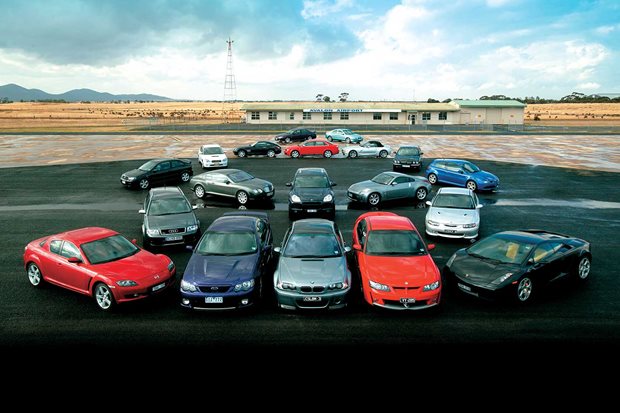 Take the phone off the hook, and get ready to meet the 19 hotties from 2004 that we reckoned are genuine PCOTY contenders, plus the weirdos who judged them 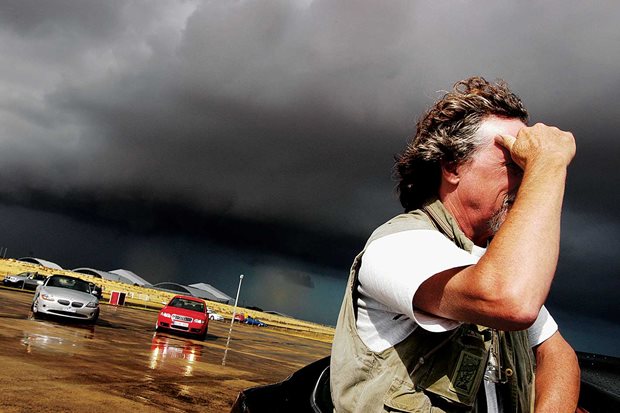 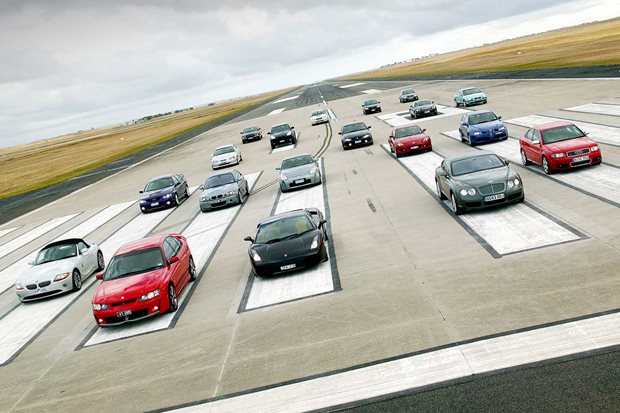 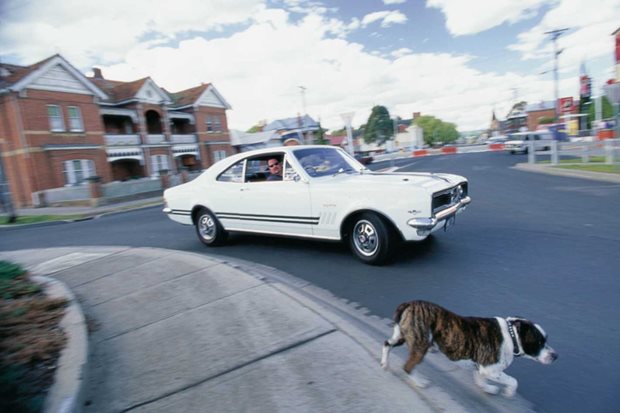