AFTER another restful night at the Birdsville Hotel we were packed, loaded up and heading out of town at 8.47am. It had rained a little that evening and the cloudy sky again looked threatening, but we had been assured that the Birdsville Track was open, albeit quite boggy for the first 30km or so heading south out of town.

And boggy it was! The track was already very chopped up and we found ourselves slipping and sliding along for an hour at about 30km/h, all crossed up in sections and struggling for traction. David Cox called on the UHF to tell us he was pulling over to clear the mud from under the trailer’s guards.

It had become so chocked up that the wheels had stopped turning! We took the opportunity to brew a coffee and have morning tea, but by the time Dave caught up with us and we were ready to get going it was after 11am and we hadn’t even covered 50km of the 315km drive to Mungerannie. 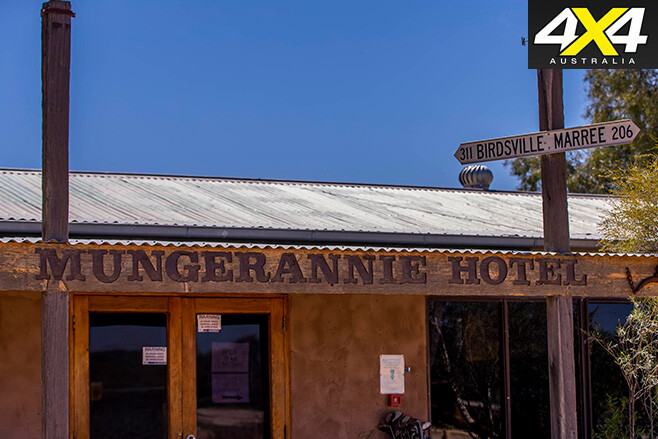 Fortunately the worst of the mud was now behind us and we upped the pace as the road dried out. We pulled up for lunch at around 1pm but had to pack up quickly when it started to bucket down with rain once again. As we continued south the rain eased and eventually stopped altogether. The clouds even started to break up and by the time we arrived at Mungerannie the sun was shining.

My heart missed a beat when I saw the road sign near the entrance to the Mungerannie Hotel: “Birdsville Track – Mungerannie to Marree: Closed”. Could we be stuck here for the next week or so?

Phil at the Mungerannie Hotel assured us that the remotely operated road sign was faulty and that, in fact, the Birdsville Track was definitely open. We picked out a campsite, rolled out our swags and then headed back up the track a few kays to grab some sunset shots of the Off Road Icons. After another of Vicki’s fantastic meals, we headed across to the pub for what turned out to be a bloody big night; I reckon it was about 1.30am when the last of us pulled up stumps. 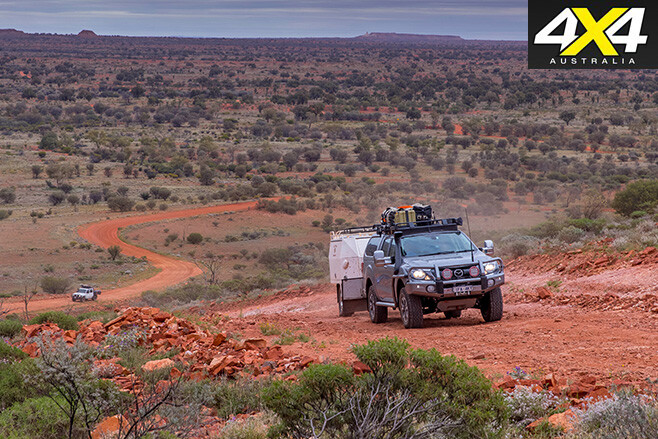 The following morning, while Fred, Wes and Patrick attempted to get Phil’s old Defender 110 going (it had lay dormant for two years), Mark and Dave removed the GQ Patrol’s alternator and pulled it apart in an attempt to clear it of mud and get it working again. While the alternator repair wasn’t successful, the old Landy was soon going, and Patrick proudly showed it off to anyone who would pay attention.

BANG!
IT WAS 11am by the time we were back on the track and heading south to Marree under a sunny sky. I was travelling with Wang Qing in the 40 Series and, as his English was almost as limited as my Chinese, communicating was quite difficult. But we were having fun, and as we couldn’t hear the radio anyway, we start singing. It was a surreal experience: singing Disney tunes with a Chinese bloke while driving down the Birdsville Track in a 40-year-old LandCruiser. We had a quick lunch stop where the track intersects the Cooper Creek and then fuelled up in Marree at around 4.30pm. So far the day had gone swimmingly: the sun had been out, the track was relatively dry and we hadn’t had any mechanical issues.

Bang! Just after we had passed Farina Ruins, the 79 Series LandCruiser’s onside rear wheel departed company from the vehicle. Suffice to say, Patrick, who was travelling in the 79 with Mark, was quite startled. As they got out of the vehicle to see what was going on, a couple of local blokes pulled up and told Patrick that they saw the wheel go “running across that paddock like an emu”. All of the wheel studs had broken clean off. 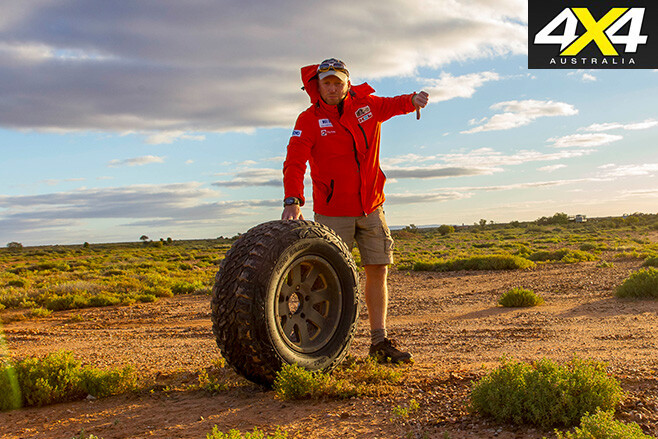 It was just after 6pm and the sun was setting. A still-faulty alternator in the GQ Patrol meant its headlights wouldn’t last long, so it was decided the bulk of the convoy should push on to Parachilna while Dave and Vicki in the tucker truck would wait with Mark Lowry for a flat-bed, which would haul the stricken Cruiser into Copley for repair. As we sipped on our first beers at the Prairie Hotel at around 8.30pm, the Cruiser was already being towed to Copley, where the resident mechanic just happened to have a bucket-full of new LandCruiser wheel studs in his workshop. The repair was made in no time and Vicki, Dave and Mark were soon with us in Parachilna. What had at first seemed like a potentially trip-altering event was now but a distant memory.

SPECTACULAR SKYTREK
IN ORDER to comfortably complete the spectacular 80km Skytrek loop on Willow Springs Station, you need to be ready to roll no later than 10.30am. As usual, we were running a little behind schedule, but we were confident we could make up the required time… so long as we didn’t encounter any more mechanical issues. We were only 16km into the loop when we pulled up for lunch at Old Moxan’s Hut, which was built around the turn of the last century and permanently occupied by a station employee until the early 1960s; this small and basic hut was restored by the Nissan Patrol Club in 1993.

It was here that Michael Ellem poked his head under the Ford Ranger camera car in search of a strange noise; instead he noticed a big tear in a CV boot, which had been caused when one of the swaybar links had gone awry and the swaybar itself was contacting the boot.

Before you could say “fixing cars again”, the Hi-Lift jack was out, the Ranger had been secured, and four or five blokes started pulling things apart in order to remove the swaybar altogether. An hour later the job had been done, we had finished lunch and were back on track. The Skytrek loop borders the Bunkers Conservation Reserve and it offers four-wheel drivers a great mix of terrain, travelling through gullies, across paddocks and up and over steep rocky tracks that offer impressive views of the property. Two of the highest points, Prominent Hill Lookout (704m above sea level) and Upalinna Lookout (747m above sea level) provide 360-degree views of the surrounding Flinders Ranges.

As it was nearing dusk, Wes Siler volunteered to forge on ahead in the GQ Patrol to try and get back to Parachilna before sunset, as the alternator was still buggered and the headlights wouldn’t last long. The other three Off Road Icons were set up atop Willow Springs Homestead Lookout for more sunset photography. It was about this time that the Defender’s rebuilt 300Tdi engine started to run rough and eventually stall. Oh dear, to come all this way and falter at the end of the trip.

While I blew the dust out of the air filter, Landy owner Sam Purcell slipped under the back of the Defender and drained the fuel/oil separator. Considering the trip we’d experienced so far, it was not surprising that there was water in the fuel. The Defender was once again running like a new one and, with the rest of the crew, we carefully drove back towards Parachilna, keeping a close eye out for wildlife. The final day in the Off Road Icons was a big one (505km) but compared to most of the other days on this trip it was relatively uneventful. Rather than just head down to Peterborough and then up the Barrier Highway to Broken Hill, Michael Ellem planned a route that would see us fuel up at Hawker and then turn off at Craddock, heading northeast along twisting and picturesque dirt roads and then southeast to Waukaringa Ruins, where we would have lunch at a very reasonable 1.40pm.

After lunch we drove up a hill that gave us a great view of the old Waukaringa Goldfield and Michael spent some time capturing the final images of the trip. From here it was only 20km down to the Barrier Highway for the final 200km blacktop run into Broken Hill and a farewell dinner at a pizza joint in town.

We had all been afforded the opportunity to partake in a once-in-a-lifetime experience, driving four old 4WDs across the Simpson Desert and, as luck would have it, through the Flinders Ranges. Sure, there had been a raft of mechanical problems along the way, and the weather most certainly wasn’t on our side, but it was these challenges that combined to make what could have been a relatively easy trip into an unforgettable adventure. The fact we were travelling with a fantastic crew of people was the icing on the mud cake.

After two weeks driving the ARB Off Road Icons through Australia’s Red Centre, everyone grew to love the vehicles. Here are some of their individual thoughts.

Chris Collard: Overland Journal, USA
“If I was able to import one of the cars you’ve got down here it would probably be the Patrol, the diesel Patrol. In the United States it’s kind of iconic, and it’s kind of an anomaly because we’ve just never had that vehicle, so I’d love a Patrol. It’s solid, easy to drive and comfortable.”

Fred Williams, Petersen’s Four Wheeler Network, USA
“The Defender is the one vehicle that I would drive anywhere. The thing rides good, it’s got plenty of power (not too much), the suspension is dialed, the torque of the engine is great and it just looks right for crossing any desert in the world.”

Patrick Cruywagen, Land Rover Monthly and Leisure Wheels, South Africa
“The Defender… unstoppable. Everyone loved teasing it at the beginning but it proved itself, especially when it pulled the food truck out. And also the 40.”

Wes Siler, Outside, USA
“The Hilux is brilliant. It’s my favourite car here. It just gets up and goes; it gets through anything. It’s just a happy little car, easy and smooth and fun to drive.”

Sam Purcell, Unsealed 4x4, Australia
“The Patrol. What a beast. It’s pretty unstoppable really and you can see why it’s such a popular choice for four-wheel drivers in Australia.”

Matt Glass, ARB, USA
“The Patrol is an absolute tank. It just carried so much weight and has such a great centre of balance… the handling has been phenomenal.”

Mark Lowry, ARB, Australia
“The Hilux is probably my favourite of all the vehicles because I owned one exactly the same. It was a very reliable vehicle for myself when I owned mine and this one has proven to be exactly the same; nothing has gone wrong with it.”

Sam Boden, ARB, Australia
“The 40 Series… probably the most iconic looking of all the vehicles. It didn’t do much wrong. It had a slight electrical issue which forced us to tow it some 200km out of the desert, but from a rawness point of view you couldn’t get much more than the 40.”

David Cox, ex-Mt Dare Hotel, Australia
“The Defender. Look, Land Rovers are not my favourite, that’s no secret, but that thing is just awesome. It plows along, it chugs along with virtually no trouble – apart from a little fuel/water issue – and it just sailed through everything with relative ease.”