You really don’t expect to turn up to a campground that has been recently deluged with rain to the extent that the 4X4 tracks have been wiped out.

You especially don’t expect the walking tracks to become, almost, very long lap pools. But hey, if you’ve got this far, you may as well enjoy the experience! We knew too well there’d been rain recently, but still figured the stopover in Bundjalung National Park, just south of Ballina, would be worth a couple of days; we could cope with keeping the transfer case stick in the 2WD position – there’s more to getting out and about than just the 4X4ing, eh!

The ocean was as rough as guts with high seas, choppy white water and rather daunting reminders of how powerful nature can be with massive tree trunks washed ashore. The freshwater run-off turned the ocean (almost) the same tea-coloured hue as the inland freshwater lakes that the area is well known for, so there was no point throwing in a line or attempting to swim offshore – just not worth the risk!

MORE How to be safe around Australian waterways 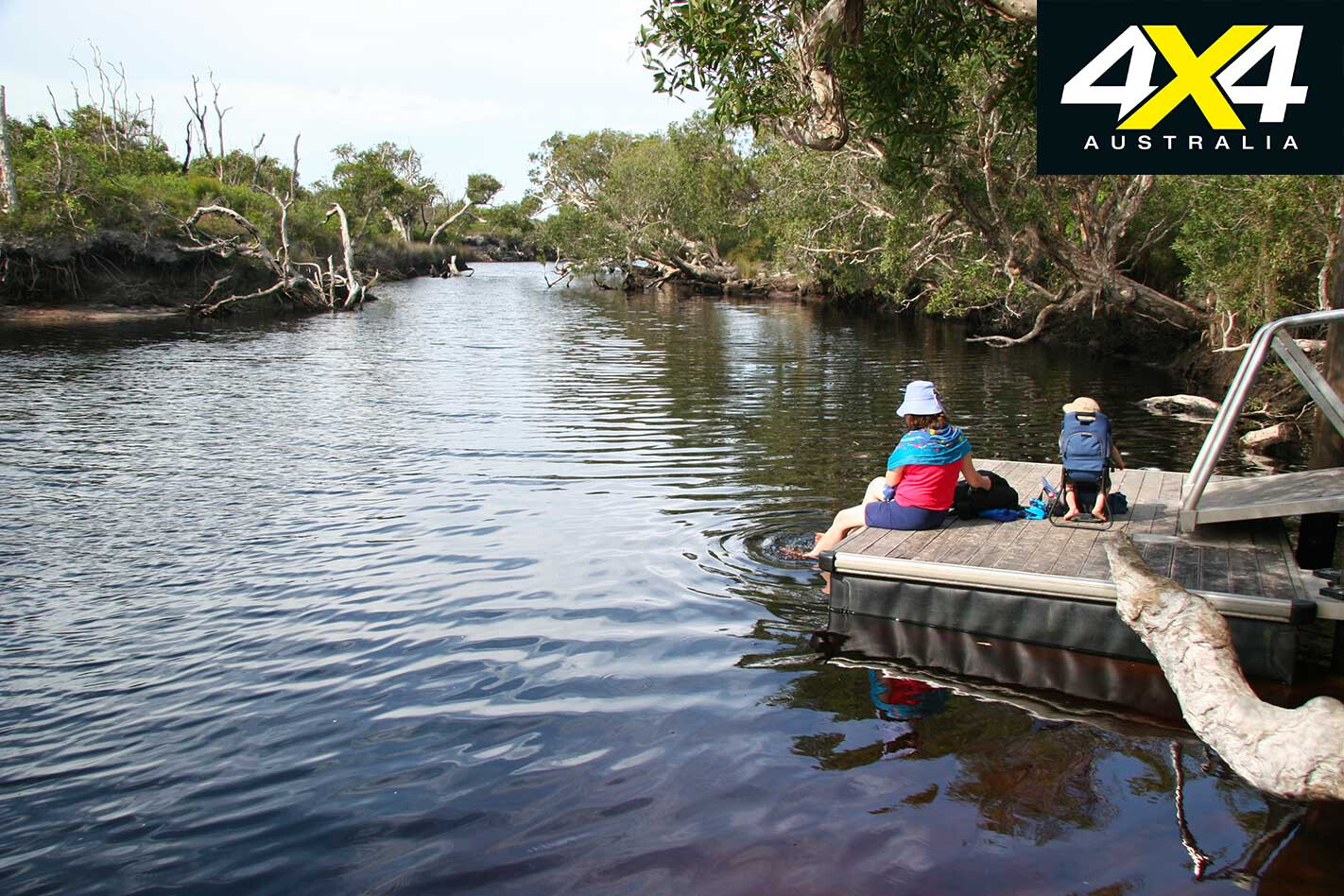 Oh, and if you’ve got little kids, this creek makes for a tops place to teach them to swim.

Supposedly, there are rare coastal emus on the aptly-named Emu Loop walk but instead we spotted well-fed goannas and giant man-eating bull ants, as well as the expected paperbark (melaleuca) trees within the swampy areas that line the creek banks.

The well-preserved wartime bunker is a remnant of target practice, where the Royal Australian Air Force trained before being sent overseas to battle. One can only assume that they dropped live bombs in the area, but without an enemy shooting back. That shelter would have been ideal had we been there during the thick of the downpour! At the far end of the Emu Loop walk, continuing along the creek, you’ll spot a multitude of wing-flapping, feather-breasted friends that we had no idea of the type… except knowing they were definitely not the elusive coastal emu! Birdwatchers will love the place, where supposedly many varieties migrate to roost, breed and rest before their long flight home. Perhaps those emus had flown the coop!

At the end of this walk, you have the option of returning along the (normally) sandy beach or backtracking among all those birds. As much of the coast had been washed away, exposing tall cliffs of unstable crumbling Coffee rock, we retreated the safe way and went in search for more (well, any) damn emus!

There’s a floating pontoon on the creek that makes a brilliant spot for lunch and impromptu swimming lessons for toddlers. It was my saving grace as I’d been boasting to all about the sand driving, surfing and … emu spotting we’d be doing!

That pontoon became our resting place for many hours, plus return visits the next day with dangling feet, duck diving, dog paddling, exploration and tall-story-telling keeping our family giggling and wondering who’d spilt all the tea into the tannin-coloured water. At other times, when the weather is kinder, you are permitted to drive onto Ten Mile Beach (to the south) between Shark Bay and Black Rocks camping area, which is a small section of a 17,000ha hidden stretch of heathlands with pockets of rainforest, lagoons and coastal beauty. The northern extremes of the park end at the southern banks of the Evans River, over which is the township of Evans Head.

If you’ve got a canoe, be sure to take it as there is plenty to explore among the inland waterways. There are other places within this park to spend time: the day-use areas up near Evans Head, which is a good spot for whale watching atop the cliffs (during the season), and the campground down south at Woody Head offers better amenities and is easily accessible by caravans. However, if it’s the freshwater access you want, Black Rocks camping area is the place to be.

Storm damaged or not, emus or not, Bundjalung NP definitely worth a short stopover to ponder life away from the hustle and bustle. 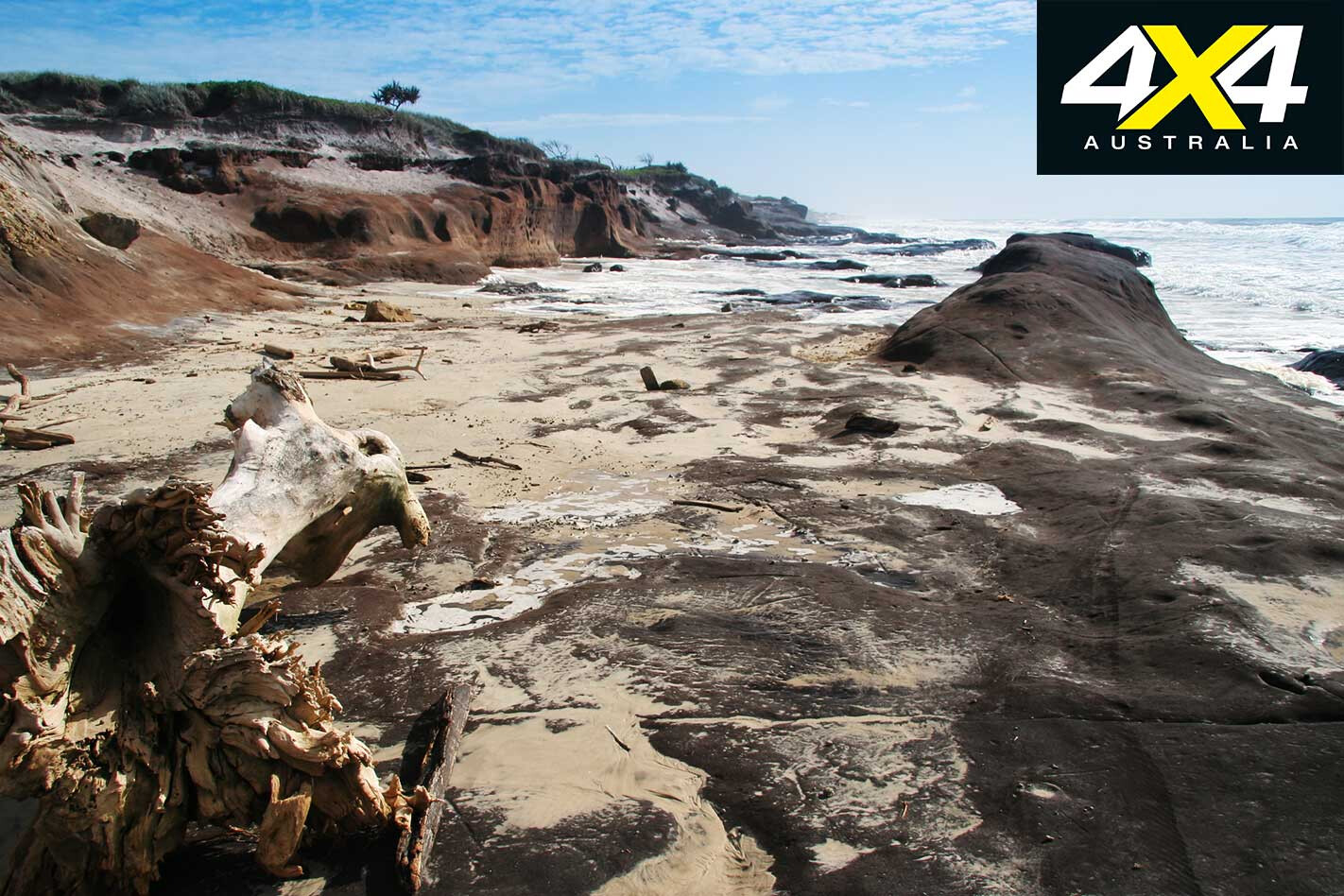 GETTING THERE
Heading north from Sydney, just after the turn-off to Yamba, is Iluka Road to the east that takes you to the southern end of the national park. Access to Black Rocks campground is further north on the Pacific Highway, at The Gaps Road, which winds its way back south for about 15km south to the coast at Jerusalem Creek and the camp spots.

WHEN TO GO
Access is year round, but some activities are weather dependent. FOUR-WHEEL DRIVING
There’s little four-wheel driving in this park except for one section of the beach, but do check for storm damage which closes the beach to traffic. As of June, the access point at Black Rocks campground is closed due to storm damage. Vehicle beach access is only at Shark Bay to the south.

FACILITIES
Self registration for camping at Black Rocks, which offers pit toilets and sites for tents, camper trailers and vans. BYO water and firewood; first-in, first-served for campsites.

SUPPLIES
Evans Head (at the northern end of the park), Iluka (at the south), and Ballina provide all you could wish for food and drink-wise.