ALONG the Stuart Highway south of Alice Springs, roadside rest areas quickly fill with travellers during the peak touring season. The throng starts assembling at mid-afternoon and, though the outlook might not be the most inspiring, the cost is free and the company guaranteed.

A handful of savvy travellers know where to nip off the bitumen, to a little-known free camp that has some clear benefits over the highway stops. At Redbank Waterhole, in Owen Springs Reserve, there’s not much in the way of traffic noise and there’s plenty of room to move.

A dirt track leaves the highway 66km south of Alice, heading west just 6km through the reserve to Redbank Waterhole. The track is marked 4WD-only and, though dusty and corrugated, is hardly a challenge for any vehicle with a bit of clearance. 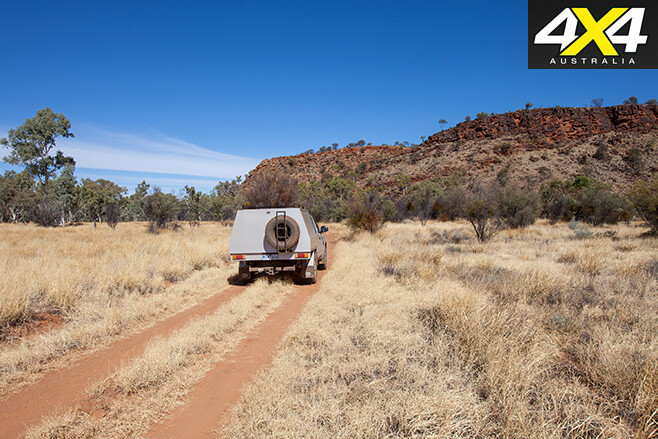 There are no facilities at Redbank; only the tracks and old campfires of previous campers define individual sites. Most sites overlook the bed of the Hugh River, one of the Territory’s great ephemeral rivers and a main tributary of the mighty Finke. Naturally, some of the tracks around camp are fairly sandy, as are the sites. Another advantage of Redbank is that it’s one of the few reserves in the Territory where dogs are allowed.

This section of the reserve isn’t that far off the main road, so there can be a drift of noise from road trains rumbling along the highway. The sound isn’t intrusive, though, and it’s the local corellas and red-tailed black cockatoos that cause the most commotion.

Quiet campers have a fair chance of seeing more wildlife at Redbank. Along with the corellas and cockatoos, the waterhole attracts flocks of budgerigars, different pigeons and even hawks that harass fish attempting to hide in the diminishing pools. 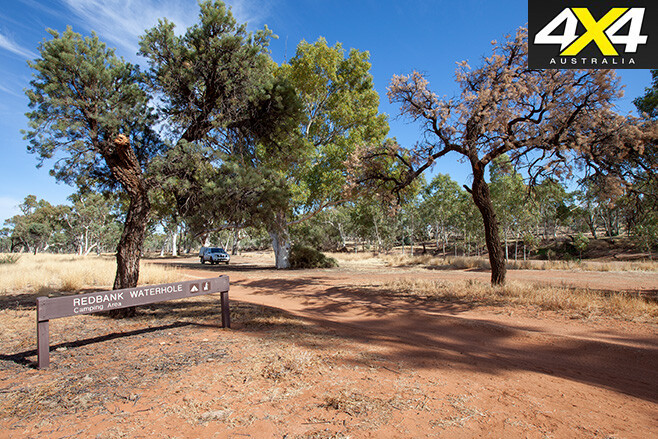 Water levels will depend on how recently the Hugh River has seen a flow, and in a good season there’ll be enough water for a refreshing warm-weather swim. It’s an attractive place, lined with river gums and surrounded with a variety of grasses and shrubs.

However, Redbank is just a small section of Owen Springs Reserve, and travellers looking for something more than just a convenient overnight stop won’t be disappointed.

From the Redbank Waterhole access track, a self-drive route leads roughly north towards the Waterhouse Range. This track is definitely for four-wheel drive vehicles only, as it picks up the bed of the Hugh River to traverse deep sand as well as rocks and dust. Despite that, it’s not a terribly tough track and the camping opportunities are pretty good. Unfortunately, pets are not allowed in this section of the Owen Springs Reserve. 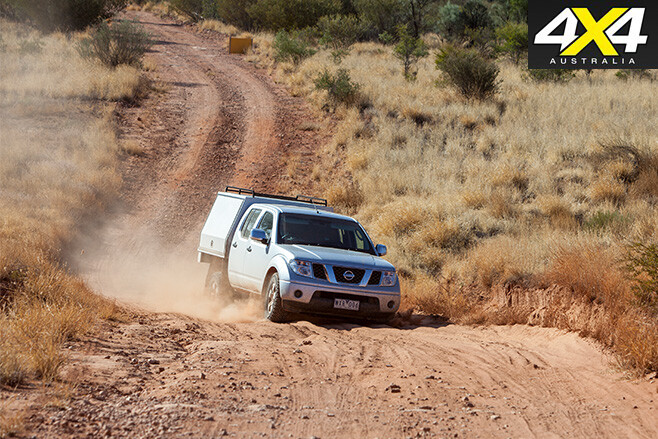 The self-drive route is only 50km long, ending on Larapinta Drive about 50km west of Alice Springs.

A brochure detailing historical and natural points of interest along the way is usually available at the entrance to the reserve. An information sheet can also be downloaded from the Northern Territory Parks and Wildlife’s website.

The going is pretty slow along this self-drive route, which is a good thing, as it allows travellers to enjoy the changing sceneries. With the ranges still in the distance, the track winds through grasslands and over a few low red dunes where spinifex is interspersed with a diversity of shrubs and herbage. On occasion, parts of the track can be eroded by heavy rainfall, but it seems the park’s staff keeps signage up-to-date to provide adequate warning of any damage. 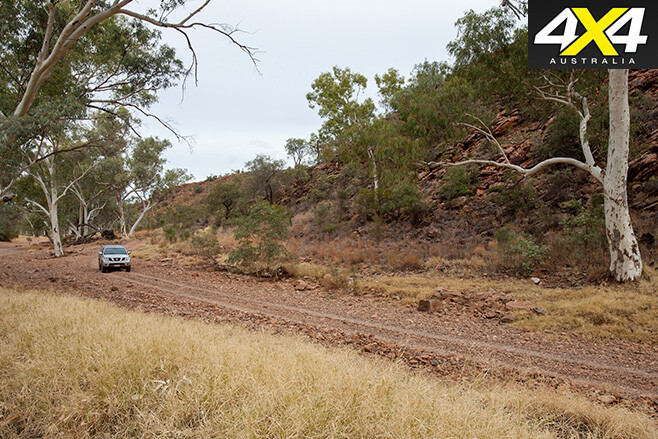 The landscape gradually transforms to undulating hills, which in turn morph into the Waterhouse Range. From here, the track follows the course of the Hugh River as its cuts its way along Lawrence Gorge and through the range. Lower tyre pressures are necessary for the deep sand in this part of the reserve, though there’s a fair share of narrow, rock-studded sections as well.

This is a pretty part of the world. Low rock forms of different shapes and colours have a definite ‘Central Australian’ ambience, and gnarled river gums show their age with wide girths and contorted branches. In the gorge, signs mark a 5.6km stretch where campers can set up.

There are no designated sites within that distance, though a few rough tracks lead to clear areas or massive sandbanks pushed up when the Hugh is in flood. It’s a matter of camping wherever you like! With such a massive choice of camps, it’d be rare to be crowded in this part of Owen Springs, so it’s a good opportunity to sit back and enjoy a remote experience. The chances of spotting wildlife are also good, though sightings of elusive black-footed wallabies or euros aren’t guaranteed. Campers are more likely to hear the howl of dingos echo through the range.

The Waterhouse Range is said to hide evidence that Aboriginal people have lived in and roamed this area for countless lifetimes. NT Parks asks that travellers respect the wishes of Aboriginal custodians and not climb these hills. More recent history, from when Owen Springs was a cattle station, is much easier to recognise, especially at Haunted Tree Bore and the historic homestead ruins. The old homestead is among the first to be built in the Northern Territory and, though much of the complex has disappeared, restorations have put a bit of life back into the main building.

Owen Springs’ history is entwined with explorations of the Overland Telegraph Line, and John McDouall Stuart was the first white man to visit the area. Interestingly, the waterhole named as Owen Springs isn’t permanent, but another ephemeral waterhole of the Hugh. 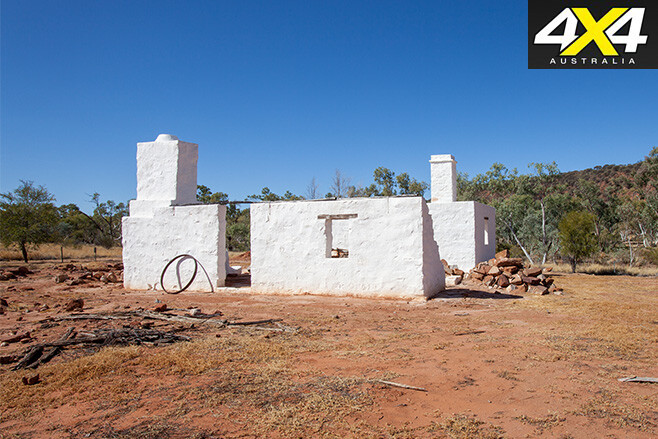 Between the highway-handy camp at Redbank and the strung-out bush camps at Lawrence Gorge, Owen Springs is a great place to explore.

The reserve offers the chance to see a different part of Central Australia, and a part that it seems the multitudes are yet to discover.

OWEN Springs Reserve is south-west of Alice Springs in the Northern Territory. Access is from the Stuart Highway, 66km south of Alice; or from Larapinta Drive, 55km west of Alice.

4WD vehicles are recommended, especially for the self-drive route along the Hugh River. Access tracks to the reserve are likely to be closed after rain. Pets are allowed at the Redbank Waterhole section of the reserve, but not along the self-drive route.

Camping is at Redbank Waterhole and along a 5.6km stretch at Lawrence Gorge. Camping is free at both locations.

There are no facilities at Owen Springs Reserve. Travellers should be self-sufficient and take all rubbish away with them.