It's a long way from anywhere, but South Australia's Coongie Lakes is worth a trek.

Even in near 40-degree heat, the view as I popped up over a small dune was one of the most refreshing I’d ever seen: an expanse of minty-green lake, edged with lush reeds, was absolutely teeming with birdlife.

After nearly three weeks of nothing but dust and desert, seeing the lake was glorious. 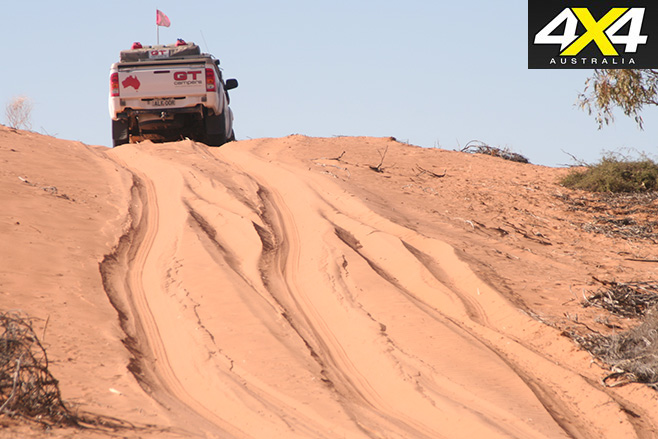 Stepping out of the Hilux, I saw something move – toward tussocks of grass by the edge of the lake, a dingo trotted warily over the rich-red desert sand, which swirled like ice-cream, with whiter alluvial dirt. Seconds later, I spied a pair of emu bobbing along the dune I’d just traversed. It was easy to see that Coongie Lakes is a remarkable place.

You can be excused for not having heard of the place, despite it being part of the same inland river system as one of Australia’s most noteworthy waterways, the Cooper Creek. Maybe that relative anonymity is a good thing, because Coongie Lakes’ isolation – smack-bang in the middle of Burke and Wills country in the far north-west of South Australia – means it’s too far to travel for the weekend wallies wanting to conquer tough tracks. 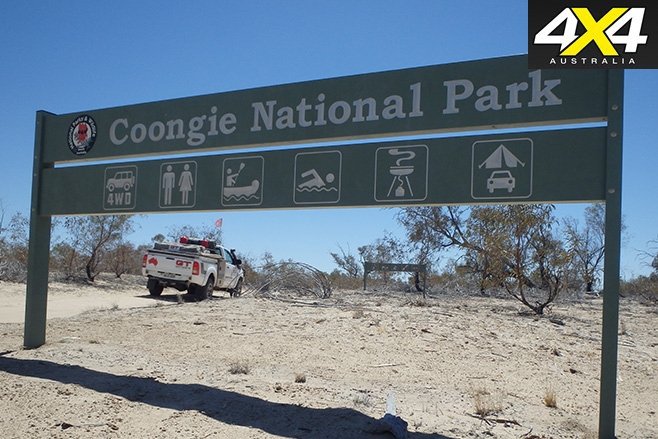 Despite the area’s isolation, the drive from Innamincka to Malkumba-Coongie Lakes National Park is a relatively easy one, with not much more to think about than the usual corrugations, occasional soft sections and a scattering of mining traffic.

As with much of inland and outback Australia, this 100km trek reminds modern travellers of the hardy and dedicated – but ultimately misguided – pioneer pastoralists who attempted to eke out an existence in the harsh dry landscape. The most noteworthy sign of these pioneers is the Kudriemitchie Outstation, around 85km from Innamincka. 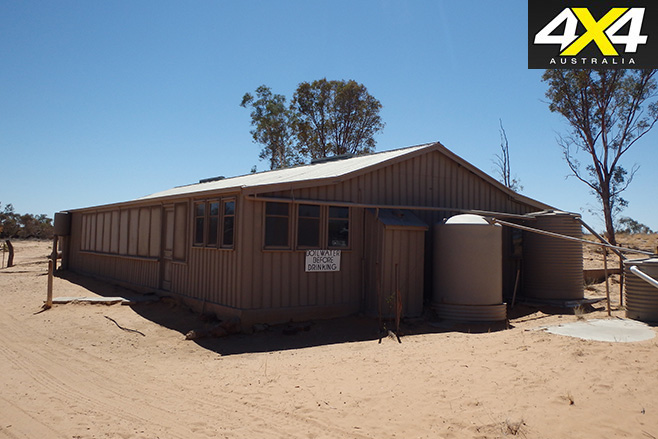 Just past the Outstation, a trio of delightful campsites – Kudriemitchie one, two and three – offer terrifically tranquil places to pop up a tent and relax for a while on the banks of the Cooper. Those three sites are worth the trek, but go an extra 20km and the lake shores will reveal a contrast that Australia’s few semi-permanent desert waterways provide – you’ll see a green paradise abundant with life thriving against the hot orange landscape.

Coongie’s camping areas are situated on the banks of Cooper Creek, where the lakes drain towards Innamincka (and, eventually, Lake Eyre). There are also sites around the south-eastern shore of the lake itself.

The creek-side sites have drop toilets nearby while the shore sites, accessed via the aptly named Lakeside Drive, are bush-camp. As is the case anywhere in the great outdoors, you are encouraged to stick to made trails.

Unfortunately, I saw fresh tyre tracks where they shouldn’t have been (and, disgracefully, plenty of dunny paper, too). The stupidity and arrogance of this raises a middle finger to the best efforts of the South Australian Parks staff and the original occupants of this area. 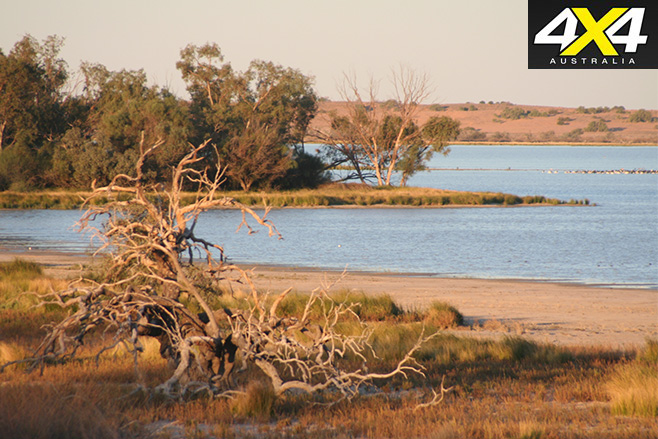 With the heat of the day subsiding, you can spend an hour or two wandering along the shores of the lake. Like many outback waterways, there’s usually several years between high tides – the lakes are replenished by rains in Western Queensland and were last full three years ago – so the shore of the lakes are often a wide expanse of grass. There are plenty of stark, dead trees on the lake shores – evidence of years without water – and they’re a terrific perch for the local wildlife.

On the ground there are animal tracks everywhere, while closer to the water’s edge there are mussel shells and several middens in the dunes.

Make sure you’re back at your campsite for sundown and dusk. Nursing a refreshing beer after choosing a Cooper-side site, I found myself enthralled by an incredible nature show. For around an hour before sunset, the air was filled with the screeching and bickering of hundreds of Major Mitchell’s cockatoos as they livened up from their tree-top afternoon siesta. 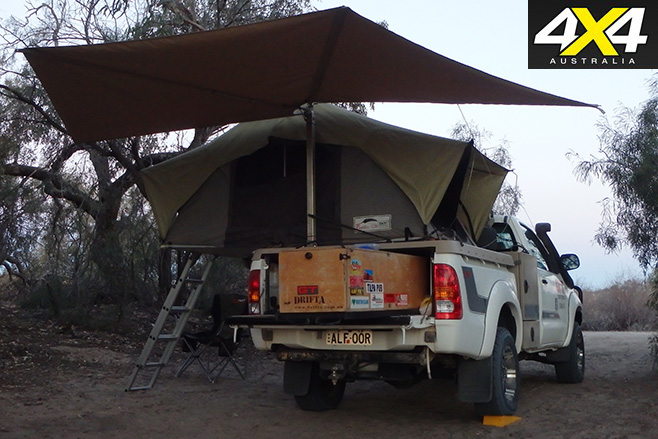 Opposite my site, a lone water-bird carefully paced its way along the creek bank, probing for a feed among the green floating plants. What I first thought were chunks of timber floating in the water turned out to be dozens of tortoises, nosing the air close to the surface of the cloudy water.

As the sun dropped over the horizon, the surface of the Cooper began almost fizzing with activity: insects touched down and inquisitive fish joined the tortoises for a look and an opportunistic nibble. Fishing is forbidden in the area, but as someone who’s enjoyed flicking a few lures over the years, I couldn’t help but think – how many fish are in here? 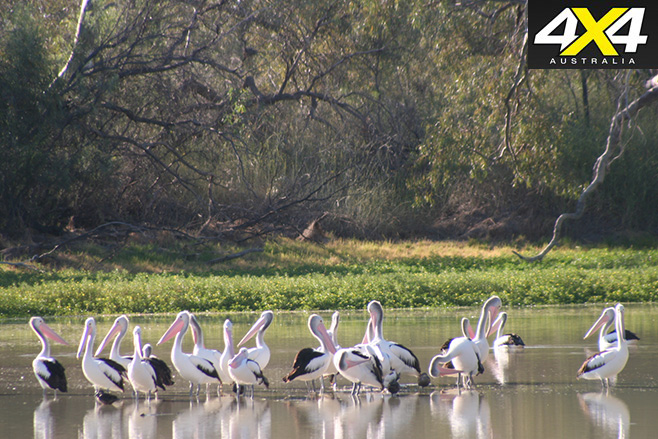 Minutes later, a few pelicans came in for a long swishy landing on the water. The few became many more as, for around 20 minutes, a 100-metre stretch of creek directly in front of the campsite was bombarded by pelicans landing in the water.

With camp lights on and the kitchen set up, I had my bug repellent out and ready. I was waiting to be attacked by biting insects, yet despite thousands of flying things buzzing around the lights – and suiciding on my hotplate as I cooked my dinner – there were no stings. 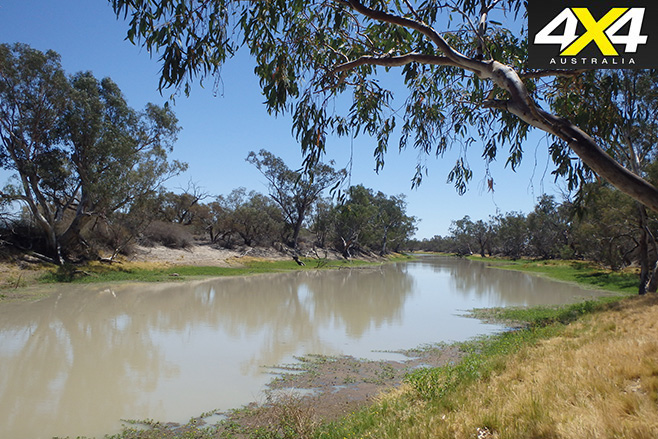 The next morning was tainted with regret for me, because I only planned for two days and one night at Coongie Lakes when the area deserved more time to really look around. Don’t make the same mistake, because it is a truly remarkable place. 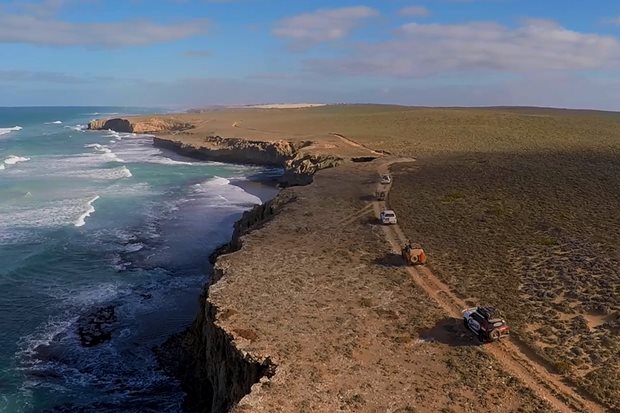 They don’t call the Great Australian Bight great for nothing. Check out this hour-long video of 4x4 Australia’s epic journey across the Bight. 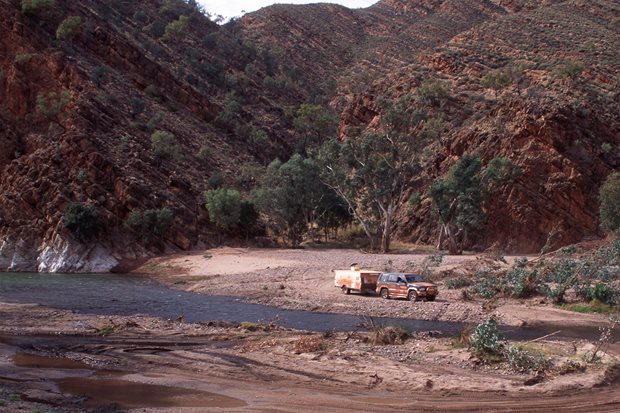 Ron Moon discovers that gold and gems aren’t the only treasures in the East MacDonnell Ranges.

There are many great 4WD routes in the Flinders Ranges, but this easy run simply can't be missed.