Of course, when you’re sitting down at home planning your trip to the Flinders Ranges and beyond, it would be excusable if you simply wanted to find the most direct route to get there as quick as you can. But don’t forget the journey is often as enjoyable as the destination. Whether you’re travelling to the Flinders from Melbourne or Adelaide in the south or Broken Hill in the east, there’s always the temptation to stick to the main roads to get there as quickly as possible and to make use of whatever time you have available to you.

So while most people travelling from the east along the Barrier Hwy from Broken Hill head all the way to Peterborough before making north for Hawker, there’s a much more scenic option for those willing to put a little extra dirt under their tyres. This option is also available to those heading up from the south.

YUNTA TO WAUKARINGA
THE route starts at Yunta on the Barrier Hwy, which is an ideal place to fuel up and grab any last-minute supplies. Directly opposite the BP service station is the start of the gravel road (Tea Tree Rd) that heads north to Waukaringa Ruins.

It’s not an all-weather road, but it’s clearly signposted at the start and will be marked either open or closed in sections; from Yunta to Arkaroola, from Arkaroola to Copley, and from Arkaroola to Innamincka. As this route peels off just beyond Waukaringa Ruins, you’ll only need to concern yourself with the southern section of the road being open (if in doubt, call 1300 361 033). 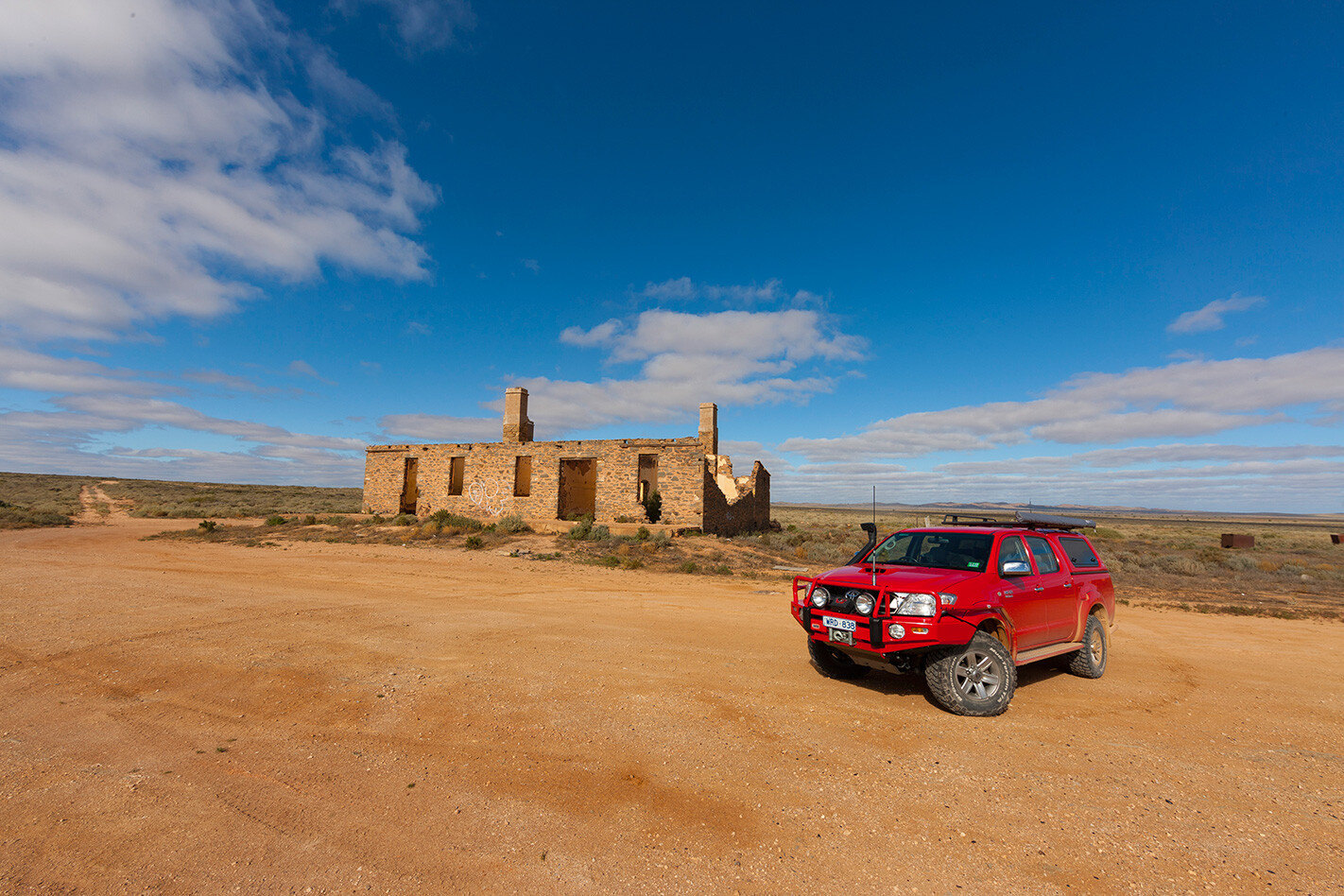 The undulating 35km road to Waukaringa was in pretty good nick the last time we drove it, but it sees quite a few trucks and can develop a few washouts and corrugations if it’s been a while between grading sessions. It’s advisable to air down your tyres at the start point, as you’ll be on unsealed roads/tracks from here to Hawker anyway.

Waukaringa Ruins consists of the crumbling old hotel, remnants of the old post office and some footings from other buildings that made up the goldmining settlement, which was settled in 1873 and abandoned in the 1960s. However, it wasn’t until 1982 that Waukaringa was formally declared to have ceased to exist. Back in its heyday, the Waukaringa Hotel must’ve been a thriving place with plenty of rooms and big cellars within the massive building. In 1890, Waukaringa was claimed to have had a population of 750 people, and wandering around the ruins it’s easy to imagine the locals enjoying an ale at the pub after a long day in the mines. A plaque donated by Kevin Kakoschke (author of Women of Gold and Off the Barrier Highway) lists all of the hotel’s licensees over the years, as well as some interesting Waukaringa Hotel facts. Another of Kevin’s plaques is located at the site of the old Waukaringa Post Office, and it lists all of the town’s postmasters from 1875 to 1964.

For those who want to spend the night here, camping is permitted in the immediate vicinity of the ruins, but it should be noted that the surrounding area is private property. There are no facilities here, so you’ll need to be self-sufficient and bring your own firewood.

WAUKARINGA TO HAWKER
ABOUT 12km north of Waukaringa Ruins is a turn-off to the left that heads northwest towards Baratta Ruin. This sandy track is quite narrow in places and winds its way through picturesque station country.

It passes through working pastoral properties, so you must stick to it, unless prior permission has been granted by the relevant landowner. You should also keep a close eye out for wandering stock and native fauna.

From Baratta Ruin, continue northwest towards Holowiliena and then turn left and head southwest to Cradock. The beautiful, old sandstone pub at Cradock dates back to 1881 and offers cold drinks, hot food and accommodation. It’s a great place to spend the night for those with time on their side. From Cradock, there are two options to the north: either head up the blacktop where it intersects the main road to Hawker; or head up the dirt, which will bring you to Hawker from the east. Both options are about the same distance, but the latter is the more entertaining of the two. Hawker offers fuel, a caravan park and a choice of motels.

From Hawker, the magnificent Flinders Ranges is at your doorstep: Arkaba, Wilpena Pound, the Great Wall of China, Brachina Gorge, Parachilna Gorge, Willow Springs, Arkaroola … but remember the journey is often as enjoyable as the destination.

ROUTE
Yunta, SA, is located on the Barrier Hwy, 195km southwest of Broken Hill and 88km northeast of Peterborough. Waukaringa Ruins are 35km north of Yunta, while the rest of this route only totals around 120km before you’ll find yourself in the pub at Cradock. Cradock to Hawker is only around 30km.

WHEN
You can visit the Flinders Ranges all year ’round, but the best time is between April and October when the weather is coolest.

MAPS AND GUIDES
You don’t need too much detail to successfully navigate this route, so a good touring atlas or Hema’s South Australia map will suffice. Alternatively, use a Hema Navigator or Hema Explorer on a mobile device.