The 11,000-hectare Freycinet National Park on the east coast of Tasmania is a tourist’s delight at any time of the year with its orange boulders, white sand and turquoise water.

Travelling in Tasmania is an easy affair. The roads aren’t exactly deserted, but once away from the major centres of Hobart, Launceston and Devonport it’s a far cry from the crowded roads of the mainland. The whole state has the air of a quiet country town and matters are less hurried. Despite Tasmania’s reputation for turning its forests into woodchips, large tracts of unspoilt wilderness remain, with some amazing places to visit. We arrived in Tasmania with temperatures in the mid-30s and, as we drove up the east coast, smoke from numerous bushfires in the centre and north-east of the state tinted the horizon a muddy yellow and the resulting haze diminished the views of the coastline.

We had hired a Nissan X-Trail for our time in the Apple Isle and, while my preference was for an auto, the only choice was a manual. Perhaps I’ve been driving autos for too long, but I found gear selection a pain. With some six gears to choose from and the very small gap between sixth and fourth, the X-Trail got a rude awakening more than once as the pilot selected second instead of fourth when dropping back from sixth. Otherwise, the X-Trail was a comfortable vehicle that performed well on dirt or bitumen.

Freycinet Peninsula and the Bay of Fires areas are among the most popular tourist destinations in Tasmania. Freycinet Lodge is the place to stay if you’re not on a tight budget. It has four-star accommodation set within the beautiful Freycinet National Park 200km north of Hobart, and rooms will set you back from $250 to $450 a night for a couple, depending on the time of the year.

The Lodge offers luxury cabin accommodation with 60 units nestled discretely in a bush setting. The main building faces Great Oyster Bay and features a restaurant, bistro, bar and lounge areas. We found the meals excellent and quite well-priced – considering the upmarket nature of the Lodge.

Towering over the Lodge is the Hazard Range with its pink granite outcrops. I initially thought the name might have something to do with its rugged nature, but apparently it is named after pioneering whaler Captain Richard Hazard. If you just want to sit, read a book and take in the water views through the Lodge’s huge glass windows, Freycinet will not disappoint, but it will reward those who make the effort to explore its hidden treasures. It is a photographer’s paradise with seascapes to die for. I was there for a photographic workshop that hit the road at 4am. Sad but true; photographers get up an hour before the sun – and the sun rises early in summer.

One of Freycinet’s treasures is Sleepy Bay, which is located on the opposite side of the peninsula 2km from the Lodge on the Cape Tourville Road. From the parking bay access to the beach is by way of an easy walk, mostly along a constructed gravel path for about 500 metres and a number of steps down to the water as you approach the beach. 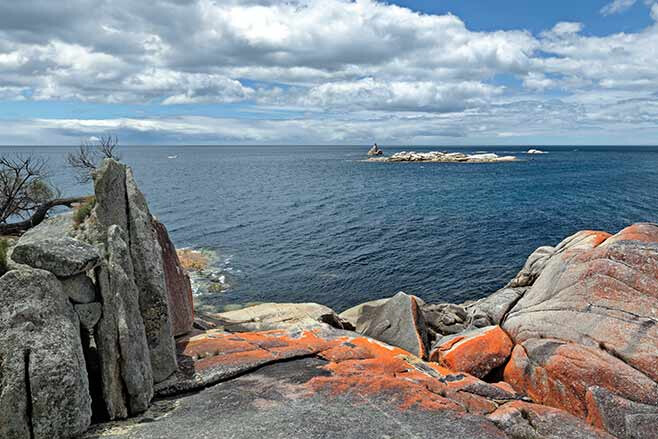 About 200 metres from the car park there is a rocky promontory off to the left that overlooks the bay. It's not signposted (other than by the boot marks of hundreds of photographers), but venture in and you may recognise the view as one that graces many Tasmanian travel brochures. The boulders and rock ledges that fringe the turquoise green sea are painted with the distinctive orange lichen for which this area and the Bay of Fires are famous.

From the Sleepy Bay car park, follow the road further to the east to Cape Tourville, where there is an easy loop walk around the lighthouse on the point. Here, high above the water, you are treated to amazing ocean views over the Tasman Sea with Freycinet Peninsula to the south-west. It’s also possible to catch a glimpse of the brilliant white beach of Wineglass Bay tucked away behind the Hazards.

At the lookout below the lighthouse, kids large and small will be interested to see the comparative size of various large fish and ocean-going mammals engraved on the boardwalk. 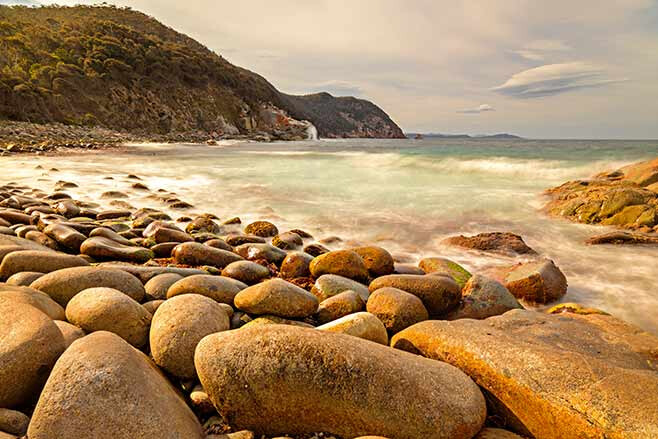 Heading back towards the Lodge is a four-wheel-drive track about one kilometre from the lighthouse car park that runs down to Bluestone Beach. This road definitely required 4WD as it had deep pot-holes, sharp rocks and various other obstacles I don't think the hired X-Trail had ever seen before. The beach itself was deserted, which wasn’t all that surprising given the drive in.

The shore of Bluestone Beach is littered with smooth rounded granite rocks as far as the eye can see. When you consider the size and weight of the rocks deposited there and shaped by the power of the sea, it serves as a reminder of the rough weather this coastline experiences.

Back at the Lodge and the Cape Tourville turn-off, the road continues south for 2km. From the car park at the end of the road you can find a couple of walking tracks, the most popular of which goes to Wineglass Bay Lookout. As a Class 3 walk of 1.5km, it requires only moderate fitness and, as the name suggests, it provides stunning views over Wineglass Bay. 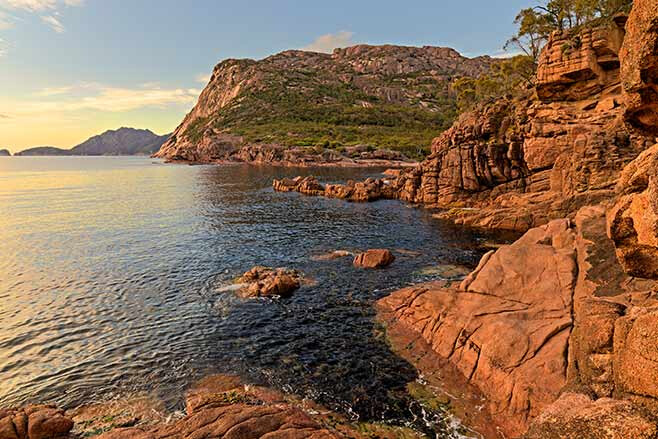 Those seeking a higher level of adventure and prepared to camp out can explore walks that continue on past the lookout and along the east cost of the peninsula or around its point.

Coles Bay township, 2km from the Lodge on the opposite side of Great Oyster Bay, is a great place to find a more keenly priced meal than the Lodge restaurant. Make sure you book, though, as we found that many Lodge guests head over for lunch and dinner. Having dined at local eatery Tombolos a couple of times, I can vouch for the tasty selection of meals they offer – including fresh Pacific oysters farmed locally. Coles Bay also offers a range of holiday rental accommodation for those planning an extended stay.

Continuing back up the Coles Bay Road about 6km, there is a turn-off  to Friendly Beaches on the east coast. Friendly Beaches provides miles of white unspoiled sand with beautiful views of the azure sea beyond. There is a camp site (with toilet) providing basic bush camping in individual campsites cut into the vegetation. 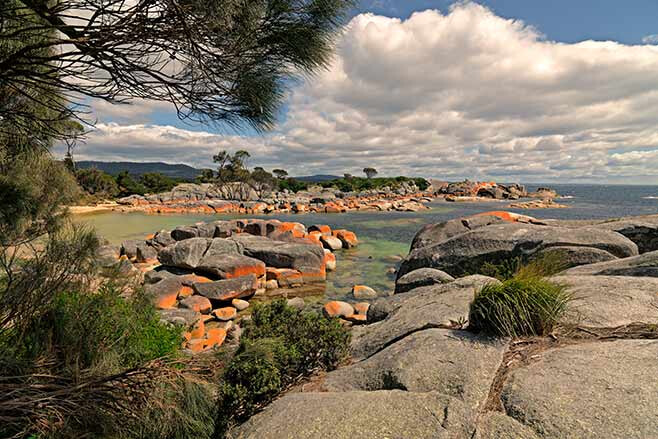 For those wishing to camp at Freycinet, there are 19 powered sites and 27 tent sites located behind Richardsons Beach. All sites have access to potable water and an amenities block with cold showers nearby. There are also seven campsites overlooking Honeymoon Beach that involve a bit of a walk to the amenities. Camp sites are allocated by ballot drawn on 1 August for the period from 18 December to 10 February, plus Easter.

The Bay of Fires Conservation Area 125km by road to the north of Freycinet is accessed by way of the Tasman Highway, passing through Bicheno and St Helens. You could be excused for thinking the Bay of Fires gets its name from the red lichen-covered rocks along the coast. However, it was named by Captain Tobias Furneaux in 1773 after he noticed numerous aboriginal fires along the coast.

It would be easy to spend several days exploring the Bay of Fires area, which is reached by taking the Binalong Bay Road from St Helens and then following a good bitumen road as far as The Gardens, a small collection of fishing shacks at the northern end of the bay. The area lived up to its reputation with sparkling blue-green seas and whiter-than-white sandy beaches that wouldn't look out of place in tropical north Queensland. Only the ever-present orange lichen makes it clear that you are a few thousand kilometres further south. The sand is pure quartz, hence the dazzling beaches and the reflected light through the shallows creating a beautiful turquoise colour.

Towns such as St Helens and Binalong Bay offer a range of holiday accommodation or, for the self-sufficient, there are many side tracks as you drive north from Binalong Bay that provide access to the beach, camp sites and lookouts.

Of four of the seven campsites between Binalong Bay and The Gardens have toilet facilities and, while Binalong Bay has at least one cafe, there are no shops north of St Helens. The ultimate experience is probably the guided four-day Bay of Fires beach walk, staying in luxury accommodation at the Bay of Fires Lodge and its Forester Beach camp. At around $2200 per person, depending on the time of the year, luxury comes at a price, but it does include transfers to and from Launceston and all meals.

With flights from Melbourne to Hobart as little as $39 at the time of writing, Tasmania is an affordable destination for a short getaway. The east coast of the Apple Isle has something for everyone: relaxing, bushwalking, fishing, photography, or just enjoying the laid-back lifestyle.

What's your next off-road destination? Find out and explore.