THE TRACK was overgrown with fallen trees, leaving just enough room for the Cruiser to slip through.

Brocks Road (more of a track than a road) deteriorates once you leave the short access track to Upper Jamieson Hut on the Jamieson River. There the so-called road begins its climb away from the stream and through a number of rocky and eroded switchbacks to the top of the Great Dividing Range. It’s relatively easy to get a camper into Upper Jamieson Hut from Sheepyard Flat (not far from Mansfield), but we wouldn’t advise taking it any further.

King Billy No 2 is at the crest of the range among large, old snow gums, and there is a small but pleasant camping spot on the nearby snow plains. Be warned though, as this is a very exposed campsite at an altitude of nearly 1700 metres. The weather here can change quickly, bringing sleet and snow even in the middle of summer. Still, the sense of remoteness and isolation is palpable and the views impressive. The Australian Alps Walking Track passes through this point and leads to the high points of King Billy. A track junction at King Billy provides alternate routes: continuing east will take you to Howitt High Plains Road and on to Licola; heading along the ridge on Bluff Track will take you on a painstakingly slow and rocky drive towards Lovicks Hut. From Lovicks Hut the track improves as it continues west to Bluff Hut, where you can descend the ridge to the Howqua River.

This high, rocky route passes through some fine stands of snow gums untouched by recent fires, including an ancient (some say at least 500 years old) snow gum that has been declared one of the 50 most significant trees in Victoria. Along the way you’ll also pass some great lookouts including ‘Picture Point’. This lookout was made famous in The Man from Snowy River movies, and the views take in some of the finest mountain scenery in Australia. Back in the 1850s and ’60s the whole region was seemingly awash with gold, making Beechworth at one time the most important town in Victoria. Over the years Beechworth has played host to Robert O’Hara Burke (of Burke and Wills fame), and Ned Kelly, who spent a few days in the local lock-up. 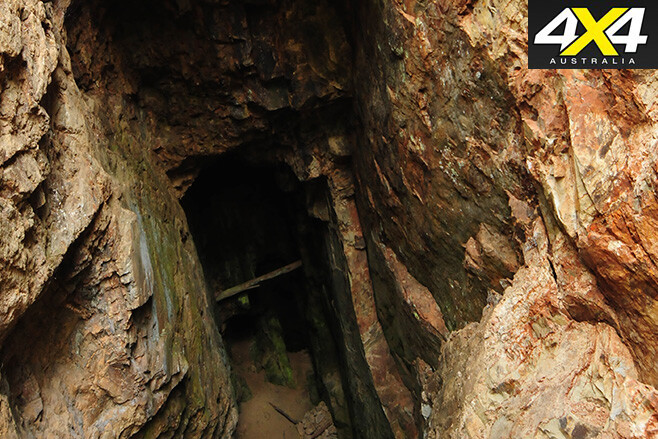 Today the heritage of the town is still very much intact, and the place acts as a good base to explore the local region. A maze of four-wheel drive tracks are in the area, but once you’re on the Wallaby Mine Track you’re close to the old mine site; although, last time we were there we were plagued with a lot of fallen trees and timber that made the track a little more challenging.

If you end up at the creek crossing down the very bottom of the steep hill – close to what I think is the large opening of the Rechabite Mine – you’ve come too far for easy access to the Wallaby Mine Gold Battery site and you’ll need to climb back up the hill, which is not an easy walk or drive. A walking track at the top of the hill leads down the ridge along the gully to the battery plant. This 12-head stamper was installed here in 1912 after an older battery had been damaged by fire. The mines in the area – the Wallaby, Rechabite and Kingston – were first worked in 1869 and continued producing gold until the beginning of WWI in 1914, when they closed for good. More by good luck than good fortune the old stamper has survived relatively intact – so make sure you leave it as you find it for others to enjoy.

On the other side of the ranges, north of Bairnsdale, the Deptford Road winds into the mountains from the flat coastal plains of East Gippsland. The route passes the old town site of Store Creek and soon comes to the site of Deptford, once an important town on the Nicholson River Goldfields and the site of one of the earliest gold strikes (dating back to 1852) in Gippsland. It was only a small goldfield, attracting just 300 people or so, but the town soon had a bakery, a pub and a school which remained in operation until 1928. 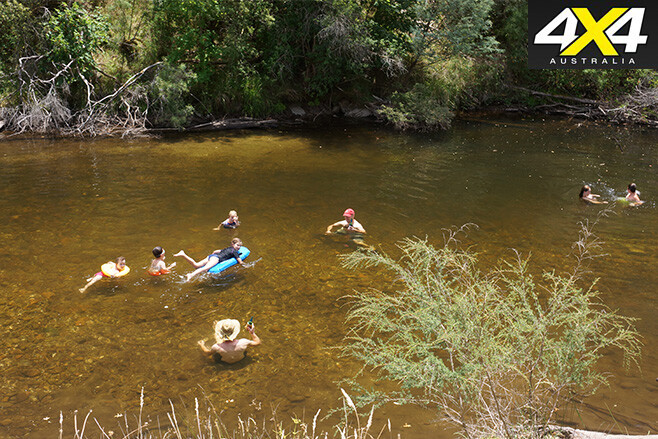 Once you cross the stream at Deptford there’s a pleasant camping area just up the hill, and a few deep pools in the river make for a great spot to cool off or cast a line. The nearby Slaughter Walking Track leads to the town’s old baker’s ovens, as well as the Houghton’s Diversion Tunnel on the Nicholson River. From Deptford a series of bush tracks will take you deeper in the mountains or towards Swifts Creek and Omeo.

Moscow Villa Hut has long been one of our favourite spots in the High Country and is easily reached from Omeo, Swifts Creek or Ensay. The name Moscow Villa came about when Bill Ah Chow, who was working for the forest commission in those days as a fire spotter, built the hut so he had somewhere warm and comfortable to stay during the summer. The Battle of Moscow was being fought at the time – the summer of 1941/2 – and Bill thought it would be a good name for his new home. 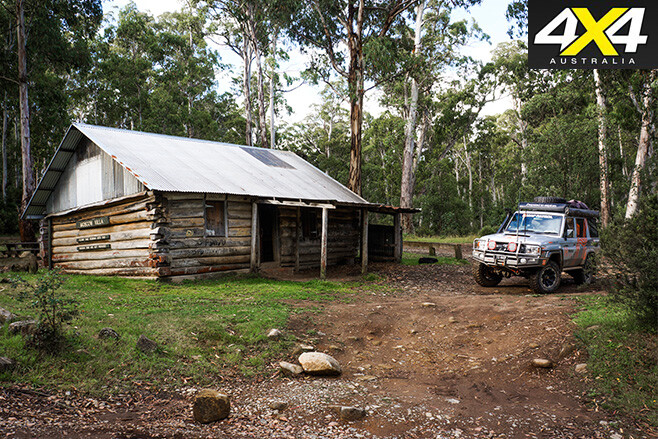 The hut remains in a really good condition, but we prefer to camp just a few hundred metres away on the Bentleys Plain Reserve. There’s a great shelter shed there, along with a bush dunny, fireplaces and a number of walking tracks across the surrounding snow plains.

The much bigger Nunniong Plains aren’t far away, and the impressive Washington Winch is passed when coming here from Swifts Creek or Omeo. Check out the info board on the winch and see if you would’ve been game enough to work as a logger using this winch set-up. I’m guessing there were no occupational health and safety standards back in the ’50s! 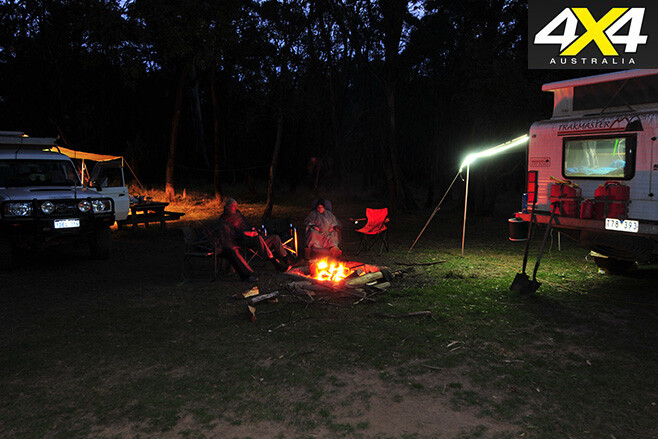 The Wombat Post Office is another unique hut and camping spot found deep in the mountains south of Mitta Mitta and north of Omeo. For our latest escapade we came in along Omeo Valley Road, passing the excellent and large camping area on the Mitta Mitta River at the old Hinnomunjie Bridge.

From here we headed north on Kellys Road before coming to Four Mile Creek Track. This oft-eroded track leads east to the Mitta River at Taylors Crossing, which is a good spot to camp, canoe and fish. Four Mile Creek Track also heads northwest from the junction through mountains and forest to a cleared area on the edge of two small streams, one being Wombat Creek. Crossing the creek leads to another small clearing with a low, dilapidated hut standing in one corner.

This is the Wombat PO and it dates back to the 1850s when the immediate area was a small gold-producing site, but I’m unsure whether the old hut saw any mail being sorted. Still, it’s a good spot to camp, and in the surrounding area there are a heap of 4WD trails that will keep you busy.

For some reason or another I have always bypassed the tracks around the Avon Wilderness in the southern section of the Victorian High Country. However, we poked our noses in and quickly realised that we should have been making this area a favourite. Huggett’s Crossing on the Avon River is a cracker of a campsite that is best reached from Heyfield. Head out along Weir Road, cross Macalister River just below the Glenmaggie Weir, and then take Lanigan Road. Once you’re in the forest proper, turn onto Kentucky Road and then Greenhill Road. Eventually you’ll get onto Huggett’s Road and pass Huggett’s Lookout, before descending quite steeply on a rocky track to the crossing of Avon River. There are a few designated campsites along here.

There are also some good tracks and quite a few challenging ones deeper into the ranges. Check the crossing of the Avon before plunging in as it is wide and fast-flowing, with a lot of boulders you can get hung up on. Once on the far side Huggett’s Track climbs steeply in parts to the crest of Mt Angus, before coming to the Old Moroka Road which gives great access to Moroka Hut, Moroka Road, the impressive viewpoint of The Pinnacles, and the top of the famous Billy Goat Bluff Track. You are now in the heart of some of the best 4WD country in Australia. Take the time to enjoy it all!

MOST of the tracks in the Vic High Country are subject to seasonal closure after the Queen’s Birthday long weekend in June and before the Melbourne Cup long weekend in November, although closures can be extended if the weather dictates. Many tracks will be blocked by fallen trees early in the touring season, so be prepared with all the right equipment and recovery gear. For the latest info go to: www.4wdvictoria.org.au

The best map for the region is Hema Maps’ Victorian High Country.