And a long honour roll of drivers (including Alberto Ascari) who, thanks to the appalling safety standards of the time, had left the building. Permanently. 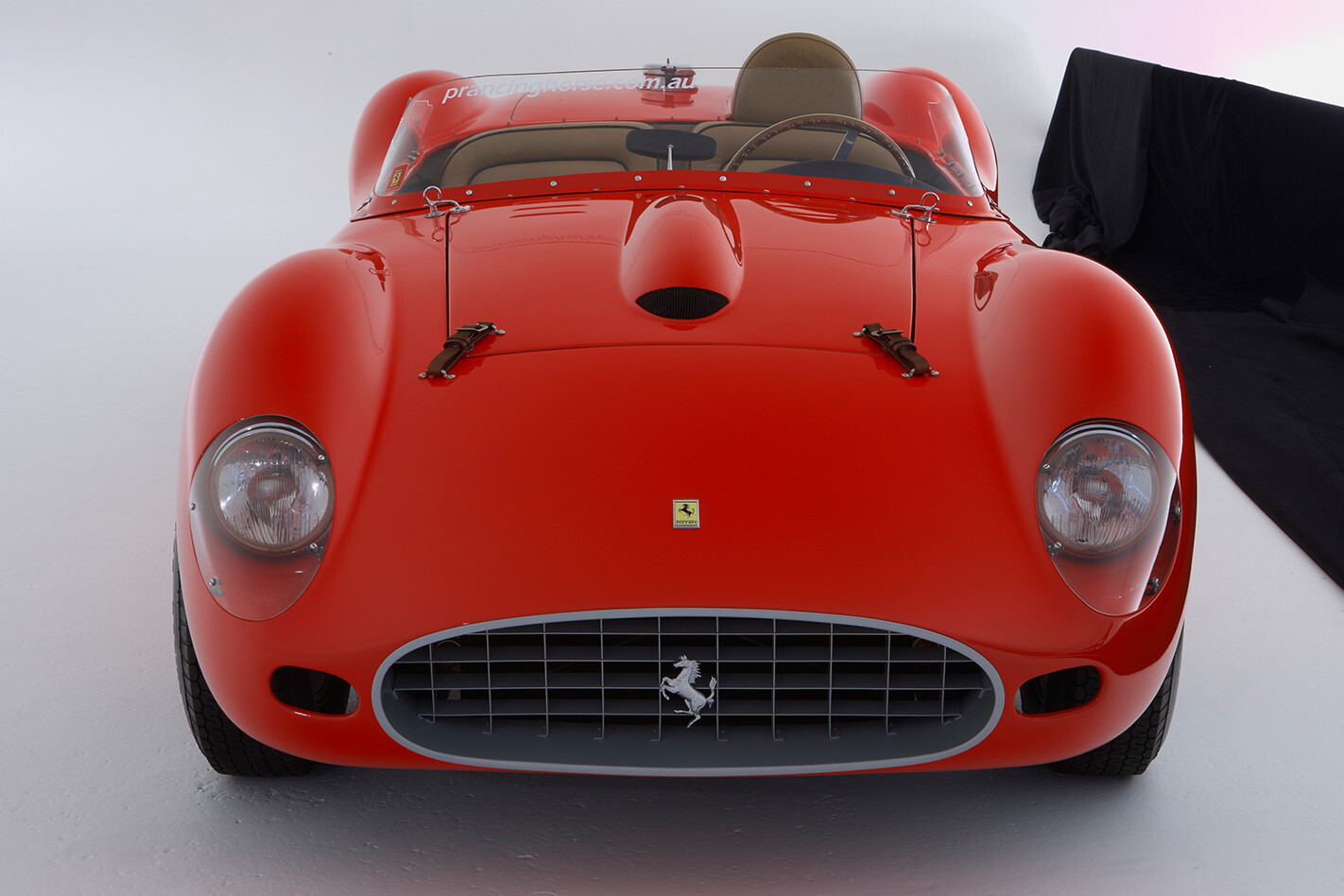 At the two-hour mark of the annual 24-hour classic, Mercedes works driver Pierre Levegh, caught up in a racing melee on the main straight, collided with the back of an Austin-Healey, launched into an earth bank and disintegrated with bits of the car hurtling into the packed grandstand.

Levegh was killed, as were 83 spectators. A further 120 onlookers were injured.

The scene was horrific. The car's front axle and engine had torn free, clubbing people to death. The bonnet had decapitated several more as it sliced through the packed crowd. The event still stands as the worst ever motorsport calamity. YouTube it; it'll make your neck prickle. The shockwaves forced Mercedes to not only pull out of the race a few laps later, but also to abandon motorsport altogether. A factory-backed three-pointed star would not return to race tracks until the 1980s.

And it was against this horrific backdrop that the Ferrari 250 Testa Rossa was born.

Built in 1957 through to 1961, the 250 TR was a direct response to rule changes aimed at making motor racing less of a blood sport. Most notably, those changes consisted of an upper limit for engine displacement at three litres, although Ferrari was still allowed to run drum brakes all round when most of the competition had switched to discs. 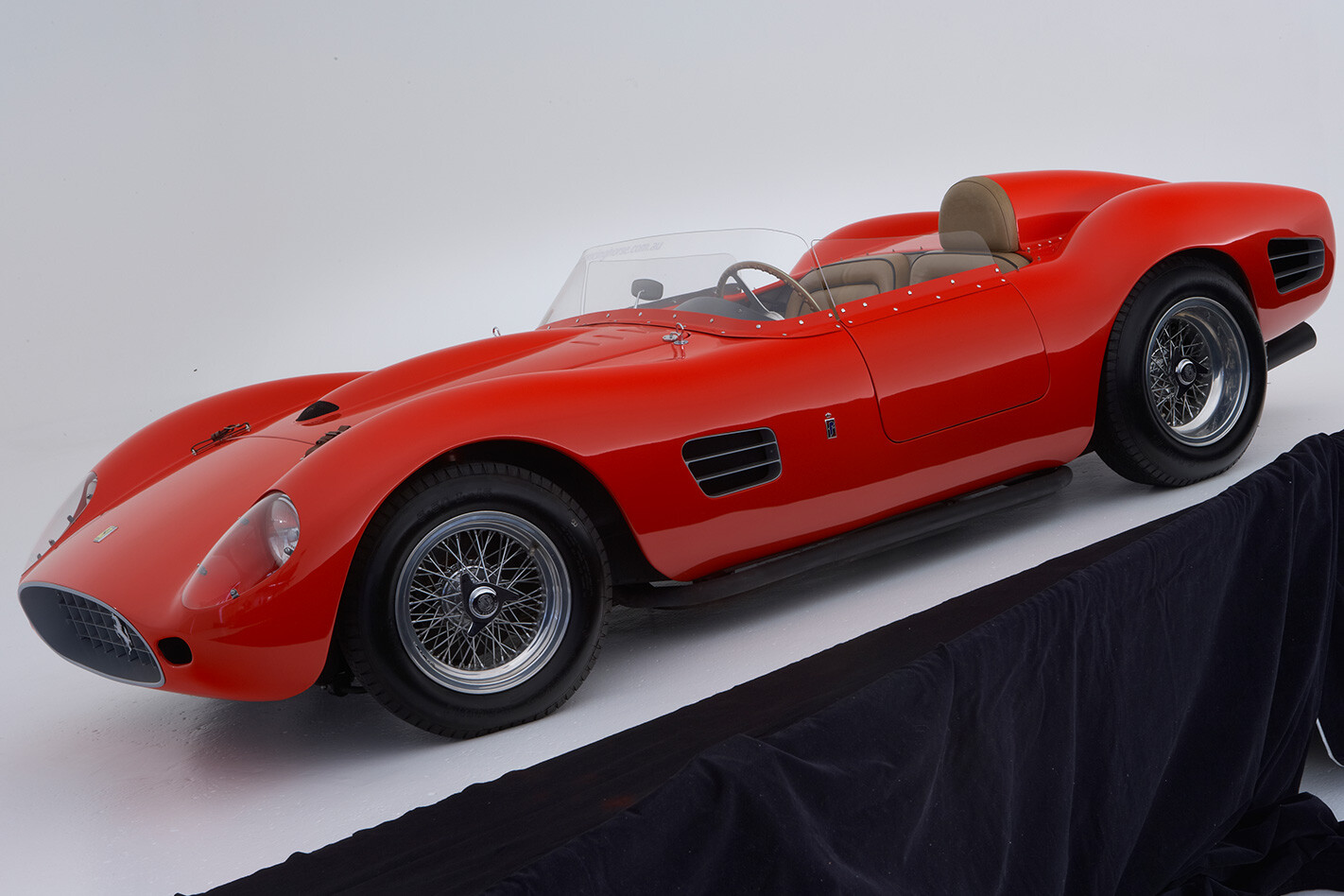 Beyond the brakes, though, the 250 TR was equal parts brilliance and pragmatism. The pragmatic bits included the actual method of construction, which remained a tubular steel ladder frame, similar to what Ferrari had already been building.

The bodies for the first 19 cars, built in ’57 and ’58, were by Scaglietti in a striking `pontoon' style that also cleverly allowed for air flow to help cool those drum brakes. Which explains the huge area apparently scalloped out just behind the front wheels.

The problem there was that the sheer amount of air passing through the body created lift and the factory cars were soon sporting modified bodywork to keep them on the deck at 270km/h, a speed they could apparently attain.

The factory works racers used a De Dion tube rear end while customer cars got a much simpler live axle under the TR's backside. At the front, unequal length A-arms and coil springs were joined by an anti-roll bar and hydraulic dampers. Steering was by worm-and-peg, while a conventional four-speed gearbox was used. All up, weight was a lithe 798kg and there was 2350mm of wheelbase, a 1308mm front track and 1300mm at the rear. But you could also put the engine's layout into the pragmatic category, too, and many critics did, claiming the `Colombo' V12 was an artefact, not a race engine, dating back, as it did, to the very genesis of the Ferrari brand.

That view wasn't helped by a further decision by the Old Man that meant that, rather than opt for a quad camshaft design (as Maserati was doing), Ferrari switched back to a single overhead camshaft on each bank of cylinders and two valves per cylinder.

As well as greater reliability during long-distance races, the SOHC layout also made life easier for the privateer teams that were certain to compete in the 250 TR.

But while Ferrari may have been a bit conservative when it came to camshafts, one thing was not negotiable, and that was the V12 layout. The engine's 2953cc were courtesy of a hugely over-square layout of 73mm pistons and a crank with a 58mm throw. Compression was a meaty 9.8:1 and the thing breathed through a half dozen Weber 38DCN down-draught carbs that filled the Vee's valley like a little regiment of velocity-stacked soldiers. It looks stunning. The other visual highlight of the engine bay was, of course, the bright red valve covers which is, in case your Italian is a bit iffy, is how the car gained the Testa Rossa (Red Head) tag. So now you know.

Given that this was still before the 1960s had arrived, the output of 224kW – 300 old-school horsepower – at 7200rpm was pretty incredible. Combine it with the sub-800kg mass and you had a real rocket on your hands. The 76kW per litre figure is one that modern atmo engines still struggle to achieve. After a hugely successful 1958 season – the first year of the new regulations – where the TRs captured Ferrari's third win at Le Mans, work began on making the Testa Rossa even better, and that's where the car in these photos comes in (in a sort of manner, but we'll get to that; see sidebar).

Ferrari didn't rest on its laurels after the Le Mans win, however, and pretty much began work immediately on making the Testa Rossa even more capable at winning races. And right here the customer-car program was also dumped to concentrate on building factory machines.

After that point, the previous season's factory cars were more or less handed down to favoured privateer teams, so the Pontoon cars continued to win races even after the factory switched to the new TR59 model. 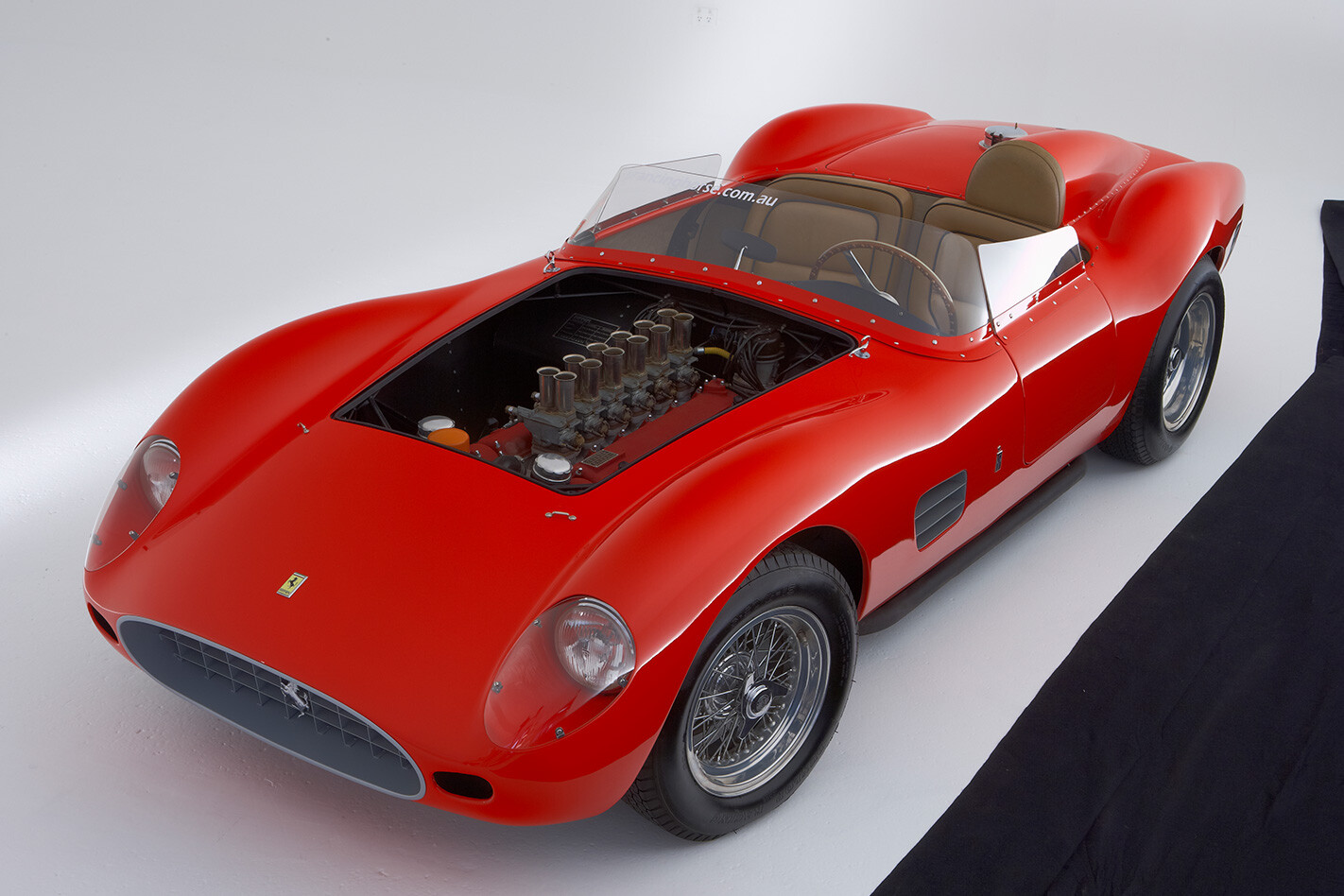 Meanwhile, much of the development work going on at the factory was about making the chassis work with the newfangled disc brakes (at least for Ferrari; other teams had been using them for years).

The V12 was marginally updated with a switch to coil springs for valve actuation, yielding 228kW, and the lump was moved across to the left by 100mm to make way for the new five-speed gearbox. Again, Pinninfarina was called in to sketch up the body, but building duties went to Fantuzzi, as Scaglietti was now busy making bodies for road cars.

So, with its new disc brakes, the 250 TR headed for the season-opener at Sebring and, some small dramas aside, pulled off a one-two finish at its first outing. The rest of the year didn’t go so swimmingly, however, and the new five-speed box contributing to diff failures, followed by a string of engine failures attributed, at the time, to the drivers over-revving the V12. Despite a pit-boss imposed upper limit of 7500rpm, the tacho tell-tale on Jean Behra’s car at Le Mans was showing 9300rpm at his first pit stop.

Not too surprisingly, Behra was out after 10 hours with a lunched motor. By the 20-hour mark, all three factory cars were out. The flip-side is, of course, that you can’t stop a born racer from racing and part of the blame must surely be laid upon the team management which knew the car was under-geared but, strangely, did nothing about it for the 24-hour classic.

Some minor alterations were made for the 1960 season and they centred mainly on finding a gearbox that would work with the rest of the package. The move to a fully independent chassis was made as a running change in time for the Le Man test day of 1960, but it wasn’t until 1961 that Ferrari finally developed a space-frame chassis for its Testa Rossa. The ‘shark-nose’ TR 61 continued to use much the same driveline but was now much lighter and stiffer than ever before. In any case, the dream was over by 1962, when rule changes forced teams to drop the prototype formula in favour of a GT class. Cars such as the TR were still allowed to compete for overall victory, but couldn’t score championship points, making them obsolete for the likes of Scuderia Ferrari.

Okay, here's the deal. The car you're looking at is not an original 250 TR. But neither is it a replica or a recreation. And it's definitely not a fake.

Re-bodying cars is more commonplace for the era than you might think. And since Ferrari used the TR's V12 engine and other mechanical bits and pieces across a huge range of models, there's a lot of interchangeability. And to the extent that the driveline in this car is fundamentally the same as an original TR's.

The conversion was done sometime in the last five years or so and Pinninfarina in Italy got the job. This is crucial, since it was the same Pinninfarina that bodied the original 1959 TRs, which only adds to the car's authenticity.

But why re-body a 330 as a Testa Rossa? Mainly because it's the only way to get a 250 TR if that's what your heart desires. See, there were probably only four 59 TRs  made to the same spec as this one. In fact, only 34 250 TRs were ever built in any of its various forms between 1957 and 1961, so no prizes for guessing that it's a seller's market.

This car was brought to Australian in 2008 from an owner in Los Angeles and it's now for sale through Prancing Horse Racing in Sydney.

And the sticker? A cool million-plus, although compared with the US$12 million that an original pontoon-bodied 250 TR fetched at auction in the States last year, that seems like pretty good value.