I’m feeling a bit overdressed as I exit Bologna airport. My attire is meant for sub-zero temperatures, but today the sun is shining and the thermometer is climbing above 20 degrees, which is why the taxi drivers study me with the kind of hesitant curiosity a polar bear would get at Bondi. And they don’t even know the worst part yet. I’m here to collect a Lamborghini Gallardo. Nice one, indeed. Except this one is fitted with winter tyres.

This feature was originally published in MOTOR’s November 2004 issue

The winter tyres fitted to the Gallardo are manufactured by Pirelli and in the same dimension as the standard P-Zero’s – 235/35 and 295/30 ZR19’s front and rear, respectively. It’s not so much a gimmick as a statement from Lamborghini, and one that would have had zero credibility without parent company Audi lurking in the shadows.

Lamborghini’s ambitions for the Gallardo include Porsche 911-reliability, and that means you should be able to drive your Gallardo all year round. And that means offering winter tyres. Never mind that most Gallardos will still hibernate in a heated garage, because so do most 911s. But just imagine using a Lambo for the blast to the slopes in Comptina d’Abruzzo and a weekend of all kinds of powdered substances. That’s where I’m going, in case you wondered.

There’s little doubt Audi is the main reason Lamborghini is still among us. Even if it means that, from time to time, the family ties will strain your patience. Driving a Gallardo on the Autostrada, it’s a matter of seconds before you have an Audi RS-something on your tail. Or an A3 TDi in front of you, charging like a bat out of Ingolstadt to show he can go just as fast. Which he can’t. These days nothing gets Audi owners’ juices flowing like the sight of a Lamborghini. They act like – well, like they own it. Worse still, I can’t lose them.

Development driver Giorgio Sanna warned me that with temps this high, the winter tyres would make the Gallardo lack stability on full song. In fact, it would be best to limit its speed to 160km/h, or I’d run the risk of frying the rubber before reaching the snow in the Italian Alps. Restraining yourself from making full use of that V10 requires the discipline of a Tibetan monk.

Classic MOTOR: 48 Hours in the Gallardo 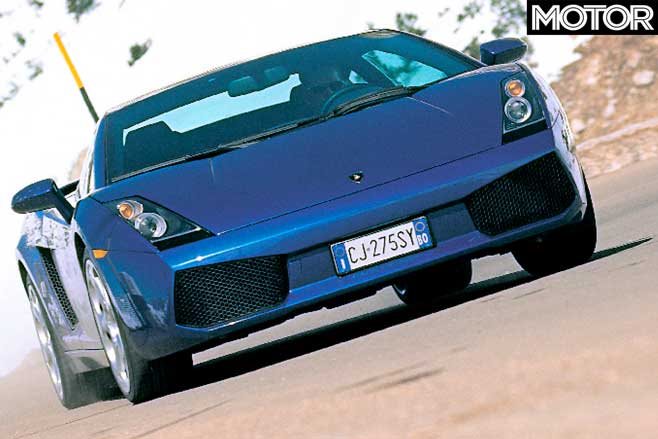 The 90-degree V10 is a phenomenal engine, even if its soundtrack isn’t what you’d expect. It’s nothing like the high-pitched Formula One wail, but more like a classic V8 rumble with a couple of extra cylinders crafted onto it, getting increasingly more soprano as its revs climb. On the Autostrada, it gets quite noisy once you arrive at 160km/h, but then settles down again above 200. And there’s still another 109km/h to the maximum velocity.

Like the scissor-doors on the Murciélago, all-wheel drive has evolved into a Lamborghini characteristic, and Gallardo uses the same Viscous Traction system first seen on the Diablo. In normal conditions,
70 percent of the power is directed to the rear wheels.

The Viscous Traction, which is self-regulating and completely mechanical, can send as much as 80 percent to the rear, or split the power equally between the two axles when the going gets slippery. But as far as off-road capabilities are concerned, nothing that ever came out of Sant’Agata can match the Lamborghini I’m about to rendezvous with. It’s massively powerful. It’s all-wheel drive and no, it’s not an LM002. 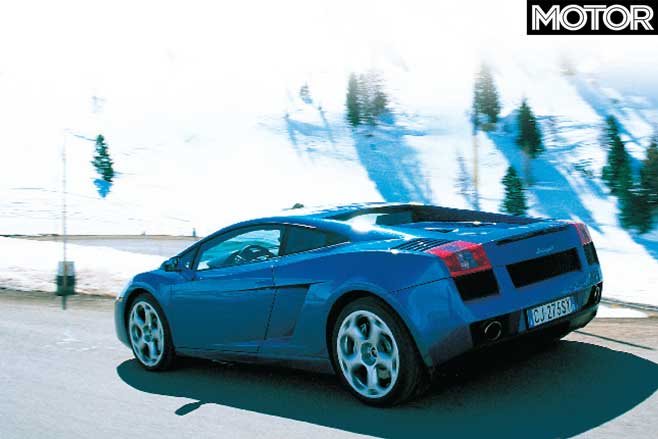 Ferruccio Lamborghini always regarded motor racing as a waste of both time and money. It’s a little-known fact, then, that Lamborghini has built more single-seaters than Ferrari. Thousands of them, in fact, even if it would be fair to say they were a bit, well, agricultural. I’m driving one right now, and even if you’ve never heard of it before, it says Lamborghini on the engine cover and the fighting bull sits proudly on its nose, just as it does on the Gallardo.

It’s called the R6.165 S – which is not as sexy as Murciélago, of course, especially when you learn that 165 is the power output. But this thing will dwarf anything to ever come out of Sant’Agata. The R6 has four-wheel drive, a 40-speed ’box, weighs a massive 5.7 tonnes, and musters a Gallardo-crushing 683Nm from just 1400rpm.

Top speed? Well, top speed is such a meaningless value, isn’t it? If you must know, v-max is a mundane 40km/h. As a matter of fact, the press kit highlights the R6’s ability to crawl along at 0.45km/h as one of many great advantages – probably so you can drive around your farm slow enough to watch things grow. 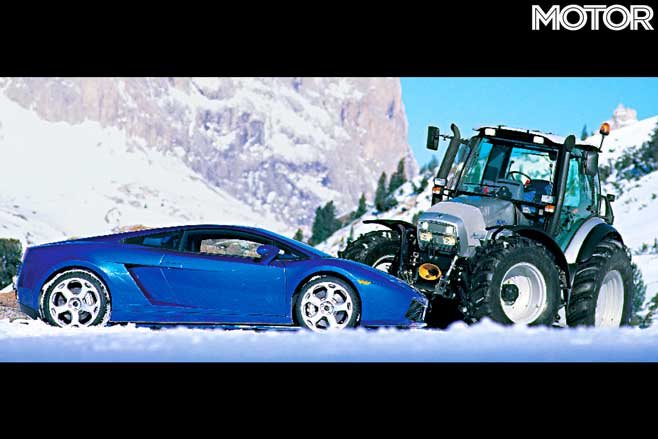 A Lamborghini R6 demonstrates beyond a shadow of a doubt that speed and road safety aren’t linked together. I’m driving slow enough to be passed by a funeral procession, and yet I’ve never posed a greater danger to other road users. From the cabin of this three-metre-high beast, you can see the chunky front tyres rotating and ready to carve up oncoming traffic. Imagine turning around a hairpin and have something bearing down on you that should be confined to a Monster Truck arena. It wiped the smile straight off the face of the guy in the yellow Audi RS4.

The obvious question lingers, of course. What do the Lamborghini R6 and the Lamborghini Gallardo have in common? Well, nothing and everything. In the early seventies, Ferruccio sold Lamborghini Trattori, along with Automobili Lamborghini, after 11 years of building cars and 26 years of building tractors. Today, the two share nothing but the name and the trademark. But without the tractors there never would have been a sports car carrying the name of Lamborghini. It was, after all, in a corner of the tractor factory that the very first 350 GTV prototype came to life in 1963. 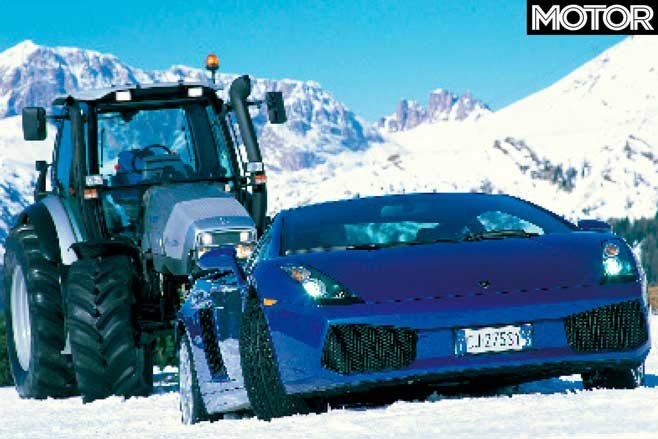 But it nearly came to an end in 1965, when Ferruccio set his eyes on a lucrative government contract to build helicopters. A handful of prototype L-59 choppers were built, but then Ferruccio was presented with the Miura, and decided that staying on the ground might be best after all.

Good thing he did, too. Without the tractor, I might have been forced to abandon the Gallardo in a snow bank somewhere around Canazei. Despite winter tyres and four-wheel drive, it got stuck. For a seven-litre turbo-diesel straight-six, though, towing a 1450kg Gallardo is hardly worth mentioning. And suddenly the crawling system makes sense, the R6 pulling its little brother free at a feather-light 0.45km/h. 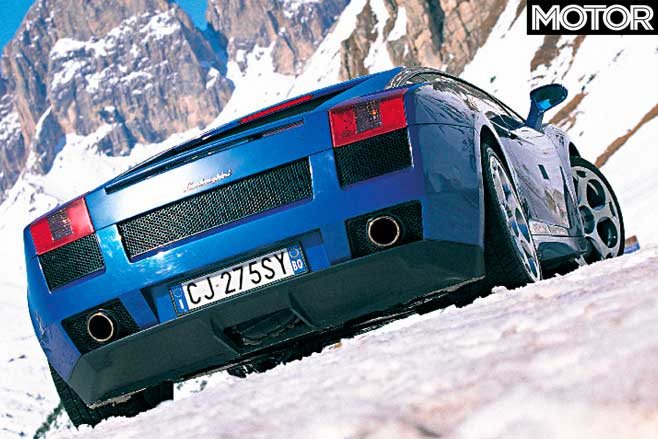 You find yourself strangely endeared to this gentle giant. It will lift four tonnes with its front fork, which will teach your neighbour not to put his 4X4 in front of your driveway. It literally ploughs through everything, and runs over obstacles as if they weren’t even there – which, of course, after the R6 has been through, usually they’re not.

The R6 is something for the man who thought he had everything, but is missing the hilarious thrill that 5.7 tonnes of tractor can provide. And I’ve saved the best bit for last, of course. If you don’t see yourself in a tractor, just remember one thing. This is one Lamborghini in which to have the most devilish fun. And you’re guaranteed never to get a speeding ticket. 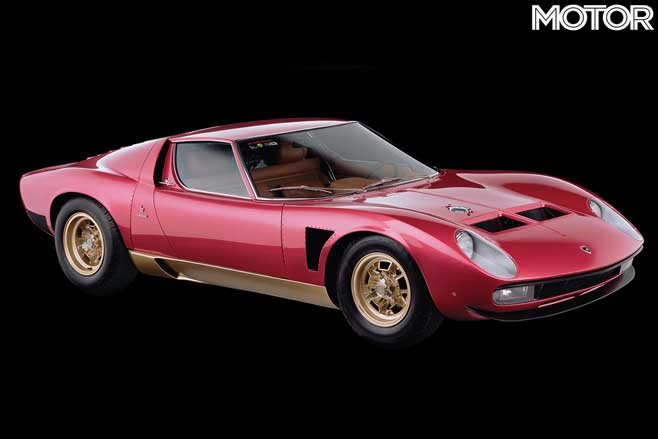 Before the Gallardo and Murciélago, only once has Lamborghini fitted snow tyres to one of its cars. It was a Miura SV J made for the Shah of Iran and it was delivered to the Shah’s St Moritz winter retreat by legendary Lambo test driver Bob Wallace.

Even with its studded tyres, the 309kW SV J must have been close to undriveable on the wintery roads and it says plenty for Wallace’s ability that he delivered the car without a mark. Even so, after sliding around St Moritz a few times, the Shah quickly lost interest.

After the Iranian revolution of 1979, the Miura was confiscated and left unused for years, unlike another of the Shah’s Miuras, which was fitted with driving lights and used for “government business”.
The SV J was not heard of again until Hollywood actor Nicolas Cage bought it in 1997 for a record-breaking $690,000. Cage sold it on a few years later. 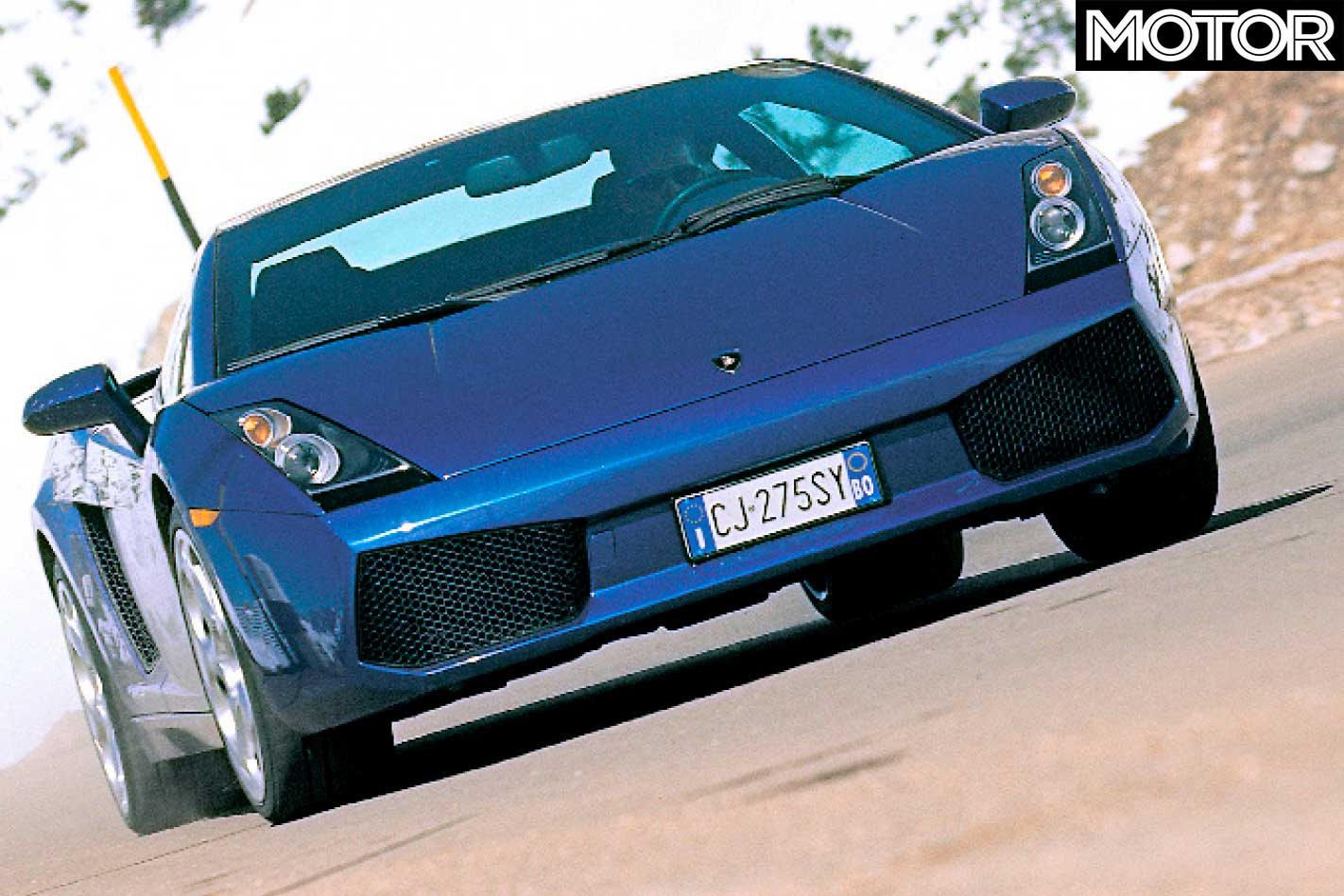 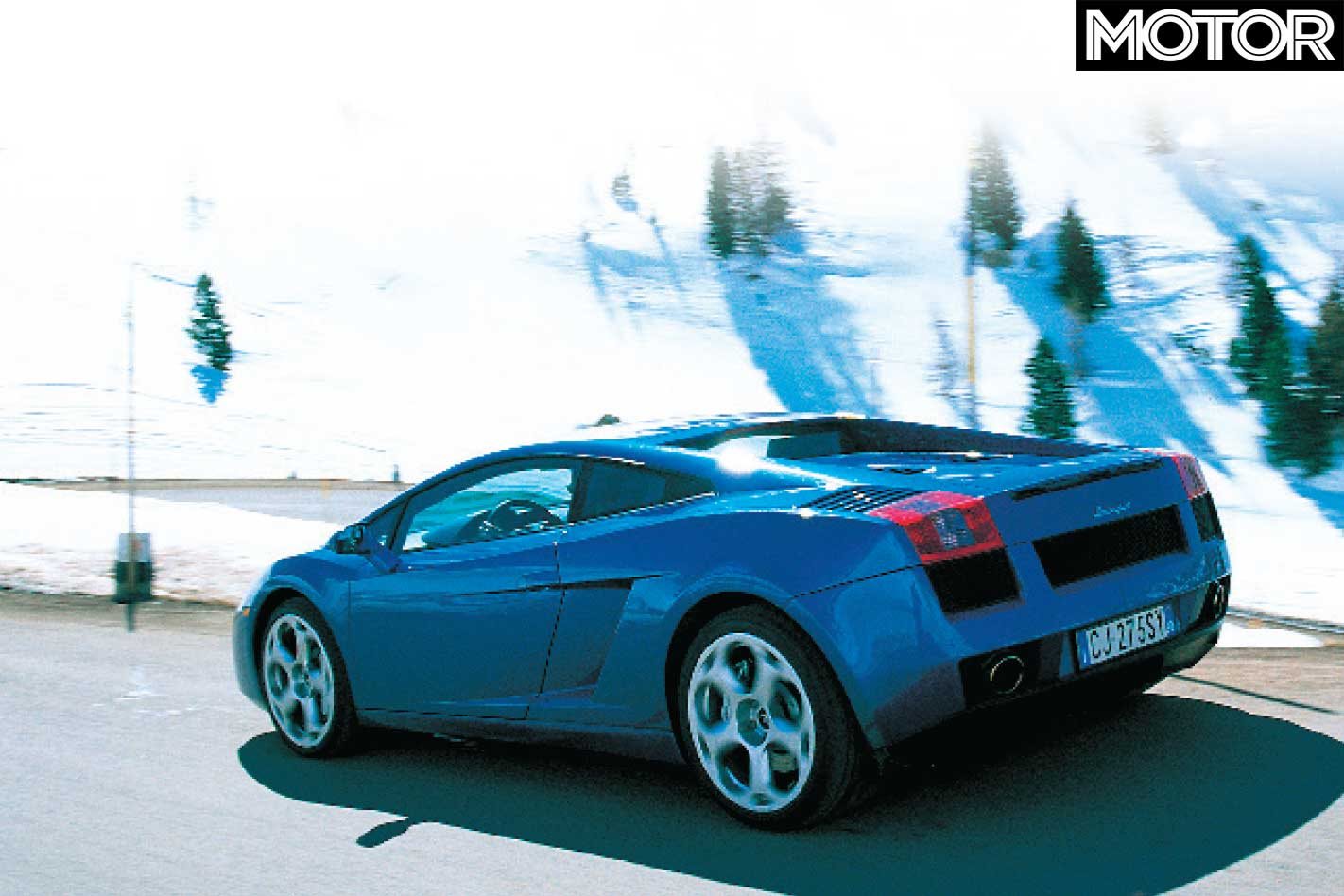 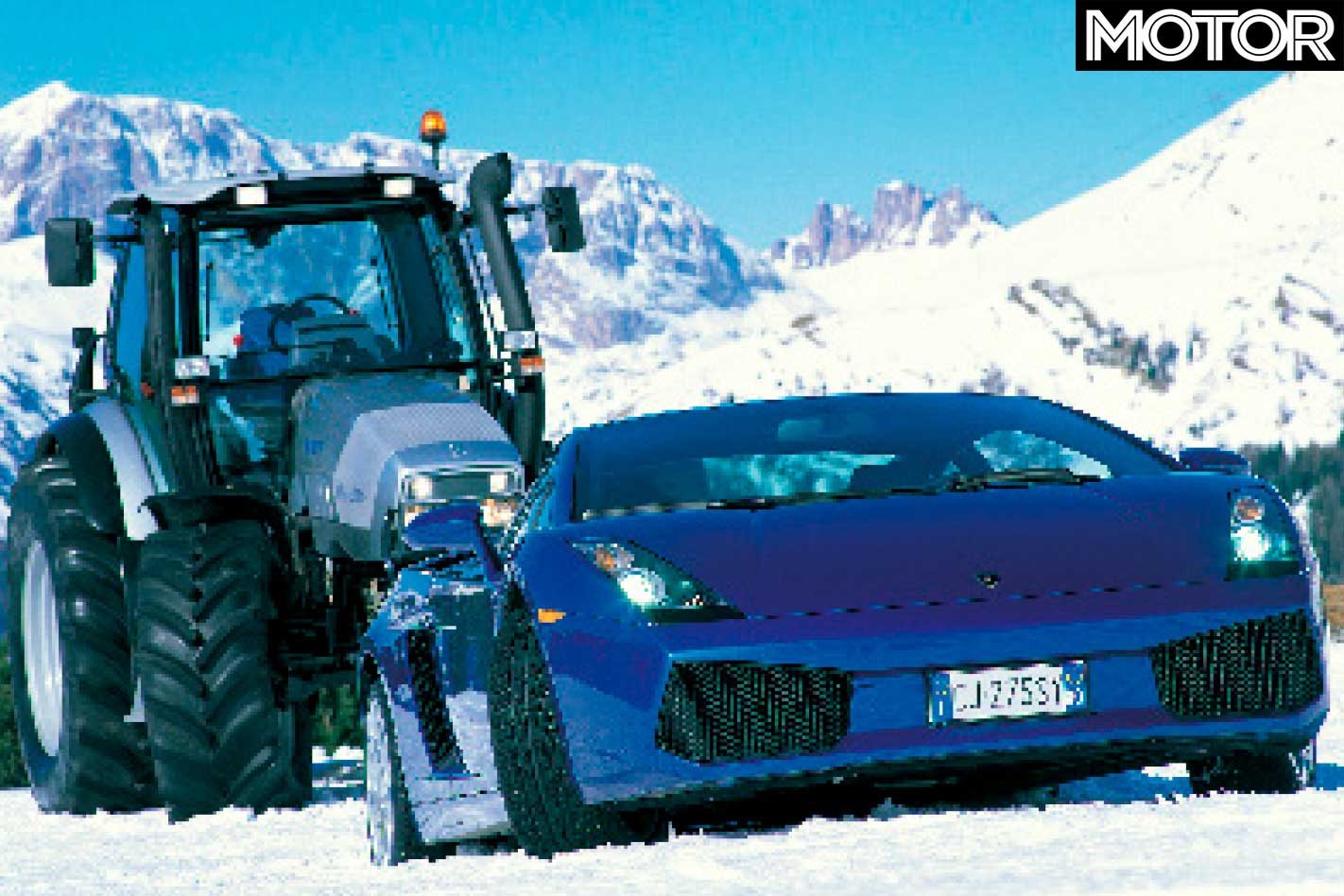 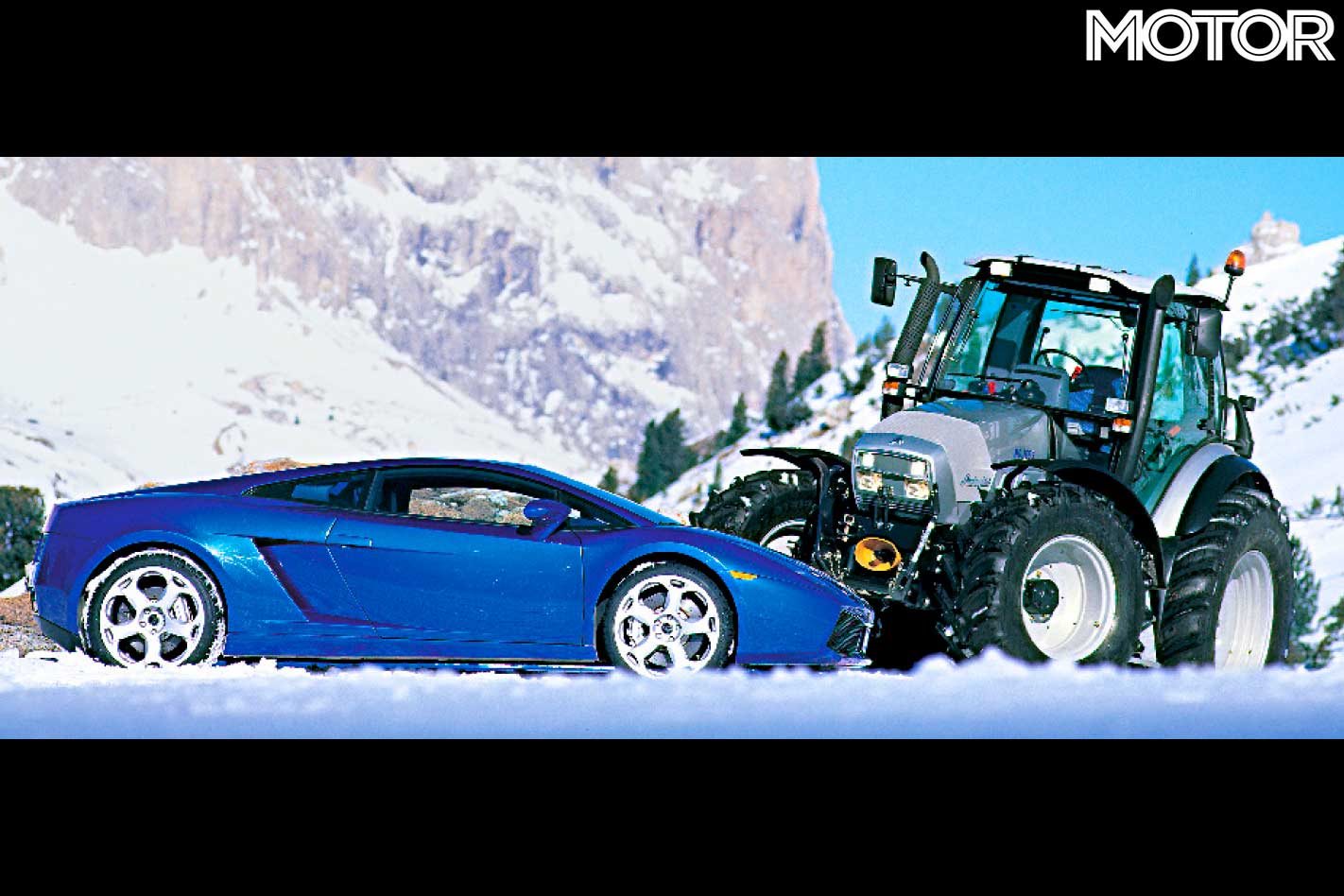 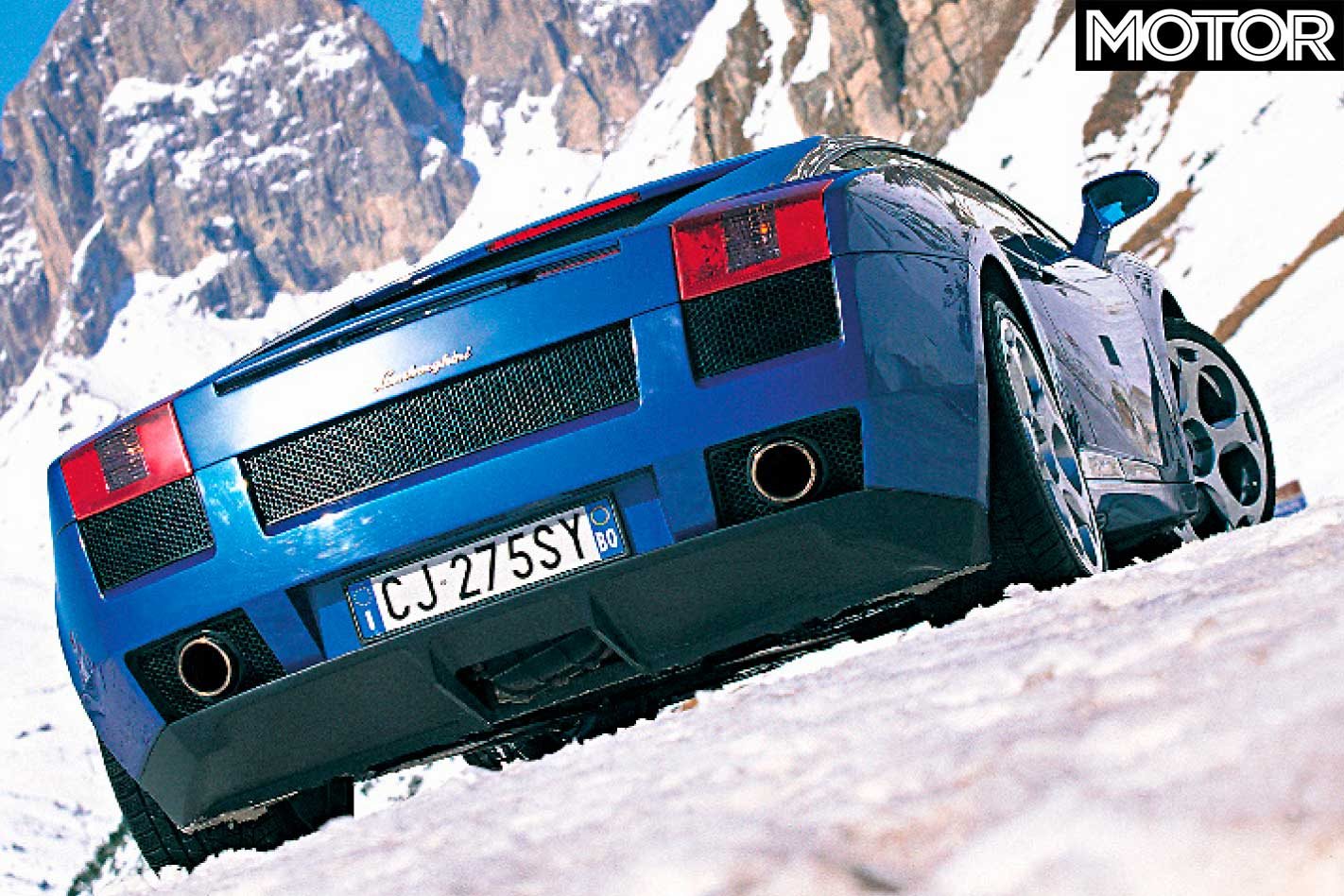