This is no ordinary car park. I’ve counted four Porsche 911 Rs, so far, the rumps of Porsche’s purist, stripped and striped limited series special sitting meekly in a forest of upright wing struts.

They’re attached to its more overt relations, countless 911 GT3s and GT3 RSs taking up the rest of the spaces, their vast wings at odds with the unadorned rears of those plentiful Rs. There’s a sole 911 Turbo S over there, too, though it’s sitting on 991 GT3 RS wheels, but even its wild Mango Green paintwork is unable to distract my attention away from the matte black machine parked opposite it.

I’m in Weissach, Porsche’s Development Centre, and that battle-scarred, black wrapped car that’s got all my attention is a Porsche 911 GT2 RS prototype. It’s happening then; Porsche’s fastest, most hardcore model is making a return after a seven-year break. It has been rumoured for a while now, but nobody’s been admitting the GT2 RS openly. This prototype has been spotted out a few times, though, and its matte wrap, tape and cladding hasn’t fooled anyone. Two massive tailpipes sit high above the currently covered, but very obvious, outlet for a rear diffuser, the intakes punctured into the rear wheel arches have additional cowls grafted on and the huge air intakes up front differ from those of even the GT3 RS. The intention might be disguise, but it’s really not worked.

Andreas Preuninger, Porsche GT department’s Head of Vehicle Projects, admits that the production car will look significantly different to the car here. The prototype is, as its looks suggest, a GT3 RS that’s been lovingly converted to the GT2 RS’s technical specification, there’s even hints of that car’s Lava Orange launch colour under that test worn ‘disguise’. Beneath the huge rear wing and engine cover there’s no longer a high-revving, naturally-aspirated 500hp 4.0-litre flat-six, in its place is slotted a turbocharged 3.8-litre flat-six pinched from the 911 Turbo S. 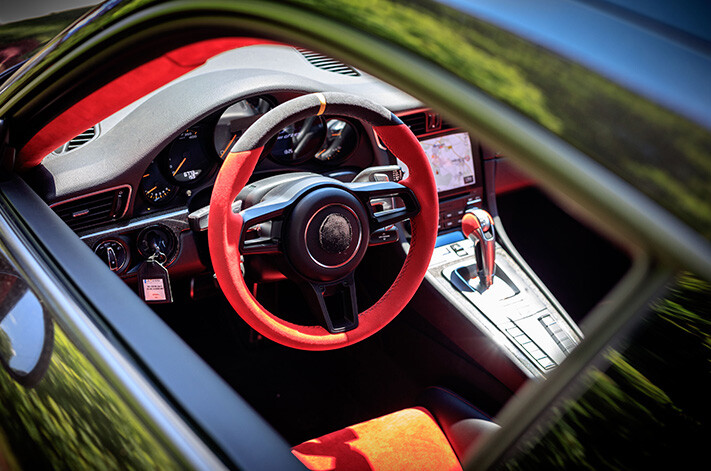 That explains the Turbo S in the car park then; it’s Preuninger’s current ride. He admits the Turbo S is ‘incredibly quick’, but adds that the GT2 RS will better it. He’s quick to point though that the GT2 RS is not simply a chipped Turbo S, saying that it’s running a bespoke exhaust and completely different turbochargers among many, many more technical changes. The key change to the engine, he admits, is a water-injected intercooler system, fed by a five-litre tank under the bonnet. That is essential in allowing the GT2 RS its sizeable leap in output over even the 580hp of that Turbo S.

Just how much that output is, nobody is prepared to say. “We have to be unusually tight lipped about technical data about the car, not because we don’t want to tell you, but we’re very limited by homologation, we’re very early, this isn’t a pre-production car, it’s a prototype. When we homologate a car it has to be homologated data proven by the agencies in Germany and we’re not at that point yet. I cannot legally tell you how much horsepower it’s got yet, I can only tell you that it’s got more than 650hp,” says Preuninger. That explains the single piece of A4 paper handed to me on my arrival with a vague collection of figures that Porsche can currently communicate. That 650hp power number tops it, followed by 750Nm for torque, both those numbers preceded by a greater than sign. Porsche is nothing if not conservative when quoting numbers. How much they will change is speculation. Given the GT2 RS’s reputation, and the might of the competition it’s gunning for, the percentage increase should at least be approaching, if not breaching double digits.

Preuninger says the GT2 RS is, after all, something of a riposte to some out there who accuse the GT department at Porsche of a slight loss of direction. “We’ve been under attack regarding lap times, all the time, and people keep telling us we’re only concentrating on old school stuff like manuals, feel and driveability, saying ‘that is only an excuse that you’re not fast enough anymore…’ this is proof positive that those people are completely wrong. We’re all about competition,” asserts Preuninger, underlining that the GT2 RS will be the measure of any rivals. Expect Walter Rohrl to be busy setting a lap time around the Nurburgring soon, then. If it’s to beat its competition it’ll need to better the 7 minutes 12 seconds the standard GT3 has just achieved. It will, easily, with an advantage of at least 150hp, 911 GT3 RS levels of downforce and a kerb weight quoted as under 1500kg. If it’s to better external competition like Lamborghini’s Huracan Performante it’ll need to be usefully under 7 minutes around Germany’s most famous ribbon of tarmac, and really, there’s no reason to see why it won’t be.

Not least because Preuninger admits the suspension is basically that of a 911 Cup racer, in Nurburgring specification. The linkages are all, bar one for the rear-wheel steering system, ball-jointed, there are upside down race dampers and the spring rates are significantly increased over those on the GT3. Double the amount on the front axle, and a huge increase in the rear, too. Even so, there’s civility to the ride quality, it unquestionably flattered by the smooth tarmac on the country roads around Weissach, Preuninger pointing to a lot of detail work on the dampers to get it to ride properly. The promise is, Preuninger says, brutal power mated to GT3 RS levels of agility and poise. Certainly the chassis feels, admittedly while sitting in the fixed back lightweight bucket on the wrong side of the car, like it’ll live up to that, the forces it’s generating in the laugh-out-loud sphere, grip levels are huge, traction assured. That’s helped by the 265/35 ZR20 front and 325/30 ZR21 rear Michelin Pilot Sport Cup 2 tyres specially developed for the GT2 RS, as well as the extensive, obsessive chassis tuning.

You’ll be glad of that sizeable rear rubber when you’re trying to exploit the 650+hp the GT2 RS brings, it following its predecessors by binning the front driveshafts and being rear-wheel drive. It is PDK only too, Sport PDK specifically, the paddle-shifted seven-speed ‘box essential on an RS badged car, asserts Preuninger, quite simply because it’s the fastest. It drives through an electronically controlled locking differential, while Porsche’s stability and traction control systems have been tweaked accordingly. As ever, there’s an off button if you’re feeling brave. There’s obviously aerodynamics at play, too, the wing at the back, pressure reducing vents above the front wheels, huge front splitter and a large diffuser. Those combined all help create GT3 RS levels of downforce, without impacting too detrimentally on its drag. Those NACA ducts on the bonnet don’t just accelerate air down to the PCCB composite brakes for optimal cooling, but additionally help clean up the airflow over the top of the car.

That air management, allied to the engine’s grunt, is enough to see Porsche quoting a top speed in excess of 340km/h. Getting there doesn’t take any time, either, with 0-100km/h quoted at under 3 seconds, that dictated by the sheer physics of traction, though above that it’ll monster to 200km/h, from standstill again, in comfortably under 9 seconds. Certainly the way the GT2 RS accelerates deep into three figures is genuinely shocking, as a run on the speed enlightened German autobahn demonstrated. Stability is incredible at speed, and equally so under heavy braking, the GT2 RS feeling racecar poised, pitch and roll not in its dynamic make up, yet without defaulting to harshness. It really is a different kind of experience to that of its GT3 and GT3 RS relations. As, of course, you’d expect it to be given its forced induction and the lower rev limit and more forceful torque delivery. The elasticity of its response and the physicality that it generates is reminiscent of the 918 Spyder, even if it can’t quite match the hypercar’s insane electrically assisted alacrity of response, at no point does it feel anything but brutally rapid. The numbers racing up the speedometer seem barely able to keep up with the surfeit of energy that the significantly revised 3.8-litre engine delivers.

As the traffic around us apparently speeds into reverse as Preuninger once again enjoys the engine he and his team have worked so hard on the cabin is filled with a sound that’s very un-turbo, predominantly exhaust generated, but a good one. It is switchable, too, the button in the centre console quietening it down, a bit, though Preuninger says he finds it amusing that with the flaps open those huge exhaust pipes give the rapidly shrinking traffic in the rear-view mirror a view of the orange glowing catalysts. 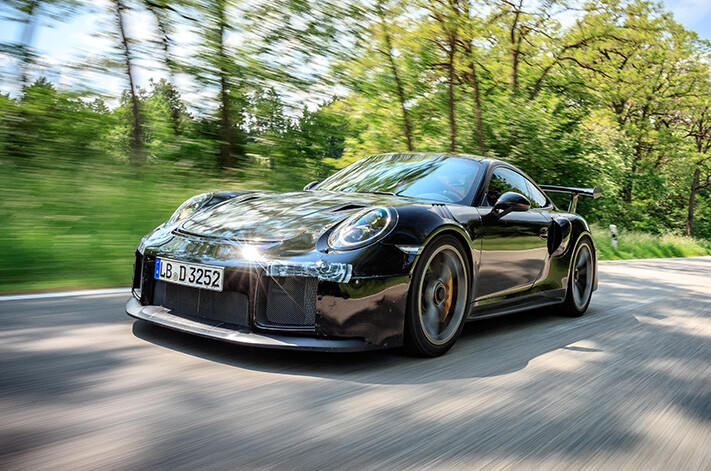 Preuninger admits they’ve not removed quite as much sound deadening as they could, the GT2 RS’s power such it’s just not necessary to remove every possible gram of weight from it. Likewise, the glass in the back is replaced by the same sort of glass that’s used on mobile phone screens, rather than Perspex.

There are obviously weight savings, after all the GT2 RS is a sub-1,500kg car, and there’s the opportunity to make it lighter still. Porsche offers it with the free option to remove the air conditioning and entertainment system, as well as a Weissach package like the 918 before it. Nobody will do the former, while that Weissach pack is likely to effectively be standard fit.

Choose the Weissach package and you’ll drop 30kg from the overall mass, a titanium roll cage dropping 7kg, carbon fibre elements in the suspension a further 5kg and, more significantly, 12kg is removed from the unsprung mass by the fitment of magnesium wheels. While the wheels add the exotic metal to the mix it’s removed elsewhere, the magnesium roof so lauded when introduced with the GT3 RS is replaced on Weissach-equipped GT2 RSs with a carbon fibre one.

Those Weissach cars will look different again to the already overt standard car, that predominantly down to the differing wheel design, the GT2 RS promising a wilder look, as is befitting of its status.

What’s clear, from an all too brief first chance to experience it, is that the GT2 RS will reinforce the legend that precedes it. As Preuninger says: “it’s our king, it’s our road hero and it should be visible that it is something special coming along.”

It will be, assuming it’s not going so fast you’ll miss it, as there’s every chance it will be. With pre-series cars coming down the line in June it’ll not be long before we can add some figures to properly define the madness, until that happens just think up a number, and the chances are the GT2 RS will better it. Which is exactly as it should be.