Australia’s car-manufacturing industry has been revived by an unlikely source.

Brabham Automotive has revealed its BT62 track-only supercar will be built in a 15,000 metre-squared facility in Adelaide. The BT62 was revealed to the world at Australia House in London, the venue reflecting the project’s “Anglo-Australian” roots, according to Brabham Automotive Managing Director David Brabham, son of three-time F1 World Champion, the late Sir Jack Brabham. 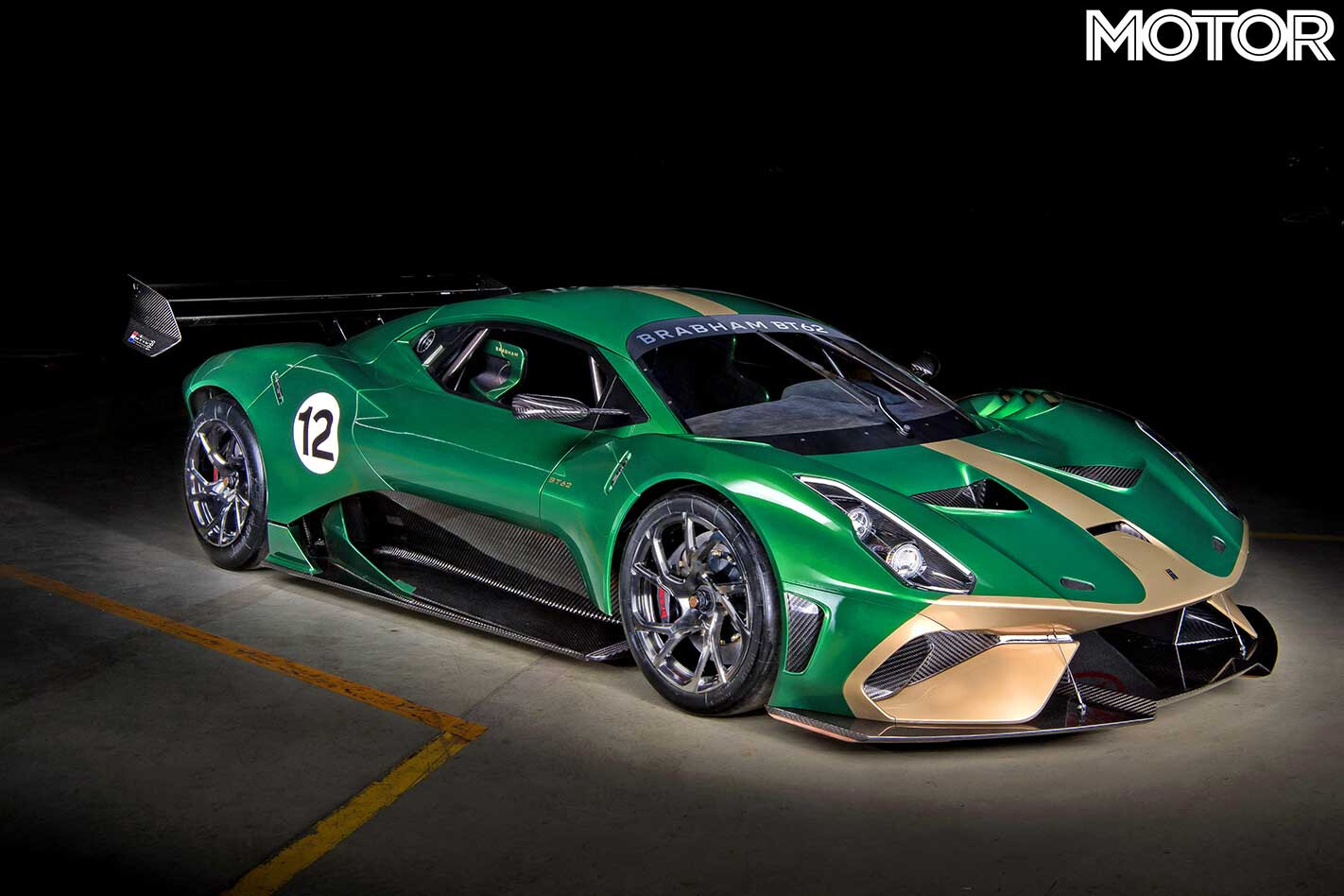 The car itself is designed to offer the ultimate in track performance, developed using Brabham’s 35-year experience in top-flight international racing. Unlike many of its rivals, the BT62 eschews carbon construction for a tubular steel spaceframe, though the body panels are carbon fibre and the wheel housings carbon-kevlar.

According to Brabham’s Engineering Director, Paul Birch, the spaceframe construction was the easiest way to ensure the BT62 will meet the World Endurance Championship regulations, as Brabham intends to race at Le Mans with the BT62 or a derivative of it. Dry weight is just 972kg, while in overall size the BT62 is similar to a McLaren 720S.

Outright horsepower was apparently never a target, however, with 522kW/667Nm the Brabham’s 537kW/tonne power-to-weight ratio is competitive with the likes of the McLaren Senna GTR (510kW/tonne) and Pagani Zonda R (522kW/tonne), if some way short of the 818kW/tonne promised by the likes of the Aston Martin Valkyrie.

How the BT62 achieves these outputs is quite remarkable. Its 5.4-litre V8 doesn’t rev particularly high – peak power is produced at 7400rpm – and its 10.5:1 compression ratio isn’t anything unusual, so to produce almost 100kW/litre is quite a feat. Other atmospheric engines that approach the magical 100kW/litre mark, such as the Porsche 991.2 911 GT3 or Ferrari 458 Speciale, use much higher compression ratios of 13.3:1 and 14:1 respectively.

Brabham is remaining tight-lipped on the engine’s origins, saying the degree of modification is such that it’s best thought of as a ‘Brabham’ V8. However, it seems to that Ford’s ‘Aluminator’ crate engine has formed the basis, an extra four millimetres of stroke increasing capacity from 5163cc to 5387cc.

Nonetheless, the Aluminator’s off-the-shelf outputs of 433kW/603Nm suggest Brabham has indeed done an enormous amount of its own development.

The engine uses dry-sump lubrication, sexy individual throttle bodies and is E85-capable, while feeding the power to the rear wheels is a pneumatically-actuated Holinger six-speed sequential gearbox, with gearchanges requested by a pair of steering wheel-mounted paddles. No performance figures are quoted as the BT62’s sole focus is the lowest possible lap time.

An extensive aerodynamic package, consisting of a front splitter, aeroblades and canards, barge boards, rear diffuser and dual-element wing, is capable of developing 1200kg of downforce (a conservative figure, according to Brabham), making maximum use of the standard Michelin slicks, which wrap wheels measuring 18 x 11.0-inch at the front and 18 x 13.0-inch at the rear.

Brakes are all-carbon by Brembo, using 380mm and 355mm rotors front to rear respectively with six-piston calipers at both ends. Virtually everything on the BT62 is configurable, from the assistance of the electric power steering to the dampers and anti-roll bars to the ABS and traction control systems.

Much of the development was carried out at Phillip Island, Brabham impressively managing to keep the project completely under wraps despite hiding in plain sight. According to Brabham: “The Brabham BT62 has been designed and engineered to demand more from its driver. It’s a car for those who want to challenge themselves and their limitations to experience driving in its purest form.”

As such, included in the £1m (AUD$1.8m) price is a place in Brabham’s driver development program, which aims to ensure those who wish to use the car for its intended purpose will be able to extract the most from it.

Just 70 BT62s will be built to represent 70 years since Jack Brabham first began his motorsport career, with the first examples expected to be delivered before the end of 2018. Left-hand drive is standard, but right-hand drive can be accommodated. It’s believed at least a handful of cars will remain in Australia.

The first 35 cars will be painted in liveries which celebrate the 35 wins achieved by the Brabham F1 team in its various guises. The green and gold of the launch car represents Sir Jack Brabham’s victory in the 1966 French Grand Prix, the first of four victories in an historic season which would result in the Australian becoming the first – and only – person to win an F1 championship in a car of their own manufacture.

The BT62 is intended to be merely the first chapter in the revived Brabham story. As mentioned, the next step is for the BT62 join the GTE ranks at Le Mans, however, in order to qualify a road car must be produced.

According to Brabham, despite its track-only status a lot of the work on the BT62 has been completed with road homologation in mind, including functional lights and road-spec wing mirrors. Brabham appears to be following the model established by Ford with its GT, creating a competitive racecar first and reverse engineering it for the road.

“I set out 12 years ago to re-establish the iconic Brabham name,” Managing Director Brabham said, determined to see a return to global competition. “My father had an incredible determination to succeed and, like him, I’ve worked tirelessly through this time. It’s been challenging at times, but today’s unveiling makes me feel incredibly proud as the Brabham legacy enters a new era.”

2004 - Joss JT1
So much promise, but funding couldn’t be found. Appears in a number of XBox games.

2005 - Redback Spyder
Two examples built, one of which resides in the US. Powered by LS1 V8.

2011 - AJF1
‘AJ’ stood for Alan Jones, who was reportedly involved in development. Sank without a trace.

2015 - Quantum GP700
Like the Skelta, a finely honed chassis, supercharged Honda engine and ugly as sin.