The first time I ever saw inside an engine, I was standing in a pool of oil by the side of the road, staring horrified through the gaping hole in the side of my car’s cylinder block.

This article was originally published in the August 2002 issue of MOTOR.

One minute I’m sailing along in top gear, tacho pointing north, the next, there’s a bang big enough to father a new universe.

The old girl had snapped a gudgeon pin, fired number three piston into the open exhaust valve (shutting it permanently) the con-rod had tangled with the cylinder wall and snapped in two with the bigger half launching through the side of the motor, knocking the engine mount off the cross-member and even snapping the centre main-bearing cap. But, flying in the face of generations of Morley tradition, I did learn from the sickening experience. And what I learned was that if you’re going to drive like a total nobber, you’d better start learning about rebuilding motors. Fixing them follows blowing them up follows thrashing them. It’s a night/day thing.

So, yeah, I still do my own servicing, I kind of know my way around a Holden red motor and I’ve rebuilt the odd air-cooled motorbike engine (four valves per cylinder might be sexy in the brochure, but it’s a different story when you’re lapping in valves by hand). And let’s not forget that when it comes to bolting together a 250kW stroked Windsor, I’m no more qualified to reach for a torque wrench than yer average NRL cheerleader.

See, you can’t just throw a long-leg Windsor together from 10 metres away. If you want it to hang together and produce its full 250kW, it needs to be assembled by somebody who knows what’s what. 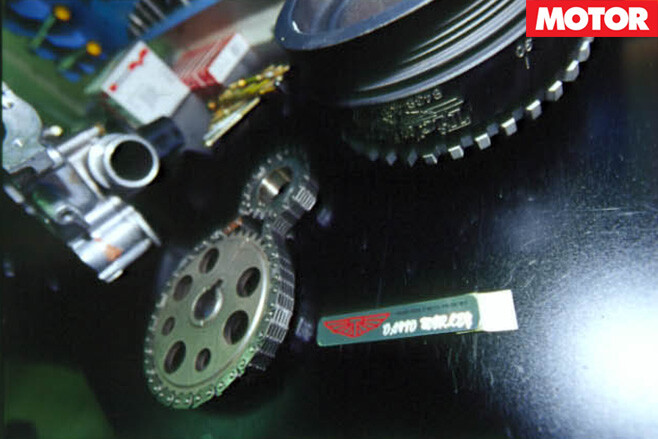 In the world of engine assembly, I don’t know what day it is. None of which explains what I’m doing in one of Tickford’s fashion-victim aprons, up to my bolts in nuts with a half-finished 5.6-litre Ford V8 cringing as it awaits my next move.

See, MOTOR is taking delivery of a TE50 long-termer and Ford’s comedy relief team (aka public affairs department) figured it would be a good idea if one of the blokes who would eventually thrash the TE’s tatters off had a hand in building its powerplant. Eeek.

By the time I arrive ... late ... Tickford’s ace engine man, Phil, has already got everything laid out and the engine up to short motor stage. That is, the crank, rods and pistons are all assembled and torqued, but I still get a feel for the bottom-end balancing process by messing about with the crank and rods of another engine (two stuffed motors for the price of one, then). 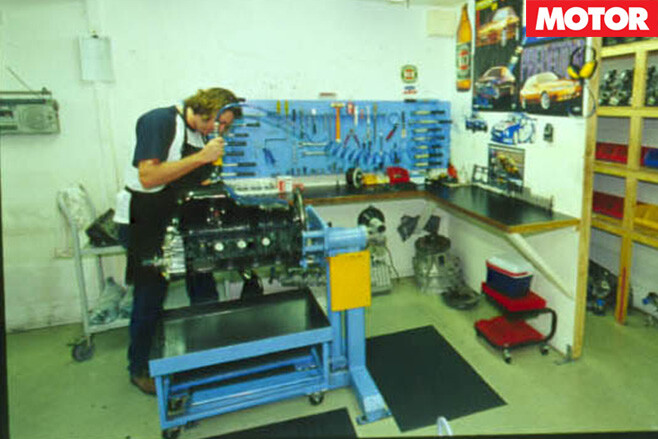 So much for ‘here’s one we prepared earlier’ anyway, because it’s now down to me to get ‘our’ stroker to long motor stage. As in ready to install in the TE50’s engine bay, hook up the spark and fuel and boot it in the slats. So, less yappin’, more spannerin’.

The camshaft is the first thing to slide in and I manage to smack the lobes into every bearing as it disappears into the bowels of the Windsor. Phil can do it one-handed, like he’s sliding a knife into a fruit cake. Bastard.

The harmonic balancer goes on next and is torqued to a set value which remains a mystery to me. See, here’s the clever bit: rather than use a single torque wrench which needs to be reset for each job, Phil and George (Tickford’s stroker dudes) have a specific torque wrench for each stage of the assembly. Head studs? Use the head-stud wrench. Lower manifold? Use the lower-manifold wrench. You get the idea. The sump goes on next and Phil uses Silastic sparingly in strategic spots. Take note home engine builders: if some Silastic is good, more isn’t necessarily better. The engine is flipped over on its stand next and the head gaskets slung in place.

On go the heads and the studs are torqued in a specific sequence, twice with the first torque wrench (to allow for the gasket compressing) a third time with the second wrench set at a higher value and a fourth time with a breaker bar that adds a final quarter of a turn to each stud.

The roller-tipped hydraulic lifters and push-rods are slid into their holes (there’s probably a more technical term, but ‘holes’ works for me) and the roller rockers bolted up in pairs according to the engine’s firing order. The lower manifold – which carries the fuel injectors – is bolted up next and then the upper manifold (which is a 200kW item and will be changed once the engine is fitted to the car. Weird, but that’s the necessary interface between an assembly-line car and a hand-built engine) is torqued down.

Rocker covers and exhaust manifolds go on now and finally it’s stuff like the loom fitted and the injectors clipped into it, some sensors hooked up and spark plugs screwed in. 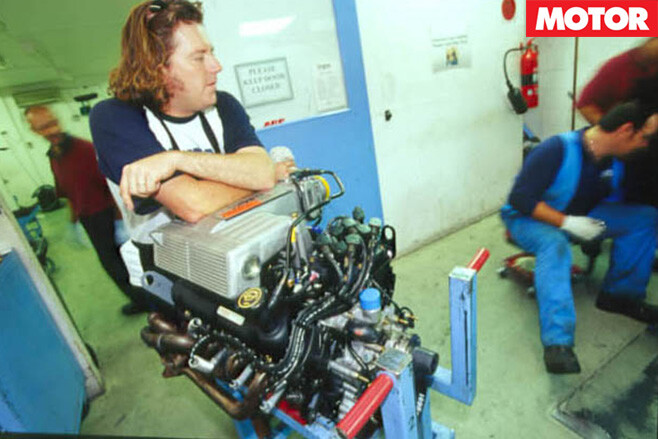 Phil stands back and watches me stuffing up the last few bits and declares the job complete. The natty little plaque naming me as the engine builder is applied to the rocker cover and it’s done. I’m not sure I like the blame-trail developing here.

A cheeky little work experience kid pushes over a trolley, the engine is dropped off its stand and I wheel it out to the test bench like a nurse who’s just delivered a screaming sprog.

An enormous bloke I know only as Sir hooks up the exhausts, electronics and fuel, looks at me like he sees engines blow up every day, and pushes the button that spins the starter motor. And bugger me; it runs. It’s a bit tappety – despite priming the thing during assembly – until the oil pumps up the lifters, but it runs evenly and doesn’t make any spooky, knocky noises that indicate a piston is trying to get out.

So, now there’s no turning back. If it blows up it’s either because the MOTOR boofheads in general killed it deliberately or this large, hairy boofhead in particular screwed it together all wrong.

Christ, I hope it hangs together. And in that sentiment, I suspect, I’m just like any engine builder anywhere in the world.

The Morley masterpiece finds a home

So Morley built this thing. They’re a hardy lot, Ford staffers. Four years of the AU hasn’t dimmed the collective sense of humour. The redoubtable Mr Flint and his troops have gathered to make sure the mill at least gets the TE off their land before it shits, which just leaves a Melbourne-Sydney drive to run it in. They’re casual about it, too. Nothing specific for this engine/gearbox/drink holder package, save staying off racetracks for a month or so.

Still, big throttle and big loads at low to middling revs is the accepted wisdom. Oh, and don’t let it sit on one opening for too long. Hence the fuel consumption figures. So if you followed a TE50 up the Hume that lonely Thursday night in June, now you know. That incessant dropping to 50-60, BWOOOAAARRing to 110 and back again wasn’t just to hear the noise. Or was it?