Armoured cars so cool, you'll wish you had a bounty on your head

Bulletproof cars are big business and a must-have accessory for the rich and powerful. Here are five we’d like to see in our, presumably vast and opulent, garage

YOU’VE made the one-percent, congratulations, but on your quest to get there you've inadvertently made a few enemies. Ergo, you now have a slightly elevated chance of dying in a hail of M-16 fire on your way to the airport.

You have some options in front of you - start being nice to people, or buy a car that’s a grenade-proof living room on wheels. Given the existence of a thriving armoured car industry that sells more than 100,000 bulletproof vehicles globally, it's clear which direction the world's dirty-rich would rather go.

There's all manner of toughened-up cars designed to prevent everything from sustained AK47 fire to gas attacks, ranging from inconspicuous (but invincible) Toyota Camrys to futuristic para-military styled vehicles that repel would-be assassins through sheer ugliness ... and the ability to carry a military-spec minigun.

So how do you convert a car from a delicate petal that will screw your insurance premium if you hit a bollard, to a badass daily driver that sees landmines as a minor inconvenience?

At the very least you need to replace all windows with ballistic protection glass and install armour panels, made from materials such as Kevlar, behind all bodywork including the roof. It’s also handy to fit bomb-blast-absorbing floor protection, run-flat tyres, anti-explosive gas tank, a satellite phone for emergency communications, and perhaps a siren or air horn to attract attention and spook your assassins.

Inspired by the new bulletproof Skoda Superb wagon, we’ve come up with a list of some of our favourite armoured cars to feature all that kit, and then some. 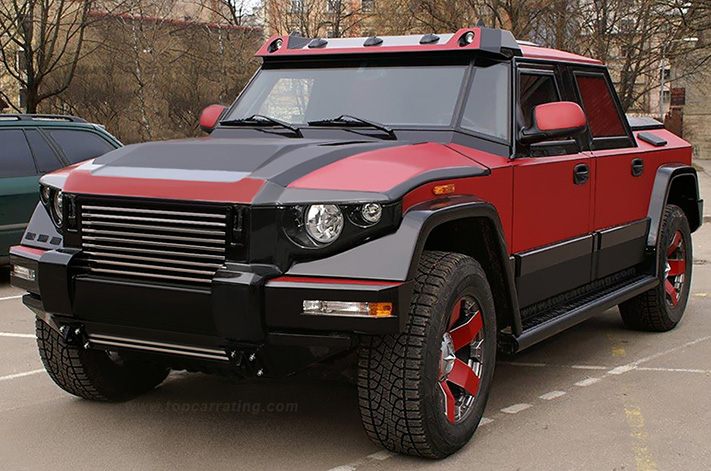 The paradox with the Dartz T-98 Kombat is that it requires armoured protection because the mere act of driving something so visually offensive in public is to invite being shot in the head. 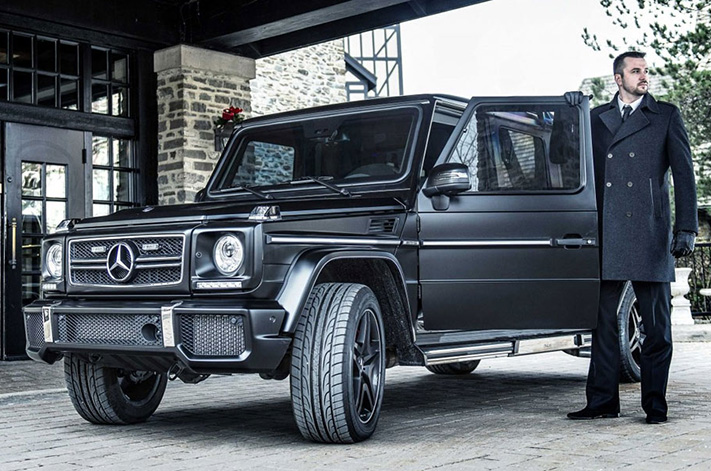 This stretched G63 expands on the G-Wagon’s bulletproof reputation, while toughening up the floor to withstand the blasts of up to two grenades. Modified by Canada’s INKAS Armoured, it has security cameras to provide perimeter surveillance and a luxurious rear cabin featuring a built-in speed-pistol holder, along with less hostile features such as heated and cooled captain-style rear seats with massaging function, satellite television and a bar.

We can think of worse things to spend $US1 million on. 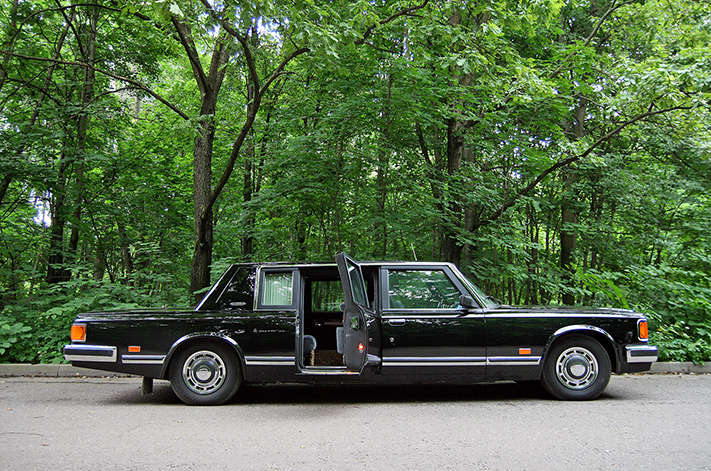 Russian president Vladimir Putin has taken delivery of the new Rolls Royce-inspired Kortezh armoured limo that looks all stately, but isn’t a match for the old ZIL-41052 that was so squarishly manly even Putin himself thought was a bit much.

Twenty-two 41052s were built and one was up for sale in 2014 with 8-10mm thick body armour and bulletproof glass. With a 6.2-metre body almost as long its full name, the ZIL was designed to absorb as many bullets as possible as evading attackers wasn’t really an option – with a 5500kg kerb weight, its 231kW 7.7-litre V8 engine could only manage 0-100km/h in 13 seconds, on its way to top-speed 190km/h. 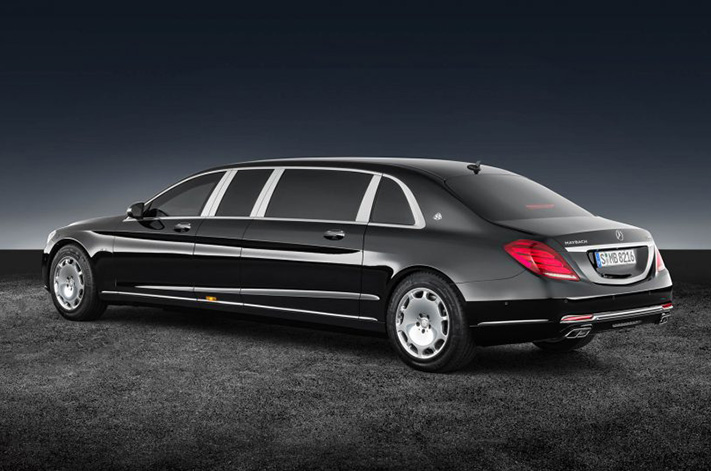 Benz has turned its opulent land yacht into a frigate that’s certified to VR10 ballistic protection, which is the highest level for civilian vehicles. Protection begins with its underpinnings, with ‘special steel’ used to reinforce the structure and bodywork so it can withstand sustained assault rifle fire, as well as blasts from the side and underneath. It also has an undisclosed series of technical features that help it keep driving after it’s attacked.

The Pullman Guard is designed so it doesn’t look any more ridiculously conspicuous than the standard Maybach S600, with the powertrain and suspension tweaked to cope with the extra heft. 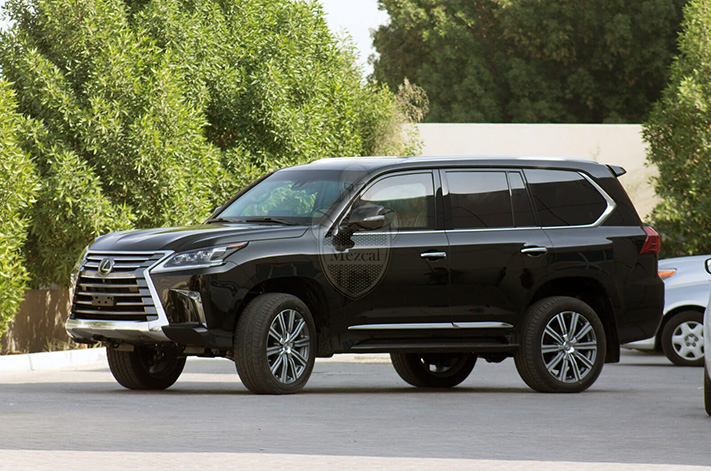 This is perfect if you want to tow a caravan in style, enjoy a commanding ride height, or wish to prevent Boko Haram rebels from kidnapping your daughters during the school run. Dubai-based Mezcal have added multi-layered ballistic glass, armour plating, reinforced pillars, heavy duty door hinges, run-flat tyres, and modified suspension and brakes to the standard LX 570 so it looks like bloody big tank … just like the standard LX 570.

There really isn’t much aesthetic difference to the standard model, until you open the tailgate to reveal a second hatch that looks like it was stolen from an armoured personnel carrier - and presumably makes loading the shopping a little difficult. 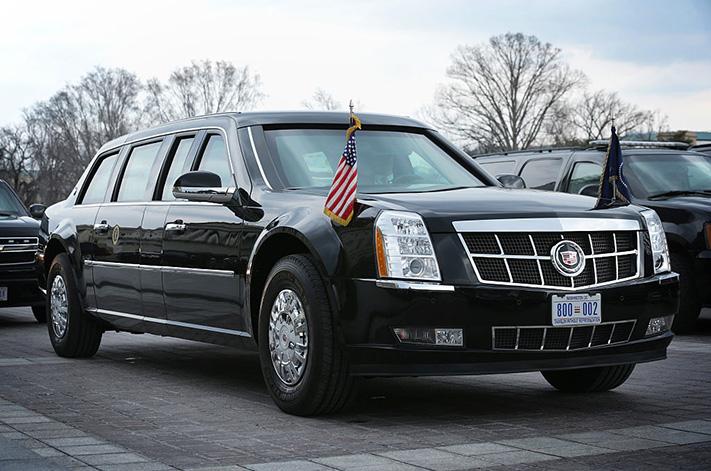 Code named Stagecoach and also known as ‘The Beast’, Cadillac One and Limousine One, is the current official car of the President of the United States and went into service in January 2009 in time to take President-elect Obama to his inauguration. Designed by the Secret Service and built from the ground up, about the only thing about The Beast that’s Cadillac is its badge.

Described as a truck that looks like a limo, it features military grade armoured panels, armour plated fuel tank encased by rupture proof foam, a halon fire suppression system, separate oxygen supply, medical equipment including vials of the Commander in Chief’s blood type; Kevlar-reinforced Goodyear run-flats and night vision cameras mounted inside the grille. The cabin is sealed to prevent the effects of a chemical weapons attack with 8.0-inch doors (and 5.0-inch windows) that need to be opened from outside.

The Beast is being replaced with a new, and delayed, model for President Trump that will be better – there will be none better than this new one.

Here’s a bonus vehicle that’s more armed than armoured. The Beast is pretty great and all, but the coolest vehicle in the presidential motorcade has to be the GMC Yukon XL, which has a more offensive approach to fending off attackers with an M134D Gatling gun that pops up through the roof with the gunner, who can swivel it 360-degrees.

The M134D is an electrically-driven six-barrelled mini-gun that spits out 3000 rounds of hot led per minute with a hellish ‘paaaarrrp'. The gun spits out so many expired casings that the driver has to use the windscreen wipers to see through the brassy rain.

Who says SUVs can’t be cool? 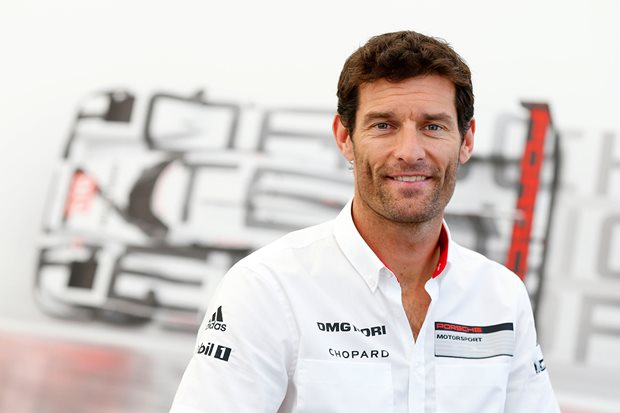 Mark Webber: Beyond the Circuit

Mark Webber speaks of his life after Formula 1... and how Aussie drivers give him the grits 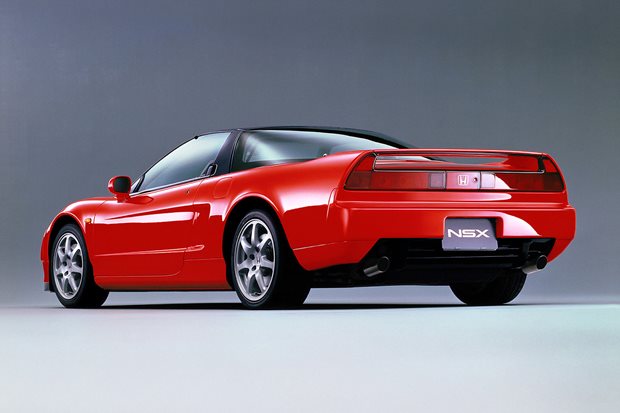 And why the 25th anniversary of the “golden era’ is significant 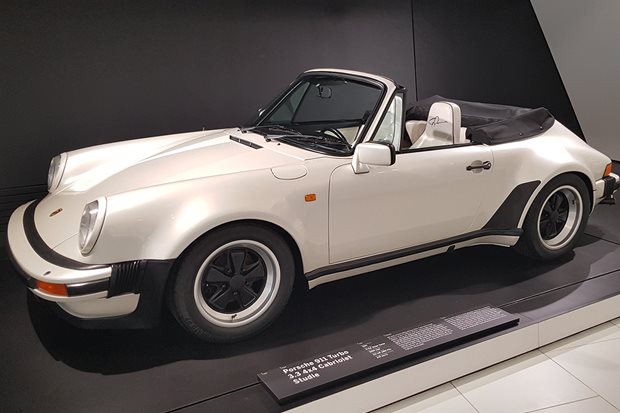 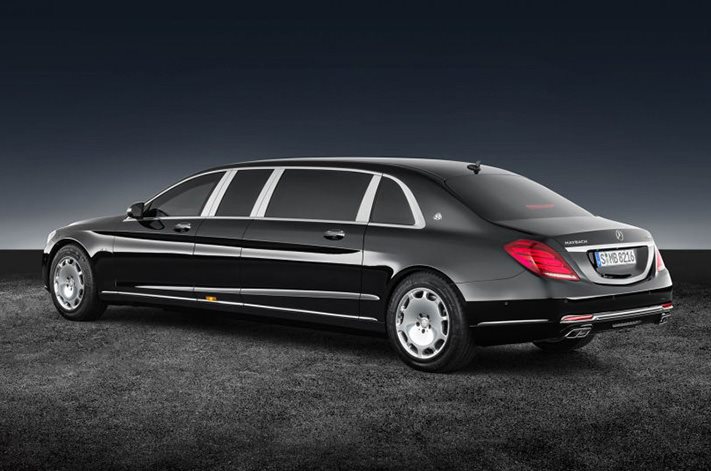 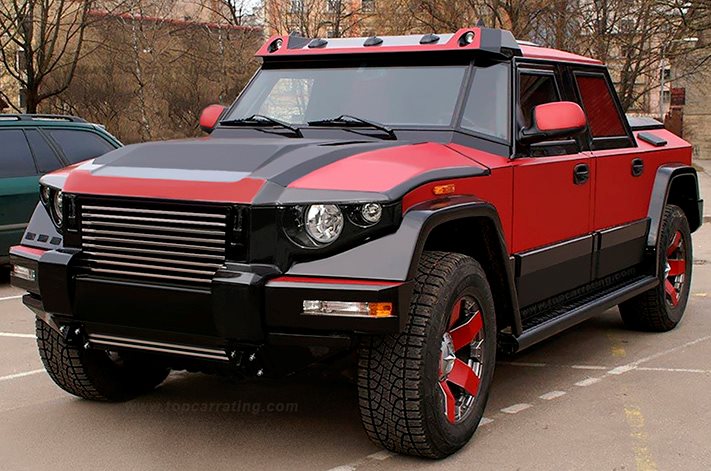 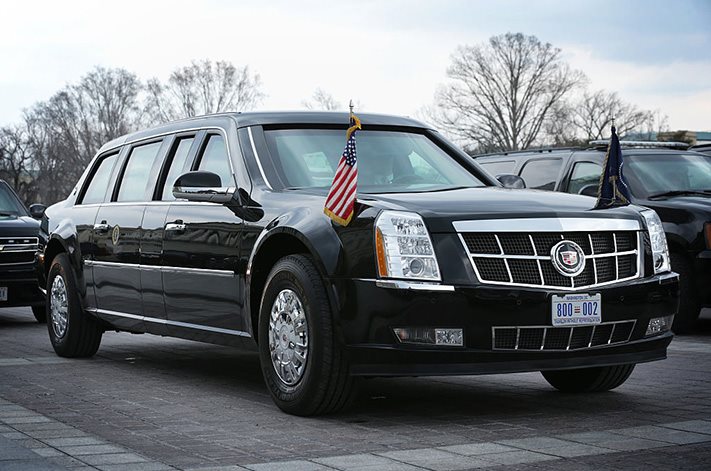 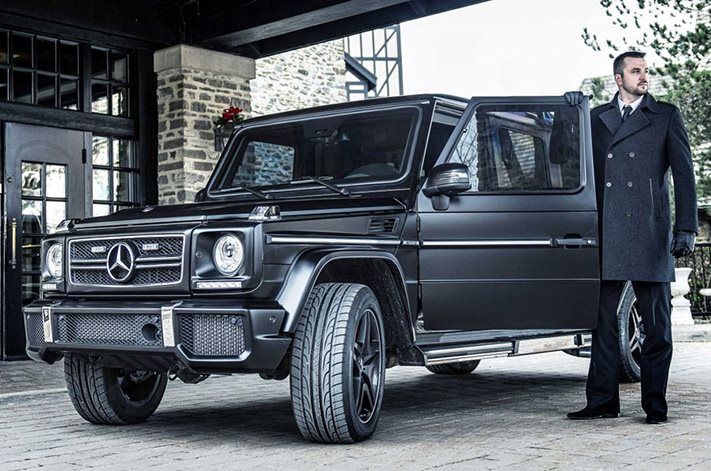 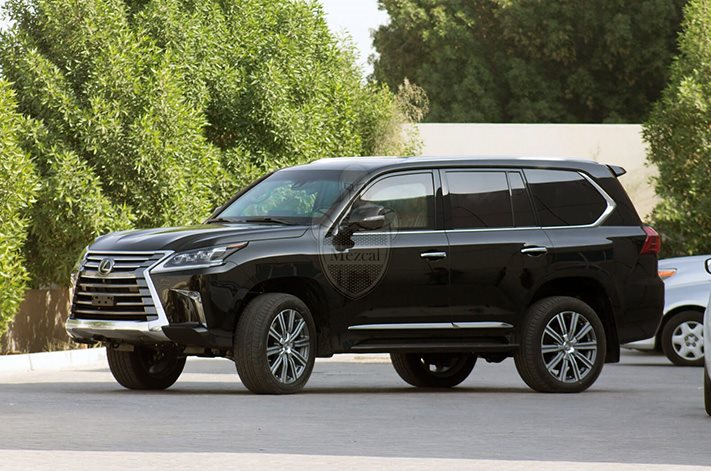 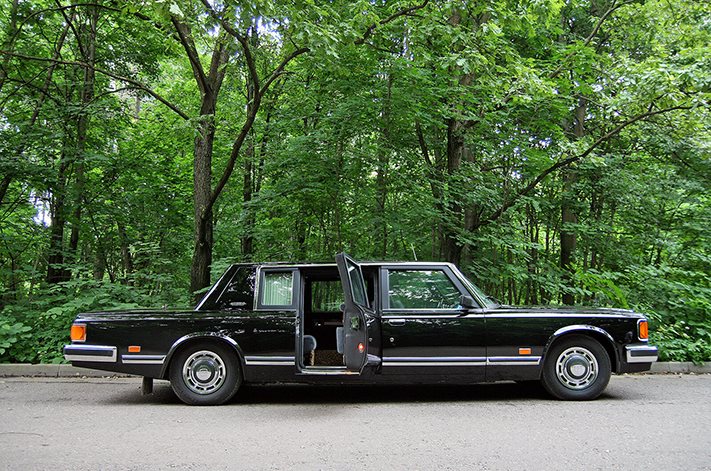