At last! We drive the long-awaited Honda NSX

Honda springs an unexpected first drive of its greatly anticipated NSX, and now we can swear it’s a seriously impressive supercar.

Honda springs an unexpected first drive of its greatly anticipated NSX, and now we can swear it’s a seriously impressive supercar.

ONLY a proper supercar can make you swear involuntarily and produce actual shock and phwoar at its performance. The new and looong-awaited Honda NSX is a proper supercar, then, as we’d dared to hope it would be, despite being powered by a mere V6 (and three electric motors, including one for each front wheel).

Honda yesterday sprung a surprise drive of the new NSX in Japan, where we’d flown to drive its more austere products, and Wheels was first out of the pits onto the high-speed bowl at its Tochigi proving grounds in the sleek new supercar.

Our first impression was of dazzling, dizzying speed, but the “holy shit” moment came half way through the second lap when my factory co-pilot insisted I slow down to 50km/h on the straight, switch back from manual mode to Drive and then plant it.

The combination of the full torque from zero rpm electric shove of the three motors with a typically howling Honda engine – an all-new 3.5-litre twin-turbo V6 – is enough to push the swear words out of your chest along with all your oxygen. The delighted Japanese engineer in the passenger seat responded to my rude outburst only with, “Yes, thank you, thank you!” 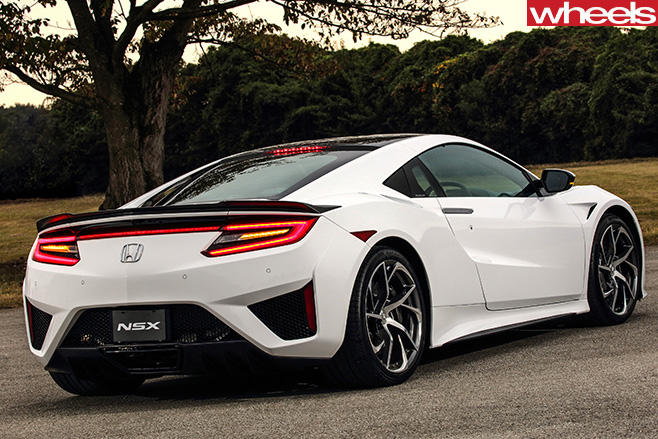 Honda won’t say exactly just how fast the NSX is, yet, but its claims of superiority over what it considers rivals – the Porsche 911 Turbo, Audi R8 V10 and Ferrari 458 – are intriguing.

Chief engineer Ted Klaus says 0-100km/h times are pointless because “everyone measures them in different ways”, which is not exactly true, and also claims that numbers aren’t important, yet he’s happy to say his car is faster than all three (for the record, the Porsche gets there in 3.2 seconds).

He’s also keen to claim that the NSX is up to 300 percent more torsionally stiff than its competitors, an astonishing figure. So is it faster than the new Ferrari, the 488 GTB? “Wow, that thing’s a beast, huh?” the enthusiastic American nods.

Translation: “We really didn’t expect them to make a car that fast, so we’ll keep comparing ourselves to the 458 instead, thanks very much.”

That means the NSX, with its combined total of 427kW and 646Nm in a car we now know weighs 1725kg, is probably capable of something just over three seconds, but you can bet it’s quick to 200km/h as well.

The new engine features pistons with cooling galleries, in-cylinder direct injection and port injection, and a dry-sump system, with everything focused on delivering a low centre of gravity. 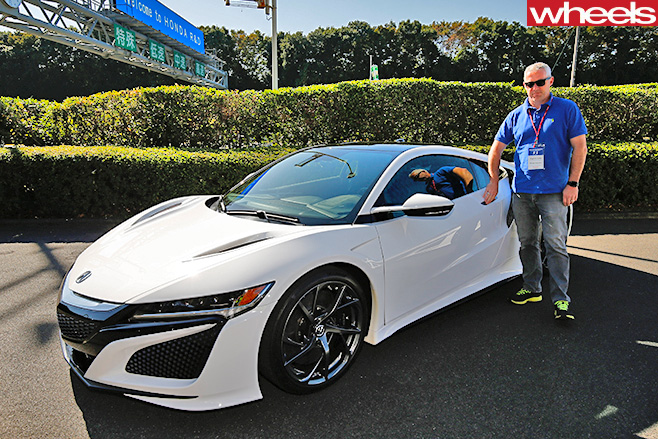 A crankshaft-mounted Direct Drive Electric Motor provides more shove from the rear, a Twin Motor Unit apportions power to each of the front wheels and just behind the passenger’s seat is an Intelligent Power Unit (IPU) providing the computing grunt to apportion all this power appropriately.

The whole thing also runs through a new nine-speed dual-clutch transmission, which is basically a seven-speed with a launch gear and an overdrive.

The specs, it seems, are just as outrageous as we’ve been led to believe, as is the construction, which features super-slim A-pillars, world-first ‘ablation-cast aluminium’ and ‘3DQ ultra-high-tensile steel’.

But what’s it like to pilot this motoring moonshot?

“We’re very sorry, but because there are so many drivers here from around the world we’ve had to impose a speed limit of 180km/h.” This announcement from a deeply bowing Honda official is greeted with slightly stifled titters. Even when they’re being mildly racist and suggesting that foreigners can’t drive, the Japanese are polite about it.

Obviously 180km/h sounded like it would be fast enough to give us a reasonable impression of what the car can do, but in actual fact it’s a number we reached halfway into the first deeply banked bend, with staggering, stupid ease. 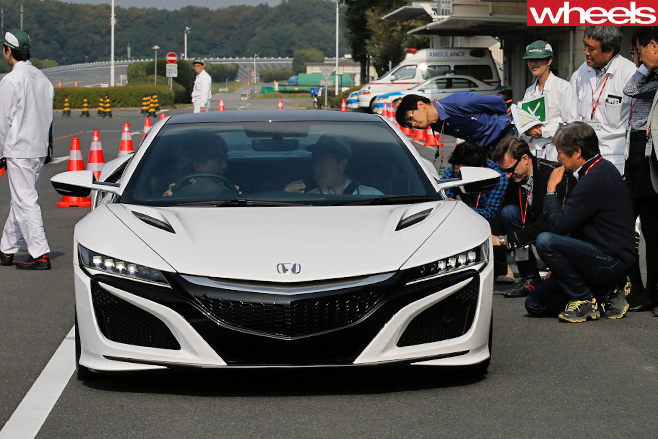 Honda had also speed-limited the software so we couldn’t sneak past 180 and get closer to the NSX’s top speed of 310km/h.

Klaus says the NSX is about more than numbers, which is what people always say when theirs aren’t the biggest, but he has a point because it’s what lies beneath this vitally important halo Honda that makes it genuinely unique, and should make it a ballistic beast on the road.

Its design brief is to be what its predecessor was, an everyday supercar that can be driven with ease by anyone, but one that will “respond vividly to the most skillful drivers’ inputs”.

The shape of the NSX, which has graced multiple motor show stands for seemingly the past 50 years, may not be as exciting as a 458, but it’s all about the aero package and it feels fantastically planted to the ground, even at ‘only’ 180km/h.

The steering also feels race-car heavy and pointed at the same time and is reminiscent of the Lexus LFA. It’s entirely unlike any Honda I’ve ever driven.

What it also promises, with its almost embarrassing SHAWD acronym (Super Handling All-Wheel Drive), is- something that prompts that word again; unique. 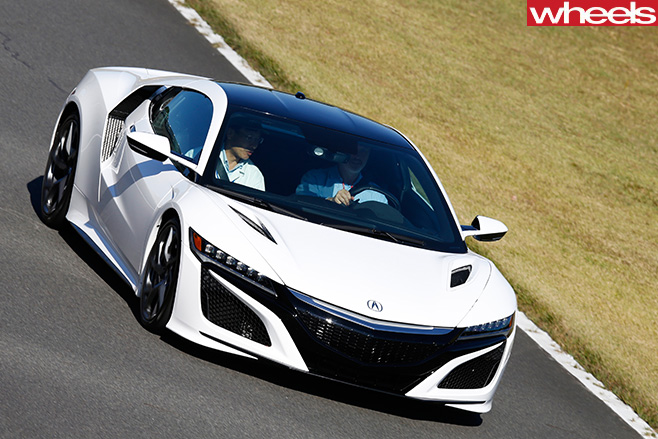 Klaus says its ability to use the motors inside each front wheel to provide a kind of direct-feed torque-vectoring system with electronic yaw control will deliver a whole new kind of cornering experience.

“It will give you the kind of precise line-tracing that will be just amazing; you will look at the apex with your eyes and the car will follow – this is what we mean when we say cornering like it’s on rails,” he enthuses.

“What we’re looking at here is a whole new kind of car.”

It’s a bold claim, and one we can’t wait to test on the road, but our track experience certainly suggests that the new gearbox is super-slick, the acceleration is remarkable to the point of profanity, with the numbers on the colourful digital speedo blurring in an appropriately Japanime style, and the whole car feels compellingly complete, solid and technologically advanced.

Combining the modern electro-shock shove of a Tesla with the famous screaming grunt of a Honda engine – albeit one that’s just slightly lacking in supercar-sound terms – makes for a car that could just be worth all the waiting.

Australian buyers, some of whom have already slapped down deposits without even seeing the specs – or the still-unannounced price – will be able to find out next year.

I’d swear, loudly, that they’re going to love it.