Audi S1 at the Nurburgring

What’s faster around the Nurburgring, a supercar or a superdriver in a humble hot hatch? We sent John Carey and some bloke named Winkelhock to find out

IT’S possible Markus Winkelhock thinks I’m the nervous type. “For today, I have been told zero risk,” the racer tells me as he pinballs from one Nordschleife kerb to the other at the opening of his first lap.

On the other hand, it could be that the two-time winner of the 24 Hours of Nurburgring wants to put a pre-emptive excuse on the record, just in case someone manages to put a shame-inducing overtake on him. If there’s risk today, this is it...

Small, powerful, agile cars are often labelled ‘Giant Killers’. It’s one of the clichés of motoring journalism, thoughtlessly applied but seldom, if ever, tested for truth. But what would happen if something quick and compact was taken to a place giants gather? Even with a professional pilot in the driver’s seat, would titans be toppled? Or not?

The venue had to be the Nurburgring’s Nordschleife, on a public day, when owners (and renters, too) queue to buy tickets allowing them to savour speed and display daring. Surely some of them would bring heavy metal to the legendary track.
There are supercar owners. There are supercar drivers. But these are not always the same person.

It’s obvious that the means to purchase an exotic is not invariably accompanied by the expertise to exploit it. Or, as I once heard it put, a Ferrari owner ain’t necessarily a Ferrari driver. Into this gap we wanted to try and insert something surprising. 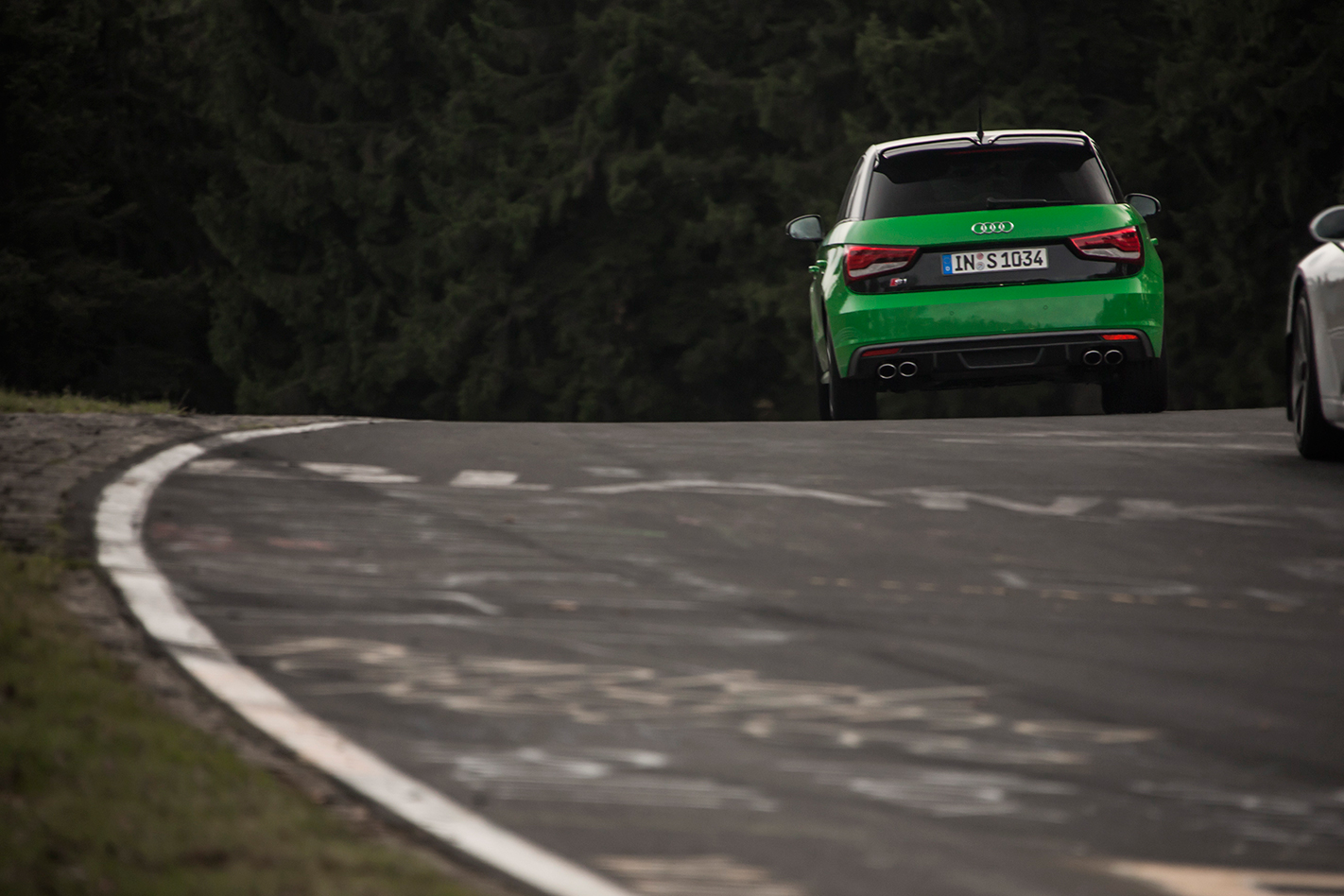 Audi didn’t laugh out loud when we explained our idea. In fact, they agreed to facilitate our experiment. They could provide a car and a Nordschleife-knowledgeable driver. So the plan was made. Collect an S1 Sportback in Ingolstadt. Drive halfway across Germany to the Nurburgring to rendezvous with Audi racer Winkelhock. Ride several laps of the Nordschleife with him as he hunts big game in a $50,000 hot hatch. What could go wrong?

There are versions of Audi’s 2.0-litre four-cylinder TFSI engine that produce way more power than the S1’s 170kW maximum (including the 210kW example in the S3, to name the most obvious example), but there’s a rich, 370Nm-deep vein of torque from just above idle to compensate.

It’s also true that the S1 is hefty for its size, weighing in at around 1400kg with driver on board. But a large chunk of the handicap it carries, compared with an ordinary A1, is due to it being the only model in the line-up equipped with Audi’s quattro permanent
all-wheel-drive system.

So the S1 isn’t brutally powerful or feathery light.

A circuit-scorching monster it is not, but it is the kind of car that driving enthusiasts who also need day-to-day practicality buy. And it is decently quick. All-wheel drive means that next to nothing the engine produces is wasted as wheelspin, as its claimed (and believable) 0-100km/h time of 5.9 seconds testifies.

There’s no doubt Markus Winkelhock is the right man to extract the absolute maximum from the S1 Sportback’s relatively modest potential. If the surname of the 34-year-old German is familiar, it’s because he comes with a pedigree. He is the son of Manfred Winkelhock and the nephew of Joachim Winkelhock, gifted racers both.

Markus was five years old when his father died after crashing a Porsche 962C at the Mosport Park circuit near Toronto, Canada, during a round of the 1985 World Endurance Championship. Manfred had been a Grand Prix regular since 1980, driving mostly for the ATS team, but liked to mix Formula One with sports car and touring car racing.

Though he was too young to clearly recall this awful event, Markus does remember the effect it had on his surviving parent. “My mother said: ‘No, no, don’t go be a race driver. You should do something serious’,” he tells me when we meet. She wanted him to study photography instead.

But the call of the circuit was too strong for Winkelhock. He showed promise in a junior open-wheeler series, found support, progressed to DTM, made it into F1, then achieved success driving GT3 cars. In 2012 he was part of the four-member team that drove an Audi Sport Team Phoenix R8 LMS Ultra to victory in the Nurburgring 24 hour race. He did it again in 2014.

But before we meet this man with the big ’Ring reputation, there’s the matter of getting the S1 Sportback from Ingolstadt to Nurburg.

It’s early on a foggy Sunday when we depart from the Audi Forum. This precinct, which houses the company’s headquarters as well as its interesting museum, is almost deserted. Ingolstadt is in the German state of Bavaria. Not far south lie Austria and the Alps. If you’re looking for great driving in the region, this is where you want to head. But we’re not going that way. Nurburg and its Nordschleife are near Germany’s border with Belgium, about 500km north-west of Ingolstadt. 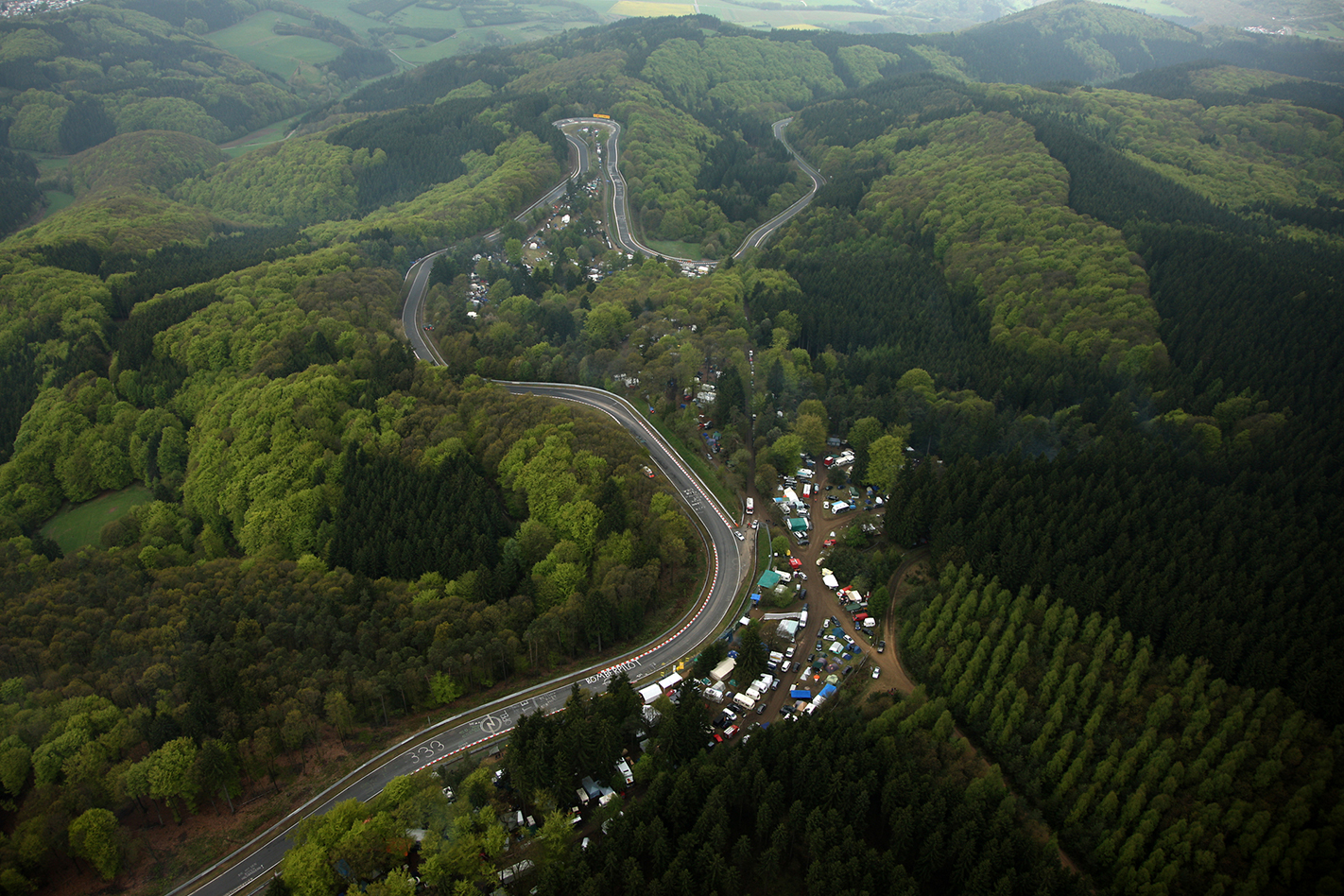 We visit the historic town of Eichstätt and explore a steep hillside covered in vineyards outside Erlenbach. From here we can see Neckarsulm, Audi’s other important base in Germany. It’s a beautiful day, warm and clear, but back at Ingolstadt, observant German photographer Tobi had noticed the S1 Sportback was wearing winter tyres. They weren’t a problem driving at a leisurely pace, but on the autobahn their blocky, squirmy tread pattern does nothing for high-speed confidence. Though we see 220km/h-plus a couple of times, directional stability isn’t great. Much more pleasant to cruise around 150km/h, a stressless Sunday-driver pace in Germany.

We arrive at Nurburg at sundown and I’m preoccupied with the tyre problem. We simply can’t hobble the S1 Sportback with winter rubber, so I’m playing phone and text tag with Audi to organise a solution. I go to bed after dinner and drinks at a couple of classic Nurburgring hang-outs, still worried.

By mid-morning the next day, ace Audi operative Petra has a plan. Photo chase car driver Helmut heads in his A4 Avant to an Audi dealership near Koblenz, about 60km away, where he’ll collect a set of summer tyres and wheels stripped from a showroom S1.

Technicians at Audi’s Nurburgring test facility will do a wheel swap for Winkelhock’s hot laps, then put the winter tyres back on when we’re done. As the Nordschleife isn’t going to be open to the public until 5.00pm, there’s ample time to get this done.

Winkelhock arrives on time, and in time for lunch. He’s bright-eyed and relaxed, but confused by our choice of the S1 Sportback. So I explain our quest, and what we’re hoping he can do.

He estimates 90 percent of his large tally of Nordschleife laps have been in race cars. But he has driven roadgoing Audis here, too, putting development laps on the RS6 and R8.
It’s easier work in a racer, he insists. “Because, you know, the set-up is made just for the Nordschleife. You have got slicks, you have got downforce, the car feels so stable. In a road car it feels much more soft, and for sure with the road tyres you have not that much grip and the car is more moving, you know.”

An hour or so before the circuit is opened to the public we move to the cafe and bar beside the entry point. It seems Winkelhock is acquainted with half the people here today. He’s approached by a young American, a fellow racer and former team-mate who’s come to rent a Suzuki Swift Sport and show his accompanying girlfriend the Nordschleife. A few minutes later Winkelhock is off for a chat with Erich Zakowski, founder of Zakspeed, a famous team that in the late 1980s ran its own chassis and engine in F1. “My dad used to race for him,” explains Winkelhock when he returns.

The session for race-car testing runs over time, so the bright green Audi’s appointment with Green Hell destiny begins a little late. As we’re about to settle into the S1 Sportback, I ask Winkelhock if he’s ever driven one before. “No, never,” he replies.

Not that you’d know. He has the measure of the Audi’s limits inside the first few hundred metres of the first lap. Winkelhock’s intimate knowledge of the Nordschleife is obvious, and it’s a huge advantage. This daunting, legendary and frequently lethal 21km ribbon of bitumen is etched indelibly into his brain. It’s after our first time through Flugplatz that Winkelhock tells me he’s taking zero risks. 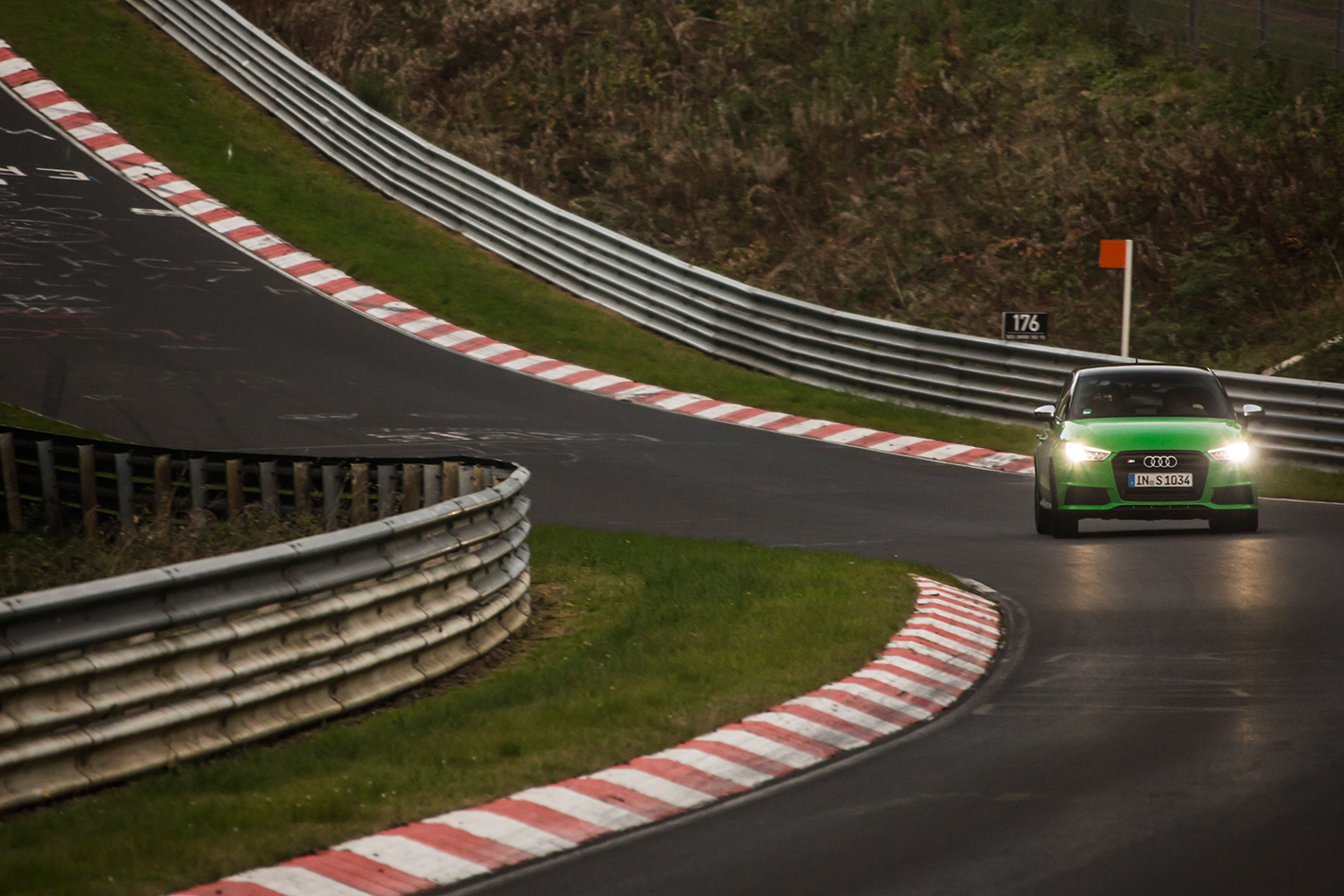 He’s using the circuit’s kerbs more than I’d expected, but his lines are a masterclass in the value of precise car placement. He’s connecting the Nordschleife’s corners with casual brilliance, at the same time chatting about how much more speed he would be carrying in a GT3 racer at each point.

Winkelhock’s fluidity yields ferocious speed. He’s using everything the S1 Sportback has to give, all of the time. Without ever making a mistake worth the name. It is an awesome display.

I’m enjoying it immensely, but Winkelhock seems to misread my expression. “Are you feeling okay?” he enquires after the first lap. “Fine,” I assure him, puzzled by the question. Then Winkelhock owns up to being a nausea-prone passenger, even riding with another racer he knows and trusts. The only thing that’s making my stomach churn is Winkelhock constantly mentioning scary-fast race car speeds.

The mix of cars and people here today is amazing. There’s a prim-looking young woman in a rented Swift Sport. She’s not fast, but she is neat and – very important here – watches her mirrors. A BMW 3 Series GT is being piloted by an average-looking middle-aged man. An accountant, maybe. There are some tatty E30 and E36 BMW 3 Series, well driven. I’m guessing they are track regulars, the so-called ‘Ringers’. Weirdest of all, there’s a British-registered Austin Maestro. This piece of crap from England’s darkest hour is painfully slow. We flash past so fast that I can’t get a look at the driver. However, we haven’t come here to claim victims such as these.

Winkelhock’s speed scores a Ferrari on the second lap. He catches the silver 360 very quickly, then runs the S1 Sportback up the inside on the way into a left-hander. Easy. The tally grows on our third and fourth laps. Several Porsche 911s, a Cayman, and more.

The Audi is overtaken during its four laps of the Nordschleife. But only by a pair of very serious 911s and a Skyline GT-R. No dishonour for the S1, or for Winkelhock. I only realise how hard he’s been working after it’s over and he climbs out of the car. It’s not a hot day, but the back of his shirt is sweat-drenched. He nips off to change it for a fresh one.
Winkelhock’s toil, though, has proved the point. Knowledge and skill in a hot hatch can beat money and power in a supercar. No risk at all. 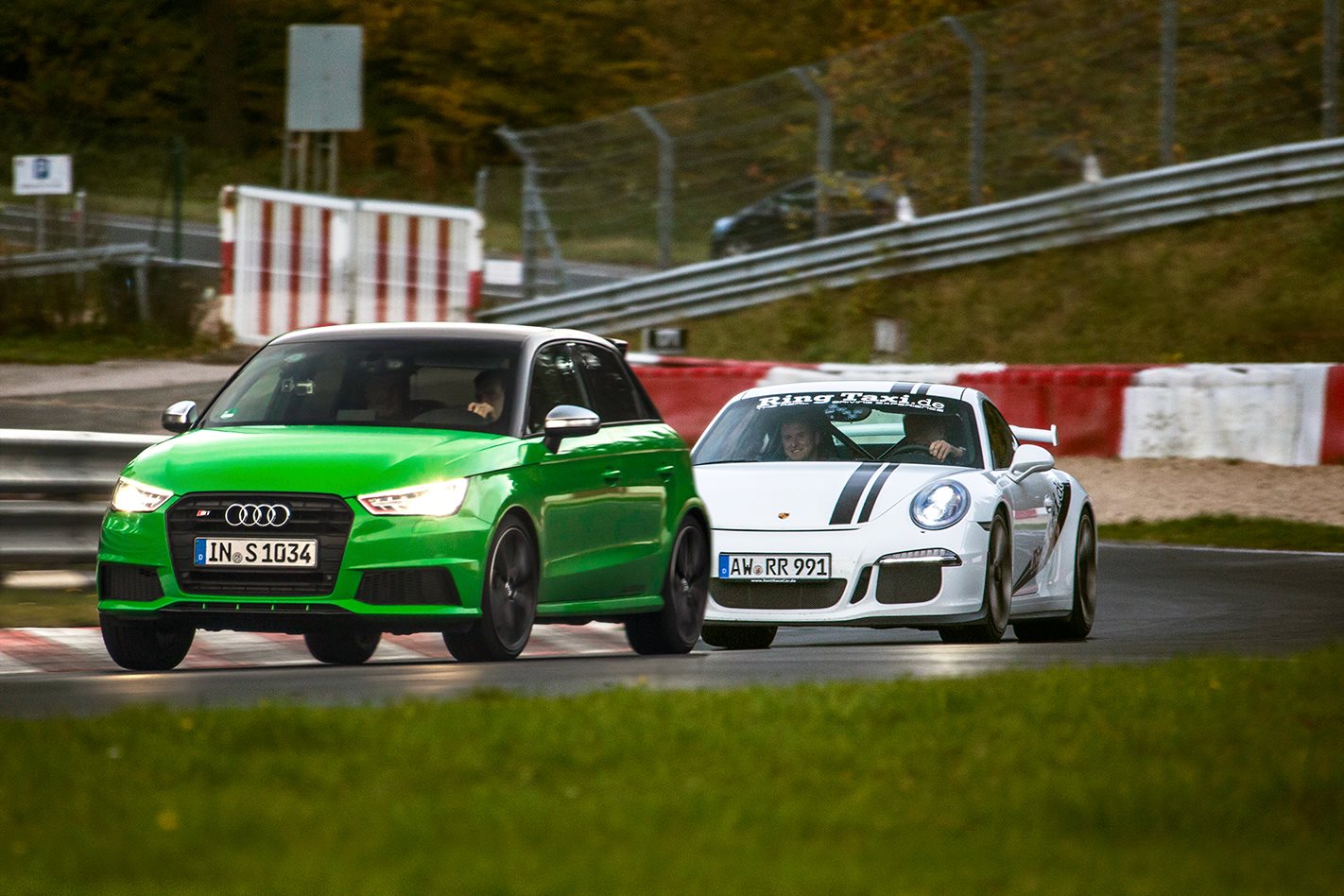 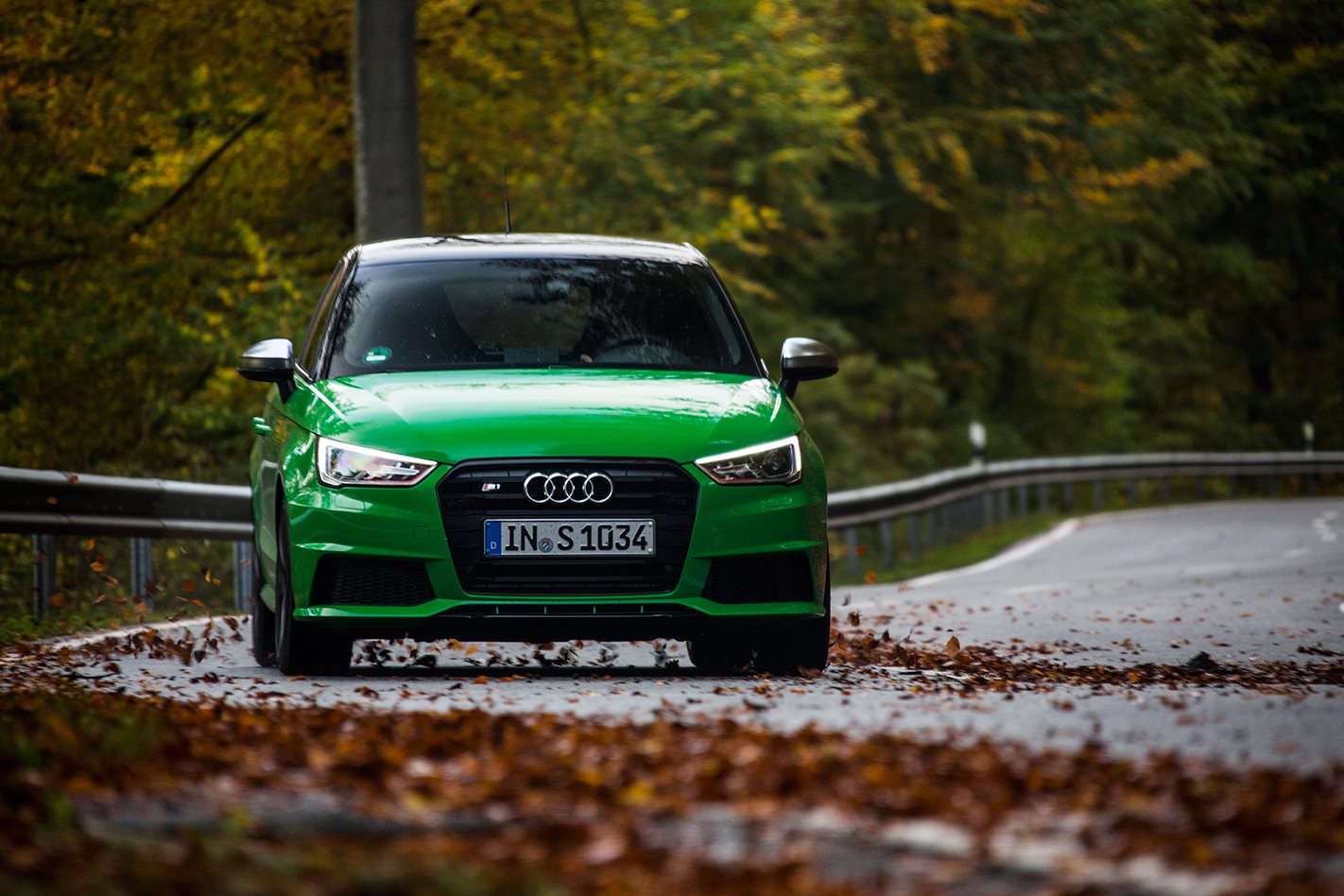 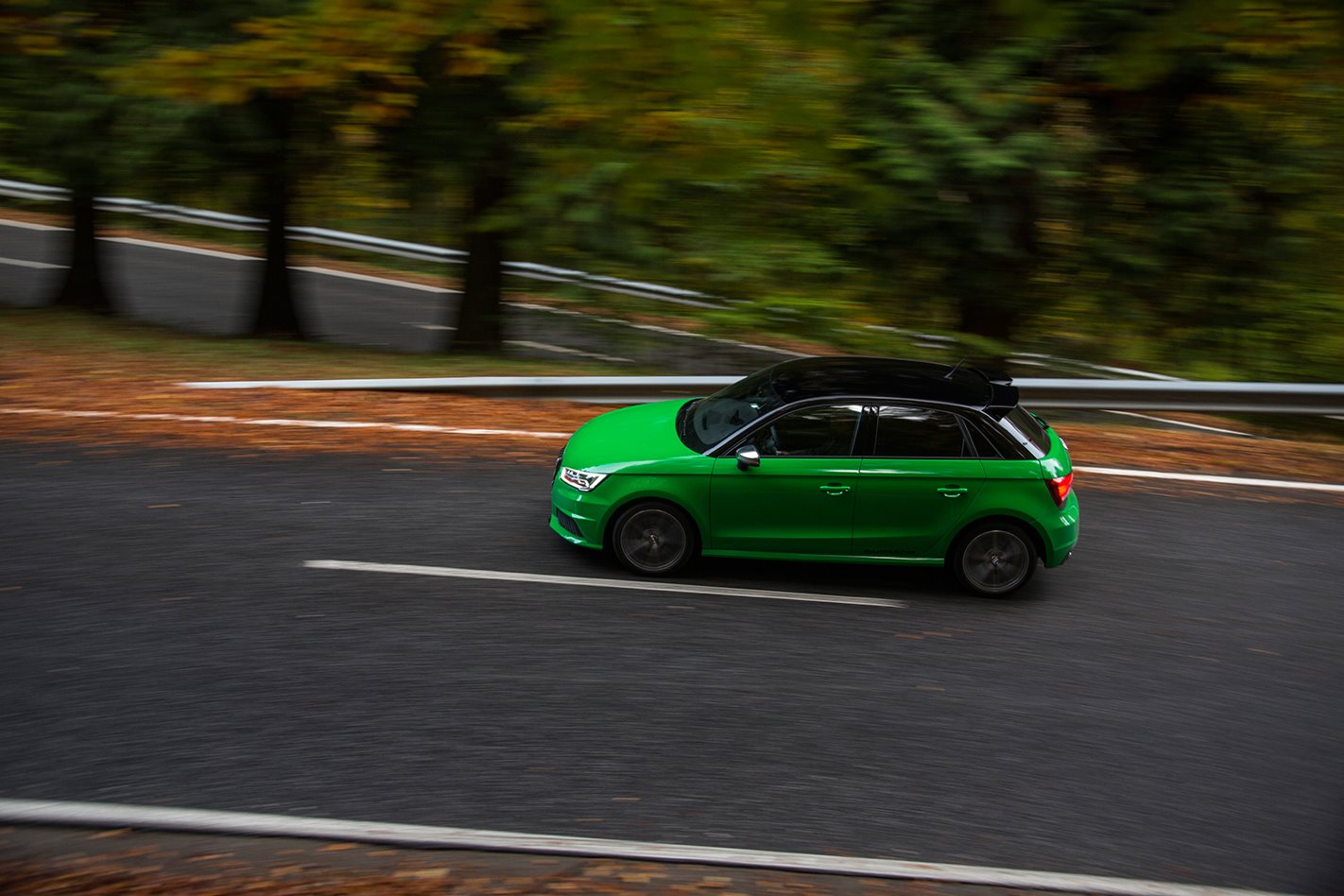 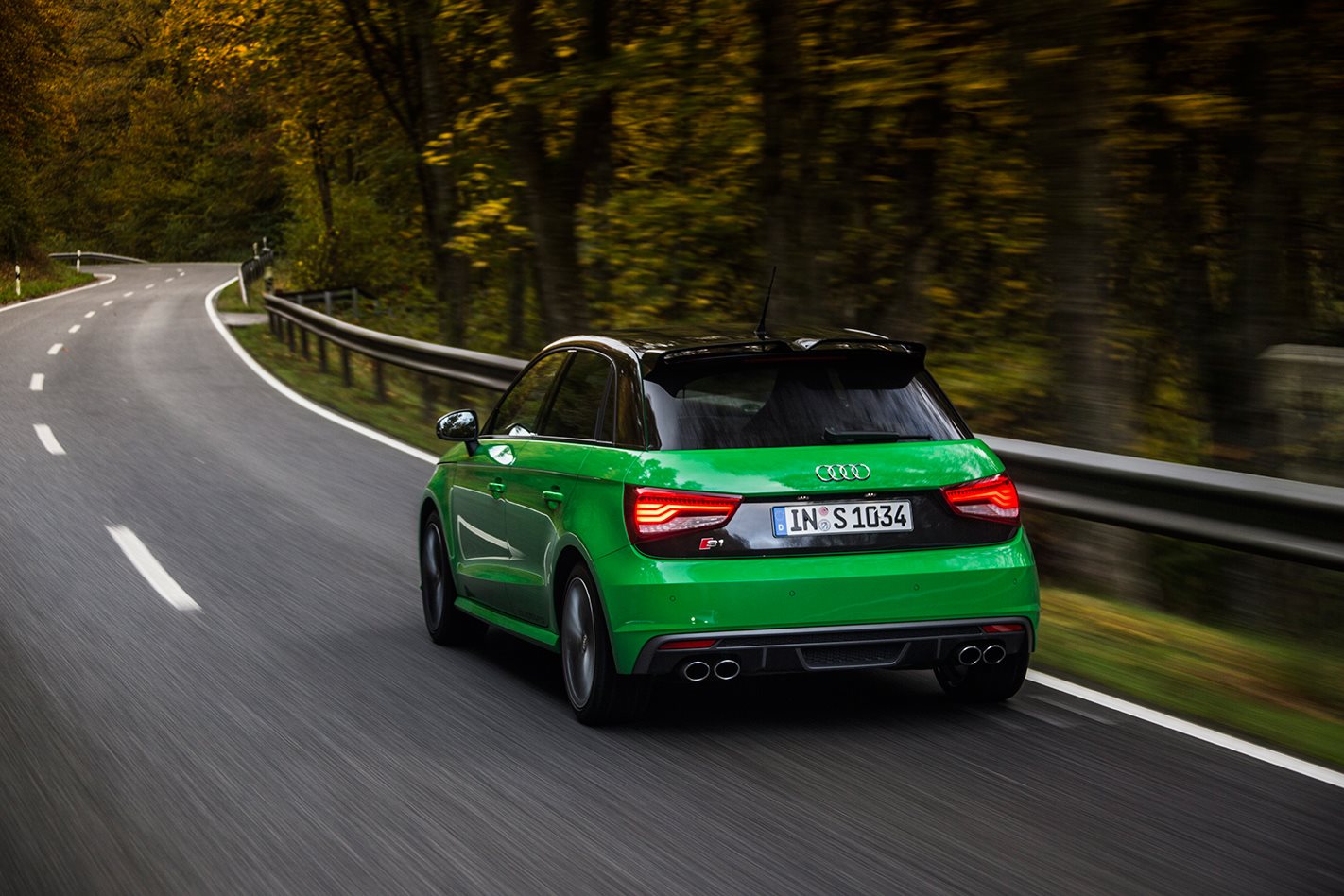 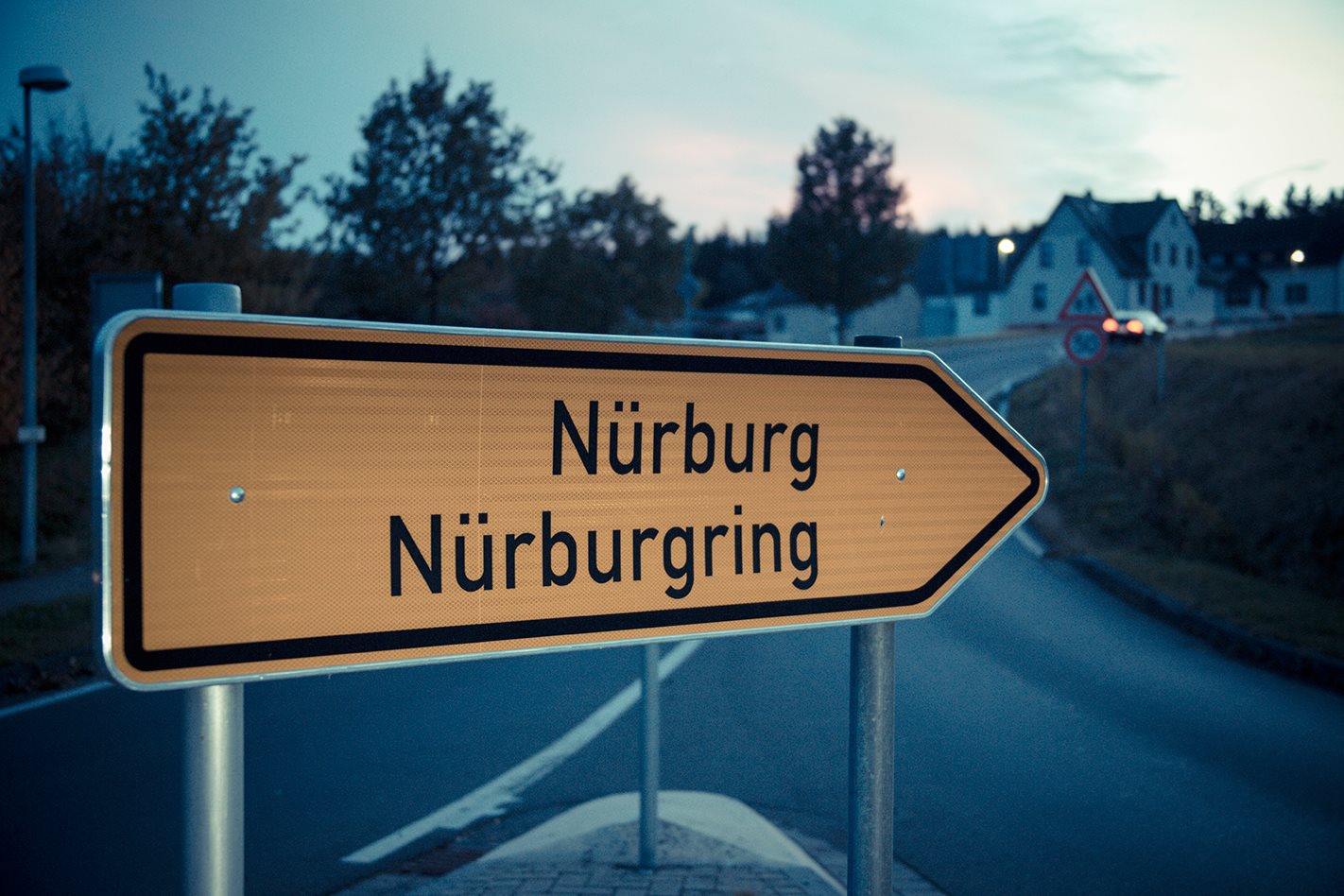 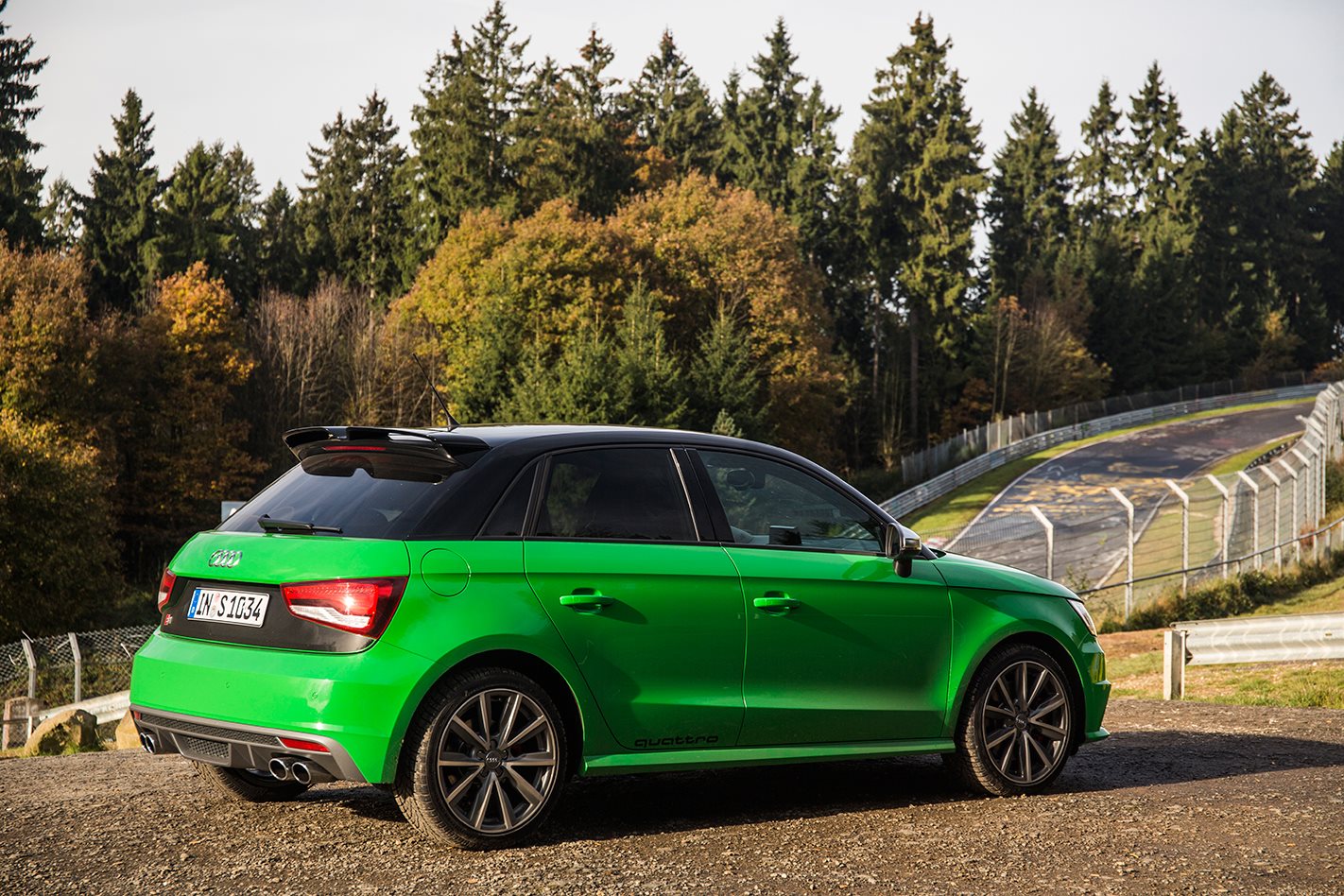 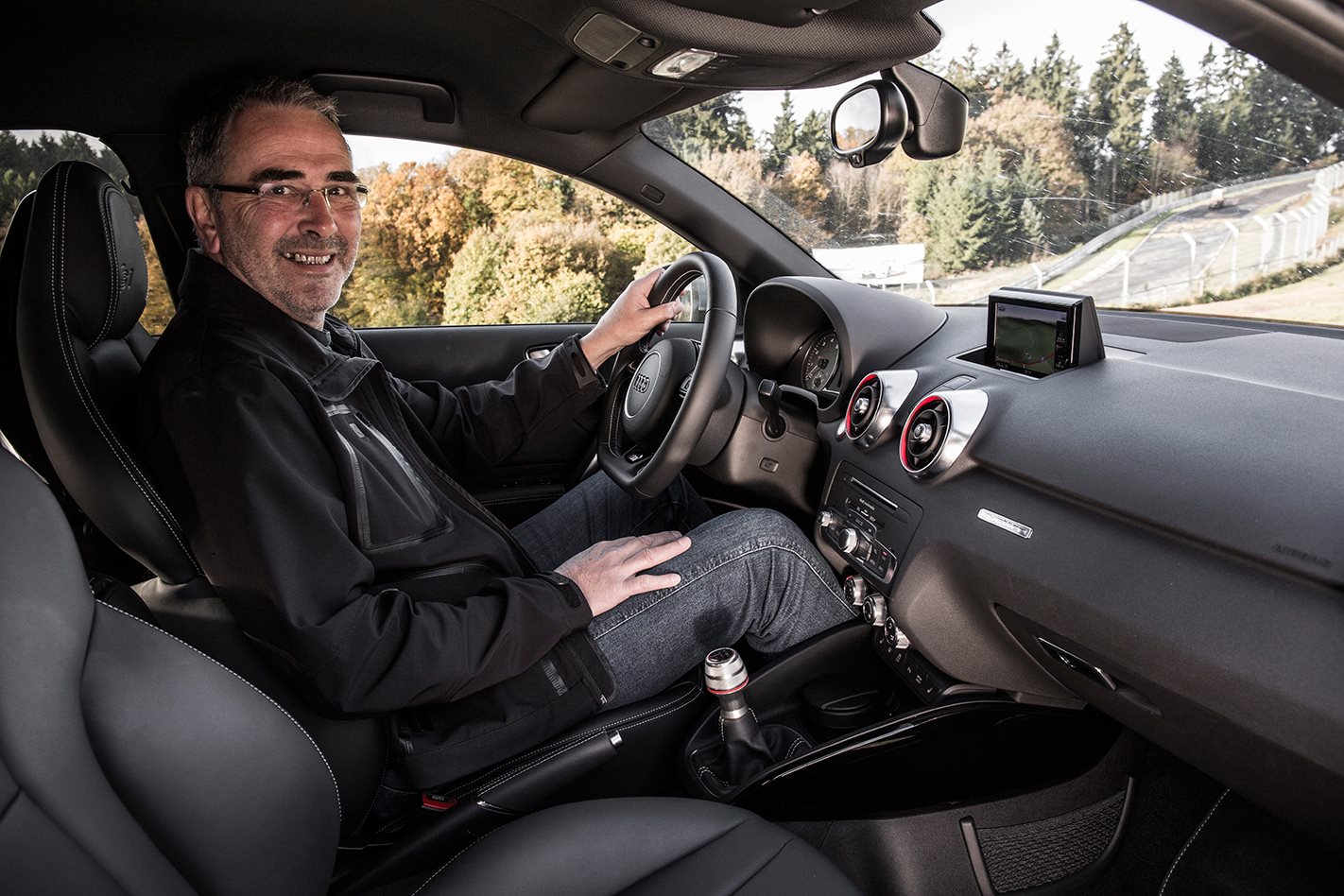 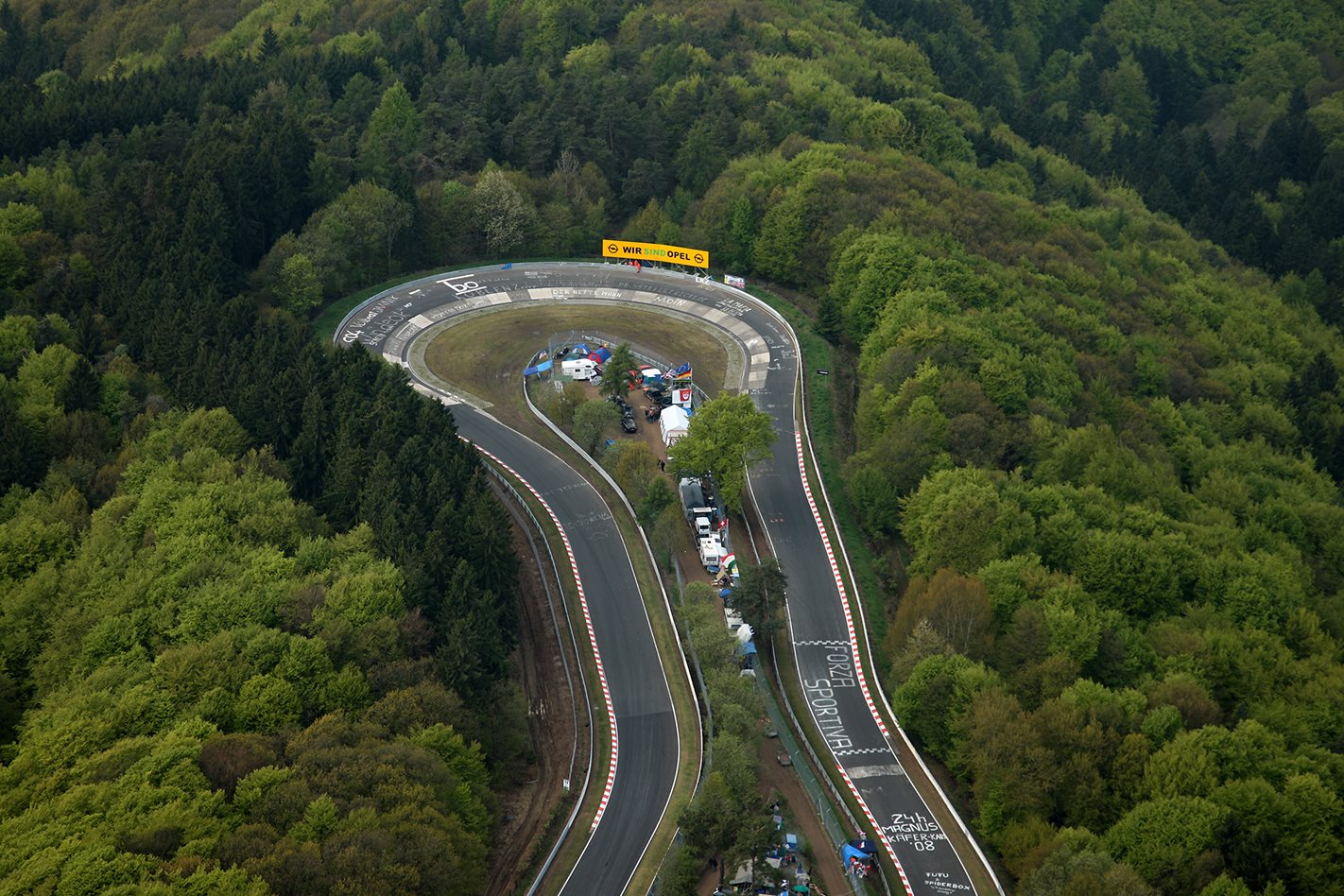 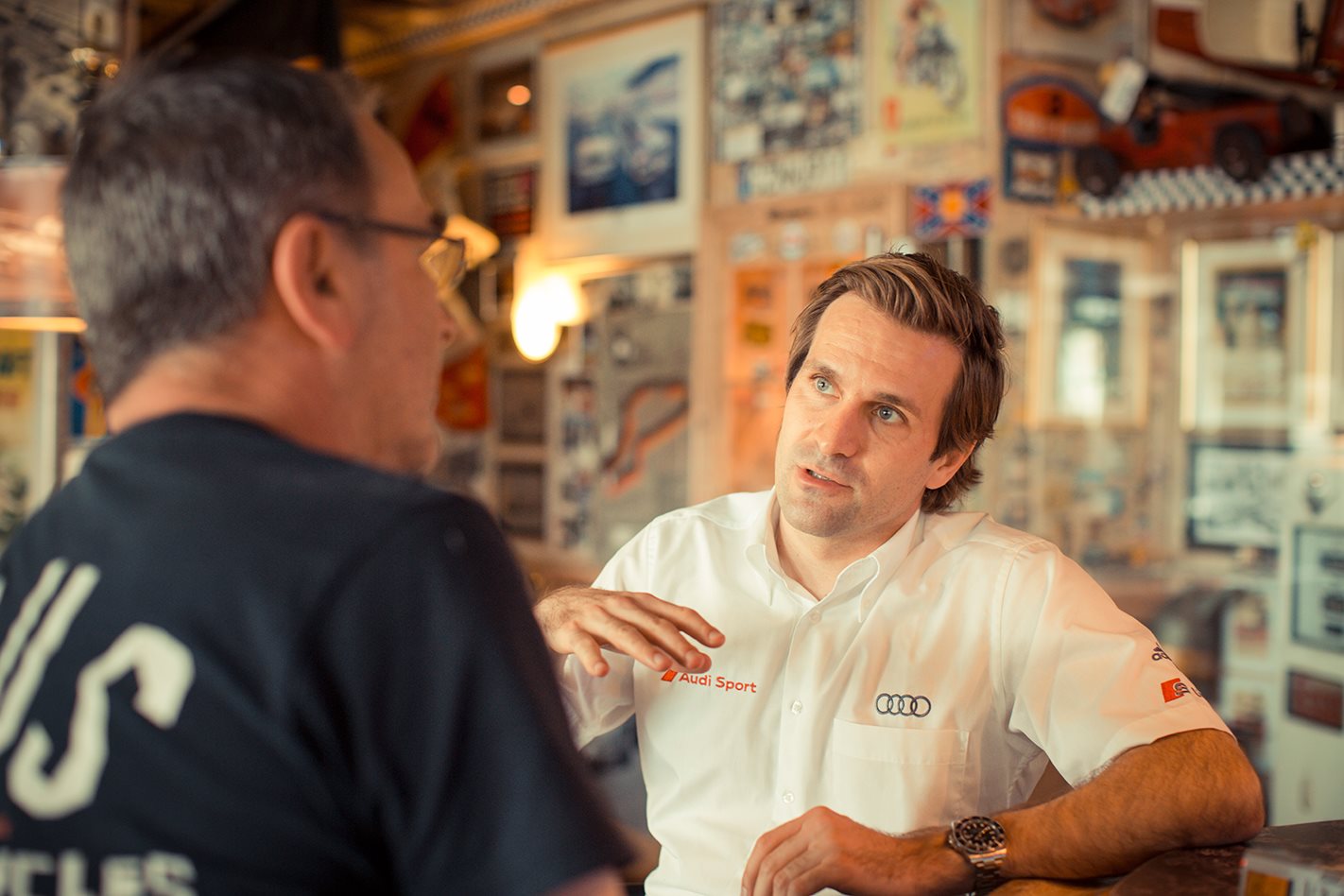 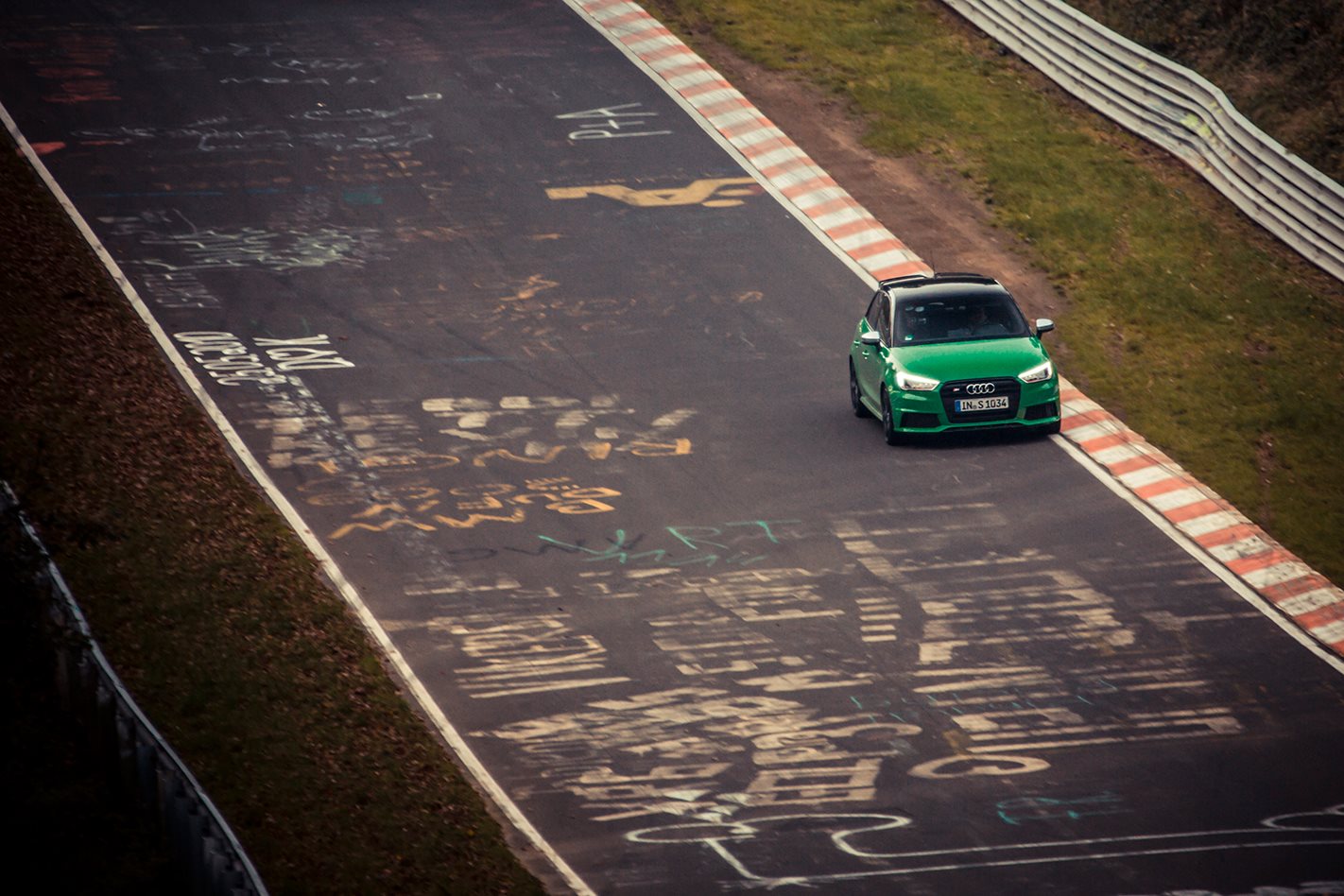