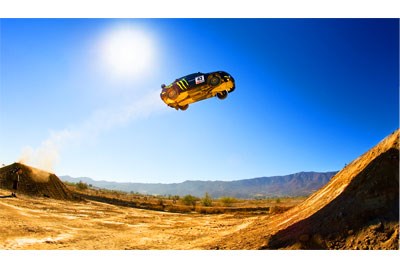 Ken Block's massive air and superhuman car control have made him a download demigod. he's, like, having a blast, dude

"Was that fun?" That's what Ken Block wants to know as I peel myself out of the passenger seat of his Subaru Impreza WRX STi rally car, the tyres still smouldering from a full-throttle doughnut that swallowed us in smoke and flocked our tongues with vaporised rubber.

Judging from the roar, the crowd lining the concrete barriers of the rally super stage at the X Games 15 in Carson, California, certainly thought so.

Block, 41, was a teenage skateboard junkie who became a multimillionaire T-shirt and sneaker tycoon, who then became a US rally star and internet video demigod. His two Gymkhana Training videos and various other internet shorts and Top Gear cameos are edging close to 30 million downloads. For Block, the question of fun is the only question.

"That's what this is all about. If I'm not enjoying myself or having fun, like, why be out here?"

Indeed, why are we out here? While uniformed techs swarm over the trio of $200,000 Subaru rally machines in Block's pit, I scurry after Block and his young family as they retreat from the swarming fans and the swelter of Los Angeles in late July to a mammoth air-conditioned motorhome. Block gives plenty of face time to his public, but now it's time to eat.

Slightly taller than most and lean under his buzz cut, Block's kerb weight is 84kg according to the official roster of X Games, an annual, heavily stylised Olympiad of telegenic action sports.

"My dream was to be a professional skateboarder or snowboarder," he says between bites of salad and cold cuts. Block's wife, Lucy, has her hands full with two-year-old daughter Lia and six-month-old Kira.

"But when I realised I wasn't good enough to be that, I found a way to make a job in the industries that I loved."

Who knew then that a youth spent perfecting jibs and half-pipes could be so lucrative? Block certainly didn't. When his parents moved away from the skate parks of LA to the rural desert east of San Diego to start an avocado orchard, he took up sliding and jumping motocross bikes, skills that would later prove handy behind the wheel.

At a Southern California community college, Block doodled T-shirt designs on the school's computers. He and his partners, including Damon Way, brother of skateboarding idol Danny Way, started making clothing in the mid 1990s infused with the slacker attitude of the skate rats and snowboard bums Block called friends.

Sales bloomed, but it was his venture into skateboard shoes that launched an empire. DC Shoes took off so fast that Block and his partners divested themselves of their other businesses to focus on DC. When billion-dollar sportswear giant Quiksilver came wooing in 2004 with an $87 million cash buyout offer, DC was ringing up $100 million in annual sales from shoes and other gear.

Block stayed on to manage the DC brand. He bought a Bentley but decided it was too flash and traded it for a Mercedes-Benz CLS55 AMG painted matt black. He bought a second home in the Utah skiing mecca of Park City. And he enrolled in a rally driver's school in Vermont.

Block's speech tumbles haphazardly like a fallen snowboarder, shedding disfluencies such as 'like' and 'you know' as if they were loose equipment. Typical of Block's eloquence is this quote from a video (12 million downloads and counting) in which his rally car practically reaches orbit in a record-setting 52m jump: "I wasn't that nervous because, if I get too nervous, it would suck."

Deep. Yet, for a guy who smashes fluorescent tubes over his head in his latest Gymkhana Two video (five million downloads so far), Block is no numbskull. He certainly has the skills, as well as the pockets, for plunging down forest roads sideways at 160km/h. Rally America, the US sanctioning body, named him Rookie of the Year in 2005, and in 2006 he became an official Subaru factory driver.

"I just was never that interested in NASCAR and cars that went around circles," says Block. "Rallying looked fun, with the sliding around and jumping. I could kind of relate to that from dirt bike riding."
However, for most Americans there's NASCAR and nothing else. Block knew that winning rallies wouldn't buy much exposure for DC, a pattern he recognised from his skateboarding life.

"Skateboarding is sold more on style and tricks and that type of thing, not on winning contests," he says. "A lot of the basis of the industry is about videos and photos. So I just pretty much took that concept and emulated it with rallying."

The Gymkhana Training videos - there are two so far with assorted outtake reels, plus a rally-snowboarder extravaganza filmed in New Zealand - are stunt-driving shorts shot like skateboard videos and aimed at promoting Block and his products.

The first Gymkhana, filmed over two days in September 2008 on a decommissioned military airfield south of Los Angeles, has Block sliding and looping and generally raising hell in a one-off 370kW Subaru. In its most memorable sequence, Block does a series of tyre roasting doughnuts around a moving Segway scooter, passing within centimetres of the brave rider's kneecaps.

Says Block, "I didn't look at any of the footage until a week or two later, and when I saw it I was pretty blown away. When I'm driving the car, I don't know exactly what it looks like. When they finally showed me a rough edit I was really stoked."

Viral? The first Gymkhana video was an online bubonic plague.

Planned around the launch of a new DC sportswear line, the second Gymkhana hit in June 2009, subtitled 'The Infomercial' because it was thought that the only way to market to DC's hyper-skeptical audience is to joke about it.

Filming at the gritty Port of Los Angeles docks took five days, cost "a few hundred thousand" says Block, and involved using a ponderous high-definition, slow-motion camera called Phantom, which requires its own generators, lights and crew. The video verges on abstract performance art as Block stomps on green, goo-filled balloons and powerslides through a line of fluorescent light tubes, all of which theatrically explode in slow motion.

What's next? Block shakes his head. Even if circling a moving Segway proves to be the high point of his internet oeuvre, he's okay with it. "How much can you do with a car? You know, I can't backflip it. Maybe I could jump onto an aircraft carrier." 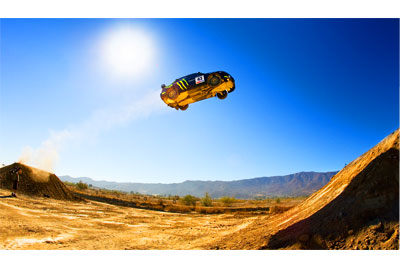 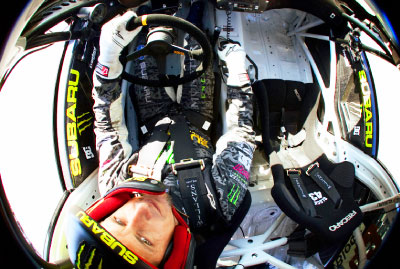 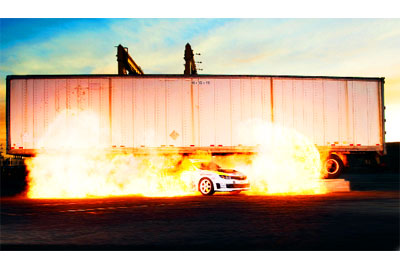 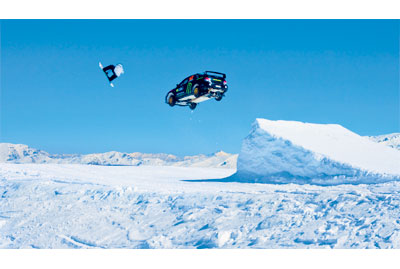