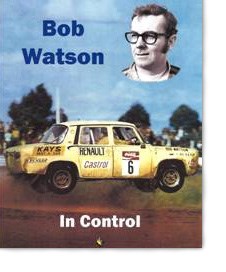 Wato has done it all. Now he's writing about it.

A Holden development engineer, circuit racer, Australian Rally Champion and event organiser amongst many other varied roles in a full and successful life, Bob Watson finally took the hint and took time out to write his memoirs.


And we should be grateful that he did. He fills in some yawning gaps in our history, those relating to race and road car development, as well as the sporting adventures in international rallying.

Consider that Watson was a works driver for Holden, Ford, Renault and Nissan. He competed in the East African Safari and '77 London to Sydney Marathon. Always adaptable, he also raced touring cars at Sandown and Bathurst. And he was a hero of rallycross along with Peter Brock, Ed Mulligan, Michael Browning and Larry Perkins back when this hybrid form of motor sport was a major attraction. In recent times, he has organised some of Australia's more popular outback endurance events.

In Control, is a 176-page ride through Watson's fulsome life, touching on characters such as Ross Dunkerton, whom he has observed as rival and teammate, and the late Gil Davis.

Apropos bugger-all, really, the mug shot used on the cover of the book evokes similarities with someone far removed from motor sport, the singer Elvis Costello.

To my knowledge, Bob Watson isn't much of a singer. But he was and is a heck of a driver, and, as it turns out, a very handy storyteller too.

Remarkably, Watson is now 70. This surprises me as he retains the vigour and passion of a way younger man.

As many and varying activities that Watson has tackled successfully, it's clear that rallying retains his greatest affection.

The crazy characters, the camaraderie, and the thrill it gives can't be matched.

Sliding a rally cars through a series of corners at the limit of tyre adhesion in perfect balance, writes Watson, must equate to a golfer getting a hole in one, or a surfer catching a perfect wave.

He recalls too with affection the less complicated era of motor sport when the emphasis was equally applied to 'motor' and 'sport'.