Bruce McPhee was a racer and a thinker 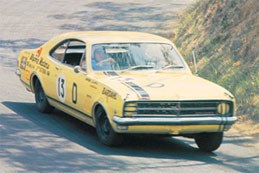 He was the first man to claim Bathurst poles for both Ford and Holden.


The Central Coast touring car star is remembered for driving his privately entered yellow Monaro GTS 327 all but one lap of the '68 500-mile race, his co-driver Barry Mulholland not required to use much energy.

McPhee was out of the car long enough to fulfil his obligation to race regulations, and to have a toilet break.

He defeated both the Ford and Holden factory teams to claim his first and only victory.

McPhee first came to this writer's attention at Warwick Farm in the early 1960s, flinging around a lime green FE Holden with savage abandon.

Commentator Will Hagon remembers McPhee 'as a really interesting, clever-thinking guy. And a nice bloke. He knew more about tyre wear/technology than most of the people around him, which is why he went so well running on Michelin road radials'.

That he did, buffing his road tyres down to what was a forerunner of the slicks that motor sport adopted many years later.

Max Stahl also paid tribute to his old mate and rival McPhee, whose health had steadily declined over the past few years, since the loss of his devoted wife, Alma, in 2006.

"Bruce and I had enjoyed a close friendship since we met on NSW race circuits in 1962 and his passing is a sad personal loss,"' said the former Holden racer and founding editor of Racing Car News.

In 1969 McPhee and Mulholland, driving a privately-entered Falcon GTHO finished a close second at Bathurst to Monaro GTS350 of Colin Bond/Tony Roberts.

Another second place came in 1970 as a member of the Ford factory squad..

McPhee wasn't a massive household name like Firth or Jane or Beechey. But those who appreciated talent with a splash of lateral thinking always rated him highly.

On the day Bruce passed, I received a thoughtful note from Kim White, a former karting promoter and father of racer Damien who these days does commercial work for a V8 supercar team. He acknowledged McPhee's impact on him.

"Bruce McPhee. Hey, I rated him, as a young kid standing on top of that bloody mountain just below Skyline watching that yellow Monaro, he shaped me, and I was a Ford fan!" White wrote.

"I have lived in around and made a living out of the obsession that is motorsport most of my life and Bruce McPhee needs to shoulder some of the responsibility. He was not a superstar as we know them to be now, but someone who knew how to do what he did bloody well.

"Another life box ticked and sign post to inevitability posted. I feel I should say 'thank you, Bruce'.

"Wonder if those "proper" men like Bruce knew the effect they were having?"