I drove my first Ferrari – this impossibly red F355 GTS – at precisely 9:48am on a bright Wednesday morning. Three hours later, I almost crashed it

I DROVE my first Ferrari – this impossibly red F355 GTS – at precisely 9:48am on a bright Wednesday morning. Three hours later, I almost crashed it.

Exiting the penultimate corner at the Broadford circuit, my attention fixed firmly on the GoPro wedged on the dash as I tried to film a witty video, the 355’s rear stepped out.

From the outside it hopefully looked like a perfect slide, where I calmly added a dash of opposite lock as I exited the second-gear right-hander. Inside the car, it was code brown.

Lesson number one when driving your first Ferrari, then: give it the attention it deserves or it’ll kick you in the face. As it should, given that it’s a thoroughbred from Maranello.

To me, though, the 355 isn’t just any Ferrari. It’s the Ferrari. Plastered on my wall as a 10-year-old (my 355 was bright yellow), I fell in love with its seductive Pininfarina design, its classic proportions and its screaming 3.5-litre five-valves-per-cylinder V8. So obsessed was I with the 355, I spent hours on the internet, fighting a painfully slow dial-up connection, just to download 10-second sound bites of its exhaust note.

Impossibly high expectations, then, but the 355 did not disappoint.

In the metal, it’s low, brutally wide and, to my eye, the perfect shape. Boxy, yet seductively curvy in all the right places, I still regard it as one of the prettiest Ferraris ever made.

Things only improve on the track. The steering is surprisingly light and wonderfully communicative, the brake pedal firm but confident, and the handling direct, planted and balanced.

It’s the engine, though, that dominates the experience with its glorious, high-pitched V8 howl. Mated to a sweet-shifting six-speed manual that emits a loud, spine-tingling ‘snick-snick’ every time you swap cogs through that open gate at the lofty 8500rpm redline, it’s undoubtedly one of the most engaging drivetrains I’ve experienced.

There’s no electronic safety buffer shielding you from the action. So, unlike most modern cars, I can feel every pop, fizz and crack. It also means every mistake, as I found out, is mine and mine alone.

Sure, there are some foibles. The driving position is far from perfect and I find myself reaching for the wheel, the rubber on the centre console has deteriorated into a sticky mess, and I can’t get the air-con to work. Then there are the enormous servicing costs (see breakout). But these are small complaints for a 20-year-old car that steers, stops and goes this well.

And don’t dismiss the 355 as impractical. On the road it’s as easy to drive as a Mazda 2. There’s a big boot in the nose, the ride on adaptive dampers (Sport and Comfort) is firm yet well-sorted, and when you remove the roof you can easily have a conversation at 100km/h with none of the wind-buffeting that can plague even modern targas.

The 355 was the first Ferrari to be fitted with an
F1-style paddle-shift gearbox. The 355 F1 introduced in 1997 boasted a new electro-hydraulic system for shifting the six cogs

The 355’s nomenclature doesn’t follow the formula used by other Ferraris of the era – the engine capacity followed by the number of cylinders. For example:
the 348 is 3.4-litres, eight cylinders. Instead, the 355 used its displacement, then five valves per cylinder

THIS particular Ferrari is owned by Peter Goodin, who is not only secretary of the Victorian Ferrari Club, but actually owns two 355s, six Toyota Soarers, a Hummer H2 and a
1997 Pontiac Trans Am.
Both his 355s are GTSs (the other one is silver) and Peter drives them both regularly. He’s even road-tripped this red 355, which now has 43,000km on the clock, from Victoria to Queensland and back. Peter’s the second owner, having bought it in 2006, and the entire car is stock aside from a Tubi exhaust.
Servicing costs are high: a minor service sets Peter back about $2000 every two years, while a major service every five years or 5000km, which requires removing the engine to change the cam belts, is at least $6000. Still, insurance is cheap at $1100 because, Peter says, “people don’t steal Ferraris, they scratch them”. 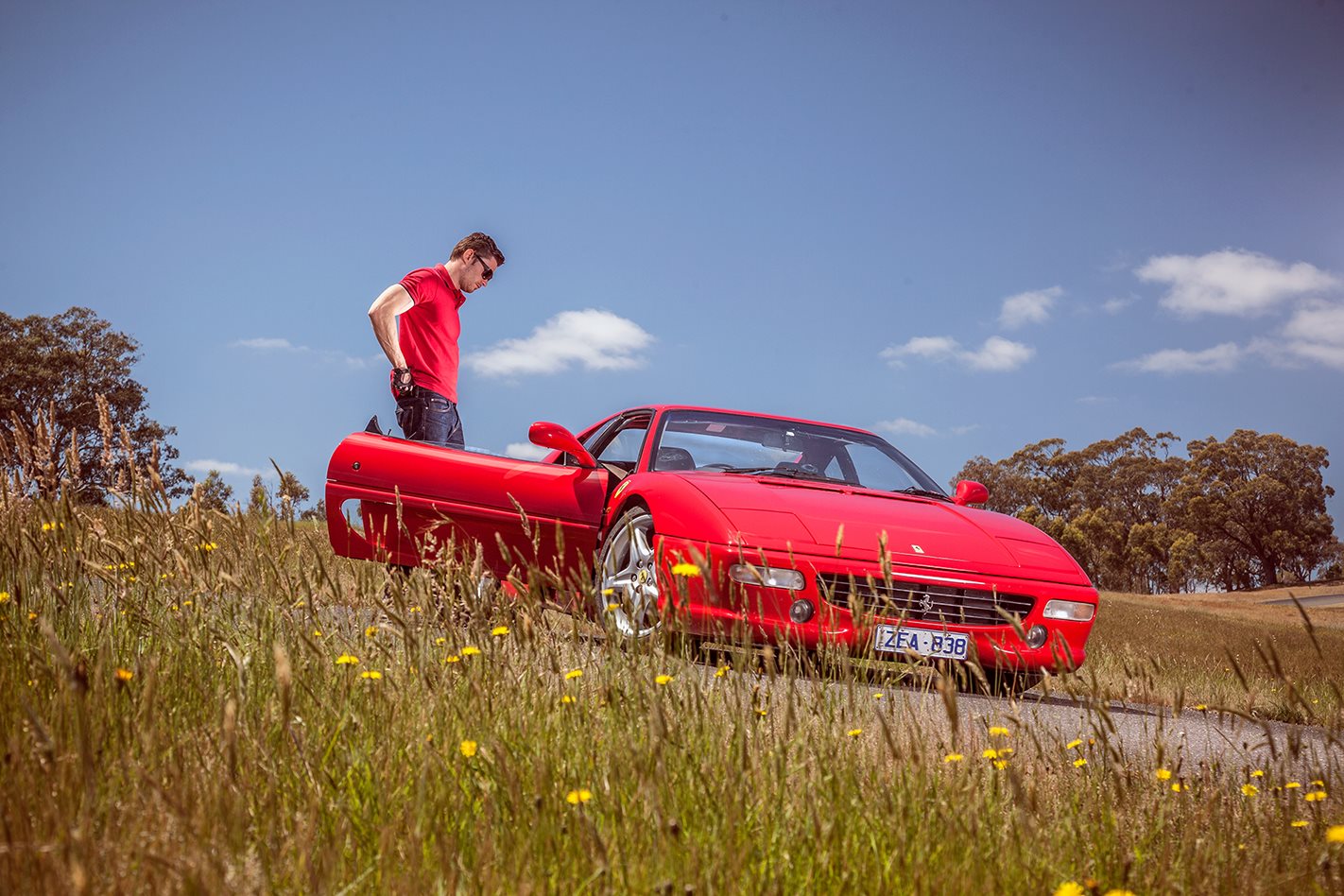 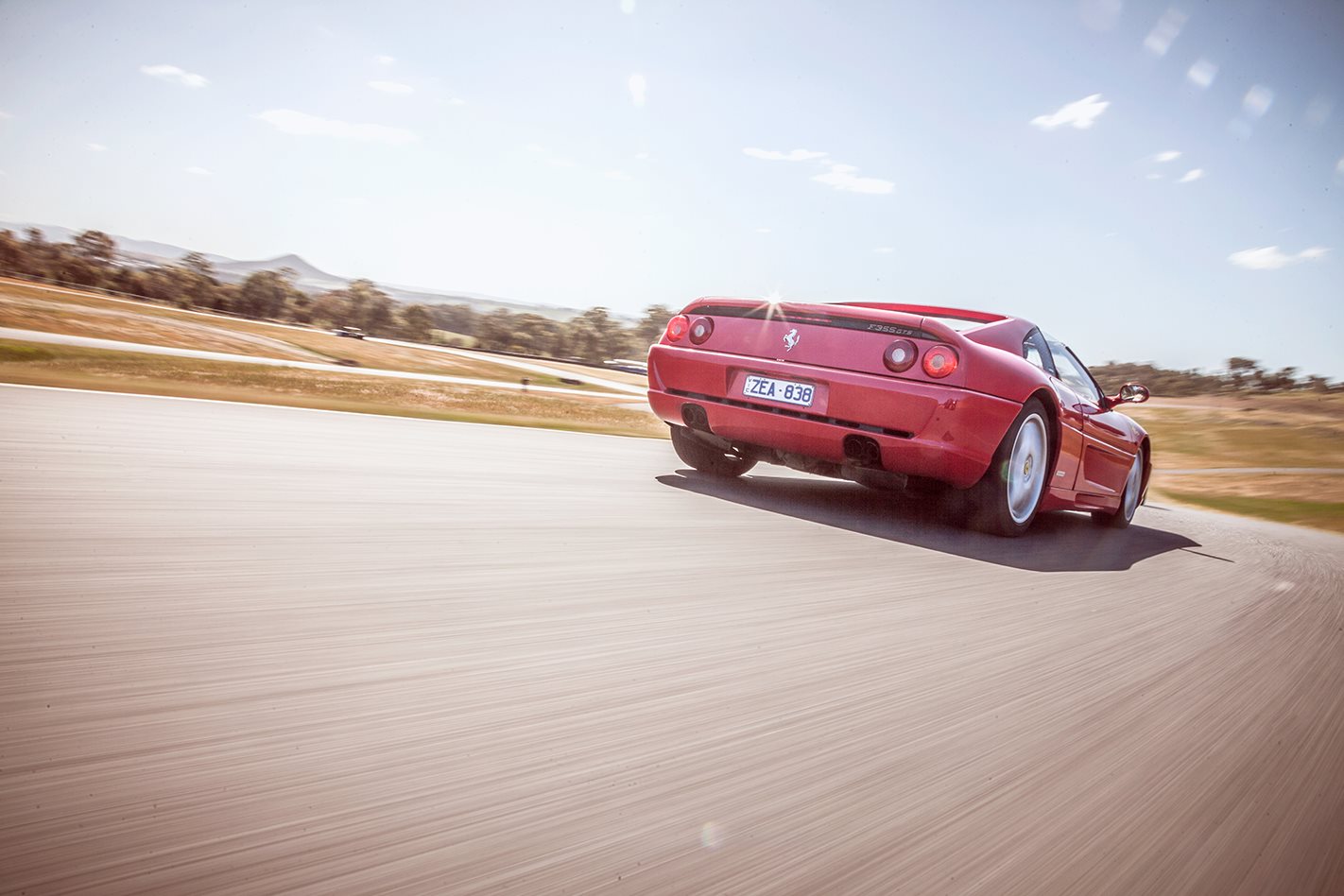 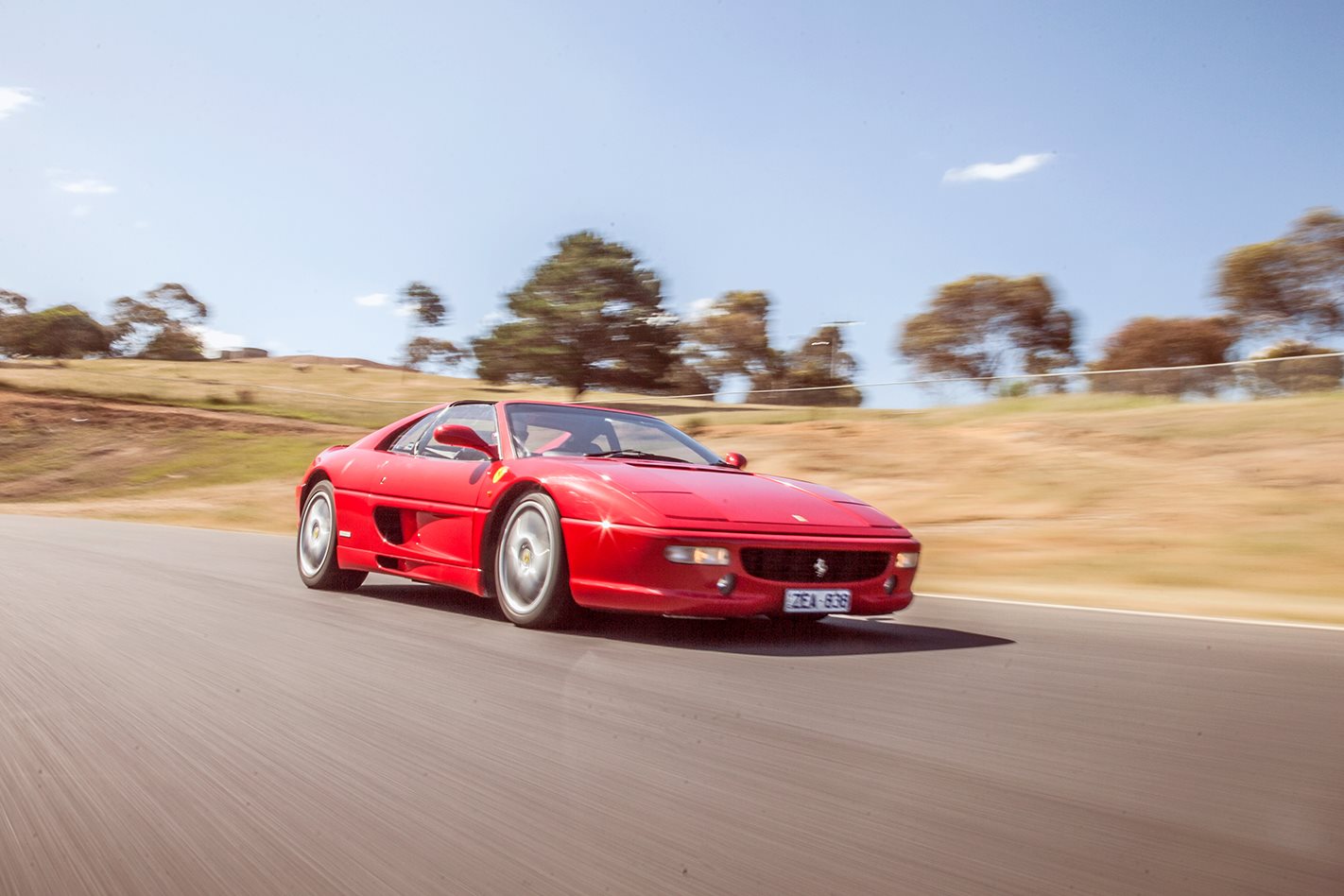 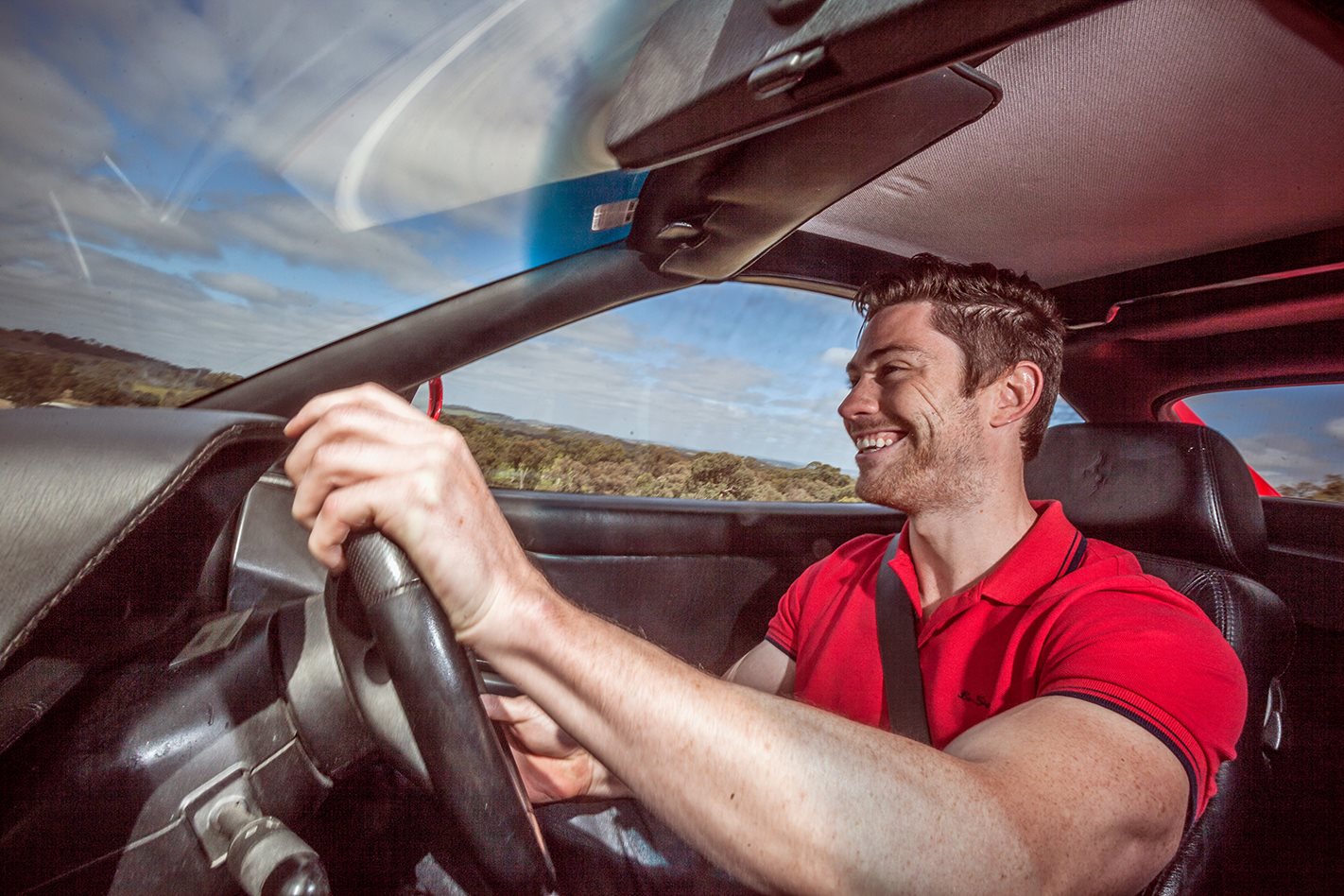 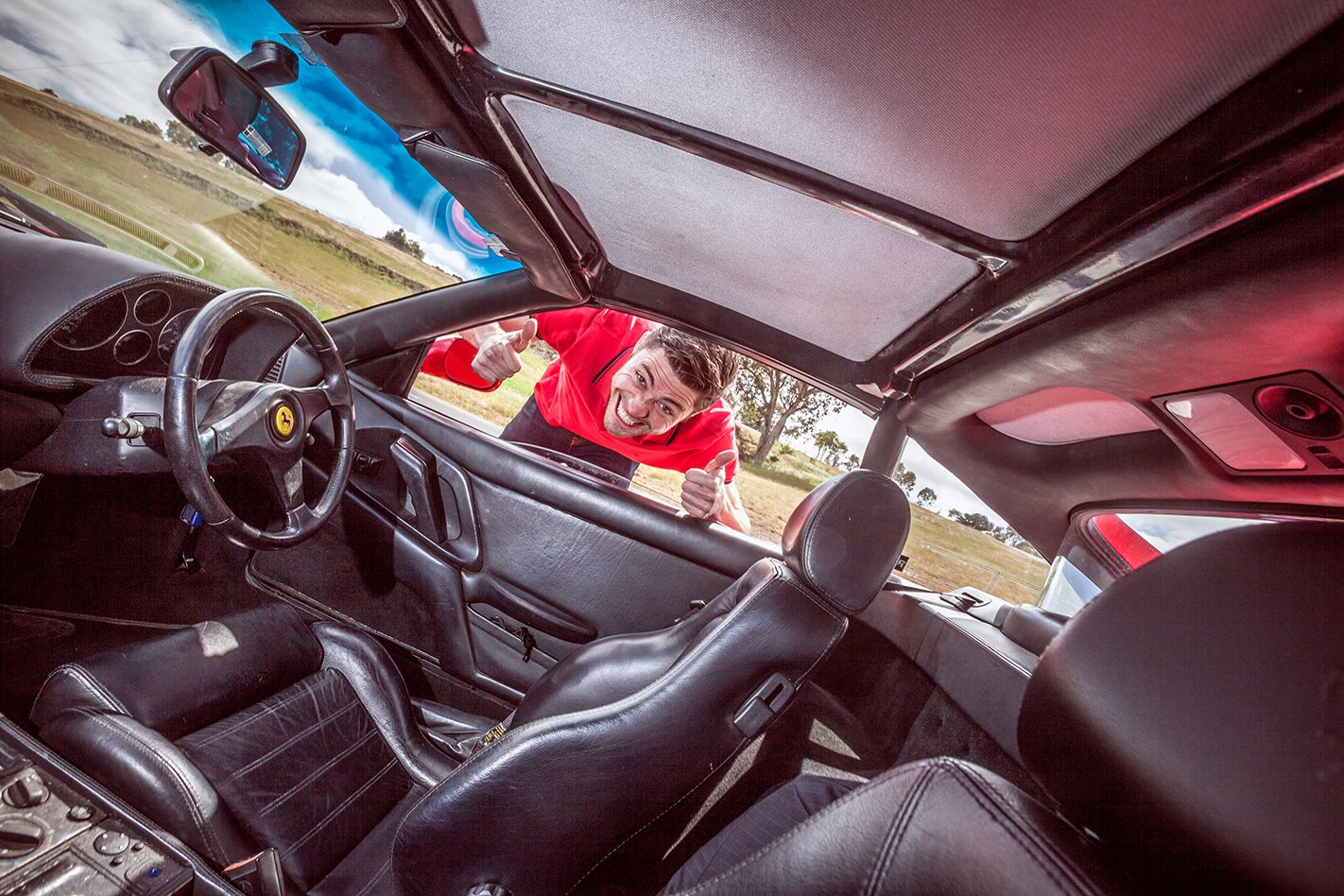 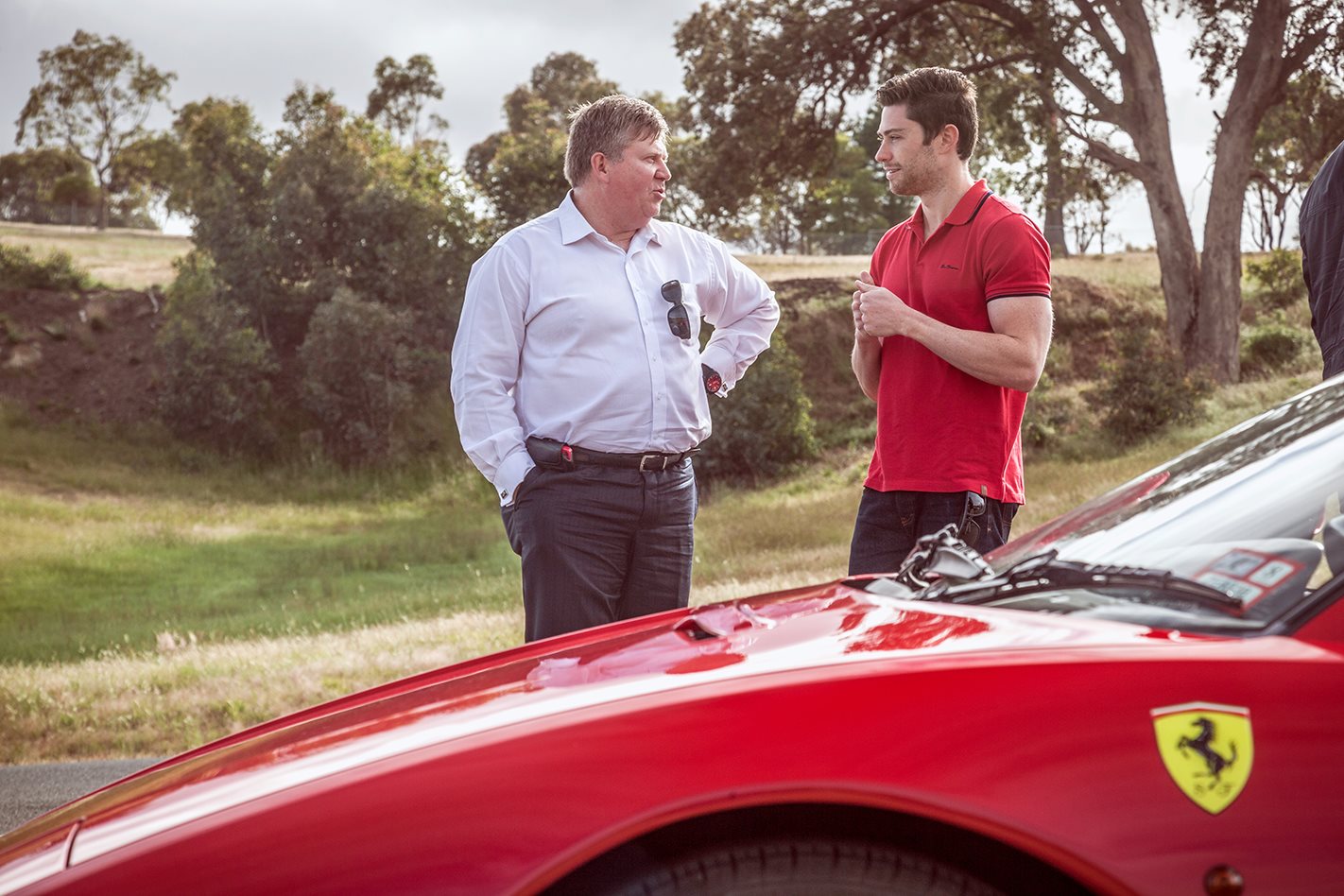