The hottest new metal arriving in the next 12 months

Upstarts, comebacks and fresh frontiers are the performance themes of 2016.

Unknown quantities such as Alfa Romeo Giulia, Ford GT and even Hyundai i30 N will challenge established players. Elderly icons will be replaced – Bugatti Chiron and Aston DB11 succeed Veyron and DB9 – while the downsizing trend will snare more models: Porsche wants us to love four-cylinder Boxster/Cayman, AMG a 4.0-litre E63 and Ford a four- rather than five-cylinder Focus RS. Quicker models are also arriving fast, with that hot-hatch delivering 4.7sec 0-100km/h for $51K, BMW M2 clocking 4.3sec for sub-$100K, while Audi TT RS could do 3.5sec for $150K. 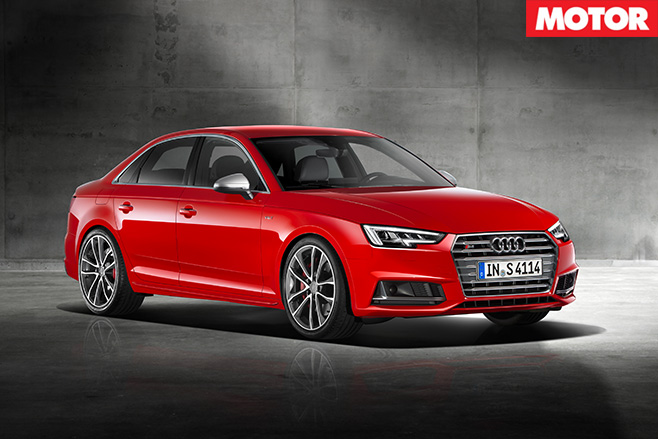 TIMES ARE literally a-changing when a 3.0-litre turbocharged V6 sleeper can match the 4.7sec 0-100km/h claim of a 4.2-litre V8 RS4. The S4 drops 75 kegs to 1630kg compared with the last one, so these sedan and Avant stealth operators (note quad exhaust, 19s, 25mm-lower ride height) should be sweeter dancers too.

Up to 85 per cent of drive can go to the back wheels and an optional centre diff then portions between them. Late-2016 arrival and $100K pricing leaves room for RS4 the following year – it’ll trade atmo eight for boosted six, too, so farewell revs and hello M3-rivalling outputs. 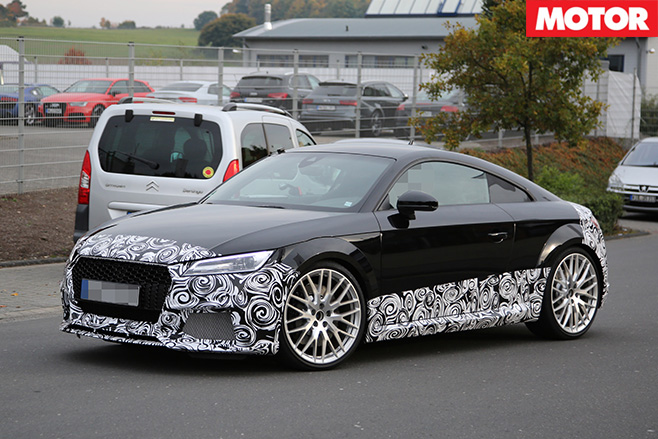 HOW LOW can they go? Zero to 100km/h times that is. Audi’s RS3 smashes the four-second barrier (see p42), so the new TT RS will dig deep into the threes.

Mules filmed belting around the Nürburgring confirm it shares the hyper hatch’s 2.5-litre turbocharged five-cylinder – deep, burly note the giveaway – though boosted outputs of around 300kW/500Nm will differentiate $80K hatch and $150K coupe.

Combine the extra grunt with less weight than the old model (it weighed 1450kg, already 70kg less than current RS3) and a seven-speed dual-clutch transmission and you have R8-baiting acceleration for less than half the price. Set for March’s Geneva Motor Show. 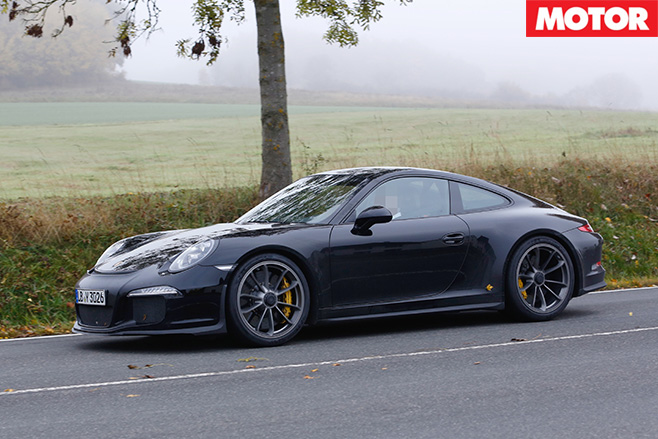 PORSCHE is going back to basics with the 911 R, essentially a plain-clothes GT3 with – hooray, purists shout – a manual transmission returning to mate with the 350kW/440Nm 3.8-litre flat six.

The wings disappear compared with its dual-clutch-only hardcore twin, although a duck-tail spoiler may be optional, while narrower rear tyres lower grip levels to make the handling more, let’s just say, accessible. 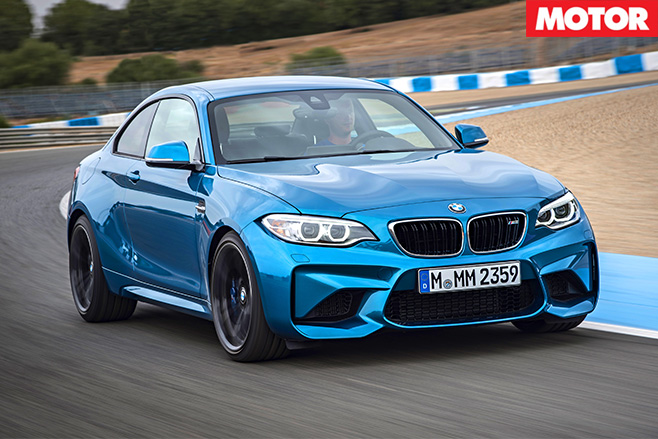 THE NUMBERS say hyper-hatch, but of course this BMW plays with six cylinders, rear-drive and manual (though a seven-speed dual-clutch is optional). We wouldn’t have the pumped 3.0-litre any other way, especially when it poaches titanium bits from the M4 and scores 500Nm on overboost.

As with that $150K sibling, there’s a rear diff with 100 per cent lock-up for sliding fun and a looser stability control mode. Filling the swollen guards are 19-inch Michelin Pilot Super Sports mounted on wider tracks than M235i. Should be a hoot and almost a bargain at $89,900 (manual) or $99,900 (DCT with extras). 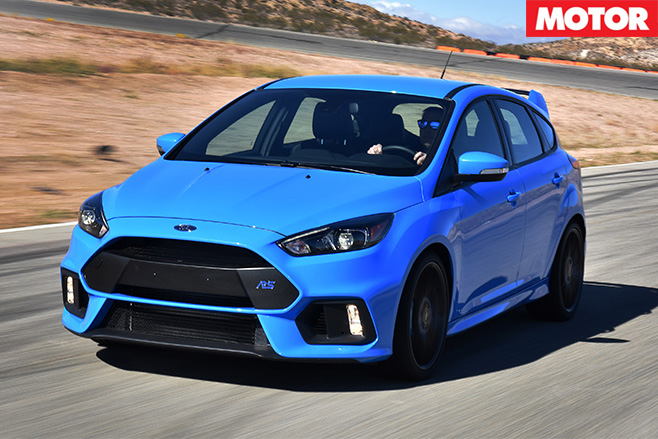 FOR ANYONE with veins of Castrol and wallets of racing-lite spec, the Ford Focus RS is the most anticipated car of next year. Angry-shark looks are a front for the 2.3-litre turbo four-cylinder that delivers 440Nm from 2000-4500rpm and another 20Nm on 15-second overboost before a 6800rpm cut-out.

It belts from zero to 100km/h in 4.7 seconds, even using that old-fashioned thing called a manual transmission, while Ford promises the exhaust crackles more than pork emerging from an oven at Christmas.

If it’s all sounding like a dreamy gift from Santa so far, note the all-wheel-drive hyper-hatch also scores a mode that “allows controlled oversteer drifts” (see feature pXX). Torque vectoring can sling 70 per cent of drive rearward and then 90 per cent to a single wheel. It seems Ford has read every driving enthusiast’s wish list and we can’t wait to throw it up against rivals next year.

While the ingredients used to create this fast Ford mimic the AMG A45 and Audi RS3 premium crew, the $50,990 Focus undercuts both by almost $30K and is priced to compete with Renault Megane RS 275 and Volkswagen Golf R. Posh engineering with peasant interior may be the neat summary. 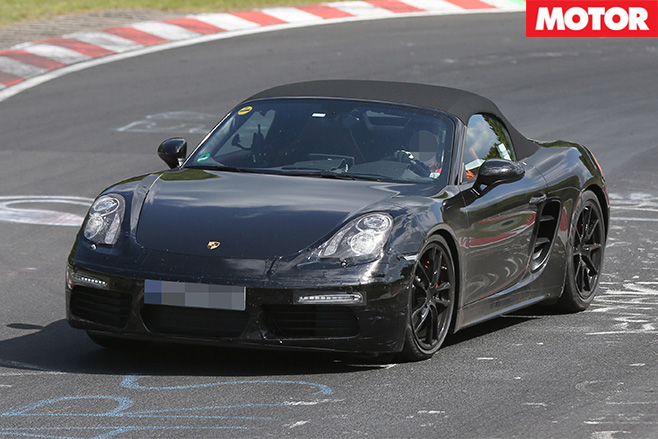 PORSCHE wants us to accept a turbocharged four-cylinder sports car so much that Boxster and Cayman will adopt a 718 prefix referencing the race-winning four-pot Porker from the 1950s.

There’s no need to play the heritage card, because the 225kW/360Nm 2.0-litre and 254kW/400Nm 2.5-litre boosted fours are modern units up on the 2.7- and 3.4-litre atmo sixes they replace. Boxster will come first at Geneva in March, with Cayman to follow at Beijing in May. 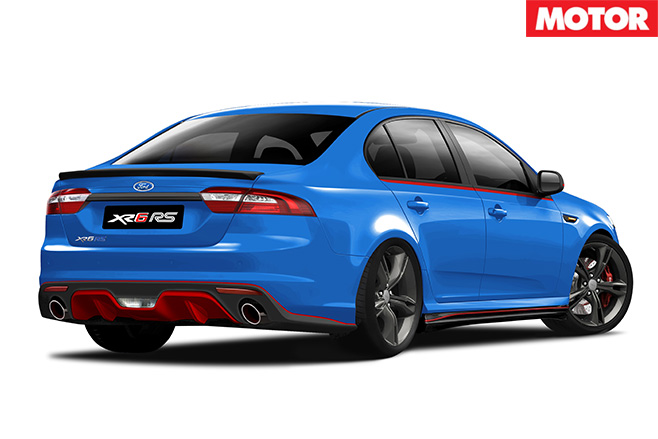 More defunct FPV models will become cheap-as-chips Falcon grades as the large sedan heads for a late-2016 cull. First the XR8 seagull-swooped a blown V8; now the XR6 Turbo will fly away with the F6’s 310kW/570Nm turbo six tune.

Ford is bothering the bin for the better when it means a rise on the 270kW/533Nm outputs of the $43,490 standard model. Limited edition Sprint badging is all but confirmed to revive a 1990s special, while the V8’s chassis spec (275mm rears, bigger brakes, Sachs dampers, 45 per cent-stiffer springs) will migrate to the turbo for the first time. Reheating never tasted so good. 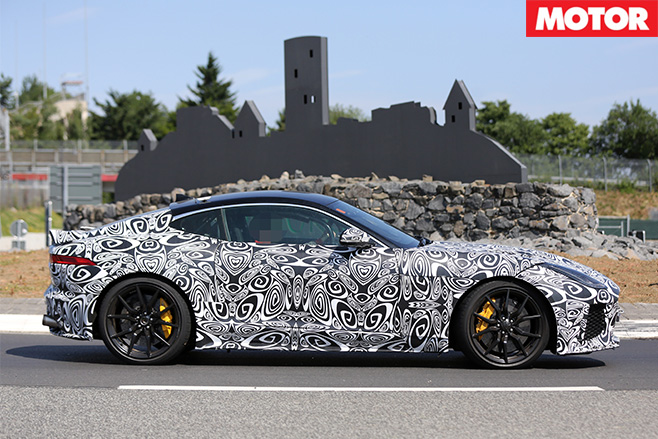 This Special Vehicle Operations version of the F-Type will go like a cat that’s had a Rheem explode over it. The 5.0-litre supercharged V8 will shift to around 600hp/447kW and 700Nm, up from 404kW/680Nm in the frankly already maniacal F-Type R.

The zero to 100km/h sprint will tumble from 4.1 seconds well into the threes, especially after noting the expected weight-loss measures previewed by the Project 7 concept. Seats, sound deadening and brakes are all set for shredding. Spy photos fail to hide the aggressive aero, ceramic discs and ducktail spoiler that cap off this $300K-plus fastest Jaguar ever. 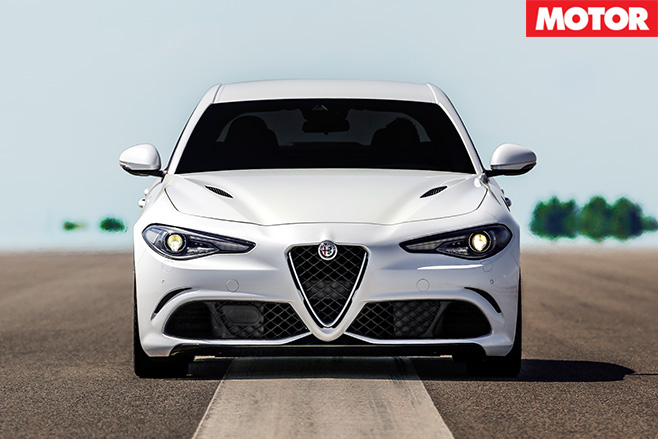 Quiet Italian is oxymoronic, so it’s no surprise this Ferrari-derived 2.9-litre twin-turbo V6 Alfa Romeo sedan shouted from rooftops about its seven minute, 39 second Nurburgring lap time – eclipsing a BMW M4 by 13 seconds! Engineers of the Giulia QV have since quietly muttered mamma mia, because this 1524kg, 377kW/600Nm four-door is reportedly delayed due to suspension issues.

Apparently the set-up was too stiff … as in for a racetrack. With 50:50 weight distribution, active aerodynamics and monster brakes and tyres, it’s still not hard to be excited by this 3.9sec 0-100km/h beast, which is due for a mid-2016 overseas launch. 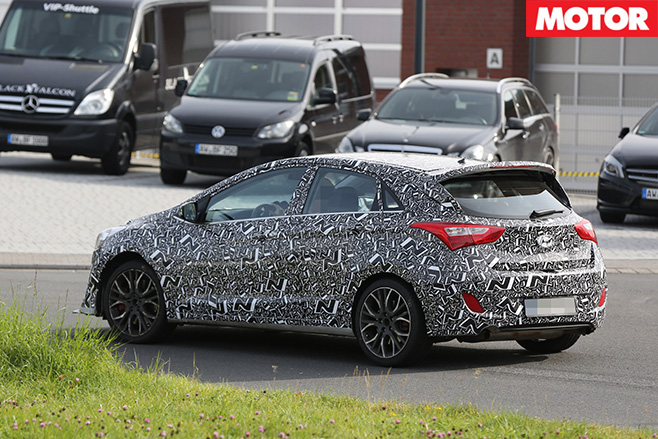 Think AMG, RS and just after M comes ‘N’ – Hyundai’s official performance division announced in 2015. Expect a 2.0-litre turbocharged engine for the i30 N hot-hatch, as previewed by the mid-engined Veloster RM15 Concept that delivers 221kW and claims 4.7sec 0-100km/h.

Hyundai knows it can’t stuff up its first N model, so it has casually strutted in and built its own complex at the Nurburgring. It also doesn’t want to merely challenge the Golf GTI but also the Golf R. These guys may seem serious, but we hope the new-gen i30 due late next year will be fun in flagship N spec. 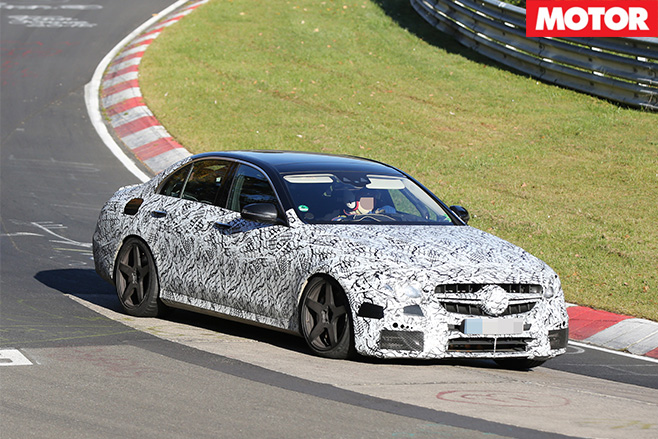 Apparently the new E63 will be the biggest step forward in fast E-Class history. The first choice of drug-runners scores a lighter platform and the first application of a new powered-up 4.0-litre twin-turbo.

Based on the 375kW/700Nm C63 unit, the E63 will leap towards the 430kW/800Nm outputs of the existing 5.5-litre model. All-wheel drive with right-hand drive will likely rule out burning just the rears, but AMG promises its AWD system will slide. We can hope. 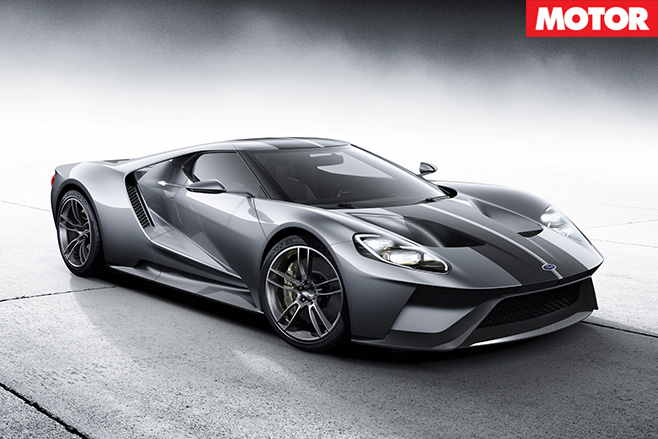 Promising 450kW-plus from a 3.5-litre twin-turbocharged Ecoboost V6 engine linked to a seven-speed dual-clutch transaxle, the new Ford GT will be bloody quick.

Yet the engineering seems intelligent, too, with aluminium subframes front and rear, and carbonfibre body panels and passenger cell reducing weight and producing one of the best power-to-weight ratios of any car.

Huge scoops and diffusers are the fixed aero to match active components including adjustable spoiler, while huge carbon ceramics sit behind the 20s. 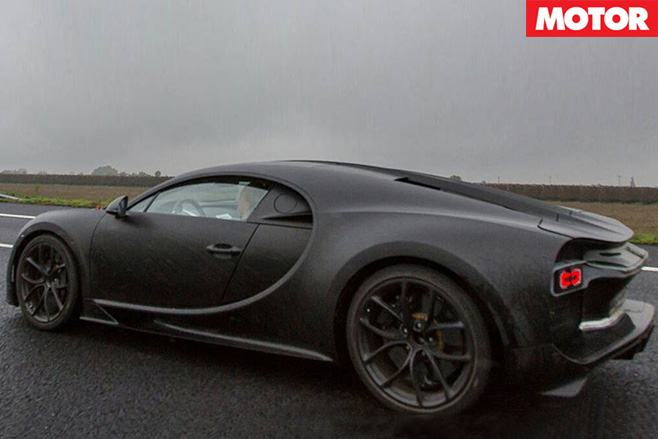 If nothing succeeds like excess, then take this 2.3sec 0-100km/h Veyron successor to its 465km/h top speed just to make sure.

The Chiron brief was to, ‘make the best significantly better’ while hopefully making Bugatti a buck this time. The expected 1.3 million Euro pricetag is up by around 900,000 Euro. 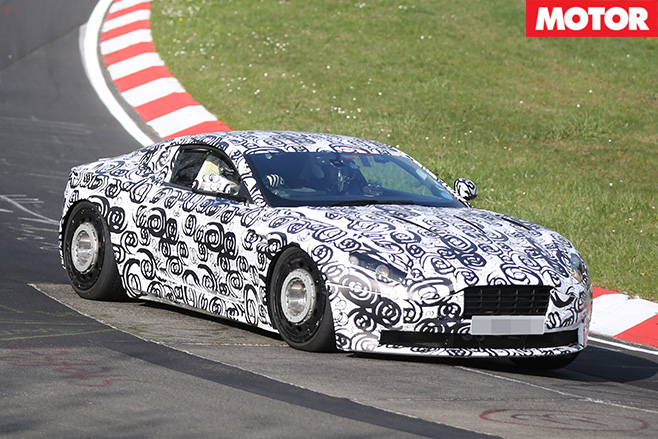 Aston Martin’s model range is as withered as a poplar in a London winter, but it promises that spring starts with the DB11. Okay, so it only overhauls the chassis of the ancient DB9, but plenty of carbonfibre is promised, as seen in the Vanquish and One-77.

Tauter, lighter suspension will also aim to curb the 1785kg mass of the current coupe, while an AMG-sourced 4.0-litre twin-turbo V8 will help shed both kilos and price, which is expected to lower slightly from the $350K DB9.

Aston Martin will then either borrow Affalterbach’s twin-turbo 6.0-litre V12 or retain its own 5.9-litre V12 and add turbocharging. Either way, forced induction is a given to increase performance and lower emissions.

An eight-speed automatic will help, but even with that ratio count a 424kW/630Nm Vanquish chugs 12.8L/100km – the DB11 will need to ease up on the juice. Spied interior shows Mercedes-Benz will supply the infotainment system and safety technology for the DB11, areas where Aston falls flat on its handsome face.

Conversely, the brand’s styling strength may make this the sexiest coupe of next year. Our eyes will judge at the Geneva motor show in March, with drives of the lighter, all-turbo DB11 to follow.